Hands off! This book is mine! Ownership inscriptions in Hebrew manuscripts

Making notes in a book in not always an act of vandalism. Sometimes it is an act of caring. I often put my name in my own books before lending them. And I am not the only one. Manuscripts were held dear by their owners. A good number of inscriptions bear witness of the care patrons took to ensure the safety of their precious books. Just like Jewish scribes, Jewish owners also developed set phrases to make their marks.
"לעולם יכתוב אדם שמו על ספרו שמא אחד מן השוק יבא ויאמר זה הספר שלי לכן כתבתי שמי..."
[People sign their books from the beginning of time lest someone come from the market and say ‘This book is mine’, thus I have written my name …] 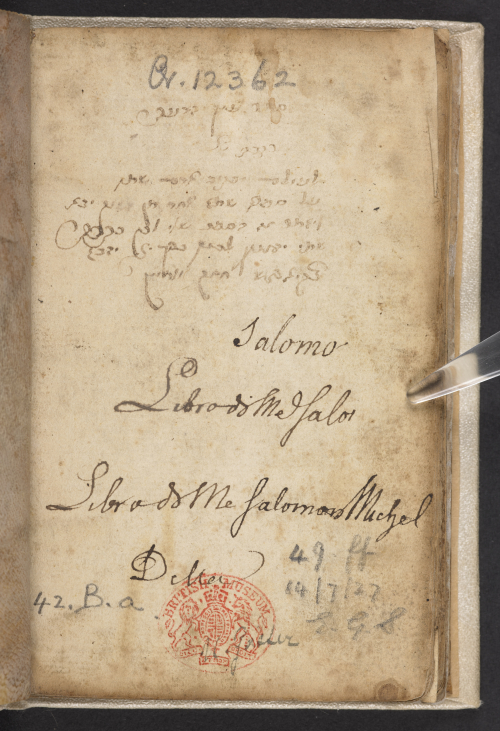 This is one of most popular phrases. Why people from the market? A marketplace was seen as a gathering place for strangers, idlers, and perhaps even rascals. Owners were concerned that such suspicious characters would claim their precious books. The owner of an 18th-century Passover hagadah expresses his opinion about such false claimers very explicitly:
"לעולם יכתוב אדם שמו על ספרו שמא יבוא ר' חמסן ור' גזלן מן השוק יאמר שלי הוא."
[People put their name into their book lest Rabbi Robber and Rabbi Thief come from the market and say ‘It is mine’.]

The owner of a halakhical miscellany composed an entire poem to declare his right to possess the book with a warning at the end:

[Whoever finds this book, be he wise or a fool, quickly return it to me in accordance with my wishes,
And take his money out of his pocket, as I did when I wanted it: I paid for it, and then I took it.
I have seen people who bought books not with money but only with their five fingers, thus I wrote my name on [this book] lest someone come from the market and bring me trouble, [because then] I will tell him to scram.] 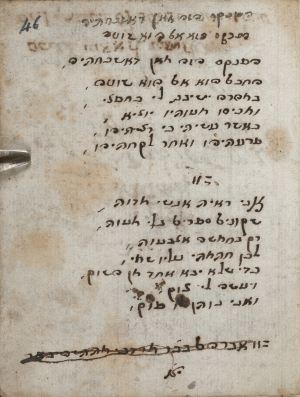 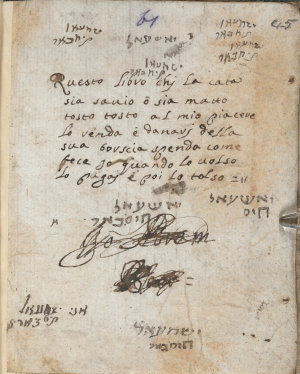 As you can see, the owner wanted to make sure that his message gets through to whoever tries to take his book, so he added the first part of his little poem also in Italian on the other side of the opening:
“Questo libro chi la cata sia savio o sia matto tosto tosto al mio piacere lo renda e danari della sua borscia spenda come fece io quando lo volso lo pagai e poi lo tolso”
[Whoever takes hold of this book, be he wise or be he foolish, quickly quickly return it in accordance with my wishes, and spend coins from his purse as I did when I wanted it: I paid and then I took it.]

The first stanza is somewhat obscure both in Hebrew and in Italian. A possible interpretation is that if someone gets hold of this manuscript, they should return it to the owner without hesitation, and buy one for themselves.

Such Italian inscriptions in Jewish books are not something unique. In the British Library collection, there is a large number of Italian Jewish manuscripts, and they often contain notes by the owners in Italian. These notes are very often put in rhyme. Raffael Vita inscribed the following little verse into his manuscript:
“Questo libro e di carta chi è orbo non lo quarda. Se piace a qualcheduno se ne vada comprar uno com' ho fatto ancor'io questo libro è mio Raffael Vita …”
[Paper was used to make this book; those who are blind cannot look. Whoever likes and covets it must buy their own, just like I did. This one’s mine! Raffael Vita…] 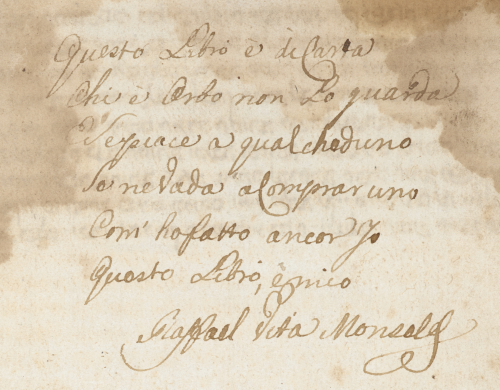 Almost identical inscription appears at the beginning of a 17th-century miscellany, but someone, probably a later owner deleted the name at the end:
“Questo libro è di carta che un … orbo non lo guarda se piacere a qualche uno si ne vada a comprar uno et per questo mi son sotto il mio nuome Jacob .. da …”
[Paper was used to make this book; those who are blind cannot look. Whoever likes and covets it must buy their own, just like I did. And this is why I have my my name here Jacob….of …] 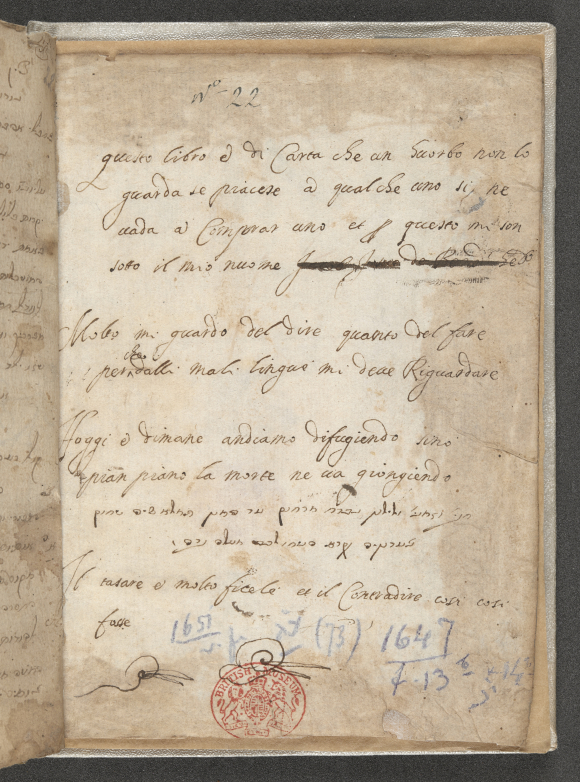 Another popular rhyme, used not only by Jewish, but also by Christian book owners, was a note in case the book would get lost:
“Se questo libro mai se perdesse e il nome del padrone non si sapesse io che morire sono nato graziadio et angeli Sacerdoti son nominato. Reggio 12 aprile 1767”
[If this book ever gets lost and the name of its owner is not known, I who was born to die thank God and the angels Sacerdoti is how I am called. Reggio 12 April 1767.] 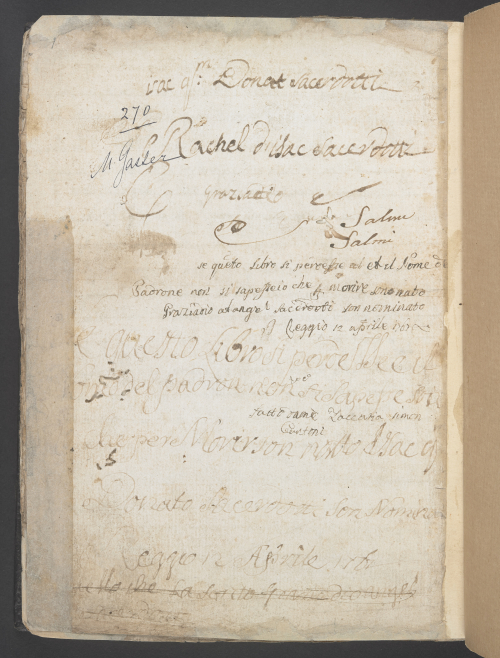 As you can see, more than one member of the Sacerdoti family left their mark on this page.

The owner of a 16th-century collection of commentaries wanted to use the same rhyme, but for some reason he left the note unfinished. The most important thing - the name - is missing!
“Se questo libro mai se perdesse e il nome del padrone non sapesse che lo trova che lo rende….”
[If this book ever gets lost, and the name of the owners is not known, whoever finds it, whoever returns it...]

Collection of biblical commentaries and other works. Italy, 1535. British Library, Or 9155, f. 2r

If you decide to compose a short poem to ensure that everyone knows this book is yours, do not forget to add your name at the end! Otherwise you might never get it back!

Posted by Annabel Gallop at 2:41 AM