Until the donkey ascends the ladder: Hebrew scribal formulae

Johanan, having copied a manuscript in Tivoli in 1514 in neat Sefardi script, describes himself in the colophon as “the smallest of the disciples, who laps up the dust of the feet of the sages, the servant of their disciples… Johanan ben Jacob Siracusi.” 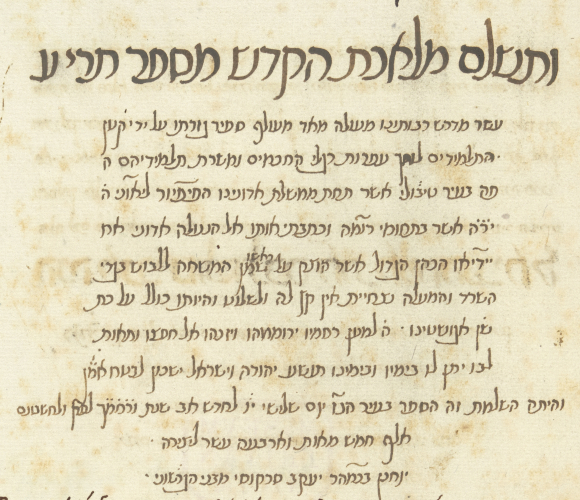 A colophon, meaning “final point” in Greek, is a note that provides details about the production of the manuscript such as when and where it was copied, who copied it for whom, and so on. Jewish scribes often used certain set phrases in their colophons; “the dust of the feet of the sages” was one of them. The expression, portraying the scribe as a humble, insignificant fellow, probably comes from the Mishnah: “let thy house be a house of meeting for the Sages and sit in the very dust of their feet, and drink in their words with thirst.” (Mishnah, Pirke Avot 1:4)

The phrase became popular as an expression of humility in Jewish rabbinical literature, and it appears also in Hebrew colophons from various eras and lands. Here is another example from 17th-century Yemen: a certain Hayyim on the Mishnah calls himself “the smallest of the scribes, dust of the feet of the sages, the young Hayyim ben Shalom ben David ben Isaac ben Solomon ben Jacob al-Ḥagagi”. We should not necessarily imagine Hayyim as a young man, though. “Young” here is a synonym for insignificant or minute. Also, notice that humility does not prevent him from listing his ancestors back to five generations! 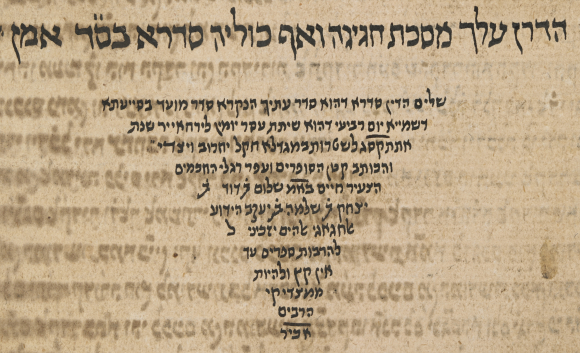 In 1476, another scribe uses a very similar phrase in his colophon: “I am the youngest among the disciples, who embraces the dust of the feet of the sages, Moses ben Masud ben Jacob…” 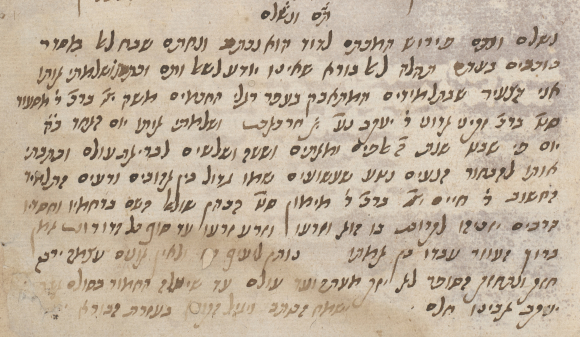 While humble, and insignificant, Moses also make sure that his work pays off: in exchange for his efforts he asked for protection against ill fate: “Blessed He who helps his servant… who gives strength to the tired … may no harm befall the scribe not now and not ever, until the donkey ascends the ladder that our father Jacob dreamt about.”

“Until the donkey ascends the ladder”: that is, never, since the donkey is not ever likely to climb up the ladder. This is another nice example of set phrases Jewish scribes used in colophons. It first cropped up in some 13th-century Ashkenazi (German) codices, and has in time developed into a very popular formula. “Be strong and strengthened, no harm befall the scribe, not ever, until the donkey ascends the ladder” writes Nehemiah ben Jacob at the end of a 14th-century Ashkenazi festival prayer book. 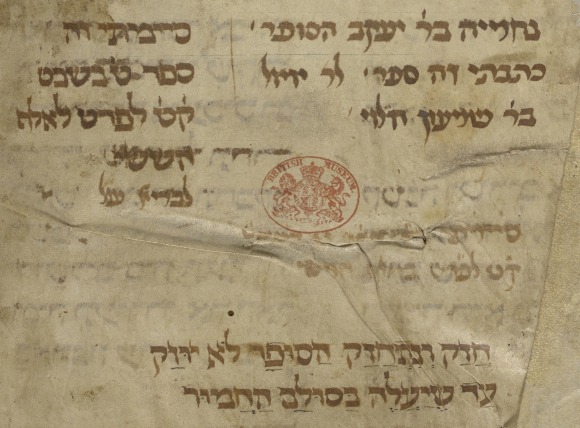 Another 14th-century scribe inscribed his colophon at the end of the carmina figurata – text written to form various shapes – here forming the word hazak, meaning ‘be strong’. His colophon, like many others, starts with the same word, hazak: “Be strong and strengthened, may no harm befall the scribe, not today and not ever, until the donkey ascends the ladder that Jacob our forefather dreamt about.” 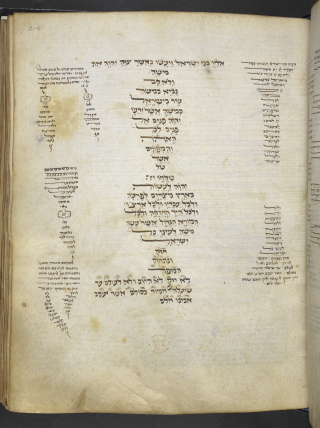 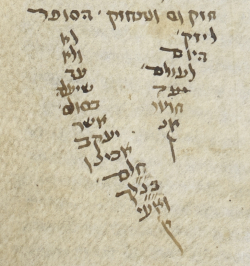 The second half of the rhyme refers to the biblical story of Jacob, who in a dream saw a ladder reaching the heavens with angels ascending and descending (Genesis 28:10-19). So what could be the connection between angels and donkeys? The Babylonian Talmud has an answer: “If the early generations are characterized as sons of angels, we are the sons of men. And if the early generations are characterized as the sons of men, we are akin to donkeys.” 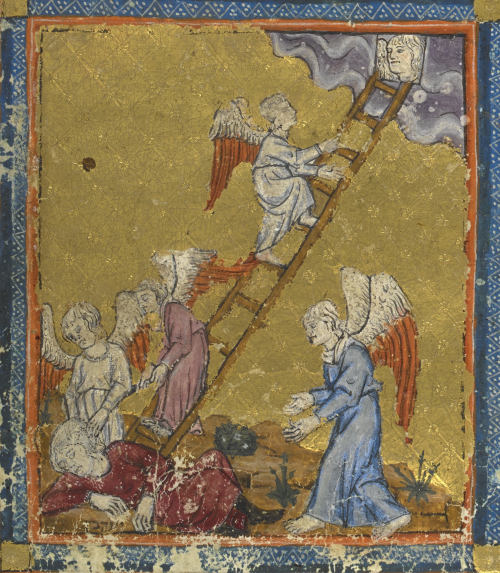 We can agree that while angels can ascend and descend between earth and heavens with ease, donkeys would have a much more difficult time.

There is another possible source of this phrase that has nothing to do with Jacob’s ladder, and it comes from a midrash (a type of biblical interpretation): “Four things were said by the wise: As the sack can be washed white, so knowledge can be found with the ignorant; when the donkey ascends the ladder, then you can find wisdom with fool; when the kid puts up with the panther, then the daughter-in-law can put up with her mother-in-law; when you find an entirely white raven, then you find a good woman” (Otsar midrashim, Hupat Eliyahu 139). The donkey ascending the ladder is thus a metaphor for impossibility or improbability.

In a 16th-century codex from Safed, someone crossed out the bit about the donkey in the colophon. Perhaps it did not seem appropriate or humorous for everyone? “I, Solomon Ezobi, the youngest among the disciples in the yeshiva of Safed … copied this book… be the will of God that no harm befall the scribe until the donkey ascends the ladder that Jacob our forefather dreamt.”

All of these colophons were from neatly executed manuscripts. The last example is less orderly, scribbled down by a more cursive hand: “This Birkat ha-mazon [Grace After Meals] is finished with the help of the Lord…. May no harm befall the scribe not today and not ever, until the donkey ascends the ladder that Jacob our forefather dreamed. Amen selah … I Joseph bar Gershon the scribe” 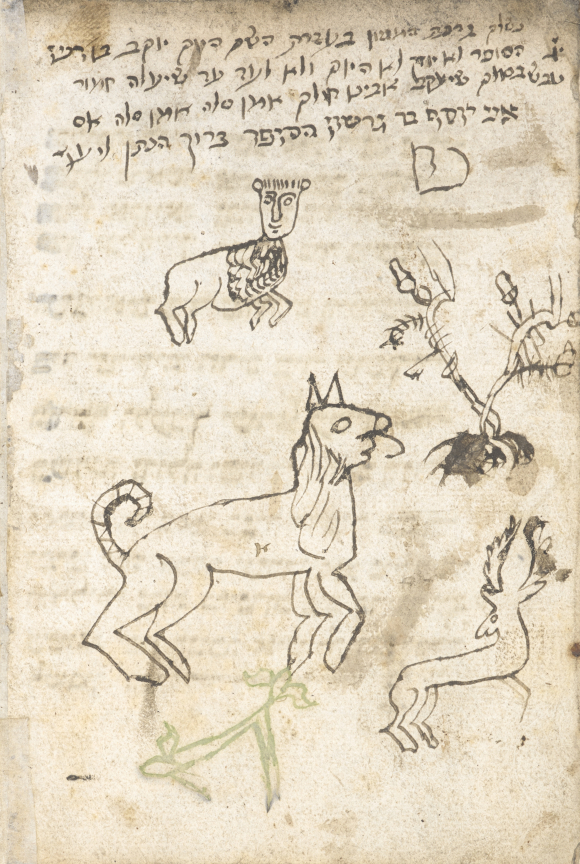 The doodles under the colophon seem to be added by the same person but they have nothing to do with donkeys or ladders. As far as I know there is only one manuscript with a little doodle depicting a donkey climbing a ladder held in the Biblioteca Ambrosiana, Milan (Cod. Milan. Nr. 7). Sadly it has not been digitised yet, but here is a reproduction of its reproduction! 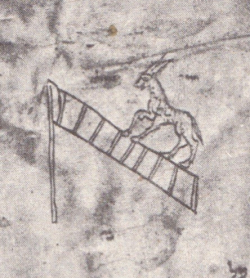 Composed by me, Zsofi in Shevat 5780. Be strong and strengthened,
may no harm befall the scribe, not today and not ever,
until the donkey ascends the ladder
that Jacob our forefather
dreamt about.