Today's guest blog is by Dr Roger Tol, former Head of the KITLV in Jakarta, and a specialist on Bugis manuscripts.

Mystical diagrams or amulets have always been very popular in Southeast Asia. In almost every local bookstore across Indonesia and Malaysia you can buy cheap publications called primbon which contain a great variety of texts, calendars, and mystical diagrams. By and large they are used to predict the future. Is this a good day for shopping? Or to marry? To harvest, to travel?  These diagrams go back a long time and you can find them in many Indonesian literary traditions. It is little surprise to find that we also come across them in handwritten documents from these traditions.

Still, it was  wonderful to see one such amulet pop up in a Bugis manuscript (Add 12360) from the Crawfurd collection in the British Library, which was recently digitised and made available online. 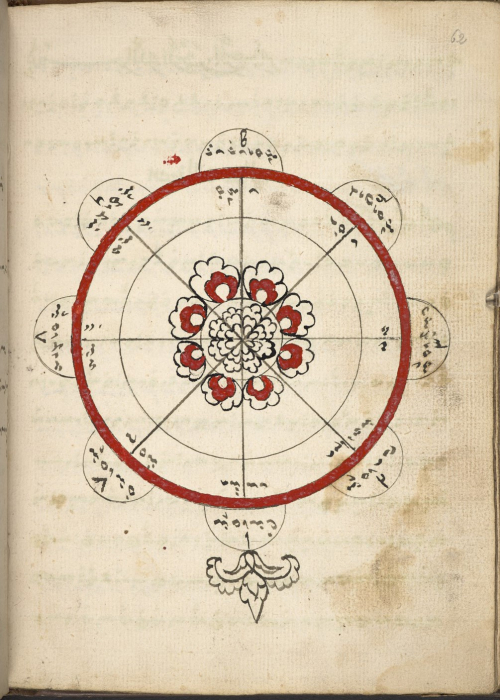 When I told Annabel Gallop that it was an interesting diagram, she informed me that she had discovered a very similar diagram in another Bugis manuscript, Add. 12372, from the same collection. Even more interesting! 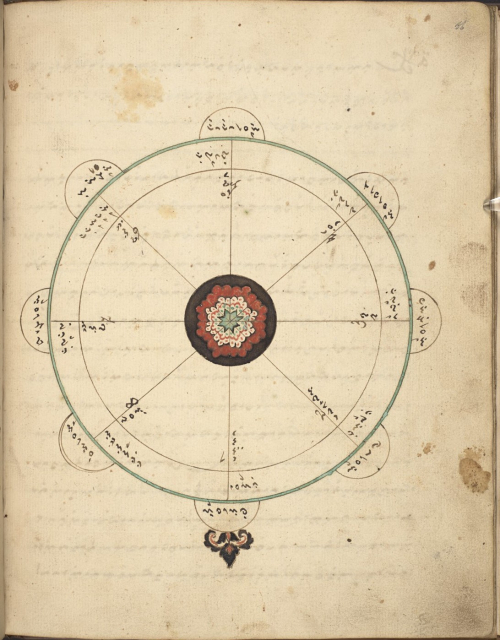 In both manuscripts we see a circular diagram like a wheel, divided into eight sections, with a flower in the middle resembling a rose window. Each section is numbered and has a few words in Bugis script. How do we read it? Where do we begin? Are there any reference sources? Yes, there are. We have good old Matthes’ publication on Bugis and Makassar amulets or kotika (1868) and two books on Malay magic which provide clues. It was Skeat who laid the groundwork in his Malay Magic of 1900. This is still a great read. More than a century later we also have the superb study on magical illustrations in Malay manuscripts which was published by Farouk Yayha in 2016, and this is an even greater read.

These books tell us how to read the diagrams and provide context, and Farouk in particular discusses animal days. Yes, animal days: each part of the diagram deals with a particular animal, except for number one, which is a wood day. So we have the following eight parts in our diagrams: wood day, tiger day, crocodile day, deer day, bird day, pig day, fish day, and dog day. The numbers (Arabic in Add 12360 and Latin in Add 12372) indicate the sequence of the days. We start with wood day, followed by tiger day, crocodile day, and so on. Their order is not accidental; at the very least there is an evident relation between animals on the opposite sides of the diagram: the crocodile versus the fish, the deer versus the dog, and the pig versus the tiger, while the bird relaxes in the tree.

How do you know what kind of animal belongs to a particular day? First you establish the date of the (Islamic) month, let’s say 18 Muharram. Then you start counting, beginning with the wood day and continue counting counter-clockwise until you arrive at 18, which turns out to be a tiger day.

Farouk shows us a few intriguing circular diagrams with actual drawings of the animals. A Malay one in particular is fascinating because it has the same shape as our diagrams and depicts the same animals save for one (Farouk 2016: 132). 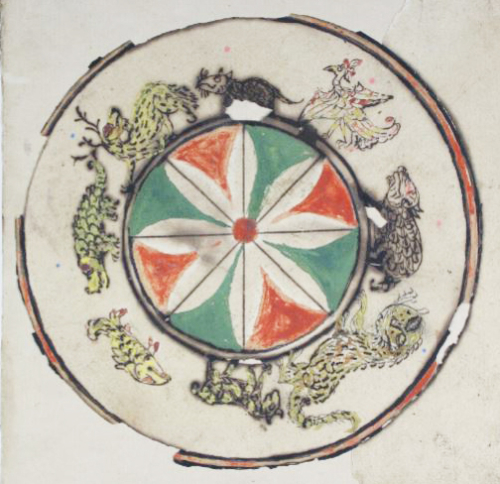 Back to our two Bugis manuscripts. They not only contain the same amulets, but also a complete and remarkable text preceding them, concerning divination corresponding to 30 surahs in the Qur’an (nos 2-31). However, a striking difference between the manuscripts is that Add 12372 also has an explanatory text following the amulet (ff. 66v-67v), shown below, which is lacking in Add 12360. 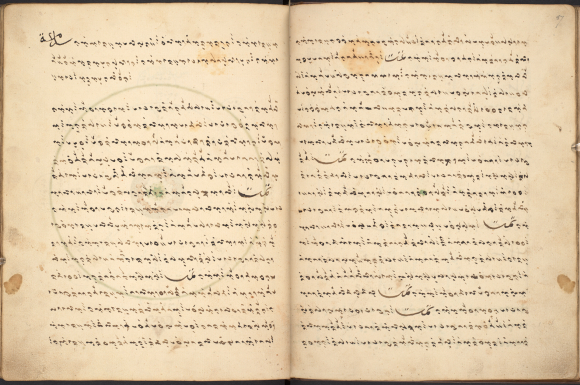 When we look at the two amulets themselves we see that both are well-drawn and have clear, neat Bugis writing. There are differences though. A major one is in the layout of the amulets with a bold and large central ‘flower’ in Add 12360 and a much smaller (and multi-coloured) one in the other manuscript, Add 12372. Also the amulet in Add 12372 has more informative text in the ring next to the green line: there it adds in each section the words ‘one night’, ‘two nights,’ up to  ‘eight nights’. The texts in the amulets are otherwise identical, though in different positions within the amulets. Interestingly in both amulets the sections are numbered, but in different ways and positions. Whereas in Add 12372 the numerals are written in the modern ‘Western’ way and placed inside the amulet, Add 12360 writes them as ‘Arab’ Arabic numerals in the outer sections.

So far so good, but what is the practical meaning of these diagrams? What do they tell us? To answer this question, we can turn to the explanation in Add 12372. This is what it says on f. 66v about the first two days, a wood day and a tiger day, in a free translation:

Greetings. We take a wheel with eight sections.
A wood day is a good day to weave cloth and also good to buy cloth. It is bad to go far away, but good to wage war. Bad to set sail because the rudder will shake. It is also bad to claim debts since these will not be paid soon. It is also a bad day for lending because you’ll never get it back. It is a good day to buy for relatives. Also good to buy animals. Bad to have a cockfight. End.
A tiger day is a very good day to marry a woman when she is a relative.It is also good for love. Not good for buying things since they will be eaten by fire or stolen. Also a good day to plant rice or other crop. End.

And then, surprise, surprise, and of very great interest, an ink drawing of a very similar kotika turned up in the Library of the Wellcome Collection in London. 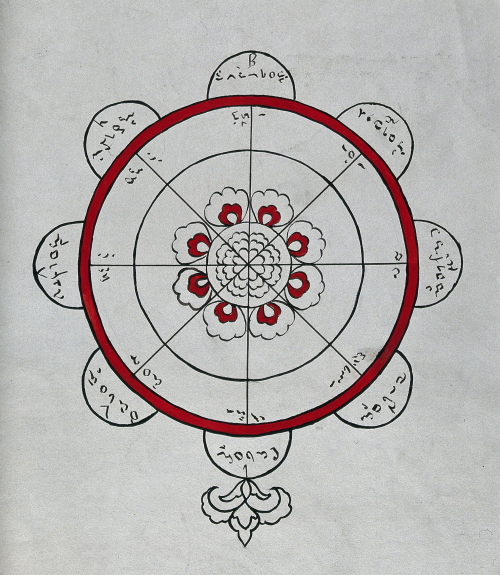 There is no doubt that there is a clear relation between these three diagrams. But what kind of a relationship? This is all food for some guesswork.

The date of the Wellcome Library diagram is not certain. The approximate date in the online catalogue is given as “1850-1910”, but an earlier date might be possible, as suggested in an email from Wellcome’s research team. That is because a possibly related drawing in the same folder is dated “Jan 05” which probably indicates 1905, but might also refer to 1805.

For our two diagrams from the Crawfurd collection we have a clear terminus ante quem – they were drawn before 1814, the year they were looted from the Boné palace. We see that both manuscripts are closely related and present very similar, although not identical, amulets and contextual information. The most striking differences between the two are firstly that Add 12360 does not contain the explanation of the amulet, and secondly that Add 12360 uses Arabic numbers in the diagrams whereas Add 12372 uses Latin numbers. Does this mean Add 12360 is the “original” and Add 12372 its copy? Not necessarily. There is also the possibility both manuscripts were not direct copies from each other, but were copied from another manuscript. That could explain easily the differences between the texts, and therefore I have a preference for this option.

Considering the layout and use of Arabic numbering, the Wellcome kotika is apparently a direct copy from Add 12360. Yet there are some differences between the two. The most important is the quality of the Bugis script which in the Wellcome amulet is noticeably inferior to the script in Add 12360. It seems the copyist was not familiar with this script. Another difference is right in the middle, in the ‘heart’ of the flower. Whereas the petals in the ‘original’ are less well matched, those in the Wellcome copy are neat and symmetrical. The flower ‘handgrip’ denoting the wood day is also different and shows a combination of the differences mentioned above: the lines are both straighter and simpler.

Summarizing, it seems likely there was an “original” Bugis diagram drawn in the 18th century, which was copied in two manuscripts and kept in Boné’s royal library until 1814 when they were taken by the British. Then, at some stage, maybe even after the arrival of the Crawfurd manuscripts in the British Library in 1842, a copy of the diagram in Add 12360 was made which ultimately found its way in the Wellcome Library.

The Royal Library of Bone: Bugis and Makassar manuscripts in the British Library (6 January 2020).