Mah Nishtanah? Why is Tonight different from all other nights? In celebration of Passover

Passover is a major Jewish Spring festival that has been celebrated annually since ancient times. It typically falls between late March and late April, and marks the Israelites’ liberation from Egyptian bondage through divine intervention, as told in the biblical Book of Exodus. The highlight of the Passover celebration is the reading of the hagadah.

The hagadah (plural hagadot), which literally means ‘narration’ or ‘telling’, is the ritual book used in Jewish households on Passover Eve, at a festive ceremony and meal known as the Seder (order).  In the Jewish Diaspora the Seder is conducted on two consecutive nights. 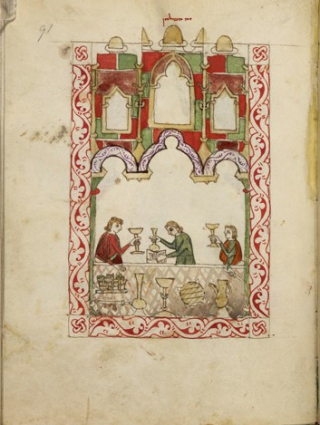 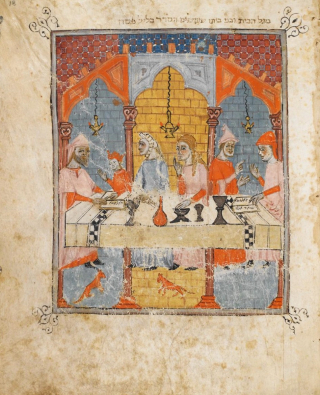 This is a book of remembrance and redemption, aiming primarily to teach the young about the continuity of the Jewish people, and their unswerving faith in God:  “And you shall explain to your son on that day: It is because of what the Lord did for me when I went free from Egypt” (Exodus 13:8).

Written chiefly in Hebrew with Aramaic additions, the hagadah is a mosaic of biblical extracts, rabbinical discussions, legends, symbolic foods, prayers, Psalms and songs that were probably assembled as early as the 2nd century CE, evolving gradually into the set pattern of fifteen steps that is known today. 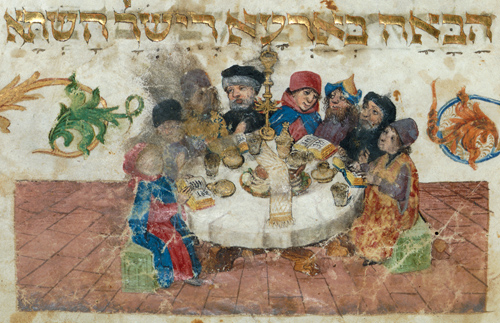 Its enthralling contents and the fact that it is used at a domestic ceremony attended also by young children have been a fertile ground for artistic creativity and expression since medieval times.  Over the centuries, the hagadah has thus become one of the most endearing texts to Jews everywhere, and equally one of the most frequently decorated texts used in Jewish practise. The earliest extant illustration in a hagadah appears in an 11th-century manuscript fragment found in the Cairo Genizah.[1]  The illustration[2] depicts the maror (bitter herbs) a mandatory food eaten at the Seder. 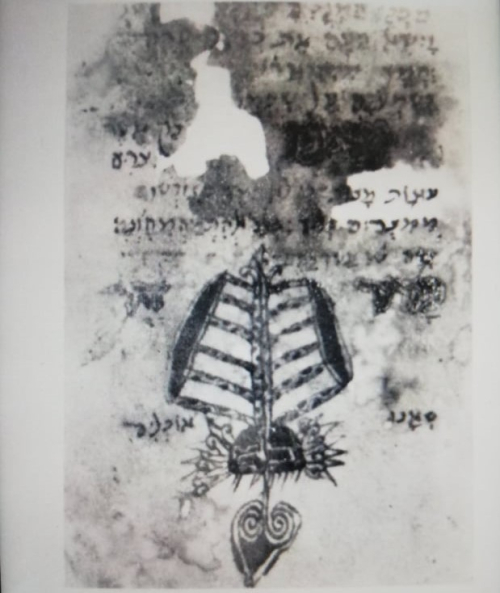 Throughout the 14th and 15th centuries, richly illuminated manuscripts of the Passover narrative were produced in limited numbers in various European centres.   Of the surviving hagadah manuscripts the finest and most luxurious specimens were created in Spain, particularly in Catalonia, in the 14th century.  The Brother and the Sister hagadot in the British Library’s Hebrew collection are a good case in point.

The images seen here originate from these two splendid artefacts.  They contain the hymn Dayenu (It would have been enough), a Passover thanksgiving hymn that extols God’s magnanimity towards the Israelites. Its decoration is often encountered in other medieval Spanish Passover ritual books. The text is flanked by ornate vertical bands created by the repeated words ilu (if) and ve-lo (and if not) placed on filigree grounds. 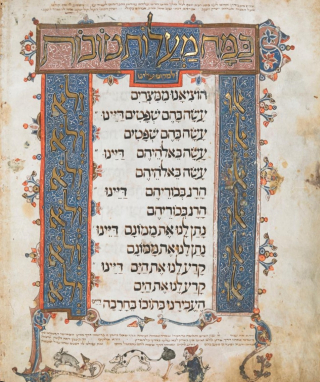 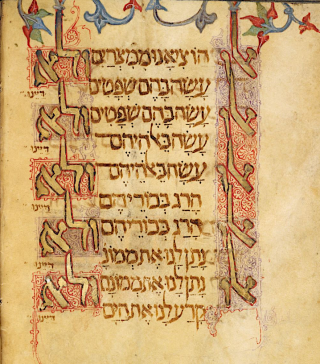 The exact figure of extant illuminated hagadah manuscripts is difficult to determine, nonetheless, it can be stated with some degree of certainty that a small number date from the Middle Ages, whilst the majority are 18th century artefacts.

The 18th century witnessed a revival of Hebrew manuscript art, which has been linked to the emergence of a wealthy class of central and northern European Jews. Influenced by trends prevailing in their Christian milieu, these well-to-do patrons began to commission illuminated Hebrew manuscripts for everyday use and special occasions, hagadot being particularly popular.  This phenomenon, which some scholars have named the ”Jewish Renaissance,” was made possible by the formation of a school of professional scribe-artists, chiefly from Bohemia and Moravia, who travelled around Europe in search of commissions. 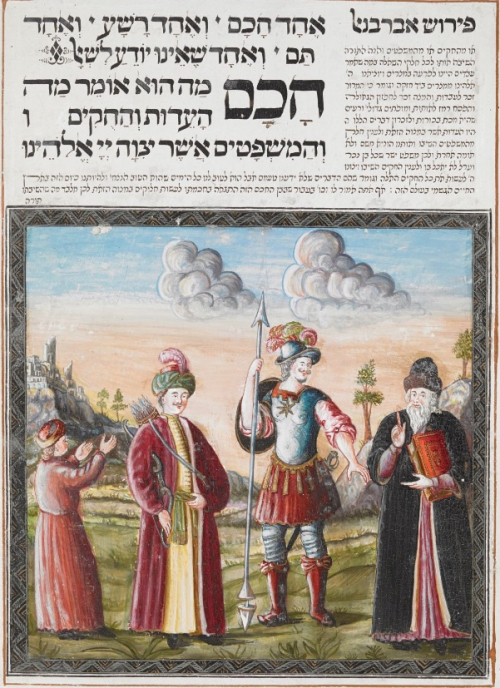 One of the most prominent Moravian scribe-artists of that period was Joseph ben David Leipnik, active in Hamburg and Altona.  Between 1731 and 1740 he created some thirteen hagadot. Featured here are miniatures from a beautifully wrought specimen Leipnik completed in 1740, now kept in the British Library’s Hebrew collection. The manuscript is called the Sloane Hagadah after its former owner, Sir Hans Sloane (1660-1753), founder of the British Museum.  Like other 18th century Passover ritual books, the illuminations in this one were modelled on the copper engravings in the 1695 and 1712 printed editions of the Amsterdam hagadah. 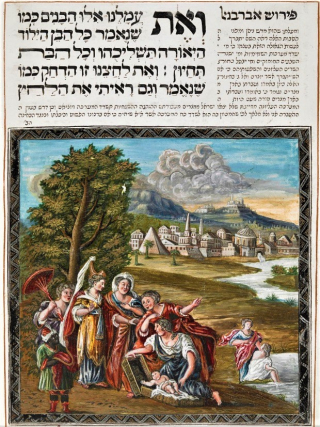 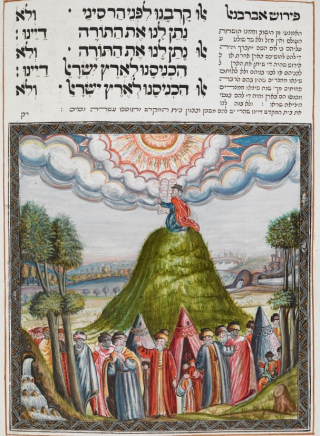 The Passover ceremony is a major festive celebration for Jews everywhere. Families and guests gather round the beautifully set Seder table, to recite the hagadah, sing hymns and consume the traditional symbolic foodstuff arranged on special Seder plates.

Two of the obligatory foods eaten on Passover eve are matsah (unleavened bread; knows also as ‘poor man’s bread’) and maror (bitter herbs). The former symbolises freedom. It is the unbaked bread dough the Israelites took with them when leaving Egypt hastily. The latter represents the harshness of the Israelites’ slavery endured under Pharaoh.  The matsah we partake from nowadays is a flat, cracker-like bread. Vegetables used most commonly as bitter herbs are horseradish and romaine lettuce. 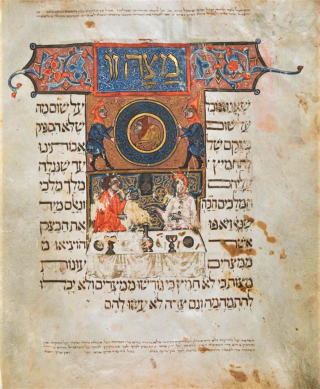 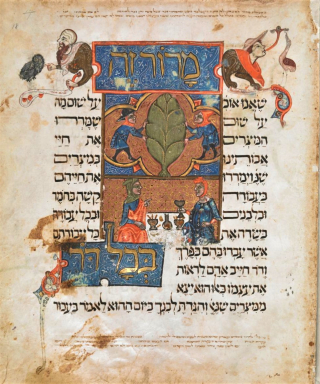 Another essential food consumed at the Seder ceremony is haroset (sweetmeats) which is symbolic of the mortar and bricks the Israelite slaves used to build Pharaoh’s cities. Traditionally this is a sweet relish made of fruit, chopped or ground nuts and sweet red wine. Over the centuries, Jewish communities from around the world have developed their own versions of haroset.  Countless recipes exist using a variety of local ingredients, but many still are closely guarded secrets. 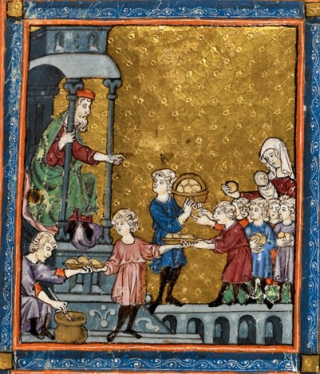 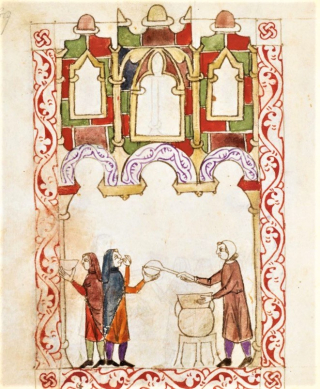 A while ago, I discovered an interesting recipe for making haroset in an 18th century manuscript held in our collection. I found it rather intriguing that a manuscript of liturgical poems for circumcision contained instructions and ingredients for making Passover sweet relish. If a concealed connection does exist, it has yet to be unveiled. In the meantime, I am delighted to share this recipe with you.

Written in Ladino (Judeo-Spanish) in Latin characters, I presume it was most probably used yearly by the previous anonymous owner/s of the manuscript, and must have been passed down by relatives or friends with Sephardi roots (from Spain or Portugal). The ingredients used in it point strongly to the rich culinary tradition of Spanish Jews. 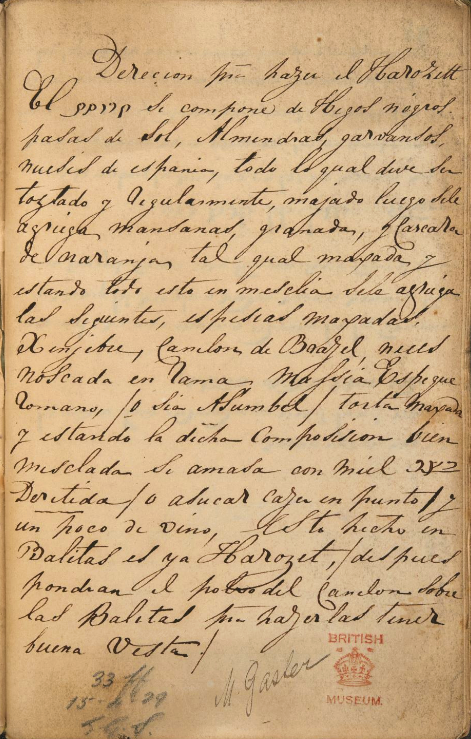 My translation is only partial.  Since some of the ingredients and instructions were hard to make out, they have been omitted and replaced by dots.

The haroset is made from:

These are all toasted (toztado) and crushed (majado), then mixed well together with apples (mansanas), pomegranates (granadas) and orange rind (cascaron de naranjas)…

To  this mixture add spices (especias)…… ginger (Xinjibre), cinnamon (Canelon de Brazil), nutmeg (Nuez moscada)……..  If preferred, the composition can be blended with kosher honey (miel) melted (deretida) with sugar and a bit of wine (un poco de vino).  The mixture is shaped into small round pellets/balls (balitas) that have been rolled in powdered cinnamon……The pellets can be made in advance and kept.

Our readers and followers would be pleased to know, that all the manuscripts featured in this blog have been fully digitised as part of the major Hebrew Manuscripts Digitsation Project undertaken by the British Library, 2013-2020. They are freely accessible on the Digitised Manuscripts website.

The Sloane Hagadah is one of the star objects in the Hebrew Manuscripts: Journeys of the Written Word exhibition.  Due to the current global pandemic, the opening of the exhibition scheduled for March 2020 has been deferred until further notice.

The Ashkenazi Haggadah: a Hebrew Manuscript of the Mid-15th Century From the Collections of the British Library, notes on the illuminations, transcription and English translation by David Goldstein (London: Thames and Hudson, 1985) [facsimile].

Katrin Kogman-Appel, ‘The Picture Cycles of the Rylands Haggadah and the so-called Brother Haggadah and Their Relation to the Western Tradition of Old Testament Illustration’ Bulletin of the John Rylands University Library, 79, 2 (1997), 3-20.

[1] A storeroom of discarded religious and secular Jewish documents that had been preserved in the attic of the Ben Ezra Synagogue in Fustat (old Cairo) for nearly one thousand years.  The exact whereabouts of this particular fragment are currently unknown. The fragment might have been owned by David Kaufmann a famous 19th century Jewish scholar who held the chair of philosophy and religion at the Rabbinical Seminary in Budapest.

[2] This Genizah fragment was published by David Kaufmann, “Notes to the Egyptian Fragments of the Haggadah,” Jewish Quarterly Review, X (1898).  The fragment and illustration were also published in: