The East India Company’s charter of incorporation, dated 31 December 1600, provided the Company with a monopoly of all English (and later British) trade east of the Cape of Good Hope. Dutch voyages to Asia in the closing years of the sixteenth century had encouraged expectations of high profits to be made from the spice trade, and on 13 February 1601 the English East India Company’s first fleet of four ships sailed from Woolwich, bound for the pepper producing islands of Java and Sumatra. 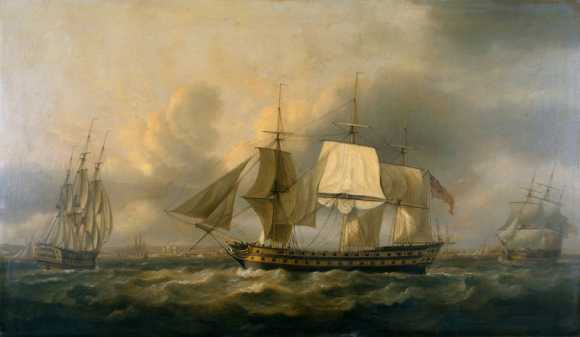 Between 1601 and 1614, eleven more Company fleets were sent to Asia. Each one of the fleets operated as a ‘separate stock voyage’, meaning that they were separately financed, kept their own accounts, and paid their own dividends, before the separate voyages were replaced by a single joint stock in 1614, which provided continuous financing for annual sailings. By the early 1800s sailings had reached a peak of forty to fifty ships per year. 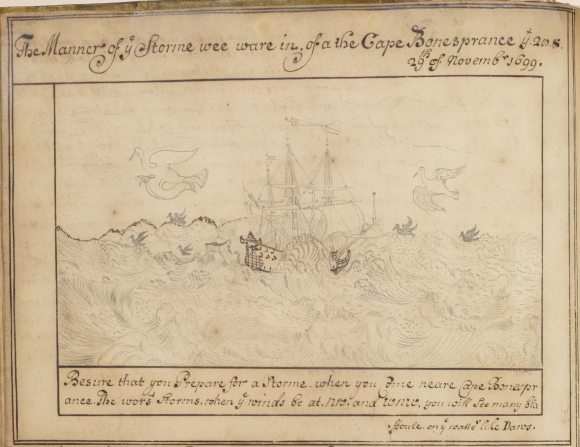 A sketch of the ship Rooke (or Rook) in a storm off Cape Bonesprance (the Cape of Good Hope) (IOR/L/MAR/A/CXXXIII, f. 16v)

At first, the Company either bought or built its own ships. However, from 1639 the Company began to hire ships, and after the closure of the Company’s dockyard at Blackwall in 1652, freighting from private owners became the general practice. Ships were built to agreed specifications by groups of managing ship-owners on the understanding that they would be hired by the Company. By the end of the eighteenth century, however, ships which had not been built specifically for the Company’s service were increasingly being hired or licensed for voyages to Asia. Whilst the owners were responsible for providing the crew for the ships, the officers were appointed by the Company, which tightly controlled aspects of the voyages including the pay for all ranks, private trade by crew members, and the precise amounts that could be charged for passage.

It was the regular practice for the commander and other principal officers of a ship to keep a full account of the voyage in a journal or log-book, which would eventually be handed in to East India House, the Company headquarters. From about the beginning of the eighteenth century these were supplemented by an official log, that was kept in a special form book supplied by the Company. The Company preserved the journals as evidence for the fulfilment of the terms of the charter. They were available for study by any East India Company ship commander, and the often detailed observations and navigational information they contain were utilised extensively by successive hydrographers for the purposes of improving the marine charts published by the Company. 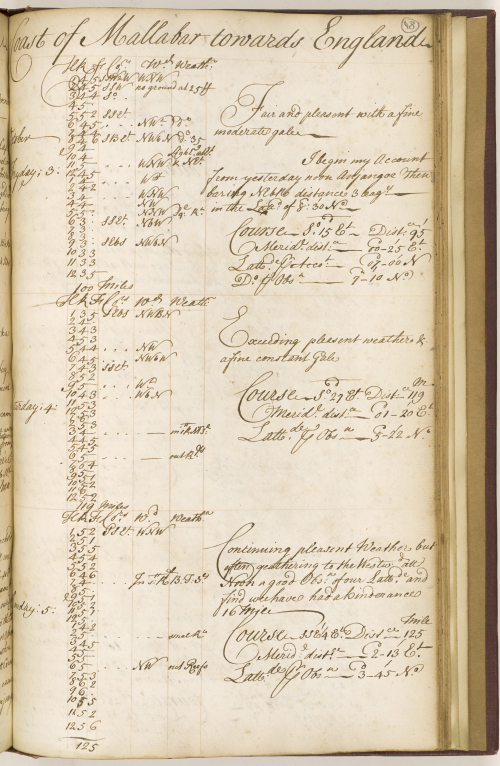 Enhanced catalogue descriptions have been created for journals of ships that visited ports in the Gulf and the Arabian Peninsula, and these journals have been digitised and are being made freely available on the Qatar Digital Library website as part of the British Library/Qatar Foundation Partnership. They constitute an extraordinarily rich and valuable set of primary sources for numerous areas of research, including: the history of global trade networks; encounters between British merchants and crews and diverse people in different parts of Asia, Africa and elsewhere; the origins of British imperialism; rivalry between European powers in Asia; long-distance marine navigation; the experience of everyday life on board ship, and during lengthy voyages, for members of the crew; and historic weather patterns over the course of more than two centuries.

The first twelve voyages all had Indonesia as their primary destination, and the first English ‘factory’ or trading post in Asia was established at Bantam (Banten) on the island of Java. England’s main export of woollen cloth proved unpopular in Southeast Asia, however, whereas Indian cottons were discovered to be in high demand.

India was comprised of a number of distinct trading zones, each governed by separate and independent states, with each state being historically and commercially linked to a number of trading areas in both east and west Asia. Gujarati ships, for example, had long sailed to Java and Sumatra, exporting cotton in return for pepper and spices, as well as trading with the ports of the Red Sea and the Gulf.

It was in order to explore new possibilities for trade, to capitalise on these existing trade links, and to discover potential markets for English woollens, that the ships of the Third Voyage were instructed to sail to Bantam via the Arabian Sea and Surat. The latter was the principal port of the Indian Mughal Empire (1526-1857), and it was where the Company would establish its main factory in India. By 1620 the ‘Presidents’ or Chief Factors at Bantam and Surat controlled nearly two hundred factors spread out across more than a dozen trading centres, from Macassar (Makassar) to Masulipatnam (Machilipatnam) and from the Malabar Coast to the Red Sea.

In addition to Bantam and Surat, other destinations of the voyages included Persia (Iran), where raw silk was obtained, and Mocha in southern Yemen, where coffee could be purchased. Indeed, by the 1660s coffee had become the staple export of the Red Sea ports. Other ports of call in Gulf and the Arabian Peninsula included Aden, Socotra, Bandar ‘Abbas, Jeddah, Muscat, Jask, Masirah and Qeshm. 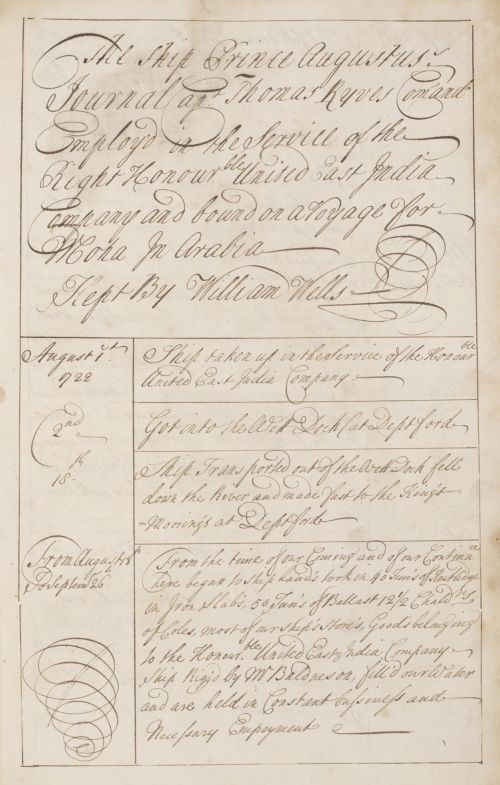 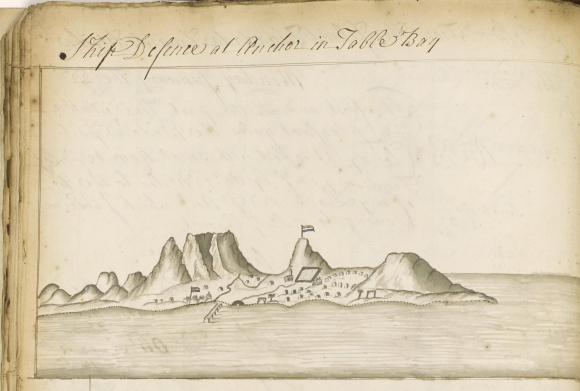 The daily entries in the journals record: the arrival and departure of the ships from the various ports of call on the voyages; wind and other weather conditions; actions performed by members of the crew; encounters with other ships, including accounts of engagements with Portuguese ships (before the signing of a peace treaty, the Convention of Goa, in 1635); disease and deaths amongst the crew; punishments inflicted on crew members for various offences; and sometimes sightings of birds, fish, and other marine animals. Entries for when the ships were in port also record the provisioning of the ships, goods being loaded onto the ships, and goods and chests of treasure being unloaded from the ships and taken ashore for trading purposes. Entries for when the ships were at sea additionally record navigational information, including measurements of latitude, longitude, variation, and the courses of the ships, as well as sightings and bearings of land. Sketches, mostly of coastlines, can also occasionally be found in the journals. 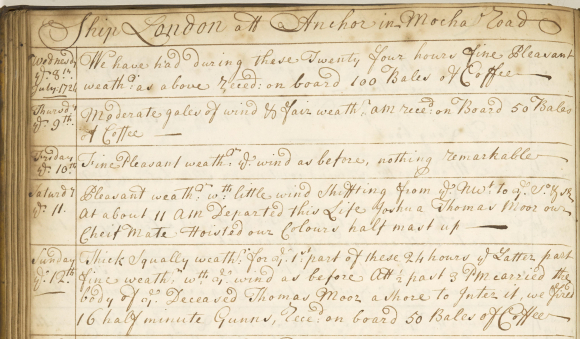 Entries from the journal of the London, 8-12 July 1724, when the ship was at anchor in Mocha Road, recording weather conditions, bales of coffee being received on board, and the death of the Chief Mate, Joshua Thomas Moor (IOR/L/MAR/B/313B, f. 45v)

Some of the IOR/L/MAR/A files take the form of ships’ ledger books, consisting of accounts of pay and other financial records of each of the ship’s crew members, and lists of the crew. The IOR/L/MAR/B files sometimes also include lists of crew members, any passengers, East India Company soldiers, as well as local Indian, Portuguese, and Arab ‘lascars’ transported by the ships.

In addition to the IOR/L/MAR/A and IOR/L/MAR/B series files, the BL/QFP has also catalogued and digitised several files from the IOR/L/MAR/C series of Marine Miscellaneous Records. These include: abstracts of ship’s journals, 1610-1623 (IOR/L/MAR/C/3); correspondence related to the Euphrates expedition of 1835-36 (IOR/L/MAR/C/573 and 574); journals and other descriptions of journeys in and around the Arabian Peninsula and India (IOR/L/MAR/C/587); a list of ships (launched 1757-1827) in alphabetical order with full physical descriptions, names of builders, where they were built, and their launch dates (IOR/L/MAR/C/529); and other files, including volumes containing various documents relating to East India Company shipping.

The renewal of the East India Company’s charter in 1813 limited its monopoly to trade with China, opening up the whole of British India to private enterprises (except for trade in tea). Then under the Charter Act of 1833 the Company’s remaining monopolies were abolished and the Company ceased to be a commercial organisation, although it continued to administer British India and other territories on behalf of the Crown until 1858. This led to a large-scale destruction of mercantile records, but fortunately the marine records which form the IOR/L/MAR Series survived, and those which relate to the Gulf and the Arabian Peninsula are now being made freely accessible through the Qatar Digital Library.