Èṣù at the BL: Journeys Through Literature and Technology 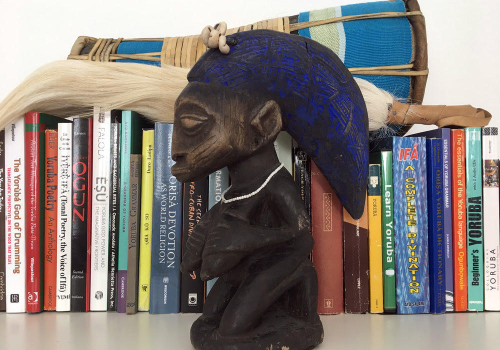 This character in Yorùbá mythology, Èṣù, achieved a somewhat more controversial status at the beginning of the 19th Century when it entered into literature. (The name is sometimes written as “Eshu” or “Exu/Echu” in Latin American literature or Legba, Elegba, Laaroye, Legba, Elegbara, among many others).

Oyelaran (2020) describes the deity as “the most important primordial bastion of the Yorùbá people’s metaphysical embodiments of organising and regulatory existential principles.” A mouthful of a description, more comprehensive than previous easy substitutions like "trickster god" or "messenger god", which have been used in the past, especially in Western literature. Wọlé Ṣóyínká calls Èṣù a “master dialectician” — one of the many important deities in the Yorùbá religious system, notable for its role as a sort of intermediary for other higher deities. Èṣù’s errands, according to stories in Ifá literature, were of different shapes, but the outcome — at least for those who crossed paths with him — could be either good or bad. But it was never just one thing, and those who worshipped it, or encountered it in a shrine or on the road, knew what propitiation was necessary to avoid its wrath or seek its warmth or direct them on another errand. Sophie Olúwọlé called Èṣù something akin to a policeman, a law enforcement agent who did not make rules but was often called upon to enforce them.

In the early 19th century, however, notably at the hands of the early missionary translators, Èṣù became something else: a total and exclusive symbol of evil. In translating the words “Satan” and “Devil” in his book Vocabulary of the Yorùbá Language (1843) [Digital Store 1333.f.23.], Samuel Ajayi Crowther had settled on “Èṣù” as the most appropriate word. 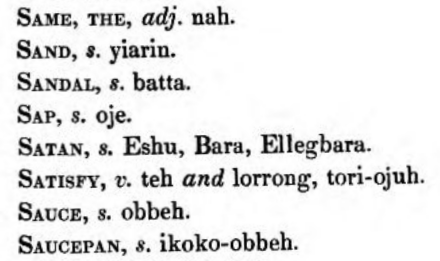 Àjàyí Crowther was an early missionary and the first African Bishop on the Niger. A Yorùbá man himself — though he was kidnapped as a child and sold into slavery. After his rescue by the British, he was educated in Sierra Leone and eventually returned home. He was intimately familiar with Yorùbá religious and cultural patterns, which made his choice of "Èṣù" for "Satan" an odd one. By settling on this rendering, however, history was forever changed. It had huge, perhaps unintended, consequences for the worship of the deity, the attitude to those who bore it as a root morpheme in their names (Èsùbíyì, Èsùgbàyí, Èsùlékè, Dáraléṣù, etc), and the perception of good and evil in Yorùbá culture and religion. (The same, later, happened in Igbo with “Ekwensu”).

Subsequent dictionaries of Yorùbá followed this particular tradition, retaining Èṣù as the appropriate translation of Satan, devil, or even demon. The Dictionary of Yorùbá Language, published by the Church Missionary Society in 1913 [X.208/3458.], did the same, as did many others. (See this review of Yorùbá dictionaries to see how Èṣù was rendered throughout history till current time). It was only natural that when technology took over as the repository of words and translations, Google Translate began to render the translation of Èṣù as “Satan” or “devil” or “demon” as well. This didn’t go well with a number of people. Adherents did not take too kindly to the association with evil, although for over a century they could not do anything about it. 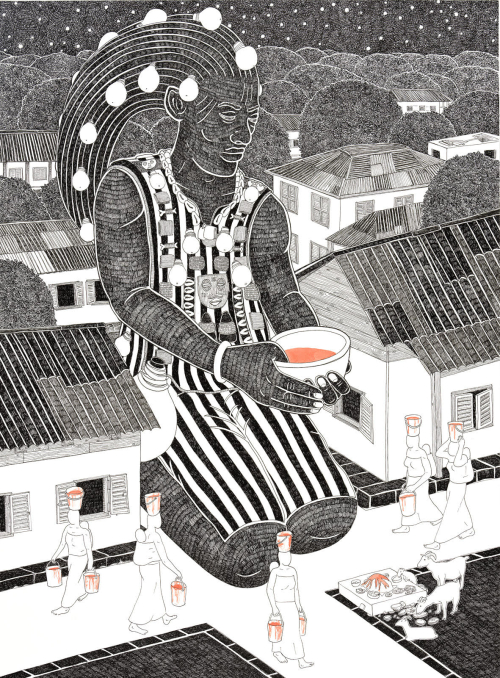 When I worked at Google from 2015-2016, I worked on the first permanent fix of that online problem. I have written about that in a 2016 blog post. In the end, Èṣù, having no direct equivalent in English, was retained as “Esu" in English translation on Google Translate. Demon became “Ànjọ̀nú”, and Devil/evil became “Bìlísì” — a Yorubanized version of “Iblis”, an Arabic word for devil (which had also shown up in later translation of the bible in the line for “deliver us from evil” as “gba wa lowo bilisi”).

I had known for a while that Àjàyí Crowther had something to do with the misrepresentation of Èṣù in modern imagination — Wole Ṣóyínká in 1976 had alleged that the Bishop had “grovelled before his white missionary superiors in a plea for patience and understanding of his ‘backward, heathen, brutish’ brothers”. But many who have engaged with the topic over the years had assumed that this mistranslation happened during the Bishop’s translation of the Bible. It was, earlier this year, while working with the physical copy of The Vocabulary of Yorùbá at the British Library (referenced earlier) that I discovered the original source of the problem. It predated the work on the Bible by a number of years.

Now while one could argue that the skills used in dictionary lexicography are necessarily different from those used in prose translation, the eventual consequences of the choice of words used still point to the influence of Christian ideas about good and evil in the Bishop’s lexicographical choices. In today’s spoken Yorùbá, the word Èṣù is used interchangeably with ‘devil’ or ‘satan’, to the consternation of those cognisant of the initial error. But this is only in Nigeria. The diaspora Yorùbá in Cuba, Brazil, and other parts of Latin America appear to have kept the deity in his place of reverence and celebration, along with the other deities.

Most dictionaries of Yorùbá, alas, have followed Àjàyí Crowther. Even dictionaries published as late as Kayode Fakinlede’s 2003 Modern Practical Dictionary [YC.2006.a.19076] have retained that original “evil” association. Most who speak the language today do not even know of the time when the association wasn’t always present. To call someone “Ọmọ Èṣù” in Yorùbá today only means “child of the devil”. So whether the bell of the evil linkage can be successfully unrung is a question that will remain up in the air.