The Japanese Collection of the British Library includes around 50 Japanese pattern and design books. Thanks to a grant from the Great Britain Sasakawa Foundation, the Library is digitising many of these and making them available online. For a list of what is currently available see Japanese manuscripts and woodblock-printed books relating to design arranged by theme. This series of blog posts features some of the items in the collection, the artists who created them and the publishers who produced them.

The first blog looked at the origins and development of Japanese textile pattern books, hinagata-bon, in the 17th and 18th centuries. These were mainly practical in nature, serving as manuals for kimono makers or catalogues for merchants and their customers. In this blog we will focus on the end of 19th and beginning of the 20th centuries when enterprising publishers and inventive artists collaborated to produce superb design books, or zuan-chō 図案帳, intended to be appreciated and enjoyed for their own sake, as much as for any practical application. 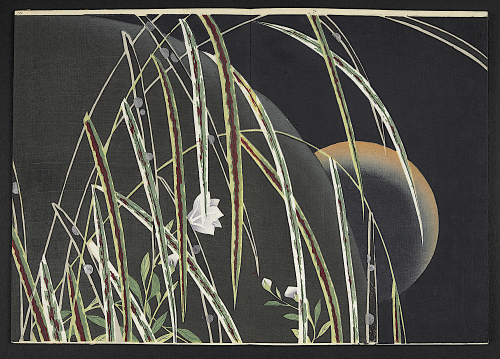 The Meiji Period (1868-1912) saw Japan emerge from centuries of self-imposed isolation and take its place on the international stage. Exposure to Western ideas and technology had brought profound changes to many aspects of Japanese society and culture and this,in turn, led to a fascination with ‘the new’ and a re-evaluation of ‘the old’ as traditions were adapted, preserved or discarded.

In late 19th century Kyoto, traditional centre of Japan’s textile industry, technological developments in dyeing and weaving led to large-scale production of goods, and a growing demand for new textile designs (zuan). The modernisation of education led to the establishment of arts schools such as the Kyoto Prefectural School of Painting 京都府画学校 (forerunner of today’s Kyoto City University of the Arts京都市立芸術大学), founded in 1880, where design was taught as a formal subject for the first time. By the 1890s professional zuanka or designers appeared, creating large number of designs which could be used not only for textiles but also for ceramics, lacquerware, screens or other craft products. One of the first design albums was Kōgei shinzu 工芸新図 (New Designs for Crafts) by Tanaka Yūhō 田中幽峰. It was published in 1892 by Yamada Naosaburō 山田直三郎, son of a family of Kyoto bookbinders, who had set up his own the publishing house the previous year under the name Unsōdō 芸艸堂.

Yamada Naosaburō was the younger brother of Honda Ichijirō 本田市次郎, proprietor of Unkindō 雲錦堂, another leading publisher of design books in the first years of the 20th century. The siblings were influential in nurturing the talent of many young designers. By employing exceptionally skilled block-carvers and printers, and pursuing the highest standards of book design and production, Unsōdō and Unkindō raised the zuan-chō to the status of an art object in its own right.

Unsōdō launched a number of influential design periodicals including Bijutsukai 美術海 (Oceans of Art), which ran from 1896 to 1902 and was succeeded by Shin Bjitsukai 新美術海 (New Oceans of Art) (1902-1906), and Seiei 精英 (Elite) which appeared in 15 issues from 1902 to 1907. Together these innovative publications featured hundreds of designs by dozens of different artists, giving them the opportunity to explore new styles and themes as they honed their skills. 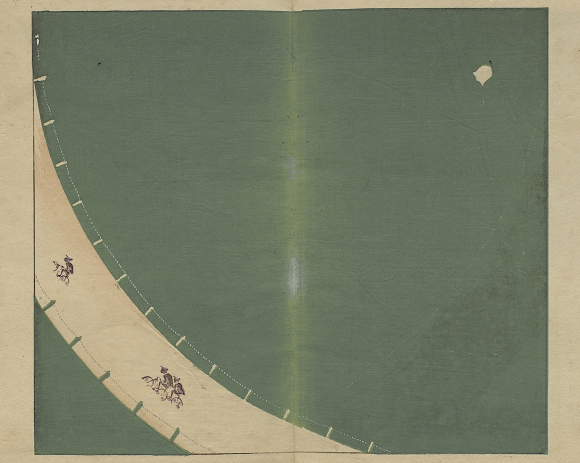 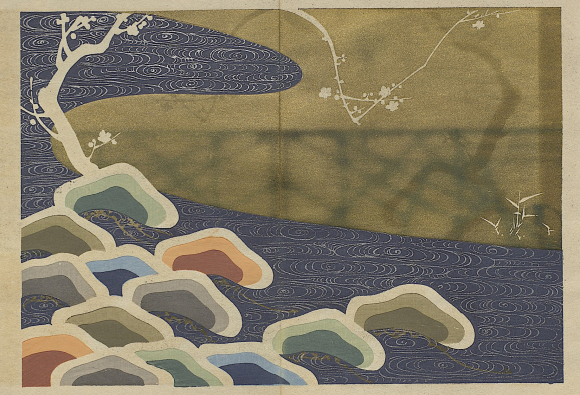 Many of the artists who contributed to these periodicals also collaborated with Unsōdō and Unkindō to produce albums of their own designs. One of the most celebrated was Kamisaka Sekka 神坂雪佳 (1866-1942). Visiting Europe for the Glasgow International Exhibition in 1901, he was inspired by Art Nouveau and Japonisme. He was also profoundly influenced by the Rinpa painting style originally founded in the 17th century by Hon’ami Kōetsu and later developed by brothers Ogata Kōrin and Ogata Kenzan.

Sekka collaborated with Unsōdō on some of its most successful publications. For example, in 1902 they published Kairo 海路 ‘One Hundred Patterns of Waves’. As its English title suggests, in this work Sekka explored ‘variations on a theme’, experimenting with colours, styles and layouts. 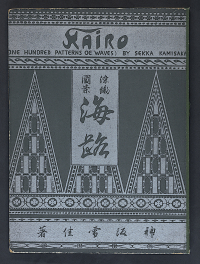 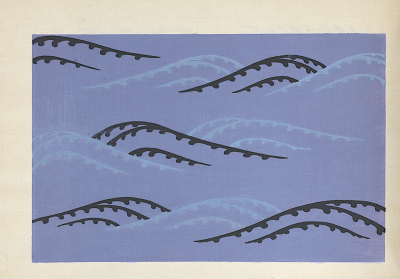 This proved a very popular concept and led to the publication in 1904 of Chō senshu 蝶千種 ‘One Thousand Butterflies’. Its two volumes contain a total of 49 double-page designs of butterflies, ranging from more or less lifelike depictions to near geometric forms as Sekka explored his theme to its limits. 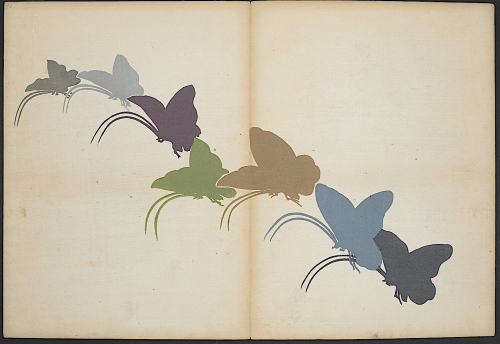 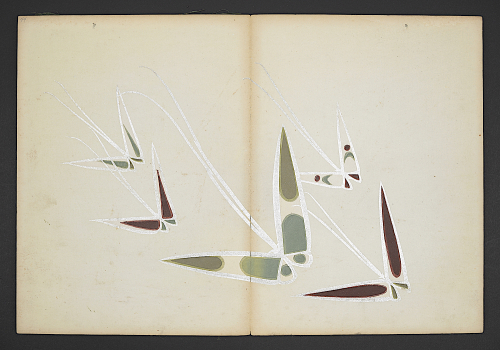 Between these two publications, Sekka showed his versatility by also producing a series of humorous designs which appeared as Kokkei zuan 滑稽図案 in 1903 with themes ranging from the signs of the Chinese zodiac to the absurdities of contemporary life. 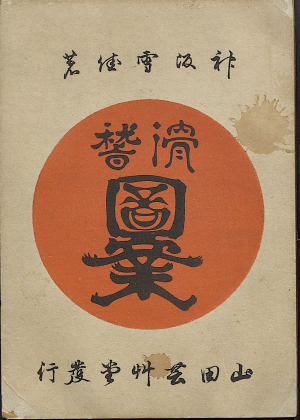 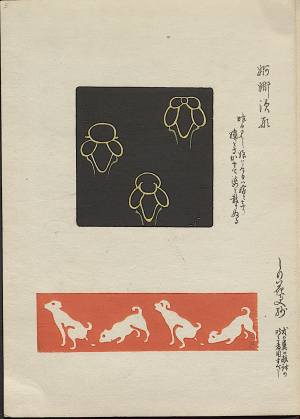 Fig. 7a. Front cover and fig. 7b. Fashionable hairdos and ‘dogs being dogs’! 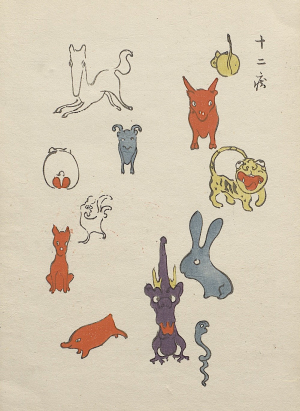 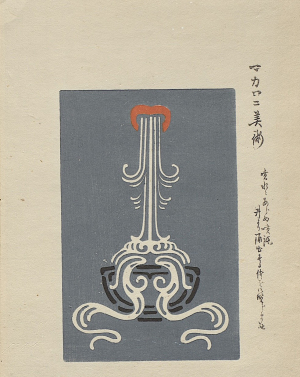 As a lecturer at what is now Kyoto City University of the Arts, Sekka inspired many talented young designers. Perhaps his most accomplished pupil was Furuya Kōrin 古谷紅麟 (1875-1910) who, while pursuing a distinguished artistic career, also went on to teach alongside his former mentor at Kyoto City School of Arts and Crafts. Like Sekka, he was strongly influenced by the art of the Rinpa School, and even changed his name from Fujitarō 藤太郎 to Kōrin in homage to one the school’s greatest exponents Ogata Kōrin,

Furuya Kōrin contributed a number of designs to the periodicals Shin bijutsukai and Seiei and subsequently worked with Unsōdō to create a series of spectacular zuan-chō. Like Sekka, he explored the ‘variations on a theme’ concept, for example, in his 1902 two-volume publication Unkashū which contains around 80 sinuous designs inspired by clouds and mist. 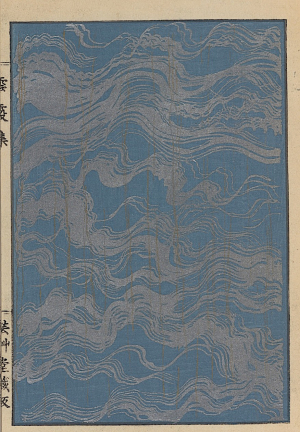 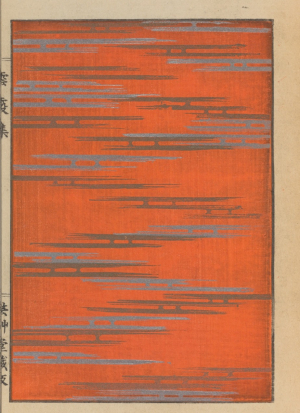 Kōrin continued to collaborate with Unsōdō until his premature death in 1910 and produced a succession of exquisite publications. For example, Date moyō hanazukushi 伊達模様花つくし ‘An Abundance of Flower Motifs for the Fashionable’ appeared in 1905 and contains 48 designs arranged two per page. Belying its title, it included many non-botanical motifs. 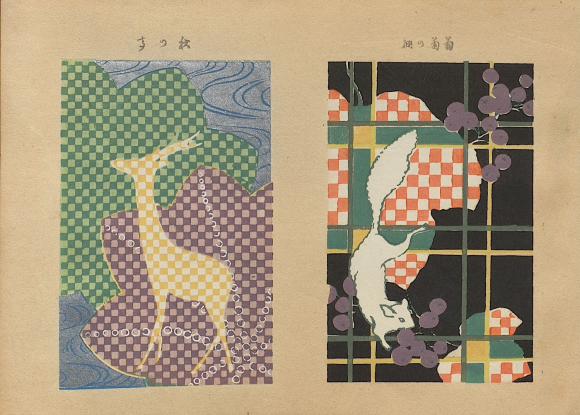 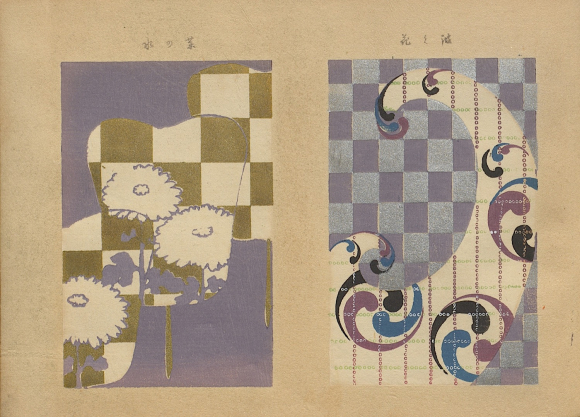 One of his most successful works was Shasei sōka moyō 写生草花模様 ‘Patterns of Flowering Plants Drawn from Nature’ (1907), in which his 50 striking designs are complemented by the superb colour-printing and sumptuous use of metallic and mineral pigments that were the hallmarks of Unsōdō and Unkindō deluxe publications. 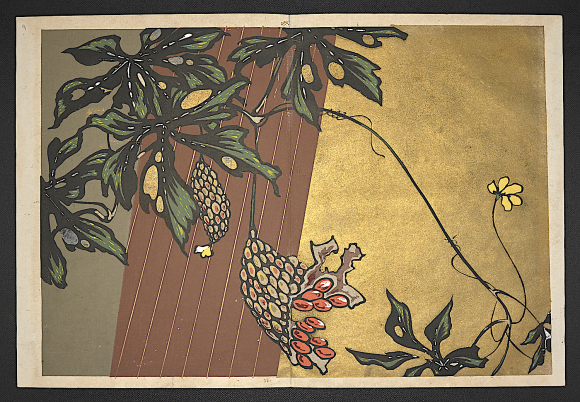 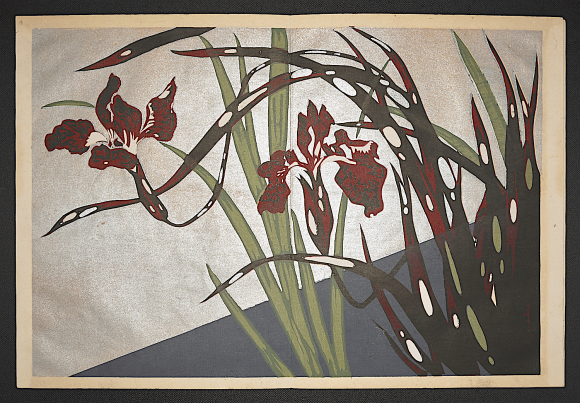 Sekka and Kōrin were just two of the virtuoso designers creating zuan-chō in the late Meiji Period and a subsequent blog will look at works in the British Library by others of their contemporaries, including Tsuda Seifū, Shimomura Tamahiro (Gyokkō) and Ogino Issui.

The author wishes to acknowledge the generous assistance of Professor Scott Johnson in the compilation of this series of blog posts.