Paññāsa Jātaka are extra-canonical Birth Tales of the Buddha. Their origin is usually associated with northern Thailand, or the former kingdom of Lānnā. However, many such extra-canonical Birth Tales found their way into the literatures of neighbouring peoples, such as the Thai of central Thailand and the Lao of Laos and northeast Thailand. Motifs that appear in some Paññāsa Jātaka can also be found on ninth-century reliefs at the Borobudur monument in Java, which suggests that some Paññāsa Jātaka may be derived from older pre-Buddhist Southeast Asian folklore. Various Paññāsa Jātaka have parallels with Sanskrit literature as well as Tamil, Chinese, Tibetan, Khotanese and Southeast Asian folk tales (Fickle, 1978).

Wooden covers of a Thai royal manuscript containing a selection of Paññāsa Jātaka from central Thailand, c.1851-1868 (British Library, Or 12524)

The Pali expression Paññāsa Jātaka literally means “fifty Birth Tales”. Varying in numbers and order of arrangement, several collections of Paññāsa Jātaka are known in the northern Thai (Lānnā), Lao, Tai Lue, Tai Khuen, central Thai, Cambodian, Burmese and Mon traditions. Although there is no evidence as to which is the original or standard collection, it is thought that most of the Paññāsa Jātaka were written down by Buddhist monastics in the Lānnā kingdom between the fifteenth and seventeenth centuries, mostly in the local northern Thai (Lānnā) dialect, with some phrases in Pāli language. Centres of Buddhist scholarship in the Lānnā kingdom were Wat Pā Daeng, Wat Phra Sing, Wat Mahābodhi in Chiang Mai and Wat Phra Thāt Haripunjaya in Lamphun, but many of the learned monks fled to Luang Prabang before and during the Burmese conquest of Chiang Mai in 1558, and others were taken to Burma. This explains not only the spread of the Paññāsa Jātaka but also the increase in production of manuscripts containing Paññāsa Jātaka across mainland Southeast Asia. The collections of Paññāsa Jātaka are also known as Jātaka nǭk nibāt and Hāsip chāt in the Lānnā and Lao traditions, and Zimmè pannātha in the Burmese tradition (Zimmè referring to Chiang Mai). Most of the surviving manuscripts containing one or more Paññāsa Jātaka date back to the eighteenth and nineteenth centuries, but many of them appear to be copies from older manuscripts. Pali language versions of Paññāsa Jātaka can be found in the central Thai, Khmer and Burmese traditions.

Paññāsa Jātaka in Khmer script on palm leaves in ten bundles, written in ink on gilt background (first leaf of each bundle) and incised on plain palm leaves. With small lacquered and gilded illuminations in ovals on the second leaf. Central Thailand, c.1851-1868 (British Library, Or 12524)

A royal edition of a selection of Paññāsa Jātaka was commissioned by King Mongkut (Rama IV, r.1851-1868). The text was written mainly in Khmer script which was commonly used for Pali Buddhist scriptures in central Thailand up until the end of the nineteenth century. Only a few words on the first two leaves are written in Khom script, a variant of Khmer script used in Thailand. The manuscript consists of ten bundles with altogether 235 palm leaves, held between two wooden covers which were decorated with black lacquer and gilt floral patterns. The text was incised and blackened on the plain dried palm leaves, except the first leaf of each bundle which are gilded with text applied in black ink or lacquer. All the palm leaves have gilded edges. The title leaves of each bundle are decorated with two illuminations in ovals; one on the left side showing a vihāra (Buddhist assembly hall), and one on the right depicting the royal seal of King Mongkut (Rama IV) with a crown between two parasols (below). 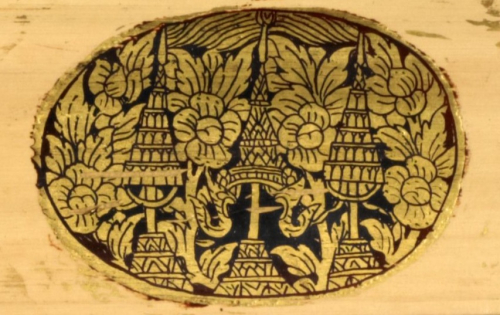 A set of northern Thai Paññāsa Jātaka transliterated from Dhamma script into Thai script was published in 1998 under the auspices of Chiang Mai University. The international team of researchers involved in this project point out that the original manuscript version written in northern Thai Dhamma script is mainly in the Lānnā dialect with added words and phrases in Pali. The text of these Paññāsa Jātaka is in prose and largely follows the structure of the Jātaka in the Pali canon. Whereas central Thai manuscript versions of the Paññāsa Jātaka were compiled in Pali language, early printed works usually contain translations of these stories in Thai language to make them available to wider audiences in central Thailand. The first printed Thai translation was published in 1923 under the direction of Prince Damrong Rajanubhab, a son of King Mongkut (Rama IV) and founder of the modern educational system of Thailand. 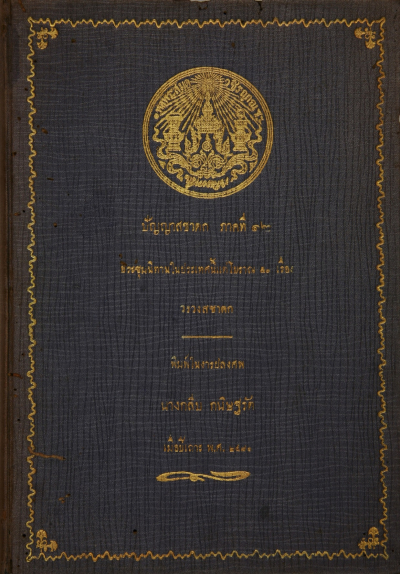 To understand the dissemination of a relatively small extra-canonical collection of stories with a Buddhist motif over a wider geographical area one has to take the role of oral tradition and performance into consideration. Although monks and novices may have collected folktales and written them down for the first time, and even translated them into Pali and then back into various other vernacular languages, the spread of these stories will also have to be credited to the oral traditions and performing arts. Not only monks travelled forth and back between centres of Buddhist worship, education and art, but also royals, artists, singers and musicians, theatre troupes, craftsmen, traders and ordinary people who would have helped to make their own folkloristic heritage known in foreign lands. And even when texts had been written down, the manuscripts did not necessarily stay in one place, but were often donated to Buddhist temples in faraway cities, regions and countries.

Posted by Ursula Sims-Williams at 1:10 AM