Radicals and Rebels: The published works of Issachar Jacox Roberts

In this blogpost, we return to an item discussed last year on the British Library Conservation Care blog in Consider the Cover: Conserving a Chinese Book, when it was being prepared for the exhibition ‘Writing: Making Your Mark’ (26 April – 27 August 2019). We then learned about the story told by the book’s binding, and now we look closer at its contents and context within the dramatic events of 19th-century China. 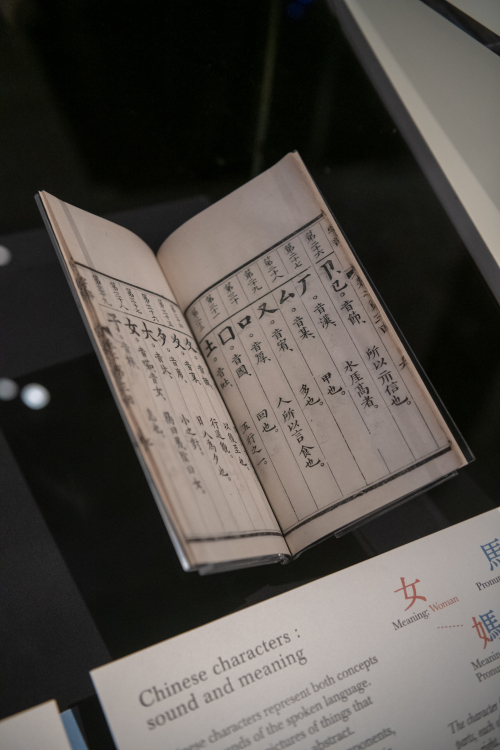 Aside from being the second American Baptist missionary to set up in China and the first to establish a Protestant mission outside the foreign 'factory' corner  of Canton (Guangzhou), Issachar Roberts was also the religious teacher of Hong Xiuquan 洪秀全. Hong was the man who, in 1851, proclaimed himself the younger brother of Jesus Christ and led a 13-year rebellion against the Qing dynasty as ruler of the Taiping tianguo (太平天囯 ‘Heavenly Kingdom of Great Peace’).

‘An Explanation of Radical Characters’

Zi bu ji jie is a short text which acts as a guide to the pronunciation and general category of meaning associated with each of the 214 Kangxi radicals (the classifiers used most famously in the dictionary completed in 1716, during the reign of the Kangxi Emperor). These descriptions seem to be taken, either wholly or in part, from entries in the Kangxi dictionary (康熙字典 Kangxi zidian), which in turn draws upon earlier sources such as the Shuowen jiezi 說文解字 and the Guangyun 廣韻.

Each entry gives the pronunciation first in the form of a homophone character, with variations in tone denoted by the position of a small circle, followed by a short definition in classical Chinese. The character 口 ‘mouth’, for example, is described as人所以言食也 “the means by which people speak and eat.”

The text may be classical in origin and formulaic in structure but it still reveals some of the context of its creation. For instance, it would appear that Roberts was unable to source a satisfactory definition of the eighth Kangxi radical 亠 ‘head’ and instead wrote: 亠字冇乜解法 “The character亠 has no explanation”, using local the Cantonese characters 冇乜 (= 沒有什麽 = ‘without any’). 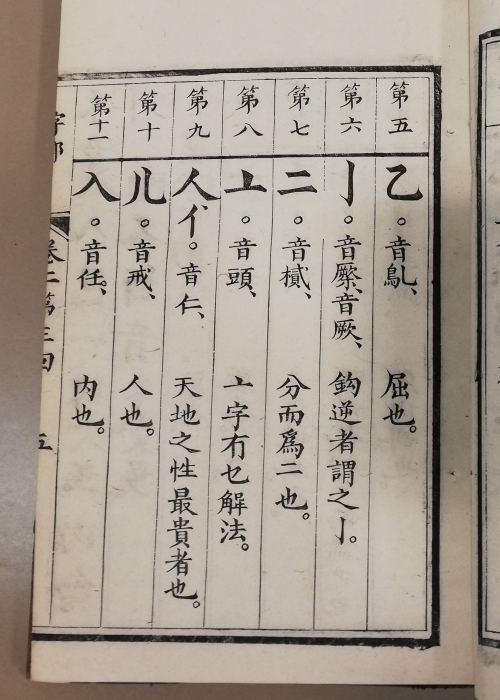 The copy of this work held in the British Library is stamped with “I. J. Roberts” and also includes a handwritten dedication to another prominent missionary, Walter Medhurst, and the date “October 13th, 1840”.

Little did the Reverend Roberts know when he published this ‘Explanation of Radical Characters’ that seven years later he would meet a ‘radical character’ of a very different kind.

‘Catechism in the Macao Dialect’ 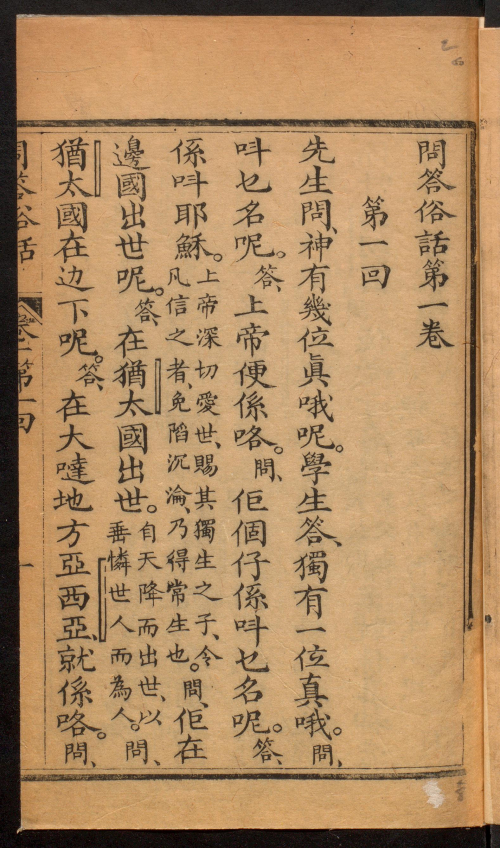 Wen da su hua is translated as ‘Catechism in the Macao Dialect’ and serves as an introduction to Christian doctrine presented in the form of a series of questions and answers. Given its title and more vernacular style, it is not surprising that local characters feature once again. In addition to the frequent use of the character 乜 (= 什麽 = ‘what/any’) in the phrasing of the questions, you can also find the third person pronoun 佢 and the verb 係 ‘to be’, such as:

問，佢個仔係呌乜名呢。答，係呌耶穌。
“Question: What is the name of his [God’s] son? Answer: [He] is called Jesus.”

This publication also includes a map of Asia and other geographical descriptions, which has been said to reflect Roberts’s “interest in spreading knowledge about the world”, and may well have formed part of Hong Xiuquan’s educational syllabus when he studied under the missionary in 1847.

This volume is signed by the author with the character 孝 ‘The Filial’, which is part of Roberts’s Chinese name, Luo Xiaoquan (羅孝全). It also appears to have been gifted to someone, although the ink has bled and the name is obscured. It is not clear whether these works were shown to Hong Xiuquan when he studied under Roberts in 1847. It seems likely that the catechism in particular may have been used, especially as Roberts himself refers to employing his own materials as well those prepared by other prominent missionaries. One thing we do know is that, despite his formal Christian education being cut short when his baptism was “postponed indefinitely”, the two months Hong spent with Roberts at his chapel in Canton (Guangzhou) had a profound and enduring effect on the soon-to-be Taiping leader and his ideology.

The meeting of Hong and Roberts was a turning point in Chinese history, falling halfway between two other crucial moments in the story of the Taiping rebellion. The first was in 1843, when Hong used certain Christian tracts as the basis for interpreting visions he had had following his fourth failure in the civil service examinations. Through this he perceived his divine purpose – to purge the earth of demons and idolatry – and lineage – as the second son of God and younger brother of Jesus Christ. The second crucial moment was on 11 January 1851, when he stood before thousands of his followers established himself as the leader, or Taiping Wang (太平王‘King of Great Peace’), of a rival Chinese dynasty.

In an article published in Putnam’s Monthly in October 1856, Roberts referred to both Hong’s examination failures and his postponed baptism as formative moments, or instances in which “all-wise Providence overruled”. He writes:

“Had he gained his literary degree, to become a mandarin under the Tartar rule would have been his highest aim; had he been baptized, to become an assistant preacher under his foreign teacher was the object in view; but now how widely different his present position!”

Roberts had been unaware of what had become of his one-time student until 1852 but spent much of the next eight years gathering support for the Taiping movement and trying to reach their capital at Nanjing (or Taijing 太京 ‘Heavenly Capital’, as it was known by the Taipings). Once there, he hoped to make use of his unique personal connection and the Christian fervour behind the rebellion in order to further his religious mission in China. 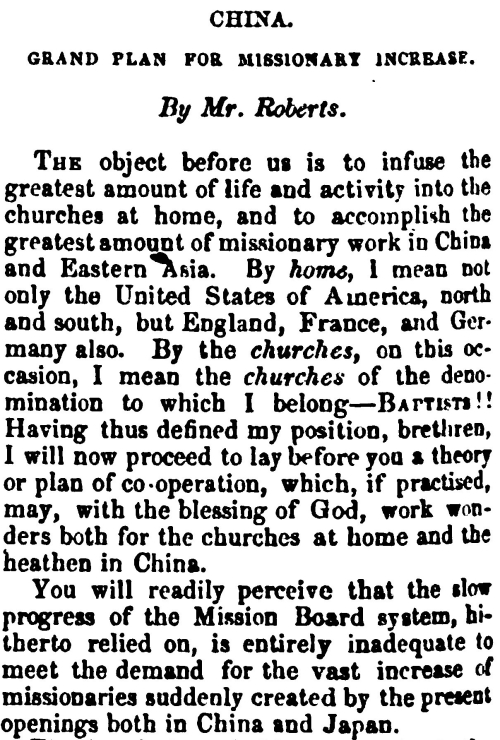 Detail from “Grand Plan for Missionary Increase” by I. J. Roberts, as published in the Primitive Church Magazine in January 1855. (P.P. 429)

Roberts expressed his support of the Taiping regime in a circular dated June 1854 entitled “Grand Plan for Missionary Increase in China”, which was published the following January in The Primitive Church Magazine. A bit of a rebel himself, he went as far as to challenge what he saw as the “unequal and oppressive” actions of the Mission Board (which had dismissed him in 1852) and propose an alternative “committee of co-operation” to be based among the Taipings at Nanjing. Although aware of the disparities between his own beliefs and those of the Taipings, he was convinced that he could convert them to “true Christianity” and claimed that: “the Tartar dynasty will become defunct and the Tae-ping dynasty will be established in its stead… the Christian religion will not only be tolerated but promoted throughout China”.

It was not until 1862 that, having reached Nanjing and spent more than a year among the Taipings, Roberts finally gave up on his “grand plan”. Hong continued to express deep respect for his former teacher, granting him the exclusive honour of a personal audience and issuing orders for his protection, but Roberts came to realise that their religious differences were both substantial and irreconcilable. He left Nanjing in January 1862, “thoroughly disgusted with their proceedings”.

Alexander Wylie, Memorials of Protestant Missionaries to the Chinese: Giving a list of their publications, and obituary notices of the deceased. With copious indexes. (American Presbyterian Mission Press: Shanghae [sic], 1867): pp. 94-97. (4766.dd.).