The Politics of Prognostication in the Cairo Sultanate

In today’s complex and ever-changing circumstances, who wouldn’t want infallible means for interpreting the world around them and even predicting future events? While today’s leaders look to their medical, economic, military and other expert advisers, historically rulers across the world have also consulted astrologers, dream-interpreters and specialists in other forms of divination and occult sciences.

The Mamlūk sultans of late-medieval Egypt and Syria were no different in this regard. Many manuscripts copied within the Cairo Sultanate have survived and a number of them are on various methods of interpreting the present or foretelling the future. Since some of these manuscripts were produced for politically high-ranking patrons, we are in the privileged position of being able to read over the shoulders of Mamlūk sultans and amīrs (military commanders) and get a feeling for the place of prognostication in Mamlūk politics. 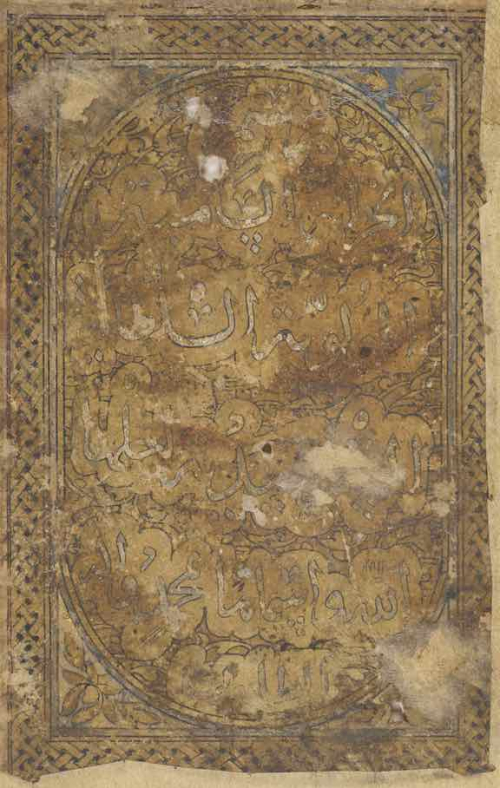 One such manuscript is Or. 7733, a manual of dream interpretation called the Book of the Full Moon on the Science of Dream Interpretation (Kitāb al-badr al-munīr fī ʿilm al-taʿbīr), written by Abū Muḥammad ʿAbd Allāh ibn ʿAlī ibn ʿUmar ibn Muḥammad ibn ʿAlī al-Baṣrī al-Maṣrī, known as Ibn Jaydān. The manuscript is a holograph (i.e. the copy was made by its author, Ibn Jaydān), completed on Wednesday 2 Rabīʿ II 727/25 February 1327 for the Sultan’s treasury (see ff. 1ar and 260r, lines 4-7). Ibn Jaydān explains in the preface that he composed the manual for the Mamlūk prince ʿImād al-Dīn Ismāʿīl (b. ca 725/1325, see f. 6v, lines 12-13). Since, however, this prince was still an infant in 1327, the true dedicatee must have been the boy’s father, the reigning Sultan al-Malik al-Nāṣir Muḥammad ibn Qalāwūn (reg. 693-741/1293-1341 with gaps). Ibn Jaydān, claims that ‘the most deserving person concerning this science is the sultan because God bestowed His sovereignty upon him and entrusted him with custodianship of His creation, so of all people after the prophets, his dream is the most true and veracious’ (أَوْلَى الناس بهذا العلم السلطان لما آتاه الله من ملكه وكلّفه رعاية خلقه فكانت رؤياه أصحّ من كافة الناس بعد النبيين وأصدق, f. 4r, lines 10-13), and even tells us that he had dedicated other writings on dream interpretation to al-Nāṣir Muḥammad (see f. 3v, lines 5-7).

It seems, then, that the all-but-forgotten Ibn Jaydān was the personal dream-interpreter (muʿabbir) to al-Nāṣir Muḥammad, or at least that he repeatedly sought this sultan’s patronage. Given the relatively stable political climate in which al-Nāṣir Muḥammad ruled – his third reign, during which Ibn Jaydān wrote the Full Moon, lasted 31 years – it is not surprising that Ibn Jaydān wrote in support of the Sultan’s dynasty, the Qalāwūnids (678-784/1279-1382). In his preface to the Full Moon, Ibn Jaydān takes the opportunity to stress the crucial role dream interpreters have played in foretelling and protecting a ruler’s lineage. To do this, Ibn Jaydān presents a series of examples of dream-interpreters correctly predicting the deaths of presumptive heirs to the throne and the births of future rulers. These stories served to remind al-Nāṣir Muḥammad of the importance of dream-interpreters to the illustrious rulers of earlier Islamicate history, and more importantly of the reliability of their interpretations in foretelling the fortunes of their dynasties. 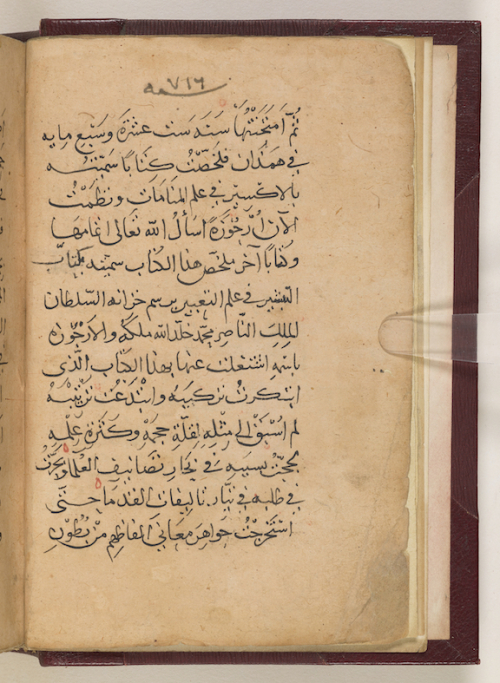 Ibn Jaydān lists his other works on dream interpretation: (1) an abridgement composed at Hamadhān in 716/1316-7 of The Book of The Elixir on the Science of Dreams (Kitāb al-iksīr fī ʿilm al-manāmāt), (2) an unnamed didactic poem (urjūzah), (3) The Book of Glad Tidings Concerning The Science of Dream Interpretation (Kitāb al-tabshīr fī ʿilm al-taʿbīr) dedicated to al-Malik al-Nāṣir Muḥammad, and (4) another didactic poem named after the same sultan (British Library Or. 7733, f. 3v, see lines 1-8)

This is the context in which to understand Ibn Jaydān’s dedication of the work to an infant prince. The dedicatee, ʿImād al-Dīn Ismāʿīl, was not much more than one or two years old when Ibn Jaydān presented his dream interpretation manual, and he was not necessarily the heir apparent. In fact, his half-brother, al-Malik al-Manṣūr ʿAlāʾ al-Dīn ʿAlī, as first son of al-Malik al-Nāṣir’s first marriage had been heir to the throne until he died aged 7 and was buried in his father’s royal mausoleum in 710/1310. In the preface to the Full Moon, Ibn Jaydān refers to the late crown prince as ‘the martyred ruler ʿAlāʾ al-Dīn’ (ʿAlāʾ al-Dīn ʿAlī al-malik al-shahīd). Ibn Jaydān correctly predicts that ʿImād al-Dīn Ismāʿīl would one day become sultan, and indeed he lived to reign as al-Malik al-Ṣāliḥ (reg. 743-6/1342-5). Ibn Jaydān’s dedication of the Full Moon to ʿImād al-Dīn Ismāʿīl was not only a vote of confidence in the viability of the prince’s future reign as sultan and thus the continuation of the Qalāwūnid dynasty, but perhaps more importantly a statement of Ibn Jaydān’s loyalty to the sultan. 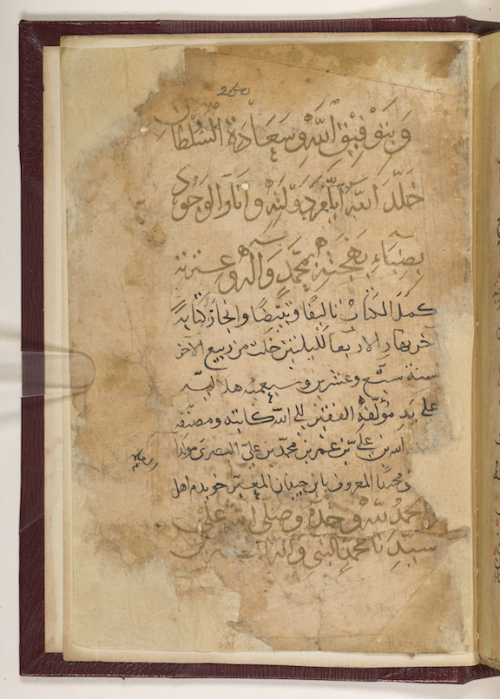 When the long and relatively stable reign of al-Nāṣir Muḥammad came to an end with his death in 741/1341, the subsequent forty-one years witnessed twelve of his descendants accede to the throne before the Qalāwūnid dynasty ended with the accession of al-Malik al-Ẓāhir Barqūq in 784/1382. Between al-Nāṣir Muḥammad’s death and the accession of Ibn Jaydān’s dedicatee, al-Malik al-Ṣāliḥ Ismāʿīl (then about seventeen years old) the following year, no fewer than three of his brothers had taken the sultanate and either died or been deposed in factional intrigues. These tumultuous final years of the Qalāwūnid dynasty were dominated by the short reigns of very young sultans – often legal minors. Meanwhile, powerful Mamlūk amīrs wrestled for power as kingmakers and regents.

One of these young sultans was al-Nāṣir Muḥammad’s grandson, al-Malik al-Ashraf Shaʿbān II (b. 754/1353, reg. 764-778/1363-1377). He was only ten years old when he assumed the sultanate, but he held an uncharacteristically long reign for the period. In the early part of this reign, the real power was wielded by his regent and Commander-in-Chief (atābak al-ʿasākir), the ‘slave-soldier’ (mamlūk) Yalbughā al-Khāṣṣakī. Three years after al-Ashraf Shaʿbān’s accession, the child Sultan conspired with a group of six amīrs to overthrow Yalbughā and had him murdered in Rabīʿ II 768/December 1366. 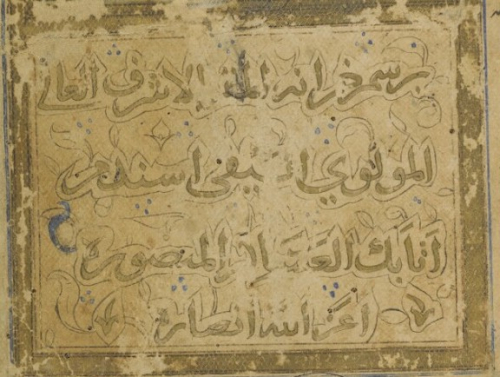 In the ensuing turmoil, one of the six conspirators, the amīr Sayf al-Dīn Asandamur al-Nāṣirī (d. 769/1368), consolidated his power, winning military victories first against mamlūks formerly owned by and still faithful to Yalbughā and then against the Sultan’s own supporters. By the summer of 768/1367, Asandamur al-Nāṣirī had assumed the title of Commander-in-Chief, a position second in rank only to the Sultan. He was now master of the Cairo Sultanate as regent and power behind the throne of al-Ashraf Shaʿbān, who at around 14 years old was only just coming of age. 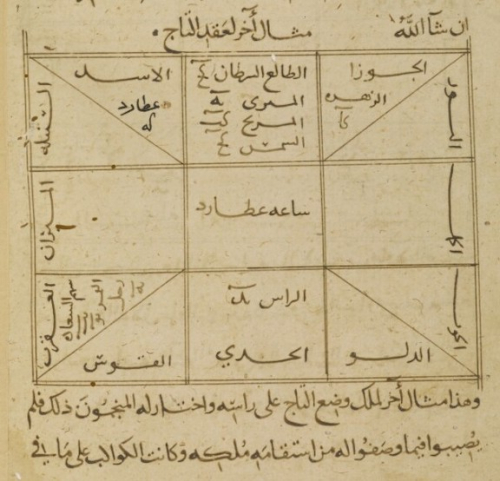 al-Qaṣrānī’s Book of Interrogations contains historical examples of horoscopes for pre- and early Islamic rulers, such as this horoscope cast for the coronation (ʿiqd al-tāj) of the Byzantine usurper Leontius (reg. 484–488) at sunrise on Wednesday 18 July 484. Note that, despite its shelfmark, Delhi Arabic 1916 vol 2 is not actually the second volume of Asandamur al-Nāṣirī’s set of the Book of Interrogations and was copied over a century earlier, in 640/1243 (British Library Delhi Arabic 1916 vol 2, f. 137v ; see text and translation in Pingree 1976, Horoscope VII, pp. 139-42)

It may seem surprising that during his dramatic rise to power Asandamur al-Nāṣirī could have found time to consult a copy of the Book of Interrogations (Kitāb al-masāʾil) by the late third/ninth-century astrologer Abū Yūsuf Ya‘qūb ibn ‘Alī al-Qarshī al-Qaṣrānī. The text is a multi-volume treatise on ‘interrogations’, an astrological practice in which a question is answered by means of a horoscope cast for the time and place the interrogator poses the question. Since this practice was commonly used to predict the political fortunes of newly enthroned monarchs, and al-Qaṣrānī’s Book of Interrogations contains many historical examples of such royal horoscopes, it is not difficult to see why the book would have appealed to Asandamur al-Nāṣirī as he assumed authority over the sultanate.

Colophon of vol. 1 of Asandamur al-Nāṣirī’s copy of the Book of Interrogations, dated first 10 days of Shawwāl 768/late May-early June 1367: ‘The Book of Interrogations is finished with the praise and help of God in the first tenth of Shawwāl 768. May the prayer of God be upon our lord Muḥammad, seal of the prophets and apostles, and upon his family and all his companions. God suffices for us – truly He is the perfect authority’ (تم كتاب المسائل بحمد الله وعونه | في العشر الأول من شوال سنة ثمان وستين وسبعمائة | وصلى الله على سيدنا محمد خاتم النبيين والمرسلين وعلى آله وصحبه أجمعين | وحسبنا الله ونعم الوكيل). At either side of the top line of the colophon, another hand has written the following: ‘The first part of … is finished. It is followed by Chapter Seven: Concerning the Matter of Two Adversaries’ (Right: تم الجزء الأول من; Left: يتلوه الباب السابع في أمر الخصمين) (British Library Delhi Arabic 1916 vol 1, f. 193v)

Asandamur al-Nāṣirī’s copy of the Book of Interrogations  was completed during the first 10 days of Shawwāl 768/late May-early June 1367, just as he was defeating the Sultan’s forces to achieve total dominance over the Mamlūk sphere. We do not know if Asandamur al-Nāṣirī or, more likely, an astrologer under his patronage actually used the techniques taught in the Book of Interrogations to foretell what would become of the new master of Egypt and Syria. Despite any astrological support he may have received, Asandamur al-Nāṣirī’s regency was short-lived, and in Ṣafar 769/October 1367 his troops suffered a catastrophic defeat by those of the Sultan. Asandamur al-Nāṣirī fled to Alexandria, where he met his end shortly after in obscure circumstances.

Thanks to Prof. Jo Steenbergen (University of Ghent) and Dr Noah D. Gardiner (University of South Carolina) for their helpful comments on an earlier draft of this blog post.

Further reading
Bauden, Frédéric, ‘The Sons of al-Nāṣir Muḥammad and the Politics of Puppets: Where Did It All Start?’, Mamlūk Studies Review 13.1 (2009), pp. 53–81.
Flemming, Barbara, ‘Literary Activities in Mamlūk Halls and Barracks’, in Barbara Flemming, Essays on Turkish Literature and History (Leiden: Brill, 2018), pp. 105-16.
Franssen, EÏlise, ‘What was there in a Mamlūk Amīr’s Library? Evidence from a Fifteenth-century Manuscript’, in Developing Perspectives in Mamlūk History. Essays in Honor of Amalia Levanoni , ed. by Yuval Ben-Bassat (Leiden: Brill, 2017), pp. 311-32.
Mazor, Amir, ‘The Topos of Predicting the Future in Early Mamlūk Historiography’, in Mamlūk Historiography Revisited – Narratological Perspectives, ed. by Stephan Conermann (Göttingen: Bonn University Press, 2018), pp. 103-19.
Pingree, David, ‘Political Horoscopes from the Reign of Zeno’, Dumbarton Oaks Papers 30 (1976) pp. 133 and 135-50.
Van Steenbergen, Jo, ‘“Is Anyone My Guardian…?” Mamlūk Under-age Rule and the Later Qalāwūnids’, Al-Masāq 19.1 (2007), 55-65.
———, ‘The Amir Yalbughā al-Khāṣṣakī, the Qalāwūnid Sultanate, and the Cultural Matrix of Mamlūk Society: A Reassessment of Mamlūk Politics in the 1360s’, Journal of the American Oriental Society 131.3 (2011), 423-43.