Two Miscellanies in the Manuscript Collection of Sir William Jones

Sir William Jones collected a large array of manuscripts in Arabic, Persian, Chinese and Sanskrit during both his life as a student and lawyer in London, and also as a puisne judge in Bengal. Collecting primarily Persian and Arabic materials and mostly commissioning Sanskrit materials, Jones picked up quite a number of oddities along the way. By far the biggest part of the collection is made up of well-known or popular works of Arabic and Persian science, literature and grammar as well as standard reference works in Islamic law; his collection is replete with such wonders as a beautifully illustrated copy of Niẓāmī’s Khamsah (MS RSPA 31), three separate copies of Rūmī’s Mas̱navī (MSS RSPA 34-41), and six manuscripts of works by Jāmī (MSS RSPA 46-50), including a Kulliyāt-i Jāmī (the complete, or collected, works of Jāmī; MS RSPA 46). 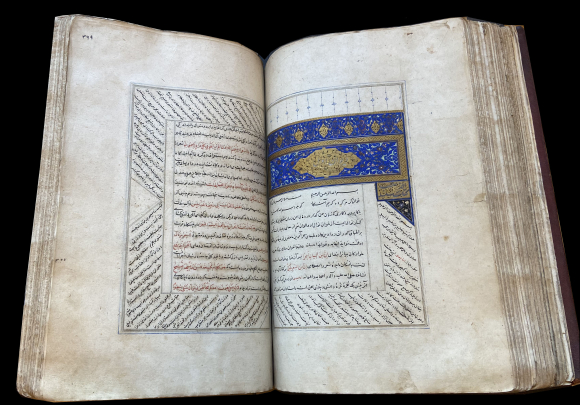 In this blog post, however, I would like to shine a light on two of the most unusual and most difficult to classify manuscripts in the collection. Perhaps the most strikingly individual manuscript is MS RSPA 55, written on a mix of poor-quality coloured paper by a variety of hands. Impossible to classify or name, RSPA 55 is made up of miscellaneous segments of texts with no clear order or internal principles. Composed largely out of selections of poetry from a range of Persian authors, there are several sections which are devoted to the Dīvān-i ʻUrfī of the 16th century Indo-Persian poet ʻUrfī Shīrāzī, whose work is the most frequently reproduced in the manuscript.

Beyond ʻUrfī, there appears to be little to no rhyme nor reason behind the selections; there are anecdotes referring to Hārūn al-Rashīd followed immediately by a story of three travellers who share ten loaves, shortly after which we find a description of ten different kinds of script (Arabic, Greek, etc.), sayings in Persian by Plato and quotations in Arabic from the ḥadīth. This is all spread over just 4 folios, ff.87-91. 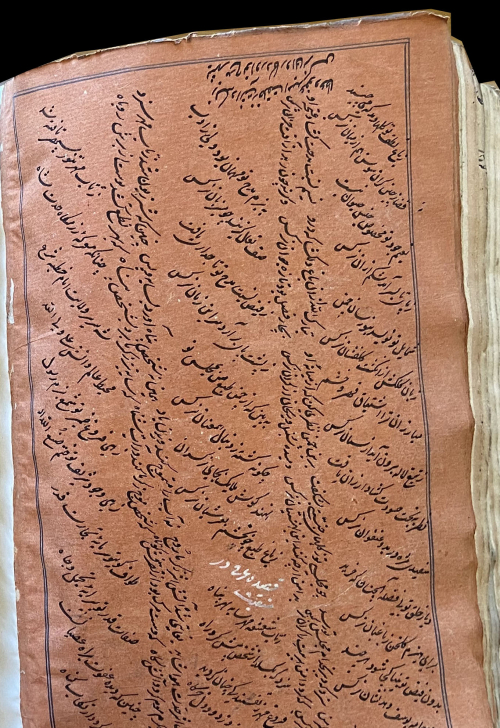 The manuscript continues to spool its way over 469 folios, replete with ghazals, rubāʿīs, letters, witticisms and anecdotes, as well as qaṣīdahs, mars̱īyahs and qiṭʻahs of varying renown; perhaps one of the most striking things about this hodge-podge manuscript is the number of lesser known poets among the ones quoted. Rarely today will students of Persian poetry study in depth (if at all) the Dīvān of, say, Ghanī Kāshmīrī, Mīrzā Jalāl Asīr, Fighānī or Āṣafī, all featured in this miscellany of poetry.

There is no clear indication from the manuscript of how (or why) Jones acquired the work and no reason to suppose he commissioned it. Indeed, there are no annotations on the manuscript that can positively be traced back to him; unusually, the manuscript does not even include title and author details at the beginning in his hand. Who assembled it, and perhaps more importantly why they did so in the way they did, remains, therefore every bit as much of a mystery as how it wound its way into the collections of an English puisne judge in Kolkata.

Jones also owned another miscellany of poetical works, MS RSPA 109. This very small manuscript, measuring only 200 x 65mm, is a collection of Arabic poetry about love, that Jones entitles Dīwān al-ʻāshiq, with the gloss, “A collection of Arabick poems some of which are extremely beautiful – Anthologia Amatoria.” Including poems written by a wide range of poets, including Ibn Sayyid al-Nās, Ibn Maṭrūḥ, al-Sharīf al-Raḍī and Maḥmūd ibn Fahd al-Ḥalabī. These poets come from all periods of Arabic literature, with perhaps a slightly greater number from the Ayyubid and Mamluk periods than from the earlier periods. This is indeed his only manuscript that would have provided him access to post-Abbasid poetry, as the majority of his Arabic poetry collection was composed of copies of the Muʻallaqāt and other pre-Islamic poetry (MSS RSPA 103-5 and 110), a copy of Abū Tammām’s Ḥamāsah (MS RSPA 106), the Dīwān of al-Mutanabbī (MS RSPA 107) and the Dīwān of ʿAlī ibn Abī Ṭālib (MS RSPA 108).

This manuscript also includes the only specimens of Turkish literature of the entire collection. Famously a scholar of Arabic and Persian, Jones’s scholarship is not so focused on Turkish (see Cannon, Life, 44-5). Whilst his letters make it clear he at one time viewed himself eligible for the role of ambassador to the Ottoman Empire, a job posting that never materialised, he only ever published one work of any significance on Turkish literature, this being “A Turkish Ode on the Spring,” a verse based upon Mesihi, which he augmented with a transliteration of the original and a prose translation. This poem and translation were found within Jones’s 1777 publication of Poems, consisting chiefly of translations from the Asiatick languages, before he embarked on his trip to India. In this anthology, however, which does mostly consist of Arabic poems, there are short extracts of poetry by Navāʼī, Nasīmī, Fahmī and others, in both Chagatay and Ottoman Turkish.

Beyond the poetry, the manuscript is also of interest for two further reasons. Firstly, it contains a number of folios dedicated to the writing out of glyphs for numbers of more than one digit, what appears to be several folios of handwriting practice and a folio which lists abbreviations found throughout the manuscript. Whose handwriting practice this is remains a mystery, especially given that the Turkish poetry and these miscellaneous pages were written in a hand different from the Arabic poems.

Finally, the manuscript also includes a page in English that names General John Carnac, a soldier in the East India Company and, later, after returning to India in 1773, a member of the council of Bombay (now Mumbai). This page is a short list of some of his eastern manuscripts with some brief descriptions; it seems likely that this manuscript once formed part of Carnac’s collection of manuscripts; we do not know whether Carnac himself commissioned the manuscript or if he purchased it. Carnac’s work in India did briefly take him to Bengal (in the 1760s), but by the time Jones was resident in India, Carnac was resident in Mumbai and then, Manguluru, both of which are on the western coast of the Indian subcontinent, along the Arabian Sea. It does not appear that Jones ever travelled to the western coast of India. Did Carnac bring the manuscript back to England and give it to Jones before India? Did they meet in India and exchange the manuscript? Did the manuscript go through others’ hands before Jones? It seems most probable that Carnac might have given Jones the manuscript in India, possibly in Bengal. In May 1787, for example, John Carnac, also a member of Jones’ Asiatic Society, despite being resident in Mumbai, gave six ancient plates to the society that he had come across (Asiatick Researches, 1:356). Unfortunately, MS RSPA 109 remains unmentioned in both Jones’ letters and the volumes of Asiatick Researches, but the interaction proves the two men certainly knew each other and were part of a broader culture among the English colonial officers of manuscript exchange.

These miscellanies, then, are two of the more curious aspects of the collection that both warrant further study and highlight the diverse nature of the collection. Jones was not only set about collecting classic works that today would form part of a Persian Poetry 101 class at university; instead, he was collecting literary works in a wide array of genres and styles, including these miscellaneous manuscripts that would have given him access to a great amount of literature not represented elsewhere in his collection.

Jonathan Lawrence, DPhil candidate at the University of Oxford, and former doctoral placement at the British Library