Written in your palm, just read it!

We all wish to know the future. Wouldn’t it give us peace of mind if we knew what is waiting for us? Our Hebrew collection offers a fair number of manuscripts discussing different kinds of divination techniques. Perhaps the most well-known form of foretelling the future is palmistry, or chiromancy (from the Greek words kheir = hand and manteia = divination). If you want to know your future, you just have to consult a palmistry manual or show your hand to a person knowledgeable in this field.

This ancient divination technique appeared first in Judaism in late antique mystical circles, and became popular much later among medieval kabbalists. The most fundamental kabbalistic work, the Zohar ( The Book of Splendour) discusses hand and face reading at length, but many other sources also mention hokhmat ha-yad (the science of the hand). The early 13th-century kabbalist Asher ben Saul relates about the following custom:

“[At the conclusion of the Sabbath] they used to examine the lines of the palms of the hands, because through the lines on the hands the sages would know a man’s fate and the good things in store for him.” (Sefer ha-Minhagot)[1]

Even a harsh critic of the kabbalah, the famous Venetian rabbi Leon Modena, mentions palmistry in his autobiography: “The time of my death is predicted for the age of fifty-two, approximately, and I am fifty now. Palmistry also indicates that it will occur about the age of fifty.” [2] He died in 1648 at the age of 77.

Our forthcoming exhibition entitled Hebrew Manuscripts: Journeys of the Written Word will display a short treatise on the topic from a Jewish manuscript from 18th-century Tunis. 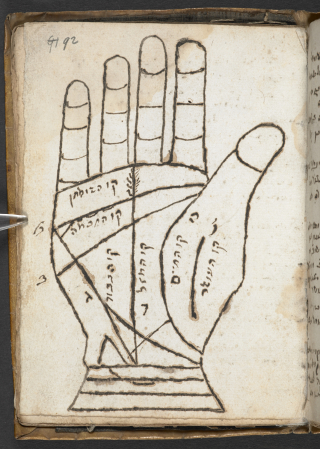 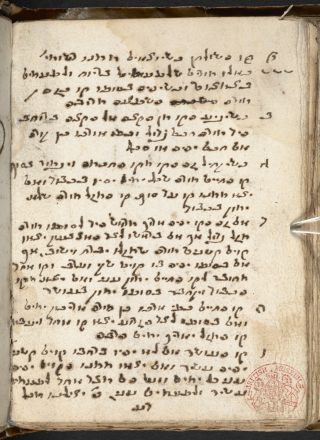 The treatise is indeed very short, occupying two pages (ff. 91v-92), and is located at the end of a medical work by the physician Isaac Haim Cantarini. It was placed here perhaps because palmistry was often considered as a useful supplement to medicine. This work discusses merely six major lines of the palm: table line, wisdom line, honour line, fate line, life line, and wealth line, and is accompanied by a full-page diagram. Here is the translation of the entire work (except for half a sentence in the explanation of the table line, which is rather cryptic for the author of this blog. All solutions are welcome!).

1. The table line: when lines like these [three downward curving lines] coming out of it, they show that … ; when there is a line like this [forward slash] at the end, it shows [that he has] great influence.

2. When this line reaches from one edge to the other edge through the width of the hand, it shows great wisdom, and according to its length it will show if he is wise or an imbecile.

4. If this line stretches from the top of the palm to its bottom, it shows great fortune. But if there are smaller lines coming out of it at the upper end where the fingers are, it shows that his fortune comes and goes. However if at its end there lines horizontally and vertically and one of them intertwines with the life line, he will die poor. And if a line comes out of the honour line and intertwines with the fate line, he will die rich.

5. The length of the life line corresponds to the length of his days. And if it there is a line coming out at the end closer to the arm and [crosses(?)] the fortune line, his days will be long.

The manuscript does not mention the author of this short treatise. The hand diagram is, however, almost identical to that in a printed treatise on palmistry, physiognomy and astrology composed by t    he famous German-Jewish scholar Jacob ben Mordechai of Fulda composed a treatise on palmistry, physiognomy and astrology sometime in the late-17th or early 18th century. Jacob claims that he based his work on ancient authors, among others Aristotle, who - according to Jacob - was converted to Judaism. Could perhaps the diagram in our manuscript be copied from this printed book? 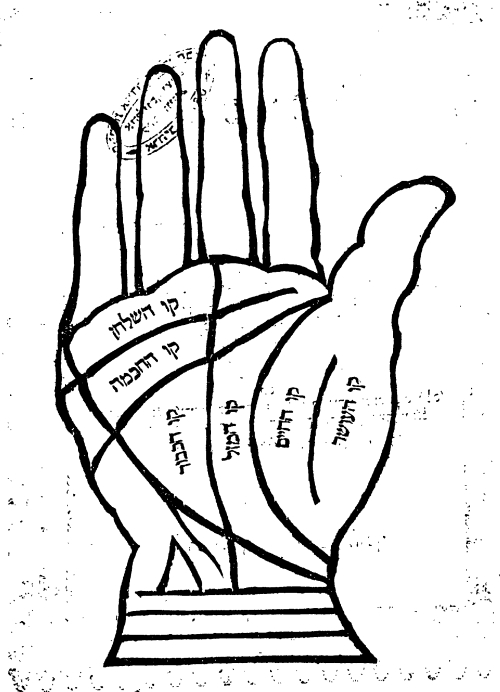 There is one more example of a palmistry diagram in the Hebrew collection. The late 13th-century North French Miscellany offers a more elaborate mapping of the human hand. Here, the short explanations of the lines are inserted into the diagram itself. Although, palmistry is often integrated with astrology, none of these Jewish examples seem to have any connection to it. 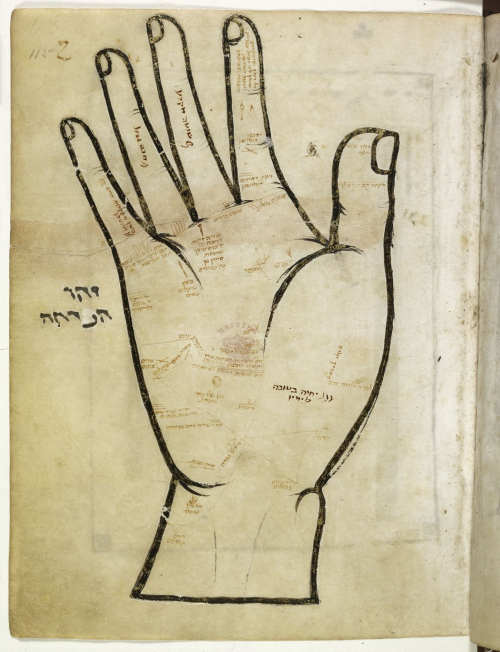 Palmistry is by no means a Jewish invention, and was popular in many cultures. In the British Library collections, you can find some beautifully illustrated works from Christian works on the subject, for instance. Christian authors often justify the use of such divination technique on biblical grounds, quoting the Book of Job: “Is as a sign on every man’s hand, that all men may know His doings.” (Job 37:7); or the Book of Proverbs: “In her right hand is length of days, in her left, riches and honour.” (Proverbs 3:16).These two hand diagrams – a left and a right hand – illustrate a Latin chiromantic treatise in a late 12th or early 13th-century scientific miscellany. It is a pretty early example, since the first Latin manuscripts mentioning the subject are from the 12th century. 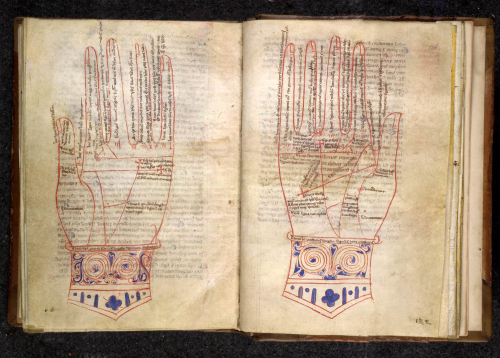 And if you are interested in the relationship between palmistry and astrology, have a look at Introductiones apotelesmaticae elegantes, in chyromantiam, physiognomiam, astrologiam..., by the Carthusian monk Johannes ab Indagine (or Johannes Bremer von Hagen, died in 1537). Here you can see a digitised version of the Latin edition, but the British Library holds several copies of the English translation from as early as 1558 entitled Briefe introductions, both naturall, pleasaunte, and also delectable vnto the art of chiromancy, or manuel diuination, and physiognomy with circumstances vpon the faces of the signes. 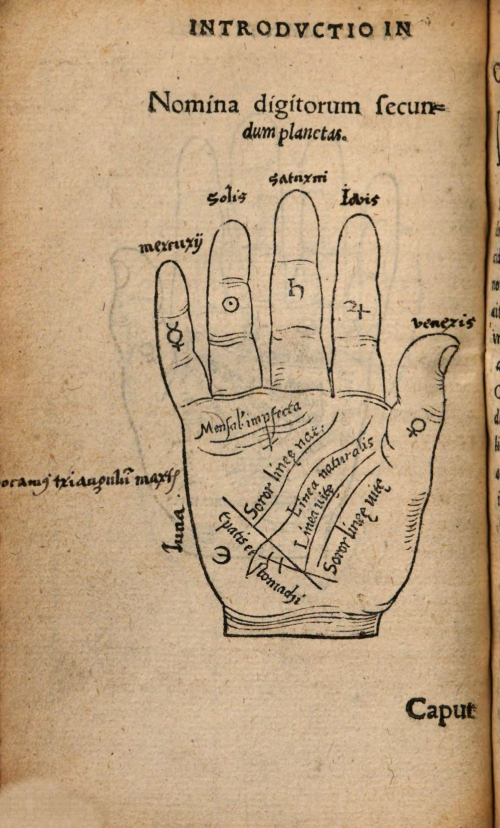 Both Hebrew manuscripts mentioned in this blog have been fully digitised as part of the Hebrew Manuscript Digitisation Project. So if you do not want to turn to a professional palm reader, consult instead these “ancient” sources, and discover the truth written in your palm by yourself!