A Mughal Musical Miscellany: the journey of Or. 2361

Scribal notes in a Mughal-period manuscript of fourteen musical texts shed light on its historical context and the process of its creation. 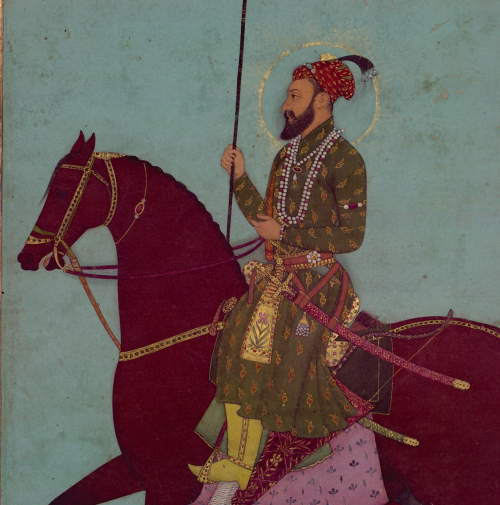 Four years after the accession of the Mughal emperor Aurangzeb (1618-1707; ruled from 1658) [Fig. 1], a senior courtier entitled Dīyānat Khān commissioned a manuscript compilation of fourteen Arabic and Persian texts on music theory. Now held at the British Library as Oriental manuscript 2361, this manuscript is first and foremost a bilingual handbook of important reference works – some the sole surviving copies – on the scientific analysis of sound, rhythm and harmony, as well as practical instruction on instrument-making.

While the significance of its individual texts to Arabic and Persian musicology has long been recognised, the book has not yet been appreciated as a whole. Furthermore, a remarkable quantity of internal evidence testifies to its specific creation process and its historical context within the peripatetic Mughal court. 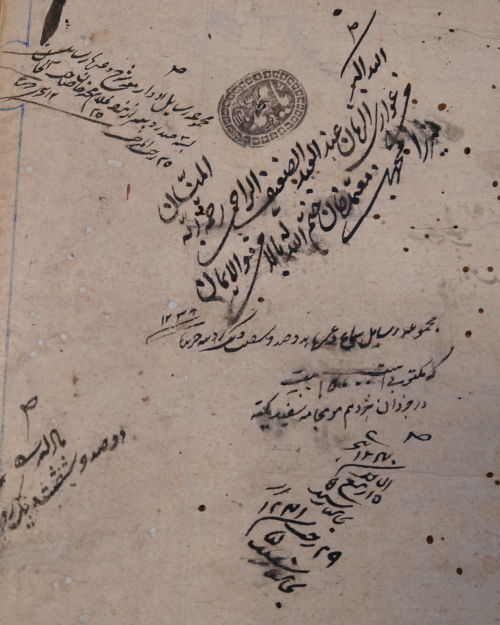 Dīyānat Khān (Shāh Qubād ʿAbd al-Jalīl al-Ḥārithī al-Badakhshī, d. 1672) was a scholar, provincial administrator, and progenitor of a family of intellectuals. According to his grandson Mirzā Muḥammad ibn Rustam Mu‘tamad Khān, a historian who later inherited Or. 2361 [Fig. 2], he was born in Qandahar in today’s Afghanistan, but grew up in India. Complementing his interest in Arab-Persian musicological heritage, Dīyānat Khān also commissioned copies of texts on contemporary Indian instrumentation and performance, as well as on other scientific subjects.

Following Aurangzeb’s recovery from a serious illness in 1662, the imperial court travelled to Kashmir from Shāhjahānābād (Delhi) via Lahore, a six-month journey lasting from December 1662 to June 1663. This massive expedition is documented in an account based on contemporary Mughal court sources, the Maʾāsir-i ʿĀlamgīrī by Sāqī Mustaʿidd Khān. A description of the grand procession was also published in the memoirs of one participant, the French traveller François Bernier (1620-88), who was a member of Aurangzeb’s court until 1668 [fig. 3]. 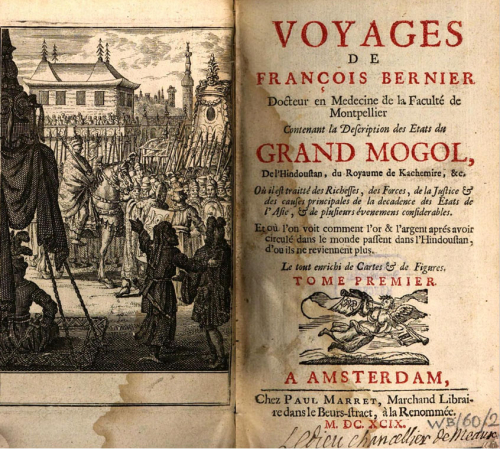 Bernier vividly pictures the complexity of the organisation and the throngs of people who joined this long and difficult expedition. These comprised the whole nobility of Delhi each with their own grand tent, the ladies of the court, the army, and all the attendant servants, porters, and aides-de-camp, as well as numerous beasts of burden including camels, mules, and elephants.

While neither Bernier nor Maʾāsir-i ʿĀlamgīrī mention him, the places and dates recorded in the colophons of Or. 2361 inform us that somewhere among all this travelled Dīyānat Khān, his entourage, scribes, and this unfinished musical manuscript.

A mobile manuscript: begun in Delhi…

Almost the whole process of Or. 2361’s creation can be reconstructed from its detailed colophons (short statements found at the end of a text that record when and where the texts were copied, and sometimes later checked, and by whom), which are particularly informative thanks to the large number of texts and the close attention paid to the work by its patron, Dīyānat Khān.

The book was started in Ṣafar 1073/September 1662 during the lead-up to Aurangzeb’s departure from Delhi, with two Persian treatises on the lawfulness of music and singing, copied back-to-back by a Persian-language scribe, Muḥammad Amīn of Akbarābād (today’s Agra).

Shortly thereafter, six Arabic texts were copied during the four weeks from 17 Rabīʿ I/29 November to 13 Jumādá I/24 December 1662. The first was a short musicological treatise– today the only surviving copy – by the great Arab philosopher of the early Islamic period, al-Kindī (d. 873), followed by a work on Arabic modal structures by the Abbasid courtier-scholar Yaḥyá ibn al-Munajjim (d. 912). 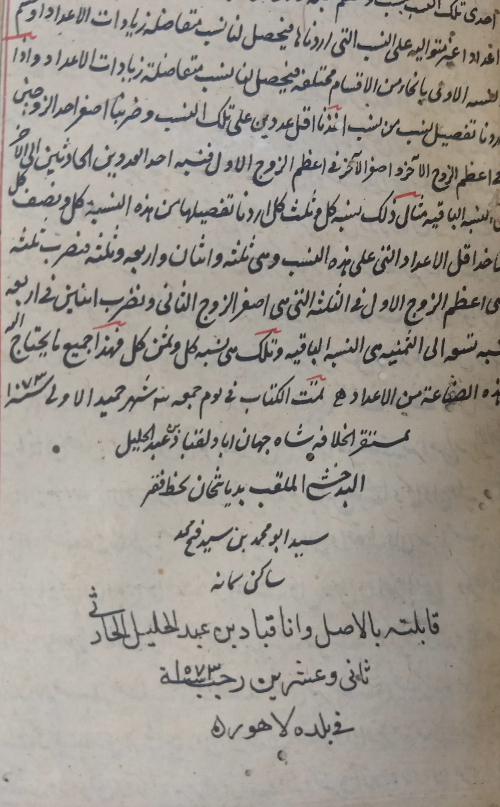 The following Arabic texts are the second version of a treatise by Fatḥallāh al-Shirwānī (d. ca 1453), a unique copy of an earlier work by a disciple of Ibn Sīnā (d. 1037), Ibn Zaylah (d. 1048), and the first part (madkhal) of al-Fārābī’s (d. ca 950) Great Book on Music (Kitāb al-mūsīqī al-kabīr) [Fig. 4]. These were followed by an anonymous commentary on al-Urmawi’s (d. 1294) highly influential musicological treatise, the Book of Cycles (Kitāb al-Adwār).

These works were transcribed by the scribe Sayyid Abū Muḥammad ibn Sayyid Fatḥ Muḥammad Samānī (or Samānaʾī), probably from Samana in Punjab. The other colophons in the manuscript, and the consistency of handwriting throughout, indicate that all the texts within Or. 2361 were written by either Samānī or Muḥammad Amīn alone, specialising in Arabic and Persian respectively.

… continued in Ambala and Lahore… 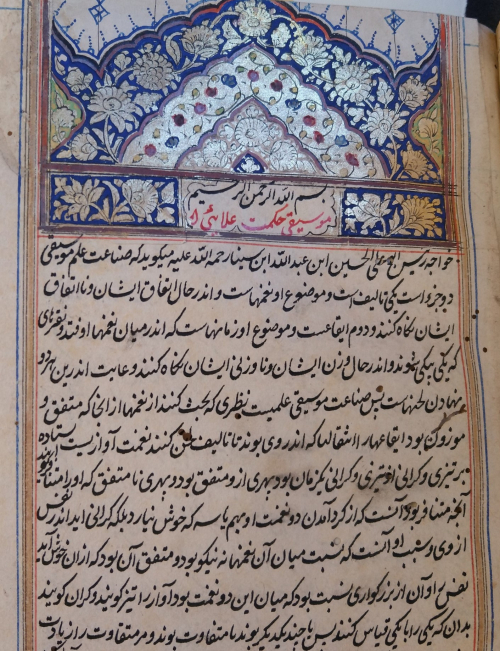 After taking a leisurely route, hunting and managing affairs of state along the way, Aurangzeb and his companions reached Lahore on 10 Rajab/18 February 1663. They then stayed until May, awaiting the melting of snow on the high mountain passes to Kashmir.

It was during the halt in Lahore that Dīyānat Khān’s active involvement in the volume began, with the colophon to al-Shirwānī’s treatise recording that he personally checked the text against the manuscript from which it was copied ‘in the vicinity of Lahore’, completing this task on 9 Rajab/17 February. A couple of weeks later, he also checked the work by al-Fārābī. Meanwhile, Samānī was producing a full copy of the original text of Kitāb al-Adwār, which was completed on 3 Ramaḍān/11 April in Lahore.

Most camp followers did not continue to Kashmir due to the difficulties of traversing the mountain passes and scarcity of supplies, so when Aurangzeb left Lahore in May, Dīyānat Khān took his half-finished manuscript with him to Kashmir, but apparently not the scribes, whose whereabouts are unknown until that December in Delhi, when Amīn copied a Persian song collection for Dīyānat Khān.[1]

Bernier evokes the trials of the journey from Lahore to Kashmir on the imperial Mughal road: the heat of the Punjab, hazardous river crossings by pontoon, and perilous mountain ascents, including a terrible accident which killed several people and elephants and caused Aurangzeb never again to visit Kashmir.

… and reviewed in Kashmir

By early June, the royal party had arrived at Srinagar, called Kashmir Town (Baladat Kashmīr) ‘the heart-pleasing’ (dilpazīr) in the manuscript, and Bernier describes the relief occasioned by the temperate beauty of the landscape [fig. 6]. 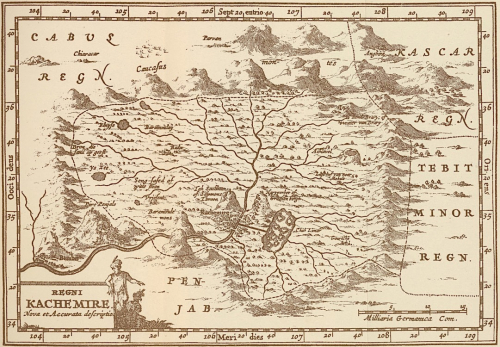 Whilst in Srinagar in August 1663, Dīyānat Khān worked on his manuscript alongside serving the emperor, completing the checking of the two commentaries on the Kitāb al-Adwār and the works by Ibn Zaylah and Ibn al-Munajjim. The Persian-speaking Dīyānat Khān only checked Arabic texts, perhaps indicating a greater written literacy in Arabic than in Persian, the language spoken at court. Dīyānat Khān’s involvement may well have gone beyond checking the texts: seven years earlier he himself added the diagrams to a manuscript written for him in Hyderabad (Deccan), a copy of al-Birjandī’s (d. 1525–6) Treatise on the Construction and Use of Some Observational Devices (al-Risālah fī ṣanʿat baʿḍ al-ālāt al-raṣadiyyah wa-al-ʿamal bihā, British Library IO Islamic 4419) [Fig. 7]. It is also possible that he was responsible for the many diagrams in Or. 2361, a process requiring significant skill and understanding.

Shortly afterwards, Muḥammad Amīn completed the copying of two Persian works, both at the explicit behest of Dīyānat Khān. The first, completed on 19 Rabīʿ II 1075/9 November 1664, was a treatise on fretting by Qāsim ibn Dūst ʿAlī al-Bukhārī, dedicated to the Mughal Emperor Akbar (r. 1556-1605). This was followed back-to-back by a copy of Kanz al-tuḥaf, a fourteenth-century Persian treatise of uncertain authorship on music theory and practice, which includes an illustrated section on the form, manufacture and tuning of nine traditional wind- and string-instruments including the lute, qānūn [Fig. 8], reed pipe and harp. The copy of Kanz al-tuḥaf was completed on 12 Rajab/29 January 1665,checked three days later and then again over three years later, against a copy dated 784/1382-83, belonging to a certain Shaykh Badhan [Fig. 9]. 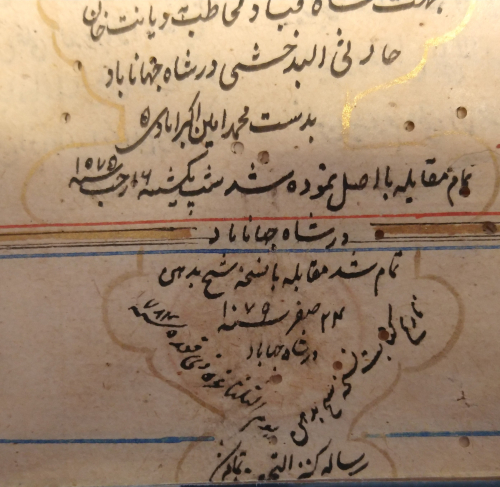 Fig. 9. Colophon to Kanz al-Tuḥaf, recording that it was checked against two different manuscripts over a three-and-a-half-year period (British Library Or. 2361, f. 269v)

The codex as it is today poses some conundrums. The present order of the texts does not follow any consistent system, whether by date of composition or copying, language, or subject matter. It was evidently written piecemeal and bound together, but the original order, if different from today’s, is unknown. Finally, the manuscript’s Kashmiri-style illumination and gold-tooled blue leather binding date from a later period, likely connected with the series of rapid transfers of ownership in the nineteenth century documented f. 2r that culminated in its purchase from ‘Syed Ali, of Hyderabad’ in 1881. The manuscript as originally produced would have been an altogether more sober, scholarly affair.

With such a wealth of internal information, Or. 2361’s significance goes well beyond its musical subject-matter, providing a snapshot of the sometimes highly mobile context of manuscript production at the time. The pages of this volume trace the interconnecting lives of the emperor Aurangzeb, his intellectual courtier Dīyānat Khān, and the latter’s two scribes over a few years, against a moving backdrop of cities, mountains, plains, and royal encampments. A scholarly life was evidently not a sedentary one for Dīyānat Khān.

Fully catalogued and digitised copies of Or. 2361 and IO Islamic 4419 will be uploaded to the Qatar Digital Library as soon as circumstances permit.

For full details on Or. 2361’s musical texts, with a full bibliography, please consult the full catalogue record (note that to see details of the individual works you will need to follow the tab ‘Browse this collection’).