Anglo-Jewish deeds from medieval England- a treasure trove for historians

This blog presents a less known facet of the British Library’s Hebrew manuscript holdings, but which nonetheless constitutes a genuine treasure trove. I am referring to deeds - termed also as ‘bonds’, ‘charters’, ‘grants’ - which form part of a small, yet exceptionally significant collection of Anglo-Jewish historic documents, acquired initially by the British Museum, that are now kept in the British Library. 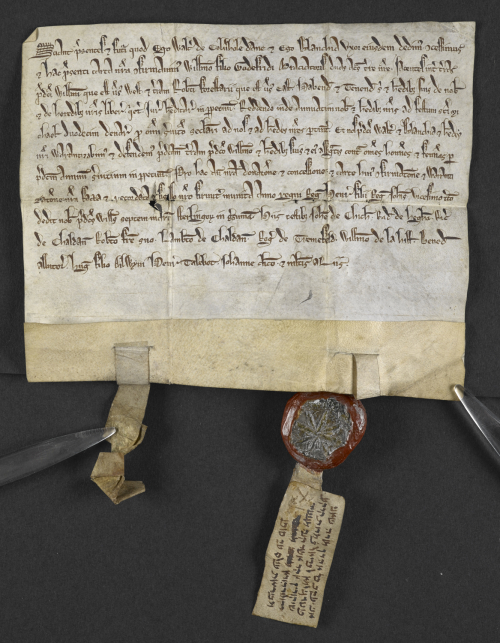 These documents, written in either Hebrew or Latin, and more often than not in both, attest to business interactions between Jews and non-Jews in medieval England, and bear witness to the existence of a dynamic Jewish population prior to its expulsion in 1290. A substantial number of charters came from aristocratic libraries formerly owned by the Earls of Harley, Sir Robert Cotton, 1st Marques of Lansdowne, to name just a few. A lesser amount were acquired from private individuals through donation or purchase.

An interesting, common trait manifest in these charters is the use of Latin Gothic lettering and Hebrew Ashkenazi documentary script, as evident in this Harley example. Another shared characteristic is the material on which the deeds were written, namely parchment. Due to its strength and durability, parchment was perfectly fit for purpose.

Jews in medieval England: an overview

There is no real evidence of a Jewish presence in England before the Norman Conquest of 1066. In 1070, keen to boost England’s economy, William the Conqueror (William I, reigned. 1066-1087) invited Jewish merchants and artisans from Rouen in Normandy to come to England. His principal aim was to collect dues and taxes in currency rather than in kind, and to that end he needed competent financiers to do business with the indigenous population and supply ample quantities of coinage to the royal Treasury.

Few occupations were open to the Jews who settled in Norman England. Apart from a very small number of scholars, physicians and merchants the majority were engaged in moneylending with interest, an activity barred to Christians. 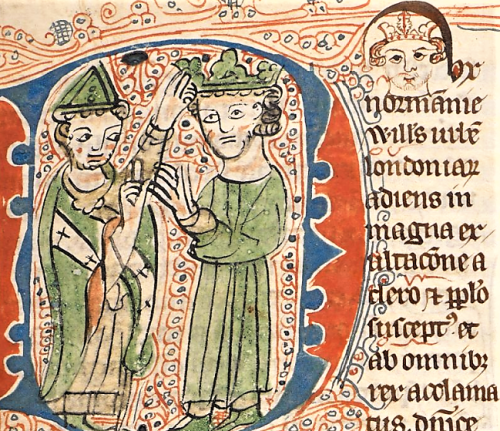 Until the end of the 12th century, successive English monarchs granted the Jews protection and certain privileges which enabled them to prosper and acquire wealth, but this period of relative wellbeing ended with the death of King Henry II in 1189. Under King Richard I and his successors, the Anglo-Jewish communities suffered extreme outbursts of violence, ritual murder accusations, and untenable, repressive measures that culminated in their banishment by King Edward I on 18th July 1290. Jews were not permitted to return to these shores until 350 years later when Oliver Cromwell allowed them to re-settle. 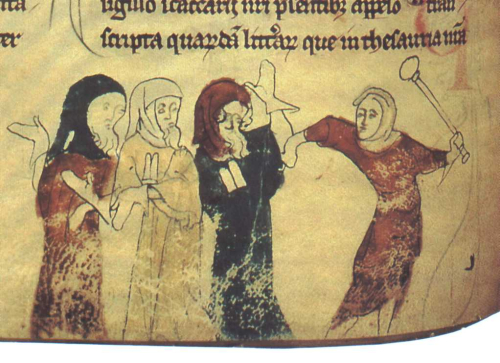 The Exchequer of the Jews

Medieval English rulers regarded the Jews and their assets as personal property, imposing on them heavy taxes to finance wars and crusades and to bolster the royal coffers. The King tolerated their presence as long as they could serve his interests. Despite their being a minority of barely 0.25% of the total English population, the King’s Jews provided roughly 10% of the total crown revenue.

The office of Exchequer of the Jews, which operated from 1194 until the banishment in 1290, was established by Richard I to administer and control the taxes and law-cases of the Anglo-Jewish population. This government office ensured that copies of bonds (chirographs)[1] quitclaims (also called starrs or releases annulling debts to Jewish creditors) and attestations (formal confirmations by signature) were safely locked in special chests (archae) that were installed in major towns. The archae were regularly checked by royal officials in Westminster, who then advised the monarch whether he could impose additional levies and tallages (arbitrary taxes) on his Jewish subjects. 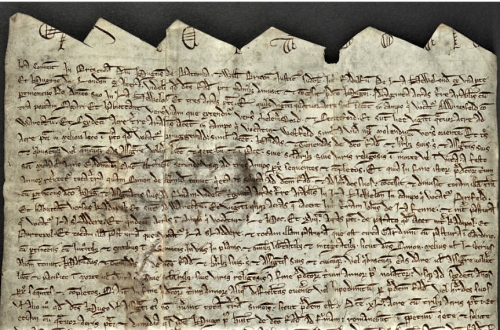 Upper section of a Latin grant of lease of land, with a Hebrew quitclaim written on the verso. Chirograph. London (?), England, 1235 (Lansdowne Ch 30, f. 1r, detail)

Add Ch 1251 dated 1182, is the earliest and undoubtedly the most historically important charter in the collection. Written in Latin, with a Hebrew acknowledgment of Solomon of Paris on the back, it records a £4 debt settlement of Richard de Malebis. Malebis (or Malebisse, denoting mala bestia or ‘evil beast’) was a Norman landowner heavily indebted to Jewish moneylenders. In 1190, in order to get rid of his debts, he instigated a savage mob attack on the Jews of York and their assets. Together with his accomplices, he burned documents specifying money owed to the Jews that had been kept in the York Cathedral for safety. The riot went completely out of control culminating in the massacre of 150 Jewish souls. 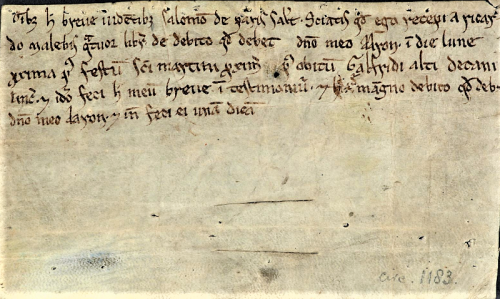 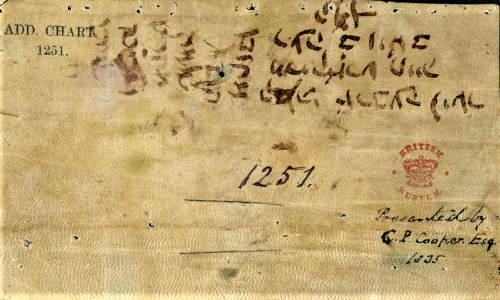 Since Norman England had no established legal practices covering moneylending and other financial dealings, Jewish moneylenders employed their own legal system and terminology based on talmudic law in charters written before 1290, such as the deeds discussed here. The phrase נחנו החתומים מטה מודים הודאה גמורה (Nahnu ha-ḥatumim matah modim hoda’ah gemurah … ‘We the undersigned hereby fully declare that…’) which is still employed in modern day contracts, is a case in point. The use of Hebrew attests to a high degree of literacy among Anglo-Jews, but even more importantly proves that Hebrew was accepted in the fiscal world of Norman England. 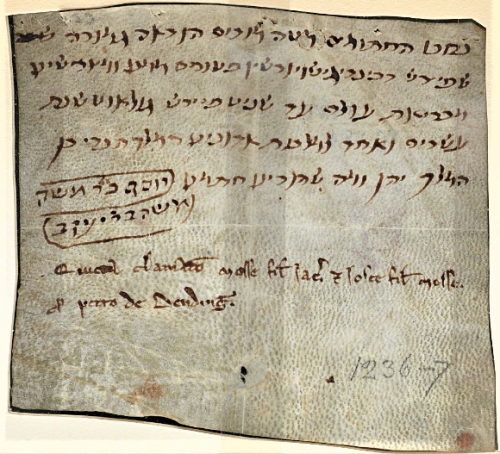 Add Ch 16384 is a Hebrew quitclaim with a Latin docket (an abridged record of the Hebrew text), written for Joseph ben Moses and Moses ben Jacob, releasing Peter de Bending and his heirs from all their debts. It is dated ‘St Peter Gule of August of the year twenty one of the reign of our lord King Henry [Henry III] son of King John’, corresponding to 1st August 1237. Other sources note that Peter de Bending was a heavily indebted landlord whose debts were redeemed by the Priory of Christ Church, Canterbury, which also repossessed his property. During the period 1150-1250, many monastic institutions in England were actively involved in the repossession of mortgaged lands. 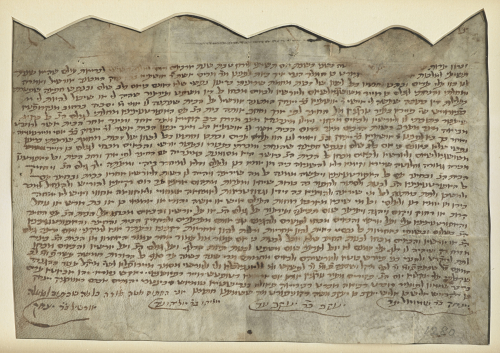 Lansdowne Ch 667 was acquired by the British Museum in 1907 with the collection of Sir William Petty, 1st Marques of Lansdowne (1737-1805). It represents the foot of a chirograph of a Hebrew deed for a house in the parish of St. Peter in Mancroft Street, Norwich, owned by Oshayah son of Isaac of York known as Ursel le Eveske of Norwich, son of Deulecresse that was sold to William son of Roger of South Walsham and his heirs. The Jewish witnesses to the transaction were Abraham of York, Isaac son of Deulecresse, Elias son of Elias, Jacob son of Jacob, Moses of Conisford.

Among the non-Jews witnessing the sale were Simon le Paumier and Robert de Bee. Norwich officials who were present that day included Adam de Toftes, Jacques Nade and John Bate. The deed was attested to by Ursel son of Isaac and is dated 9 Tevet 5041 which corresponds to 2nd December 1280. The sale is preceded by a release of rights to the house by Ursel’s wife Miriam, who owned it בעלילת דין כתובה (‘because of the rights of the ketubah’, i.e. as part of her marriage settlement).

It is interesting to note that it was not unusual for medieval Jewish women, either married or widowed, to own property and engage in business and finance. Indeed many traded locally or became moneylenders to the gentry and church officials.

This charter has been included in the British Library exhibition Hebrew Manuscripts: Journeys of the Written Word that has been postponed until further notice.

The Anglo-Jewish charters have been digitised as part of the major, externally funded Hebrew Manuscripts Digitisation Project, 2013-2020. They are accessible on the Library’s Digitised Manuscripts site.

[1] A chirograph was a legal document copied several times on a single piece of parchment with the word “Chirograph” written across the middle. It was then cut through in a scalloped pattern. This process ensured that the parties to an agreement were each given a copy of the written transaction, which could be easily validated should the need arise; the serrated edges reduced the risk of forgery.