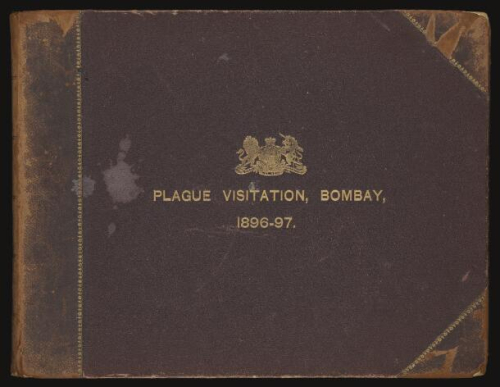 Figure 1. The cover of the Plague Visitation, Bombay 1896-97 photo album held by the Wellcome Collection.

In the British Library album, Stewart contributed 8 albumen prints, while the remaining gelatin silver prints have been attributed to Captain C. Moss of the Gloucester Regiment. The albums appear to have been distributed to various British government officers. For instance, it is likely that the British Library’s photo album had been given to Lieutenant-Colonel Henry Peers Dimmock, the Director of the JJ Hospital in Bombay, by the Bombay Plague Committee. In addition, the images circulated within a larger public sphere (see catalogue record). Photographs from the albums were reproduced in the British weekly-illustrated newspaper The Graphic not long after the production of the album (fig. 2). 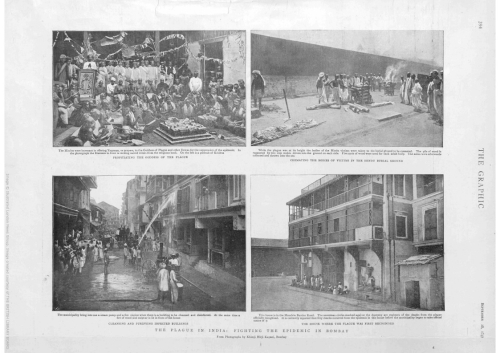 The third pandemic of the bubonic plague began in Yunnan province in southwestern China around 1855 and reached Hong Kong in 1894. From there, the disease spread to other parts of the world, including India, Brazil, Madagascar, and the United States, primarily through maritime trade, resulting in an estimated fifteen million deaths across the world. Twelve of these fifteen million deaths occurred in India. From the very onset of the epidemic, the British government in India invested its full powers to prevent the spread of the disease, implementing invasive and destructive plague control measures at an unprecedented scale. To bring the plague under control the Bombay municipality implemented draconian measures, increasingly so as the epidemic continued to spread through the subcontinent. The colonial state sanctioned British and Indian troops to enter into the private homes of the city’s residents to locate afflicted or deceased persons. The infected were dragged to various hospitals within the city where they invariably died, while their clothes and belongings were burned at street corners. Others were directed into plague camps where they received inoculations while their houses were flushed, fumigated, and lime washed, effectively destroying their possessions in the process (Arnold 1993). Yet, despite these strategies of control, the colonial state failed to contain the disease. As the disease spread across the world, it not only left a long trail of casualties but also a substantial visual archive on the first large-scale bio-political crisis to be captured through the photographic lens in colonial India and worldwide.

Scholars have identified epidemiological photography as a new genre of photography that emerged at the turn of the century—one that brought together the conventions of ethnography and documentary photography to document the broader ecology of epidemics, including factors relating to their outbreak, their modes of transmission, and their destructive consequences (see Lynteris 2016 and Englemann 2017). Indeed, rather than following the conventions of nineteenth-century medical photography, which focus on the physical manifestations of disease, the photographs in the Bombay photo-albums highlight the effects of the plague in the city alongside the colonial state’s role in preventing the propagation of the disease. One sees medical staff and hospitals, preventative measures such as the cleaning of streets and houses, health inspections, corpses and burial grounds, and infantrymen on duty (fig. 3 and 4). 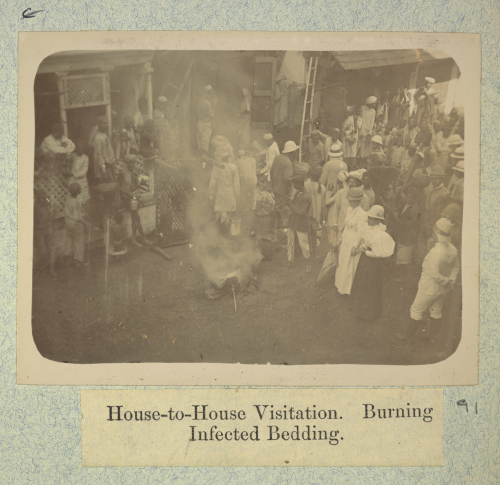 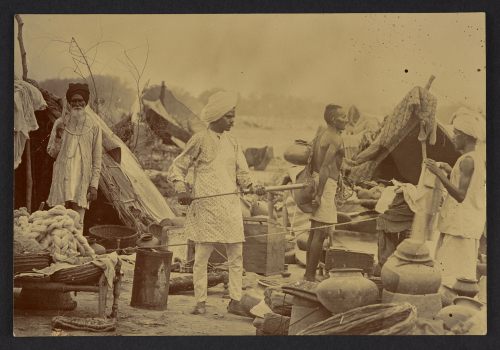 As a whole, the photographs appear to present a narrative of plague reform and colonial intervention. For example, in Stewart’s photograph “Flushing Engine Cleansing Infected Houses,” (fig. 5) one can see government officials flush clean seawater onto tenements that have been contaminated by the plague in order to sanitize the space. 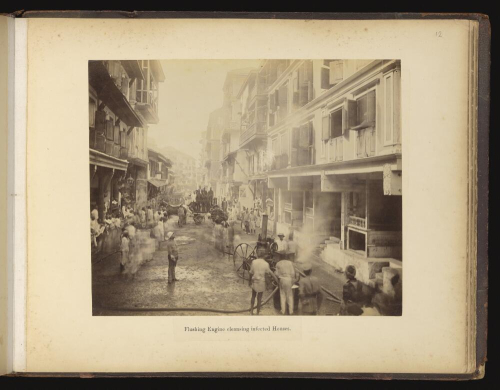 At the same time, the photographs foreground the gradual, even uneven, development of colonial scientific epistemologies and the different fields of thought that constituted discourses of tropical hygiene and medicine. The Bombay photo-albums were produced in the last decade of the nineteenth century, at a time when conflicting theories of disease causation characterized medical discourse. British health officials in London had accepted the germ theory of disease causation, wherein diseases proliferate through the spread of pathogens. However, many colonial administrators found it difficult to discard earlier ideas of disease and miasma and, within colonial scientific discourse, environmental factors such as noxious miasmas, heat, moisture, poor ventilation were believed to be responsible for the causation and propagation of disease (Kidambi 2007, 52). Accordingly, European officials at the time believed that water, specifically seawater, could cleanse infected spaces and flush out diseases, and by the end of 1896, three million gallons of salt water were being flushed daily through Bombay’s drains and sewers to clean the city’s irrigation and sewage systems (Catanach 1998, 146).

In addition to water, air and sunlight were also active agents in the eradication of the plague epidemic in late nineteenth-century Bombay. Captain C. Moss’s photographs, “Plague-stricken houses unroofed to let in sun and air” (fig. 7) depict thatched huts that have been unroofed to allow sunlight and air to enter into their interior spaces. 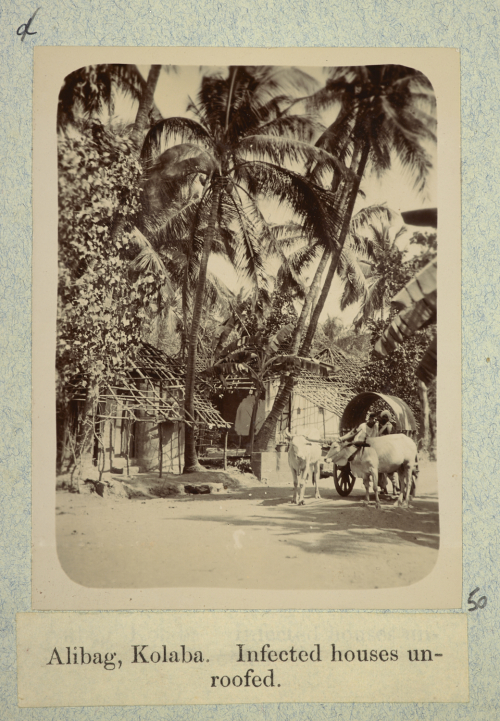 Moss’s photographs not only reflect concurrent colonial epidemiological theories, which focused on the unsanitary and climatic factors that enabled diseases to thrive, but also prefigure the dramatic reconstruction of Bombay facilitated by the colonial government in the early twentieth century in response to the plague pandemic. The government’s new city improvement schemes would include the reclamation of land from the sea, the building of broad boulevards that would bring breezes, deemed healthful, from the ocean to the neighborhoods; and the conversion of local agrarian lands into “garden suburbs.” (see Chopra 2011 and Rao 2012) Thus, the British Library’s photo-album serves as a significant archive of British colonial epidemiological, visual, and urban practices.

Christos Lynteris, “The Prophetic Faculty of Epidemic Photography: Chinese Wet Markets and the Imagination of the Next Pandemic,” Visual Anthropology 29, no. 2, (2016): 118-132.

Shivani Sud is a PhD candidate at the University of California at Berkeley. Her recently published article on the Getty's album is listed above.