This blog is inspired by our temporarily postponed exhibition Hebrew Manuscripts: Journeys of the Written Word. As it happens, among the 39 exhibited manuscripts, there are three that have a hand diagram: a short tract on chiromancy (palmistry), a calendrical work, and a treatise on music.

While diagrams of chiromantic treatises help in revealing the character and fate of a particular person (see our previous blog: Written in your palm, just read it!), other kinds of hand diagrams work more like scientific instruments or visual aids. One of the manuscripts in our new exhibition contains a treatise on the calendar by the little-known Josef ben Shem Ṭov ben Yeshuʿah Ḥai entitled Sheʾerit Yosef (Joseph’s legacy). This peculiar-looking hand diagram below serves as a tool for calendrical calculations. 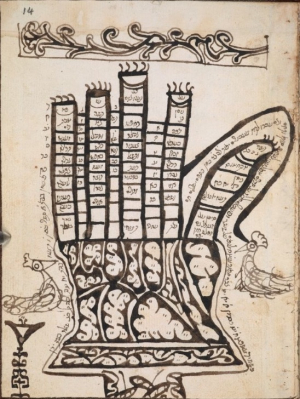 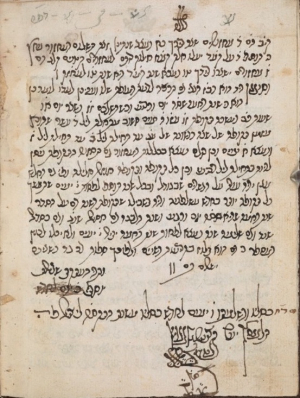 The manuscript has a colophon (literally “final point”), that is, a note that provides details about the production of the manuscript, such as when and where it was copied, who copied it and for whom. According to this colophon (at the bottom of f. 13v), Samuel the scribe copied the manuscript in Tlemcen (today in Algeria) within a week: he started working at the beginning of the Jewish month Kislev, and finished it on 6 Kislev 5565 (November 1804). The hand diagram is placed at the very end of the tract, on the page opposite the colophon.

Neither the technique of reckoning the calendar by using one’s hands nor related hand diagrams are specifically Jewish. Already the famous 8th-century Benedictine monk Bede the Venerable speaks about calculating the calendar with the help of one’s hands:

Some people, in order to simplify calculation, have transferred both cycles, the lunar and the solar, onto the joints of their fingers. Because the human hand has 19 joints if we include the tips of the fingers, by applying each year to one of these joints they begin the lunar cycle on the inside of the left hand… Again, because the two hands together, if you do not count in the fingertips, have 28 joints, they assign the years [of the solar cycle] to these, beginning at the little finger of the left hand. (Bede, The Reckoning of Time, translated, with introduction and commentary by Faith Wallis (Liverpool: Liverpool University Press, 1999), p. 138)

A beautifully illustrated astronomical and calendrical miscellany from around 1300 offers an excellent Christian example of such hand diagrams. The illustration is spread over two consecutive pages providing a visual aid for the reader of Balduinus de Mardochio’s tract (f. 5v). 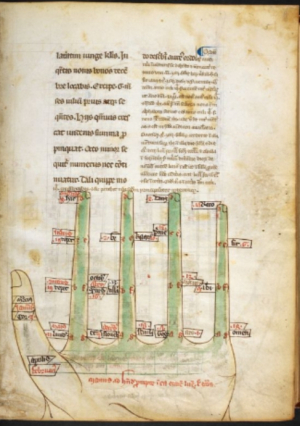 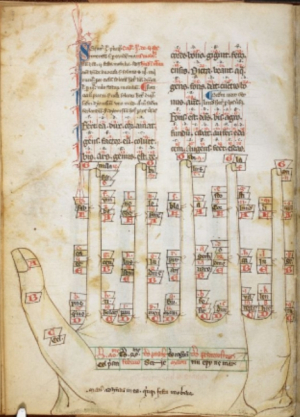 Since one of the most important roles of calculating the calendar has always been to determine the dates of certain religious festivals, Hebrew calendrical hand diagrams are not identical to their Christian counterparts. While the Gregorian calendar is solar, the Hebrew calendar is a lunisolar, that is, its months are based on lunar months and its years are based on solar years. The sum of 12 lunar months is some 11 days shorter than the solar year, therefore every two or three years an intercalary month is added to the year (in these years, there are two months of Adar: Adar I and Adar II). The years with 13 months are called leap years, while the years with 12 months are the ordinary years. Why is it important to adjust to the solar year? Because festivals are often connected to specific agricultural seasons, which correspond to the solar year (the time taken by the earth to make one revolution around the sun). Therefore, if you want the festivals to fall within the right season, you need to keep your calendar “true with the sun”, that is, adjusted to the solar year.

To cut a long story short, Hebrew calendrical hand diagrams serve as tools to calculate the exact time of the four seasonal turning points (tekufot) in ordinary and in leap years. These are:

By calculating these turning points, it is possible to determine the correct dates of the religious festivals. These Hebrew diagrams are often accompanied by a rhyming mnemonic to help memorise the rules. To help you imagine these short mnemonics, think of the old English rhyme:

Thirty days hath September, April, June and November,
All the rest have 31, Except the second month alone,
To which 28 we assign, And leap year gives it 29.

Another copy of the tract Sheʾerit Yosef from late 18th century Morocco displays a less intricate diagram than its copy from Algeria. The caption above the diagram reads: And now I will present you this strong hand so that you know from it the seasons of Samuel, so that you can learn from it their days, their hours, and the day of asking for rain… [the day on which Jews begin reciting the prayer for rain, occurring during the pilgrim festival of Sukkot]. 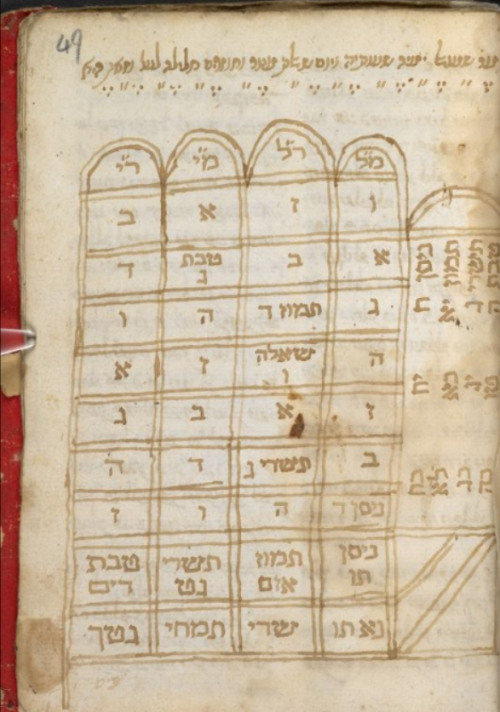 Moreover, similar hand diagrams were included into the so-called Sifre evronot (‘Books of Intercalations’, from the root עבר meaning ‘pregnancy’ or ‘intercalation’). Such calendrical manuals were especially popular in the 17th and 18th centuries. A late-17th century Sefer evronot by Isaac Katzenellenbogen of Prague contains a hand diagram with elaborate floral motifs, in a style reminiscent of folk art. The caption above the diagram reads luaḥ ha-yad, that is, hand calendar. Another, less embellished example is a copy of Eliezer ben Jacob Berlin’s Sefer evronot from the mid-18th century. Both of these diagrams are based on the same principle as the diagrams in the Sheʾerit Yosef. 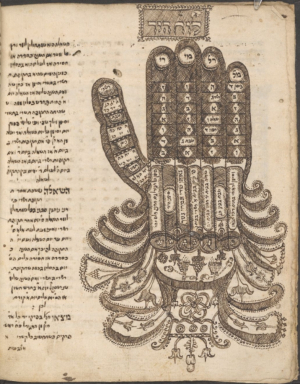 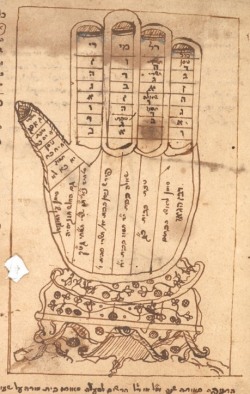 The origin of this Jewish version of calendrical hand diagrams is not clear. According to one tradition attributed to Joseph Vecinho, who may or may not have been the physician of the Portuguese king John II (d. 1495), and who may or may not have given calendrical tables to Christopher Columbus, this Jewish method of finger reckoning was invented by Vecinho’s teacher, the famous Spanish astronomer Abraham ben Samuel Zacuto (1452-ca. 1515). However, the mysterious figure of Joseph Vecinho could be the topic of another blog! And if you wish to know exactly how to calculate the beginnings of the seasons on your hand, consult the literature below.