Suthon and Manora: A jewel of Thai literature, art and performance

The poetic story of Suthon and Manora (สุธนมโนห์รา) is one of the most popular Thai literary works and has inspired fine art and the performing arts in Thailand. The theme of the story is rooted in an early Sanskrit text with the title Sudhanakumāravadāna which is included in the Divyāvadāna, a collection of biographical narratives of important figures in early Buddhist history, dating back to the third or fourth century CE. Another related Sanskrit source is the Kinnarī Jātaka in the Mahāvastu, a preface to the Buddhist monastic code. Based on a Pali translation of the Sudhana Jātaka, an extra-canonical Birth Tale of the Buddha (Paññāsa Jātaka) created in northern Thailand around the fifteenth century, two poetic versions (klon suat) of Suthon and Manora were then composed in the Thai language: one showing a central Thai origin and another with a southern Thai cultural context. However, the story is also known in the Lao, Khmer, Mon, Shan and Burmese literary and performing traditions. Scenes from the legend based on the early Indian sources are depicted in a painting in cave 1 at Ajanta (5th century CE) in India and on twenty relief panels on the first terrace of Candi Borobudur (8th/9th century CE) in Indonesia, the largest Buddhist monument in the world.

Text passage from the story of Suthon and Manora in a Thai folding book. Thailand, 19th century (British Library, Or.8851 f.15)

At the centre of the story is Kinnari Manora (กินรี มโนห์รา), a female mythical figure with a human head and upper body and the lower body of a bird. Kinnari, and their male counterparts, Kinnara (กินนร), are believed to live in the the mythical realm of half-bird-half-human beings beyond the Himavanta forest, which is inaccessible for humans whereas Kinnara and Kinnari have the ability to enter the human realm. Manora lives happily as a princess in the world of Kinnara (plural). However, one day while taking a bath in a lake of the human realm, she is captured by a hunter with a magic noose and is forced to remain in the world of humans. Here she meets Prince Suthon, heir to the kingdom of Uttarapancala, and subsequently the two fall in love and get married. 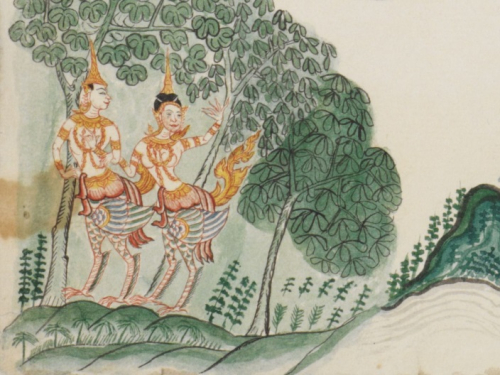 A pair of Kinnara in the mythological Himavanta forest depicted in a collection of drawings on Thai cosmology and mythology. Thailand, 1824 (British Library, Add MS 27370 sheet 3)

However, because of conflict in the kingdom Prince Suthon is sent away to subdue a rebellious vassal. A jealous court counselor misinterprets a dream of the king and requests the sacrifice of Manora. She flees the kingdom and returns to the realm of Kinnara, leaving her beloved Suthon behind. When he returns and discovers that Manora was forced to leave, he chases after her. Despite the perilous journey to the realm of Kinnara, he proves his love for Manora to the king. Finally, the two lovers are reunited and return to the human realm and live happily ever after.

The two poetic versions in Thai language adhere to the Pali version of the Sudhana Jātaka in all major and minor details, however, they are not actual translations, but versified re-tellings of the story. The Thai texts also emphasize and embellish the natural setting of the tale in line with the characteristics often found in Thai literature and art. While the figure of Suthon enjoys the status of a Bodhisatta (Buddha-to-be), the figure of Manora represents ideal beauty, set in a Thai stylistic framework for the story that employs description and digression, epithets, metaphors and similes. Front cover of the book "Phra Suthon Manora", retold by Phongchan and published by Sermwit Bannakhan publishing house, Bangkok, in BE 2524 (1981 CE)

Numerous print publications containing the story of Suthon and Manora have appeared in Thai language in the past hundred years, mainly for pleasure reading and as juvenile literature.

Various translations were made into European languages: a French translation by Jean Drans was included in his publication with the title "Histoire de Nang Manôra et histoire de Sang Thong: deux récits du Recueil des cinquante Jâtaka. Traduits du siamois" (Tokyo, 1947). A translation into German by Christian Velder appeared in the book "Muschelprinz und Duftende Blüte: Liebesgeschichten aus Thailand" (Zurich, 1966). Henry Ginsburg, while working on his dissertaion "The Sudhana-Manohara tale in Thai: a comparative study based on two texts from the National Library, Bangkok and Wat Machimawat, Songkhla" (SOAS University of London, 1971) made a translation of the story from Thai into English, now held at the British Library (Or.16758).

The southern Thai tradition of Suthon and Manora also relates to a popular dance-drama known as manora or short nora (โนรา), which appears to borrow its name from the heroine, Kinnari Manora, although the story itself is not re-enacted in the dance performance. While carrying out research for his dissertation in Thailand, Henry Ginsburg was able to attend a nora performance, which is documented in his photo collection (Photo 1213). 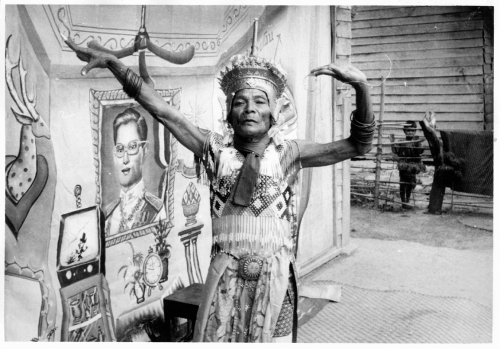 There are two types of nora dance: one is performed in a ceremonial context, known as nora rong khru (โนราโรงครู), and the other is for entertainment.

Nora rong khru is an important ritual dance for professional nora performers. Its purpose is to invite the ancestral spirits of the great nora masters of the past in order to pay homage to them. The ritual involves making votive offerings to the ancestral spirits, and the initiation of novice dancers. The full version of the ritual dance, which lasts three days and nights, is a highlight of events in the community. It usually is performed once in a year, or every three or five years, depending on the traditions of the different nora schools. A shorter version of the ritual can be performed more frequently and lasts only one day and one night.

Nora performances for entertainment can be held at any time, and they can have a competitive character. They allow dancers - novices and masters alike - to demonstrate their talents and their skills which can combine the dancing with singing. The dance is characterised by striking body poses which require many years of practice. Normally such performances do not focus on telling a story, but the dancers may decide to include episodes from well-known stories like Suthon and Manora to entertain the audiences. One of the most popular scenes to be performed is the scene of the huntsman capturing Manora. Entertainment performances always include at the beginning a song to pay homage to the teachers and the great ancestral masters of nora, and a solo performance of the current master of the school or dance troupe. 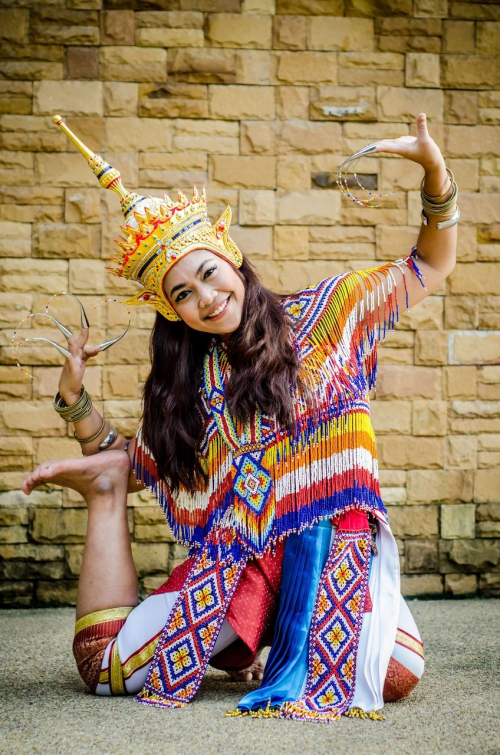 Kanit Sripaoraya, a Ph.D. candidate and a nora practitioner performs one nora movement in the pose of ‘the sitting of Kinnara’ (in Thai 'Kinnon-nang', กินนรนั่ง), 29 September 2014. © Photograph courtesy of Kanit Sripaoraya.

Nora dances are often performed on a makeshift stage made specifically for this purpose in the community. The back of the stage is formed by a large colourful painting on cloth or a curtain. An orchestra which comprises mostly of percussion instruments determines the speed and rhythm of the dance. The most striking element of the requisites for nora performances are the costumes of the dancers who can be male or female. The costume of the principal performer who is called nora yai is made of beads in various colours which are arranged in geometric patterns. Other components include an elaborately decorated headgear, a pair of wings attached to the costume, a pendant, a decorative tail, a wrap-around skirt, a pair of calf-length trousers, additional pieces of cloth hanging down from the waist, bracelets and fingertip extension pieces. The other dancers do not usually have a pendant and wings. The attributes related to birds (wings and decorative bird tail) can be seen as a reference to Kinnari Manora, the half-bird half-human heroine of the tale of Suthon and Manora. 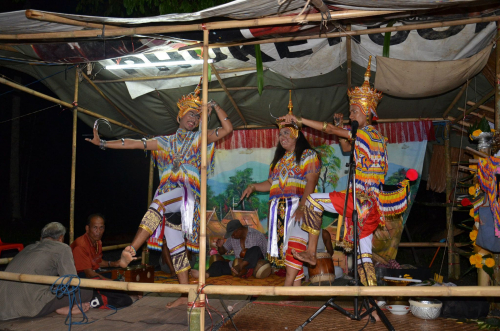