The Miftāḥ al-Fużalā or Key of the Learned of Muḥammad Dā’ūd Shādiyābādī (BL Or 3299), a multilingual illustrated Persian dictionary written in 1468 gives us glimpses into the ephemeral life of the sultanate of Malwa in Central India. This illustrated dictionary (farhang) has quadruple the number of illustrations (179 in total) as Mandu’s famed Ni‘matnāmah or Book of Delights (BL IO Islamic 149), but it has mostly escaped scholarly attention until recently. It has been attributed to 1490 based on its paintings’ close relationship to a contemporaneous Shirazi idiom. Like the Ni‘matnāmah, it is a unicum and no other known illustrated versions survive. Other works by Shadiyabadi include a vernacularised Persian transcreation of al-Jazarī’s twelfth-century Arabic book on automata (Wonders of Crafts, ‘Ajā’ib al-Ṣanā‘ī, BL Or 13718) and a commentary on the Persian poet Khāqānī’s oeuvre (Bodleian MS Fraser 63).

My doctoral thesis, Wonder Reoriented: Manuscripts and Experience in Islamicate Societies of South Asia (ca. 1450–1600)—a study of the corpus of Islamicate cosmographies and related wonder manuscripts in South Asia—was prompted by the Miftāḥ. My work on the Miftāḥ and the ‘Ajā’ib al-Ṣanā‘ī led me to conduct a global search of early-modern manuscripts devoted to wonder and the cosmos made in South Asia. Through a philological and codicological analysis of the Miftāḥ my thesis argues that the experience of this book generated a playful, didactive soundscape and its form and function owed much to the genre of the Islamicate cosmography (‘ajā’ib al-makhlūqāt). The definitions contained in the Miftāḥ shed light on nearly every aspect of early-modern material culture including metalwork, textiles, arms and armour, food, and architecture. As a happy diversion from today’s world, here I present some of the toys from the Miftāḥ. The Miftāḥ’s large, well-spaced nasta‘līq writing suggests that it may have been intended for a young learner, likely a child. The inclusion of several entries devoted to toys also implies a child reader. For example, the first illustrated entry one encounters in the Miftāḥ is for the term dolls. Shadiyabadi defines ‘bādajan’ as “dolls that young girls make clothes for and play with, and in Hindavi they are called ‘guriy[a]’.” (fig. 1). Like a child playing with their early-modern Cabbage Patch Kids, the entry shows a young girl putting her three dolls to bed. It captures a lost moment of childhood play from the past. 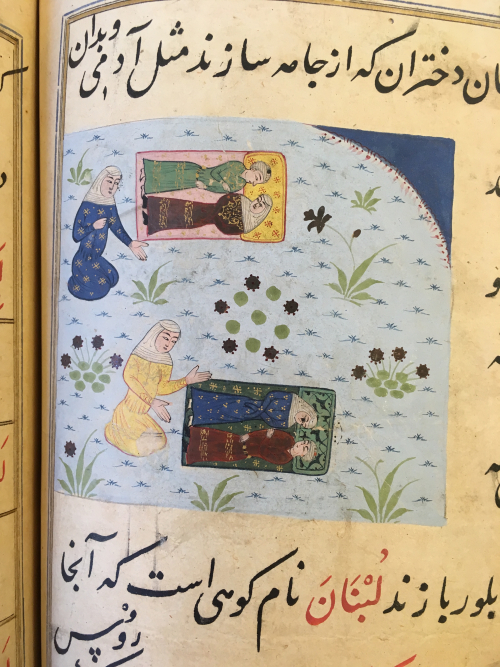 To work on the Miftāḥ I developed a finding aid in Excel that allowed me to notice how its craftsmen created several visual synonyms. So, for the word ‘bādajan,’ we have the visual synonym of ‘lahfatān’ (fig. 2). Shadiyabadi states that these are dolls for which young girls (dukhtarān) make clothing and play with. This entry, however, does not include the Hindavi equivalent. 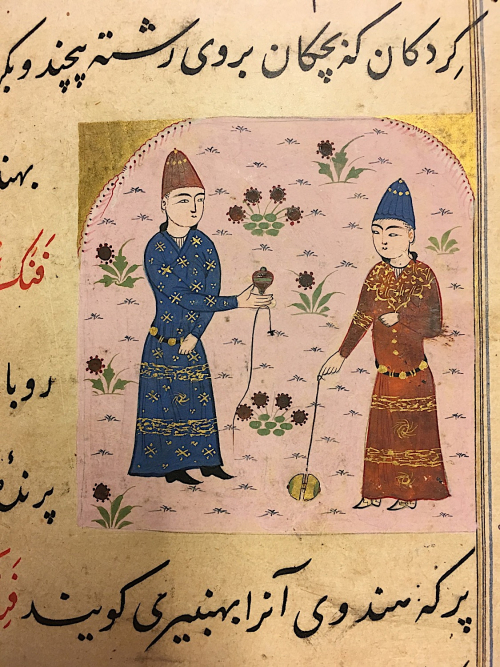 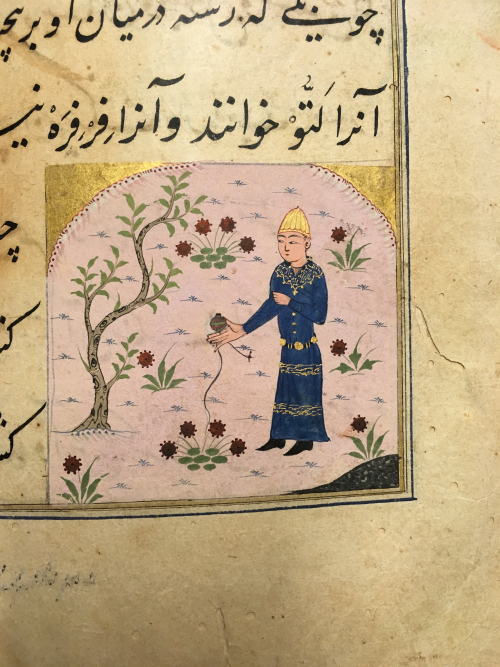 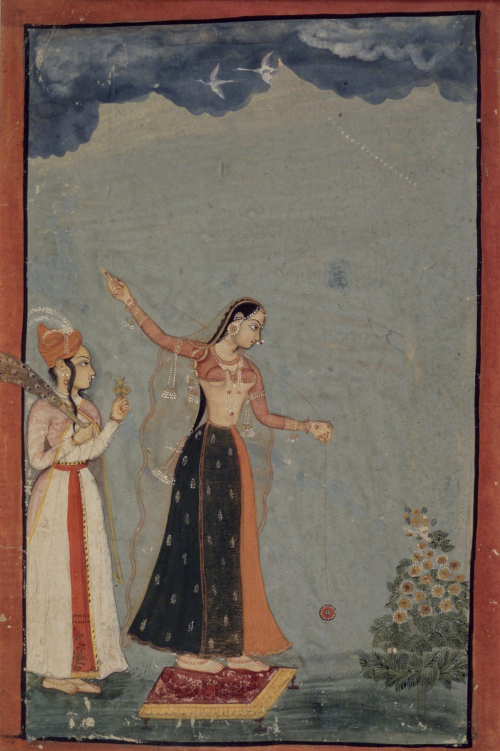 In addition to dolls, the Miftāḥ contains entries on toys that one would recognise from South Asian art more broadly. For example, it devotes an entry to the whip-top or yo-yo which Shadiyabadi calls a farmūk in Persian and laṭṭū in Hindavi (fig. 3). It too has a visual synonym in the word bādfarah that is also accompanied by its Hindavi equivalent (fig. 4). These yo-yos, like many of the crafts and objects depicted in the Miftāḥ, can be found in numerous other examples. There are several Rajput paintings of ladies playing with yo-yos, for instance (fig. 5). The Miftāḥ gives words to these objects in both Persian and Hindavi thereby allowing art historians to come closer to these objects through philology. 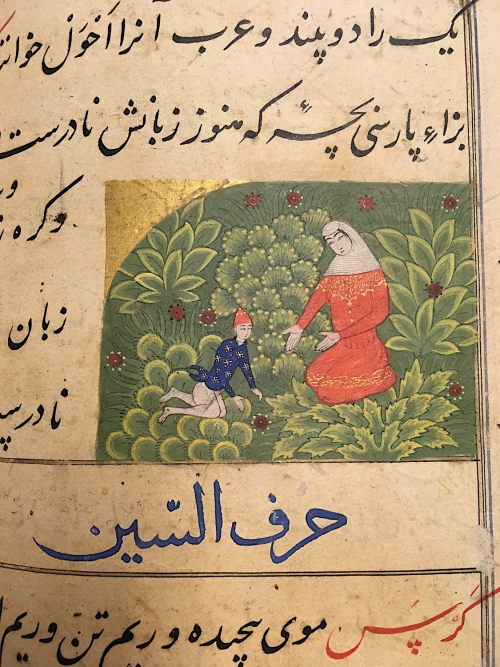 By way of one final example, a teaser for forthcoming work on the Miftāḥ’s sonic elements and sultanate soundscapes, I offer the definition of kazhmazh. Shadiyabadi defines kazhmazh as the child whose language is still not fully developed. The word itself is onomatopoetic, suggesting a childlike babble. The painting depicts a larger woman, probably the mother, speaking to her son. The child is comparatively much smaller. As we know so little about childhood and play in early-modern India, this illustrated definition gives us one vision of that ephemeral world. We can both hear and see the child struggle to correctly pronounce words correctly. It, along with the entries devoted to toys, draw us into a world of the pleasures of sultanate children.

I dedicate this piece especially to my nieces Anika and Zarina Tekchandani.

Vivek Gupta, PhD History of Art at SOAS, University of London; Postdoctoral Associate in Islamic Art at the University of Cambridge based at the Centre of Islamic Studies (from September 2020); and former doctoral placement at BL Asian and African Collections