At the crossroads of cultures: a Hebrew manuscript of Johannes Sacrobosco’s De sphaera mundi

The first printed books were often imitations of manuscripts in their layout: the same types of letters and the same letter combinations (ligatures) were used, and often the same illuminators added the decorations by hand in the same style they used in manuscripts. Handwritten books however did not just disappear with the introduction of printing. What is more, sometimes printed books influenced the layout and decoration of manuscripts.

One of the items in the British Library’s postponed exhibition Hebrew manuscripts: Journeys of the Written Word contains the Hebrew translation of Johannes Sacrobosco’s De sphaera mundi (On the Sphere of the World). The Hebrew title of the work is Sefer mareh ha-Ofanim (The Appearance of the Heavenly beings). The manuscript (Or 10661) was copied sometime in the sixteenth century, and its illustration program was heavily influenced by early printed Latin editions of the same work.

Johannes Sacrobosco or John of Holywood (died 1256) was an Augustinian monk and scholar, probably from Halifax, Yorkshire. He taught mathematics at the University of Paris. In 1220, he composed a short introduction to astronomy entitled De sphaera mundi that was based on the geocentric model of the universe with a stationary Earth in its centre. The Sphaera soon became the standard textbook on the subject up until the mid-seventeenth century. It is worth noting that though Nicolaus Copernicus (died 1543) published his On the Revolutions on the heliocentric cosmos in 1543, his theory gained acceptance only gradually.

Sacrobosco’s Sphaera is divided into four chapters: Chapter 1 is on the general structure of the universe; Chapter 2 is on the circles of the celestial sphere; Chapter 3 is on the daily rotation of the heavens and the different climates of the Earth; and Chapter 4 is on planetary movements and eclipses. Some manuscripts of the Sphaera did contain a few illustrations, but diagrams became a prominent feature of the work only in the early printed editions. The Sphaera was first published in Latin in 1472. This first edition had no printed illustrations, but the printer left some space in the text for the readers to add their own diagrams by hand if they decided to do so. The first printed diagrams were added to the 1478 Milan edition by Filippo da Lavagna, and the full set of illustrations appeared a decade later in the 1488 edition published in Venice by Johannes Santritter. 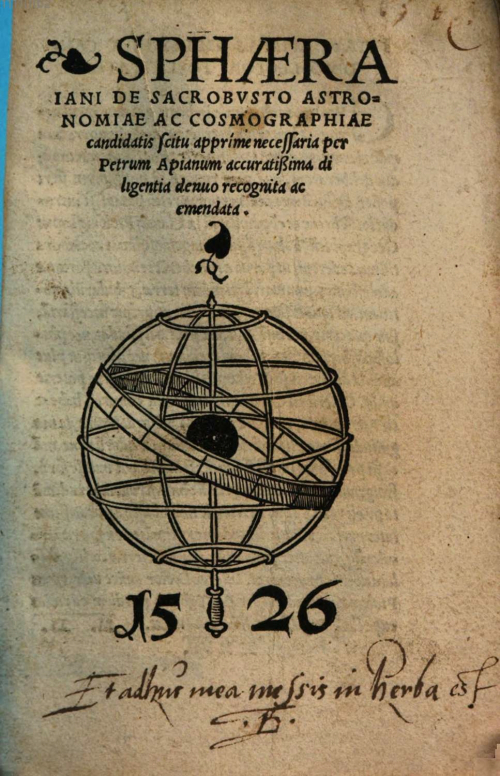 Arabic and Latin scientific works were not unknown to medieval Jewish scholars. Some could read them in the original language (mostly in Arabic but some also in Latin); others accessed them in translation. In the twelfth to fourteenth centuries, Provence and Italy were especially important centres of Jewish translating activity. These multilingual Jewish translators played a significant role in providing access to Greco-Arabic and to a lesser degree Latin scientific literature for those who did not read these languages.

One of these scholar-translators was Solomon ben Abraham Avigdor, a Provençal scholar who prepared the first Hebrew translation of Sacrobosco’s work in 1399. Solomon’s father Abraham, who was himself a translator and a physician, studied medicine in Montpellier, and translated mostly medical works from Latin into Hebrew. As he says in the preface to his translation of Bernard Gordon’s Introduction to the Practice: “I went up on the mountain therefore, that is to say, the city of Montpellier, in order to study the medicine from the mouth of the Christian scientists and erudites.” Father and son worked together on the translation of Arnaldus de Villanova’s Capitula astrologiae, a work on the application of astrology in medicine. Just like his father, Solomon studied medicine. Later in his life he converted to Christianity.

Not much more is known about Solomon, but his translation of the Sphaera has survived in some 40 manuscripts. Apart from the manuscript included into the exhibition (Or 10661), the British Library has two more complete copies of this Hebrew translation ( Add MS 27106 ff. 103r-130v, Add MS 27146 ff. 1r-10v) and a fragment (Or 10498). We have chosen Or 10661 not only because of its fine layout and beautiful diagrams, but because it is an excellent representation of cultural encounters. On the one hand, it demonstrates how non-Jewish scientific knowledge reached Jewish scholars through crossing language borders; on the other hand, it shows how the world of manuscripts meets the world of printing. 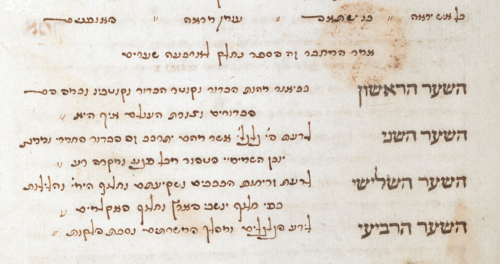 List of the four chapters of the Sphaera in Solomon Avigdor’s Hebrew translation. (Italy, 16th century. Or 10661, f. 1v)

One of the images which became part of the Sphaera’s illustration program at a very early stage was the armillary sphere. It was added to the illustrations in the 1488 Venice edition. This device was invented over 2000 years ago for instruction and observation, and was developed further by medieval Muslim astronomers. Sacrobosco does not mention it explicitly in the Sphaera, but some commentators assumed that in certain places in the text he is describing this astronomical device rather than the universe itself. The discussion of the celestial circles in Chapter 2 can especially be read as a description of the armillary sphere. 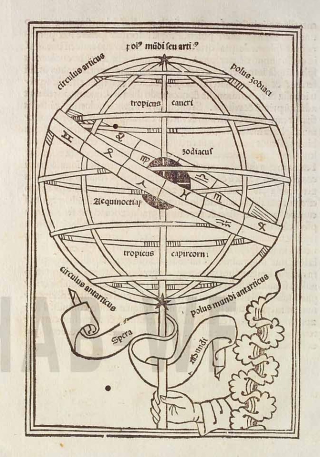 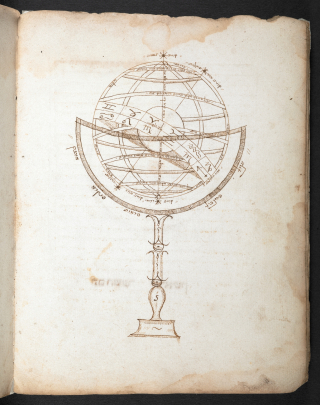 It is not surprising, then, that in our Hebrew manuscript we find the armillary sphere at the beginning of Chapter 2. This image and the image in the 1488 Venice edition are very similar. Both depict a geocentric sphere modelling a universe with the Earth at its centre. The set of rings represents a series of moving spheres around a stationary Earth. The wider band with the signs of the Zodiac represents the annual journey of the sun through the heavens.

Petrus Apianus’ 1526 Ingolstadt edition was another milestone in the development of the illustration program. Several of the diagrams in our Hebrew copy follow the tradition established by this edition. Let’s have a look at the diagram at the section explaining why the sphere of the water must be round. The diagram in the earlier BL Hebrew manuscript (Add MS 27106) is very confusing, and even the one in the 1488 edition is a bit vague. The Apianus edition introduces a much clearer diagram: the sphere of the water is round because, travelling in a ship, the person at the top of the mast sees the buildings on dry land sooner than the person on the deck. You can see that the visual ray from the person at the top of the mast reaches the coast without obstacle, while the visual ray from the person on the deck is intercepted by the bulge of the water. The diagram in the 16th-century Hebrew manuscript is almost the mirror image of that in the Apianus edition with small differences. The shape of the dry land and the buildings are slightly different, and it looks as if some of the towers had a crescent on top. 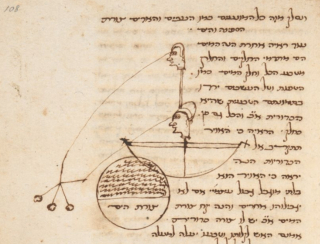 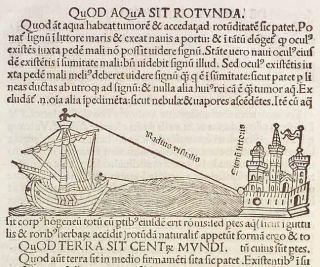 (Right) Printed diagram “That the water is round” from the 1488 Venice edition. (Source: Wolfenbütteler Digitale Bibliothek; CC BY-SA). 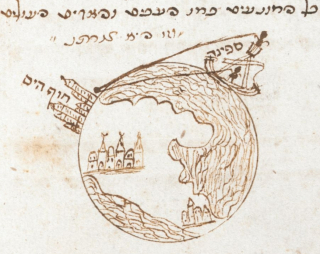 (Left) Printed illustration “That the water is round” from the 1526 Ingolstadt edition (Source: MDZ Digitale Bibliothek; NoC-NC)

The Hebrew copyist borrowed some more of Apianus’ diagrams with slight modifications. At the discussion on why the celestial bodies look larger when rising and setting from when they are in the middle of the sky, there is a compound diagram. Both in Apianus’ edition and in our Hebrew manuscript, the right side of the diagram shows a coin under water: when we look at it through water, the coin will appear larger than it really is (the effect of refraction). The same happens with the heavenly bodies, and this is what the left side of the diagram illustrates: the vapours in the atmosphere create an optical illusion and show the sun and the stars larger than they really are. Notice that while the inscription on coin (“tanova”, that is, moneta nova) in the Latin diagram is curling around a Greek cross, the Hebrew depiction omitted this symbol (probably to avoid any visual reference to Christianity) and has only the inscription (matbea, Hebrew for coin).

(Left) Why the sun and the stars seem to be bigger when rising and setting, from the 1526 Ingolstadt edition (Source: MDZ Digitale Bibliothek; NoC-NC).

Some of the diagrams in our Hebrew manuscripts are based on later Christian editions. The diagram to demonstrate why the sphere of the heavens cannot be flat is practically identical with that in the 1538 Wittenberg edition. It shows a tiny (or giant, in relation to the globe) human figure standing on earth looking up to a flat sky. There are three stars in the sky: one is directly above him, and one on each side. If the sky was flat – the argument goes – then the celestial bodies directly above our head (in case of the sun this would be midday) would be closer and thus would seem bigger than when they appear low in the sky (when rising and setting). We know from experience, that this is not the case. The celestial bodies actually seem bigger when they are rising or setting than when they are directly above us. Consequently, the sphere of heavens cannot be flat. 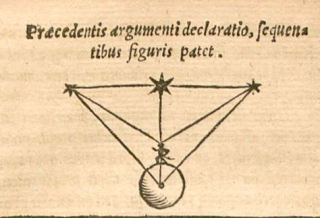 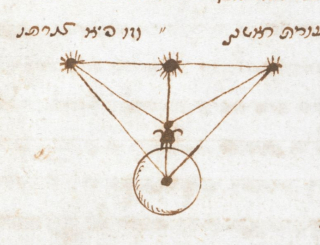 (Left) If the sphere of the heavens was flat, an explanation from the 1538 Wittenberg edition (Source: MDZ Digitale Bibliothek; CC)

There are many more fascinating illustrations in our Hebrew copy, but these few examples are perhaps enough to demonstrate how much these early printed Latin editions of Sacrobosco’s work influenced our copyist. Since the copyist does not tell us when (or where) he produced this manuscript, finding the models of the diagrams can also help in the dating of the manuscript. Based on the origin of these few illustrations, our manuscript must have been copied sometime after 1538. Of course, a more thorough study of the entire illustration program may lead to different results. Whenever it was copied, by then these diagrams had become part of the textual tradition of Sacrobosco’s Sphaera, so much so that our scribe felt the need to include them into his copy.

The Sphere: Knowledge System Evolution and the Shared Scientific Identity of Europe https://sphaera.mpiwg-berlin.mpg.de/

Thorndike, Lynn. The Sphere of Sacrobosco and its commentators. Chicago: University of Chicago Press, 1949.

On Abraham and Solomon Avigdor: