Magic and Divination in Ethiopian Manuscripts 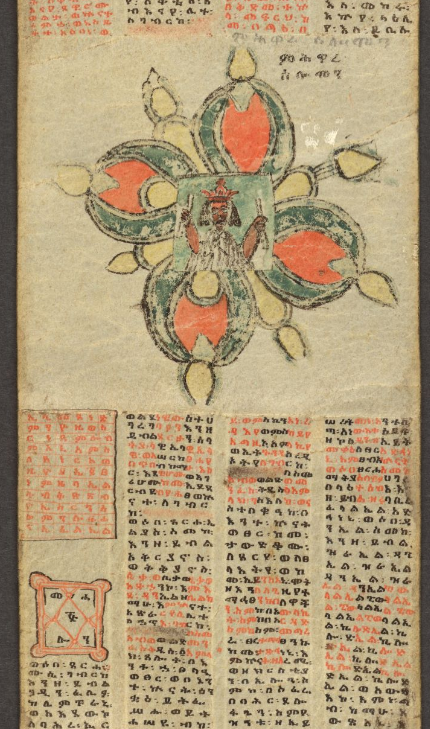 One of the most beautifully illustrated 18th-century amulet scrolls featuring a rider bearing a lance fighting a horned demon armed with a sword. (Or 12859)

With the exception of a few works, magic, medicine, talismans, and divination in Ethiopian manuscripts have received little serious scholarly attention. Research on the subject has so far been mostly restricted to the texts found on manuscripts. The scholarship on Ethiopian magic is very small and not fully investigated; the subject is still in its infancy.

This short illustrated blog will explore some magic and divination in Ethiopian manuscripts and other items, such as amulets from the collection, making use of images from some of the best examples of the manuscripts and amulet scrolls in the British Library’s collections. As well as containing spells, charts, magical squares and numbers, these manuscripts are adorned with rich illustrations. For an introduction to the amulets, see my previous blog post. 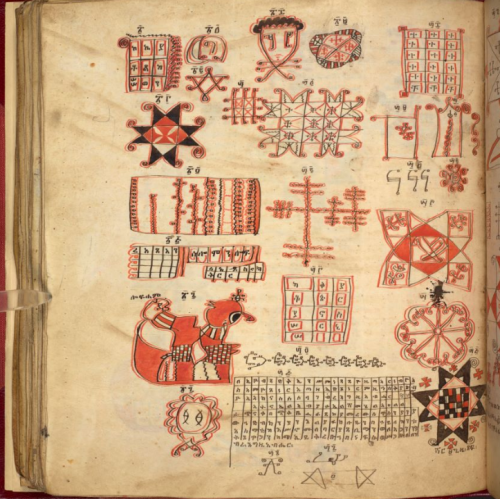 An 18th-century practitioner’s handbook. This manuscript is decorated with over 200 illustrations of magical pictures, squares and lines of magical and talismans. (Or 11390, f. 47v)

The English term "magic" is a cultural construct rooted in Western thought and in a particular ethnocentric history, more specifically in the complex of Greco-Roman culture overlaid with Judaeo-Christian theology. Thus, the late 19th-century Western approach to the study of magic was, to a large extent, shaped by its inheritance. Consequently, the term "magic" has been problematized, and has become the focus of endless scholarly debate leading to a situation in which both its definition and its relation to religion has become contingent upon the interest and research area of each particular scholar. Nevertheless, there is a fair amount of agreement that one of the main characteristics of magic can broadly be described as having an immediate goal, while the purpose and function of religion is long term. 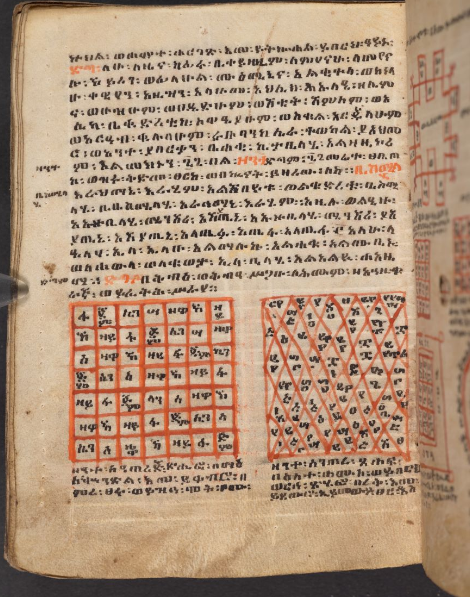 While most divination treatises are usually just texts, this example has an elaborate drawing of charts and magic square. (Or 12034, f.64v)

There are many factors distinguishing the Ethiopian tradition of magic from its Near-Eastern counterpart. One aspect is the strong connection between the divination and amulet scrolls. Only the Ethiopian tradition has a firm, established, and attested connection between the amulet writers and the Church; this is not found in either Near-Eastern Christianity or Judaism.

We must therefore be cautious when discussing "magic" in general outside of its cultural construct in Western scholarship, since the difference of terms changes their meanings from culture to culture. In order for us to understand Ethiopian magic and what constitutes it, it needs to be contextualized by its historical and cultural heritage and characterized in reference to a variety of areas of study. 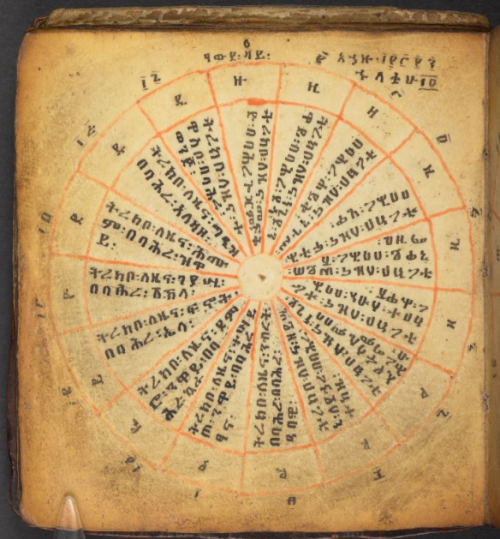 Ethiopian magic and divination books are a striking and very distinctive form of Ethiopian material culture. Part of a rich magical literature of incantation, these manuscripts are also adorned with a variety of illustrations that were created for spiritual edification and for protection from real or imagined harm. While Christian icons were intended to promote spiritual growth, Ethiopian magical art consists of visual representations of the world of demons and the supernatural, making the invisible visible for all believers.

An 18th-century amulet scroll composed of three strips of parchment measuring 1570 X 70 mm. It features an incantation against various diseases, accompanied with talisman and magical characters. (Or 5424)

The British Library's collection of magic, divination, and magico-medical writing that fits into this group of manuscripts numbers over 40, making it the largest in the UK. The Wellcome Trust possesses 16 manuscripts, and the Cambridge University Library holds 14 manuscripts.

Posted by Michael Erdman at 1:00 PM