The Tree of Knowledge: magic spells from a Jewish potion book

One of the items in our postponed exhibition Hebrew Manuscripts: Journeys of the Written Word is a tiny little codex from sixteenth-century Italy. It is entitled The Tree of Knowledge (Ets ha-Da’at) and contains a collection of some 125 magic spells for all sorts of purposes: curses, healing potions, love charms, amulets. There are a good number of such magical-medical manuscripts in the Hebrew collection, but this volume is special for at least two reasons. First, because of its neat layout and accuracy in its execution. Secondly, because it has an introduction in which Elisha the author tells the story of how he collected these spells. 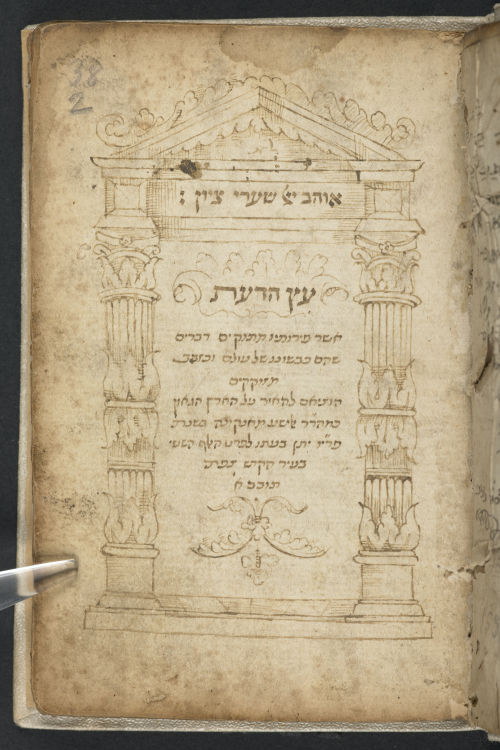 According to his introduction, Elisha is overcome with a great thirst for knowledge, and he starts on a journey to satisfy it. He is wandering from town to town until he arrives in Venice, the great city full of wise and knowledgeable sages. There, thanks to God’s mercy, he wins the trust of Rabbi Judah Alkabets, and gains access to the rabbi’s library. He soon discovers that the Rabbi’s collection contains precious kabbalistic volumes “that emerged for fame and praise, and all written with the finger [of God – Ex. 31:18].” So he swears in his heart that he will not leave the library until he has collected all its secrets. As he is looking through the books, he notices “a book hidden and sealed, in a chest within another chest covered with a cloth and sealed.” When he opens this hidden book, he finds in it all sorts of magic spells, and decides to copy them. After the death of Judah Alkabetz, Elisha leaves Venice and continues his journey, and eventually arrives in Safed, in the Land of Israel. He spends there a long time before he gains the trust of the sages of Safed, but at the end they share with him their secret wisdom. His book, which he calls the Tree of Knowledge, is based on the secrets he acquired in Venice and in Safed.

After relating his painstaking efforts to obtain such precious hidden knowledge, Elisha explains the way he organized the collected material and structured his book. He provides a table of contents for the users to facilitate their access to the spells they are looking for. The table of contents is divided into four sections:

1. Spells that use divine names;

2. Spells that use names of the “Spirit of Impurity” and those of the “Other Side” (that is, references to evil powers);

3. Medicines based on nature and experiment;

So what kind of secret knowledge did Elisha ben Gad acquire in Venice and Safed? Let’s see a couple of spells from each section. Oh, it is so difficult to choose! 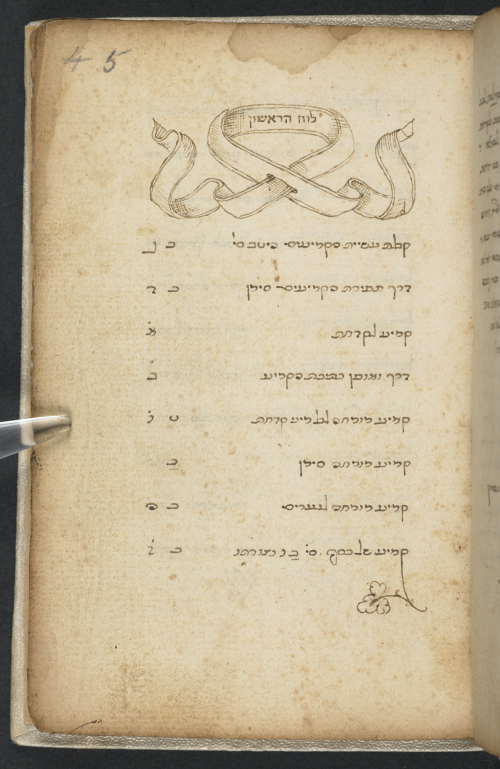 Among the 52 spells using divine names contained in the first section, there are many amulets providing protection against illnesses like nose bleed, fever, and ear ache; spells for the enhancing intellectual capabilities such as facilitating learning, understanding, or improving memory; and various other spells. 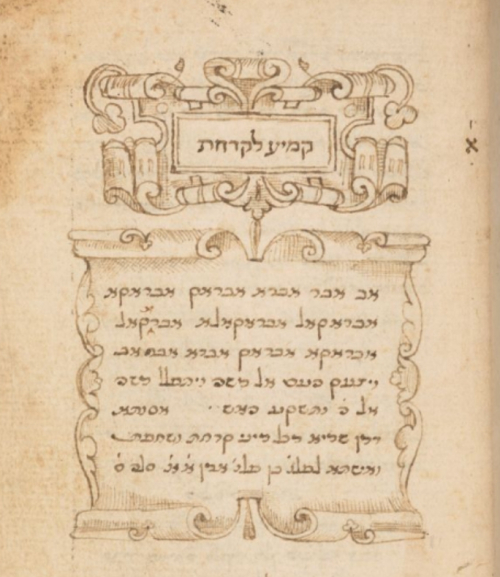 The very first entry is an amulet against fever:

Av avr avra avrak avraka avrakal avrakala avrakal avraka avrak avra avr av – “The people cried out to Moses. Moses prayed to the LORD, and the fire died down.” (Num. 11:2). Cure from heavens for all sorts of fever and consumption and fire for such and such [here to put the name of the specific person]. Amen a[men] a[men] selah.

It is easy to discover the well-known magic word “abracadabra” in this spell. It appears first in a second-century Latin medical poem by the physician Quintus Serenus Sammonicus. The origin of this word is not clear. It may come from Aramaic avra ke-davra, meaning “I create as I speak”, but there are several other theories around. 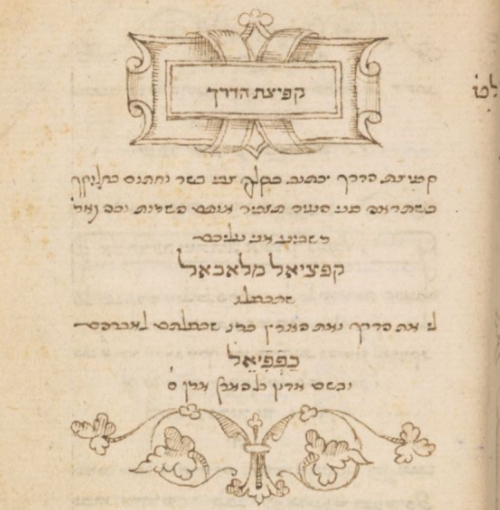 Spell no. 39 is for shortening a long road, and goes like this:

Shortening the road: write on a piece of kosher parchment made of deer and sew it into your robe. When you see the countenance of the town, mention these names and say this: “I adjure you, Kaptsiel, Malakhel, shorten for me the road and the country as you shortened them for Abraham. Cafefiel – and in the name of the Lord of the whole earth. Amen S[ela]” 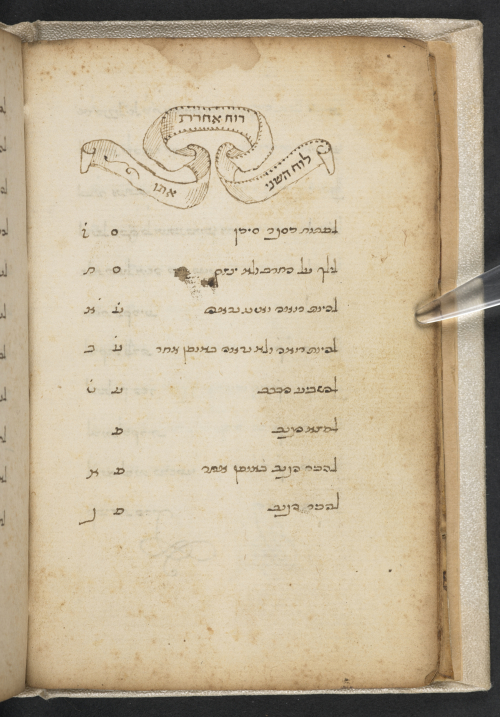 The second section is supposed to contain spells that use the names of evil spirits “the spirit of Impurity and the Other Side”, as Elisha puts it. To be honest, I did not always find such names in the charms of this section, though it may just be due to my limited knowledge and experience of the Other Side. Still, the section contains many useful spells – 19 altogether –, among others some that make you invisible, help you find scorpions and snakes, make you “snake-proof” or “sword-proof”, and quite a few that help you catch thieves. Here is an example of the latter (no. 80):

To find the thief write on a piece of kosher parchment these names [see words at the end of the spell], and hang them around the neck of a black rooster. Then circle around the suspects with the rooster, and it will jump on the head of the thief. And this has been tested. 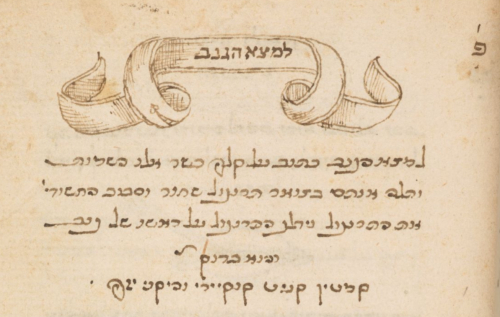 While I was not able to identify these magical words at all – could some of them be names of evil spirits? – I had better luck with spell no. 97 for burns by fire:

A wonderful incantation, tried and tested many times. For small and big burns. With these words complete recovery without pain! Say these names [i.e. the incantation] seven times:

And then blow on the burn with the breath of your mouth and repeat again the incantation seven more times, and the fire will not damage him.

As you can see, the actual incantation addressing Fire itself is in Judeo-Italian, that is, Italian written in Hebrew characters, and it reads something like this:

"Agrifuk agrifar agripyri whom did you want to hurt with fire? You were generated from an acarus [probably from Greek akarḗs, meaning “tiny”), you were brought forth from such a source, [and] you were thrown into the water. You cannot do any more harm...!"[1] 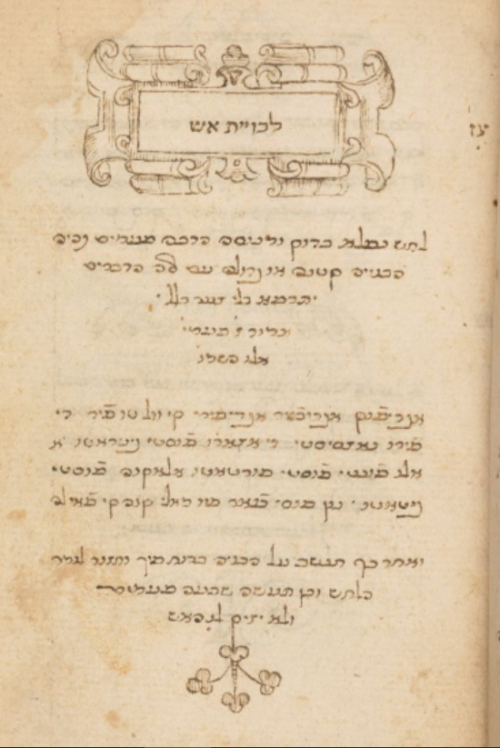 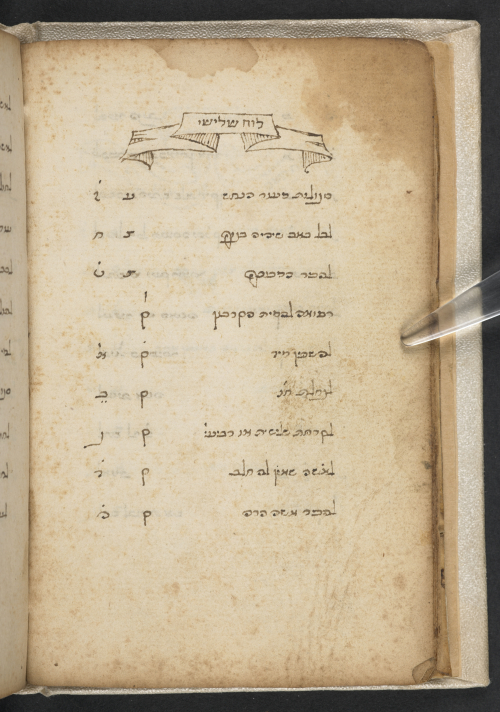 Elisha tells us that in the third section of his work we can find “remedies based on nature and experiment”. Among these 31 remedies, there are a few for fevers, suffering from worms, cancelling witchcraft, complications related to pregnancy and childbirth, and so on. He also discusses the magical properties of snake skin. It seems, however, that quite a few of the remedies listed here are not based on nature but use some sort of incantation or magic words instead. 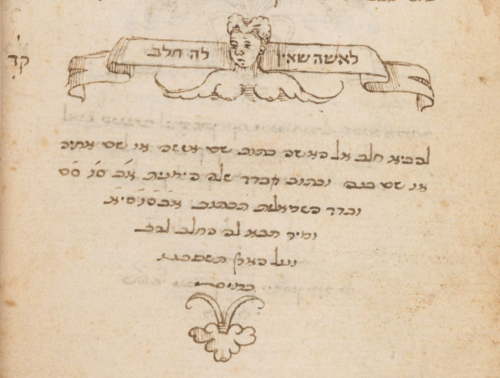 Remedy no. 104 is a good example of the latter. It is a spell for a woman who does not have milk. The title of the spell is inscribed in a ribbon and it is illustrated with the bust of a naked woman.

To bring milk to the woman write the name of the woman or her brother or her son [on a piece of parchment?], and write on the woman’s right breast: AV SU SAS, and on her left breast write: AV HU SIA, and she will immediately have milk in abundance, and it will spill onto the ground as water. 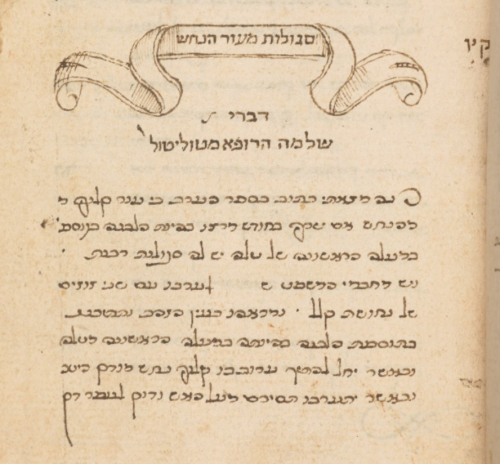 Entry 116 is about the magical qualities of snakeskin, and according to the title, this spell is based on “the words of Solomon the physician of Tulitul” (Tulitula is the Arabic name of Toledo). Elisha says that he read in an Arabic book that if you burn the skin of a snake during a certain period in March, you can use the ashes of the skin for all sorts of purposes. Then he lists the 12 magical qualities of snakeskin based on important Arabic magic spell books (number 12 is missing). Here are some of the best ones: 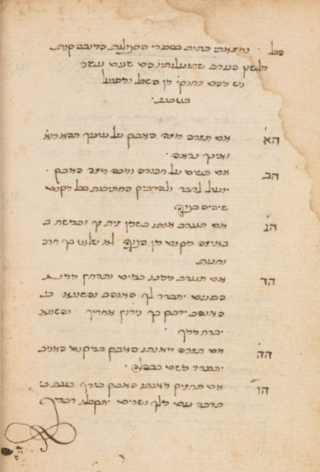 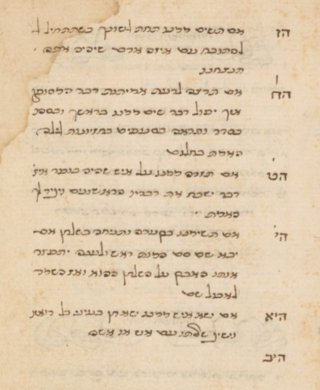 No. 1 If you sprinkle some of the dust into your eyes, you will see but you will not be seen (invisibility!);

No. 6. If you hold some of the dust in your hand when you appear before a king or princes, and they will heed your words;

No. 10. If you put some of the dust into a plate and leave it on the table, if the elixir of death, or “poison weed and wormwood” [Deut. 29:17] gets there, the dust will scatter on the table and [then you would know to] avoid eating there. 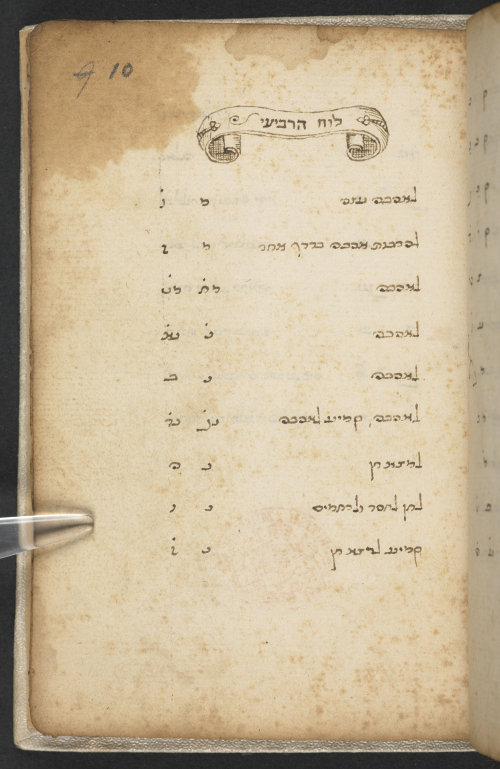 Section four is the shortest with its 17 items. It has several love spells and potions, spells to make a positive impression on rulers, on how to gain someone’s trust, and how to defeat your opponents. No. 58 is a spell that helps you to make a reluctant person answer your questions:

If you ask a question and they do not give you a reply, wash your hands in fresh water, and then write on your palm these words and characters. Then put your palm on the palm of the fellow, and ask your question. And this is what you have to write:

Here you can see a drawing of a palm with a same word written three times, and two characters from a cryptic alphabet. Two ribbons coming out from behind the palm. The inscription in the upper one contains further instructions:

Write this with a new pen.

The ribbon at the base of the hand contains the title of the next entry: no. 59, a spell about how to win a court case:

It is tried and tested many times. How to defeat your opponent in court even if he is a king. Take the tongue of a hoopoe and hang it on your right side close to the heart at the time when you go to speak with him. 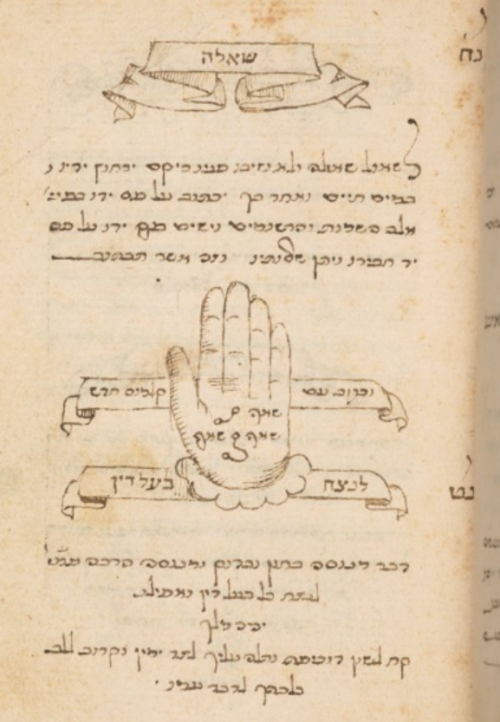 You can certainly see even from this small selection of spells how valuable the Tree of Knowledge is! Elisha’s long journey from Italy to Galilee through the Mediterranean, his painstaking efforts to acquire hidden and ancient knowledge, were not in vain. And you, dear reader, are only one click away from all this treasure!

Disclaimer: We do not take responsibility for the endurance of these spells. Even strong magic can lose or modify its power over the centuries! Please, do not blame us if you turn into a frog. Try these spells only at your own risk.

[1] Thank you to Giulia Baronti for helping me with the translation!