When you wish upon a star: The Celestial Weaver Maiden at the Star Festival

The Star Festival 七夕, the night when many of us in Eastern Asia wish upon a star and celebrate romance, is on the 7th day of the 7th lunar month, and this year it falls on the 25th of August 2020. As we have mentioned in previous blog posts, this annual summer event has been a tradition since time immemorial. This year, we are focussing on a simple question: why do Japanese call the Star Festival 七夕 Tanabata? In China, it has been known as Qixi (qi = 七 and xi=夕), literally meaning seven evenings or the seventh evening. If Japanese followed the Chinese convention, it would become Shichiseki (shichi = 七 and seki=夕). But the Japanese have written the Star Festival as 七夕, and read it as Tanabata in this unusual way for a long time. We may see reasons for this in a key motif of the Star Festival - the weaver maidens who are called Tanabata or Tanabatatsume. 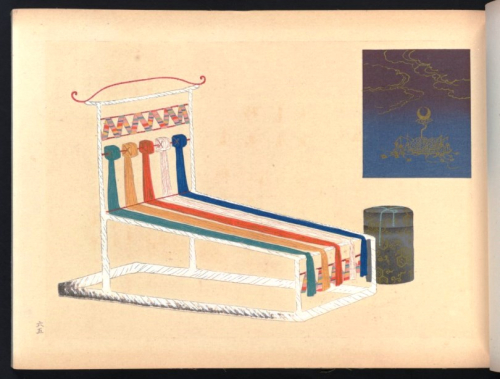 The Star lovers’ story originated in China and deals with the weaver girl and the cowherd boy, a couple who are separated by the Milky Way in the night sky. They can only see each other once a year by crossing the magpie bridge. The weaver girl’s name is written 織女 Shokujo or 織姫 Orihime both meaning ‘the weaver maiden’, and is a traditional name in modern popular Japanese culture. However, it is likely that ancient Japanese people, who were directly influenced by the arrival of Chinese fairy tales, might have not read 織女 as Shokujo as we currently do, but as Tanabata or Tanabatatsume.

This unique Japanese reading of the name of the weaver maiden appears in The Tales of Ise (伊勢物語, Ise monogatari), a very famous work of Japanese literature which is thought to have been written and collected together sometime during the Heian period (794-1185 CE). The hero of the tale is never clearly named, but all readers assume it is Ariwara no Narihira (在原業平 825-880 CE). In the real world, he was a grandson of one of previous emperors but not a member of the imperial family. He was a notable Heian courtier and left his name as a great waka poet.

Prince Koretaka, Ariwara no Narihira and other hunting members resting at the river bank of Amano. (Chapter 82 of The Tale of the Ise (伊勢物語圖會, Ise monogatari zue), Naraehon manuscript, mid-16th century, Or 904, f.98r)

In Chapter 82 of the Tale of Ise, Prince Koretaka and his followers, including Narihira, are out enjoying a day's hunting. The group come to the river bank of Amano (天野) and decide to have refreshments after their hunt. Prince Koretaka orders Narihira to compose a fitting waka for this occasion.

Let us rest from this day’s hunt and pass the night with the Weaver maiden
as we have come to the fields of the Celestial River. 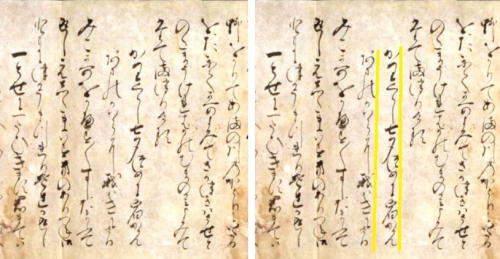 Above left is the page featuring the Tanabata waka composed by Narihira, which starts by the vertical yellow lines on the right-hand image. (Chapter 82 of The Tale of the Ise (伊勢物語圖會, Ise monogatari zue), Naraehon manuscript, mid-16th century, Or 904, f.97r)

This waka poem contains references to the motif of the star lovers. They come to the bank of the Amano River – in Japanese, it is pronounced Amanogawa (天野川), the same as the Milky Way (天の川) in Japanese. Narihira elegantly composes his waka as if they were approaching the bank of the Milky Way in the night sky, so naturally, there should also be Tanabatatsume, who is the Heavenly Weaver maiden. Interestingly, Tanabata (七夕 the seventh evening) in this waka indicates the Heavenly Weaver maiden in person. Also, his waka shows us that by the zenith of Heian court culture, the Star Lovers had already been popular among the Japanese.

The oldest anthology of Japanese waka poetry books, the Man’yōshū ( 万葉集 literally the Collection of Ten Thousand Leaves) is estimated to be have been compiled towards the end of the Nara period (710-794 CE), at a time when the court and capital was situated in Nara. Donald Keen (1922-2019), who was one of the most remarkable Japanese scholars in modern times, counted the number of the Seventh Night poems, which number more than 120 in the Man’yōshū. He commented that it was about this time that the Chinese legend was absorbed into Japanese folklore, and the number of related waka in Man’yōshū helped us to judge how deeply this romantic story was widely cherished by the Japanese people.

為我登織女之其屋戸尓織白布織弖兼鴨
The waka in the Man’yōshū are notoriously difficult to interpret but basically in Waka 2027 , someone (typically a man or noble) is wondering aloud to himself when his lover will finish the garment which she has been weaving for their next meeting.

In this waka, the Heavenly Weaver maiden is written as 織女, as we do in the 21st century, but it is pronounced as Tanabatatsume, not Shokujo.

棚機之五百機立而織布之秋去衣孰取見
The Heavenly Weaver maiden is working on many looms – who shall look upon and receive the cloth she is making?

Interestingly, in this waka, the Heavenly Weaver maiden is written as 棚機, and the script matches the pronunciation ‘Tanabata’. Even though there is no explicit mention of the 7th day of the 7th lunar month and she is one of the star lovers in the lines, both waka undoubtedly refer to the love of the celestial couple.

It's possible that 棚機 could represent the advanced loom brought into Japan by oversea weavers. A Noh play, ‘Kureha (呉服)’, inspired by a legend of skilled artisan weavers who were invited to Japan to train the Japanese. Among them, were two foreign sisters Kurehatori 呉服織 and Ayahatori 漢服織. They wove for the Emperor Ōjin 応神 who considered to have reigned in the late 3rd century CE. 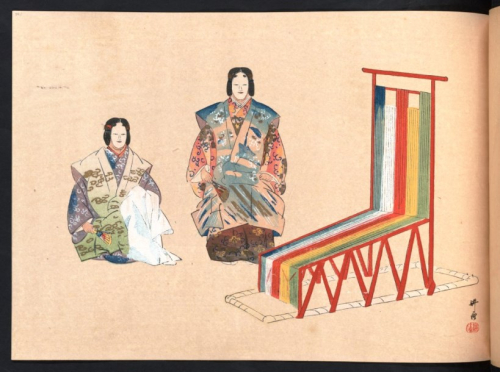 We can find possibly the oldest Tanabatatsume motif in the Chronicles of Japan (日本書紀 Nihon Shoki), completed in 720 CE. The earlier chapters of Nihon Shoki describe a Shintō myth of how the land of Japanese islands are created by Shintō gods and goddesses and their activities as deities in their land, the Upper Heaven.

In the chapter which deals with the reign of Ashihara no Nakatsukuni 葦原中国, which literally means ‘The middle country of reed beds’ and which represents the physical land of Japan, the name of a sister of a god is known as Tanabata 多奈婆多 who is the Heavenly Weaver maiden in the Upper Heaven. 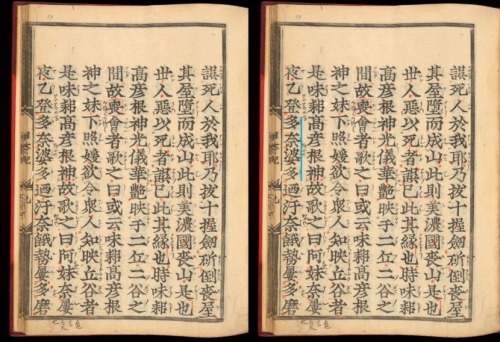 Above left is the page showing a part of the waka dealing with Tanabata, 多奈婆多indicated by a vertical blue line on the right-hand image. (Prince Toneri 舎人親王(676-735) [editor], Chronicles of Japan. Chapters on the Age of Kami (日本書紀神代巻, Nihon shoki. Jindai no maki), Movable type print edition published by command of Emperor Go-Yōzei 後陽成天皇 (慶長勅版, Keichō chokuhan), 1599, Or.59.bb.5, f 057r)

Weaving cloth dedicated for Shintō deities have been treated as an important activity since the very early legends of the Upper Heaven. There is an earlier famous episode in the Upper Heaven, in which the Sun Goddess, Amaterasu, hides herself in the Heavenly Rock cave (Ama no iwado 天の岩戸) so that the all of the worlds lose her rays of light. She is extremely upset by her brother who has disturbed her or her weaver maiden. He throws a dead horse into the special workshop where the ladies are weaving. His action not only destroys the building but also injures the ladies and stains their clothes. Amaterasu rages at her brother and goes into the cave to hide herself. 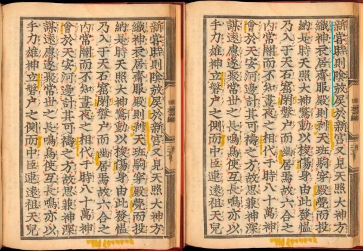 Above left is the page showing the episode of ladies weaving in the special workshop. The keywords ‘weaving for gods at the special holy workshop’ (織神衣居斎服殿) is indicated by a blue line on the right-hand image. (Prince Toneri 舎人親王(676-735) [editor], Chronicles of Japan. Chapters on the Age of Kami (日本書紀神代巻, Nihon shoki. Jindai no maki), Movable type print edition published by command of Emperor Go-Yōzei 後陽成天皇 (慶長勅版, Keichō chokuhan), 1599, Or.59.bb.5, f 031v)

The legend of the heavenly weaver maidens has passed their ancient name as Tanabata down through the ages to the Star Festival. This occurred long after the Star Lover’s story became very popular and their romance was celebrated annually on the 7th day of 7th lunar month. In this way, their curious legacy remains just barely visible beneath the surface of later traditions.

Keene, Donald, The Manyoshu : The Nippon Gakujutsu Shinkokai Translation of One Thousand Poems, with the Texts in Romaji . Records of Civilization, Sources and Studies ; 70. (New York: Columbia University Press, 1965). (Ac.2688/45.(70.))

With special thanks to Mr Stephen Cullis, Lecturer at Nagasaki University of Foreign Studies, for providing the summarised interpretations of the waka in the Ise Monogatari and the Man’yōshū.