In my previous article on Birds in Thai manuscript illustration I described depictions of natural birds in Thai Buddhist manuscripts. Images of birds can be found in scenes from the last ten Birth Tales of the Buddha, but also in illustrations of the mythical Himavanta forest at the foot of the mythical Mount Meru according to Buddhist cosmology. Such illustrations are used to accompany extracts from the Pali canon (Tipiṭaka), specifically text passages from the Seven Books of the Abhidhamma Pitaka contained in funeral or commemoration volumes. 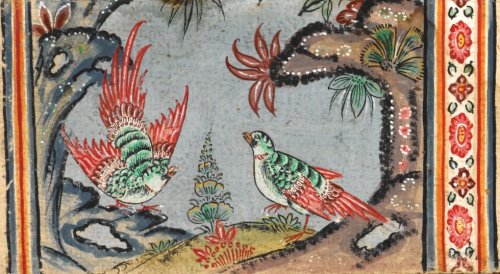 Detail from a painting depicting a natural scene with a pair of unidentified birds in a Thai folding book containing the Mahābuddhagunā and extracts from the Tipiṭaka. Central Thailand, 18th century (British Library, Or 14068 f.52)

Many birds depicted in manuscript illustrations however cannot be identified as real birds. Some of them may represent real birds that the painter never had seen in nature and only knew from descriptions. From early European depictions of life in Thailand dating back to the time before the invention of photography, for example, we know that it is very difficult, if not impossible, for an artist to create a realistic impression of something from just a verbal description. 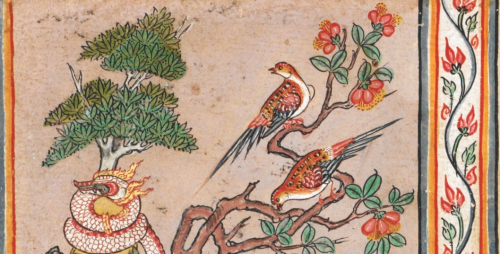 Scene from the Bhuridatta Jātaka depicting the serpent Bhuridatta coiled around an ant hill next to a pair of birds which could represent Red-headed Trogons (Harpactes erythrocephalus, นกขุนแผนหัวแดง). Central Thailand, 18th century (British Library, Or 14068 f.7)

The birds in the illustration above from the Bhuridatta Jātaka - a Birth Tale in which the Buddha in a previous life was a serpent (nāga) who followed the Buddhist precepts - have a mainly red coloured head and body with a white chest, black wings and long, black tail feathers. The description, to some extent, matches that of the Red-headed Trogon (Harpactes erythrocephalus, นกขุนแผนหัวแดง). This bird, described by John Gould in 1834, is found in all countries of Southeast Asia as well as Bangladesh, Bhutan and Nepal. It has variations in coloration throughout its range, but always follows the same general color scheme: the male has a dark red head and belly, a white patch on the chest, a brown back, and barred black-and-white wings. The female has a more faded-red belly and a brown head. This is a typically stationary bird and difficult to see, and often one can only hear its high-pitched gulping hoots.

Some of the bird illustrations in this manuscript are particularly colourful, which makes it even more difficult to establish whether they are real or imagined birds. One example is found in an illustration of the Himavanta forest accompanying text passages of the Mahābuddhagunā: two birds are depicted with long slender necks and pointed tails in yellow, brown, red, green, blue and white colours. Remarkable are the long red bills with red crests. Judging from their shape these birds are clearly ducks and the colours match to some extent those of the male Mandarin Duck, although in nature these ducks do not have long slender necks. In this case the painter may again have worked from a verbal description without seeing a Mandarin Duck in nature. However, it is possible that the painting had been inspired by Chinese representations of Mandarin Ducks on porcelain or textiles.

The Mandarin Duck (Aix galericulata, เป็ดแมนดาริน), described by Carolus Linnaeus in 1758, is a medium-sized perching duck originally found in East Asia, but nowadays with large populations in Europe and North America as well. The appearance of the adult male is striking: it has a red bill, a large white crescent above the eye and a reddish face. The breast is purple with two vertical white bars, and the flanks ruddy, with two orange tips at the back. The female is of a mainly brownish colour with some white. Both the males and females have crests, but the crest is more pronounced on the male. In Chinese culture Mandarin Ducks are regarded as a symbol of conjugal affection and fidelity, and are frequently featured in Chinese art.

Detail of an illustration of the Himavanta forest with a pair of birds which may represent Mrs. Hume's Pheasants (Syrmaticus humiae, ไก่ฟ้าหางลายขวาง). Central Thailand, 18th century (British Library, Or.14068 f.33)

One last example of outstanding painting quality in this manuscript is a pair of colourful birds appearing in another illustration of a scene in the Himavanta forest, in which the birds are placed above a pair of mythical lions (Rajasiha, ราชสีห์). These bird illustrations stand out for the detail of the long and pointy wing and tail feathers in red, brown and green colours. The chest is white and the upper part is dominated by red and orange tones with darker spots on the back. The colour of the head, or crest, matches the green in the wings and tail. The long, pointed wing and tail feathers may be a hint that the painter tried to depict Mrs. Hume's Pheasants (Syrmaticus humiae, ไก่ฟ้าหางลายขวาง) , a species of a rare pheasant found throughout forested habitats in southwestern China, northeastern India, Burma and Thailand. Allan O. Hume described the bird in 1881 as a large, bar-tailed forest pheasant with a greyish brown head, bare red facial skin, chestnut brown plumage, yellowish bill, brownish orange iris, white wingbars and metallic blue neck feathers. The male has a long greyish white, barred black and brown tail whereas the female is a chestnut brown bird with whitish throat, buff color belly and white-tipped tail.

It is quite remarkable that the painter of this manuscript tried to include some real birds in the illustrations which depict scenes from the last ten Birth Tales of the Buddha and of the Himavanta forest. Although these birds are purely decorative elements, they give viewers some sense of reality and connection with their own lives. They also show that there was good knowledge of certain species of birds, whereas others may have been rarely seen and painters had to work with verbal descriptions of very rare birds.

McDaniel, Justin: "The Bird in the Corner of the Painting: Some Problems with the Use of Buddhist Texts to Study Buddhist Ornamental Art in Thailand." Moussons 23, 2014, pp. 21-53