In my previous article on The Buddha and his natural environment in Thai manuscript art I discussed artistic depictions of the natural environment in which the historical Buddha is placed, highlighting the close relationship he had with the natural world and all sentient beings. Besides trees, flowers, rocks and water one can almost always find representations of animals in Thai Buddhist manuscript illustrations. Sometimes these are related to the text or to references within the text to certain Buddhist scriptures, for example depictions of elephants, horses, wild cats and deer in the context of the Buddha's Birth Tales (Jātaka). But very often depictions of animals like rabbits, squirrels, fish, lobsters and birds have no connection with the text at all - they are added as decorative elements to highlight the beauty of the natural world that humans often are unable to appreciate in their busy daily lives. 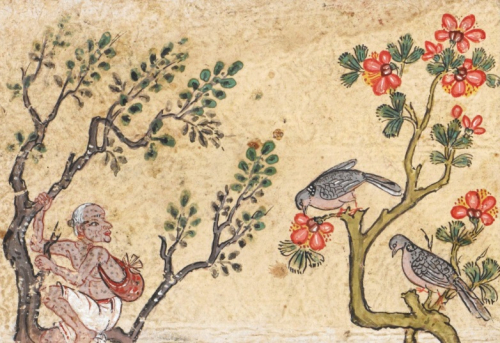 Although there are Thai animal treatises specially dedicated to the study of certain animals, like elephants or cats, in Thai Buddhist manuscript illustration the most frequently appearing animals are birds. Judging from the paintings, the purpose of adding images of birds is to enhance the serenity and auspiciousness of a scene. Often representations of birds can be found in scenes from the last ten Birth Tales of the Buddha, but also in illustrations of the mythical Himavanta forest at the foot of Mount Meru according to Buddhist cosmology. Such illustrations are used to accompany extracts from the Pali canon (Tipiṭaka), specifically text passages from the Seven Books of the Abhidhamma Pitaka that can be found in funeral or commemoration volumes.

As regards the depiction of birds, one manuscript in the Library's Thai collections stands out: Or.14068, an eighteenth-century folding book (samut khoi) with 53 folios containing a collection of Pali Buddhist texts in Khmer script, including the Pārājika (Four Disrobing Offences), the Brahmajālasutta (the first of the Buddha's Long Discourses), passages from the Seven Books of the Abhidhamma Piṭaka, Sahassanaya (a text on meditation), and as the main text the Mahābuddhagunā (the Great Perfections of the Buddha). Added to the texts are thirteen paired illustrations showing scenes from the last ten Birth Tales and the Himavanta forest, and one illustration of the Buddha in the earth-touching gesture (bhumisparsha mudra). 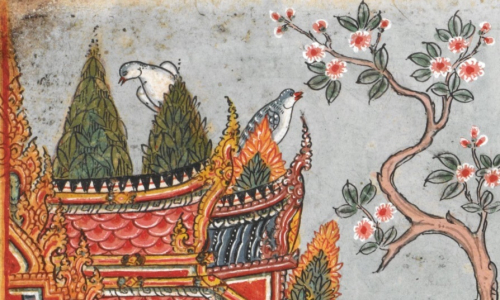 Looking at the illustrations, some of which depict real animals such as deer and squirrels, whereas others show mythical animals such as the King of Lions (Rajasiha, ราชสีห์) and serpents (nāga, นาค), I was wondering if the birds in the paintings could be identified as real birds or if they were mythical birds, or simply the results of artistic imagination.

The illustration above shows a detail from a scene in the Nārada Jātaka which tells of a king who indulges in worldly pleasures instead of following the Buddhist precepts until his devoted daughter asks the Great Brahma God Nārada, a former incarnation of the Buddha, for help. Seen on the trees behind the roof of the king's palace are two birds which could be artistic representations of Mountain Imperial Pigeons (Ducula badia, นกมูม), described by Thomas Stamford Raffles in 1822. This bird in the pigeon and dove family, common across Southeast Asia, is the largest pigeon species with a fairly long tail and broad, rounded wings. The head, neck and underparts are vinous-grey with a contrasting white throat and greyish-brown or dull maroon upperparts and wings. Its natural habitats are subtropical or tropical moist lowland and mountain forests of up to 2500 m height. 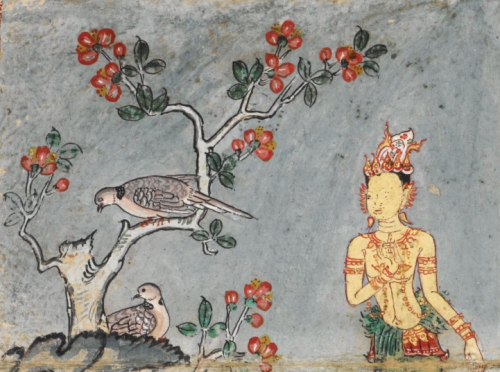 A pair of Spotted Doves (Spilopelia chinensis, นกเขาใหญ่) in an illustration from the Temiya Jātaka, here seen next to Prince Temiya. Central Thailand, 18th century (British Library, Or 14068 f.1)

Another bird in the pigeon and dove family that appears several times in this manuscript can be safely identified as the Spotted Dove (Spilopelia chinensis, นกเขาใหญ่). The illustration above is part of a scene in the Temiya Jātaka which tells of the young Prince Temiya, a former incarnation of the Buddha, who did not wish to become king and pretended to be mute. When a charioteer was commanded to bury the prince alive, he revealed the truth to the charioteer who set him free. Temiya then became an ascetic and followed the Buddhist precepts. The pair of Spotted Doves, one resting on a rock, the other on a tree branch next to Prince Temiya, play no role whatsoever in the story and clearly were only added for decorative purposes in this illustration.

The Spotted Dove, described by Giovanni Antonio Scopoli in 1768, is a small and relatively long-tailed pigeon with a heavily spotted neck patch and scaly-patterned upperparts. It is a common open-country pigeon on the Indian Subcontinent and in Southeast Asia. This bird is found across a range of habitats including woodland, scrub, farmland and human habitation.

A bird that appears very similar to the Spotted Dove in these manuscript illustrations is shown in the picture below. However, instead of the spotted neck patch it has a red collar which suggests that this is may be an artist's interpretation of a Burmese Collared Dove although the collar in the natural bird is black.

In this illustration belonging to a scene from the Suvannasāma Jātaka, a pair of what may be Burmese Collared Doves (Streptopelia decaocto xanthocycla, นกเขาแขก) are sitting on tree branches behind the roof of a forest hermitage. In this hermitage live the blind parents of Suvannasāma, a previous incarnation of the Buddha, who with great devotion cares for his parents. One day he is shot by a hunter with a poisined arrow, but thanks to Suvannasāma's accumulated merit and the pleadings of his parents he comes back to life and recovers fully.

The Burmese Collared Dove, described by Oliver M. G. Newman in 1906, is a sub-species of the Eurasian Collared Dove (Streptopelia decaocto decaocto, นกเขาแขก). This medium sized bird is grey-buff to pinkish-grey overall, a little darker above than below, with a black half-collar across the base of its hindneck. Its habitat stretches from central Myanmar across the Shan State and Yunnan to eastern China. The bird's habitat may explain why the doves in this manuscript from central Thailand were painted with red collars: the painter may only have known them from hear-say, but never seen them in nature. 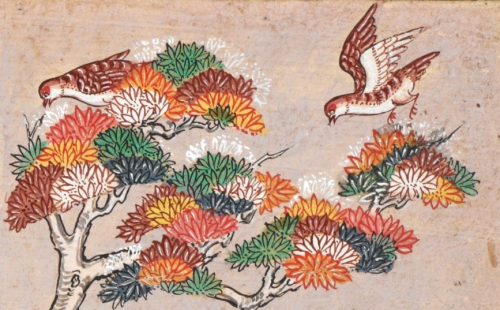 Related to the same story in this manuscript, the Suvannasāma Jātaka, is a second illustration depicting Suvannasāma with an arrow in his chest, lying on the ground next to a tree with colourful leaves. On the tree one can see a pair of birds (shown above) which may represent Red Turtle Doves (Streptopelia tranquebarica, นกเขาไฟ). The Red Turtle Dove, described by Johann Hermann in 1804, is in its appearance quite similar to the Burmese Collared Dove. It is also known as Red Collared Dove. The smaller size and reddish plummage differentiate this species from its relatives. It has a narrow black collar at the base of the hindneck and plain reddish (male) to dull brown upperparts (female). This dove is essentially a plains species with its habitat extending from the Indian Sub-continent across mainland Southeast Asia to Taiwan and the Philippines. 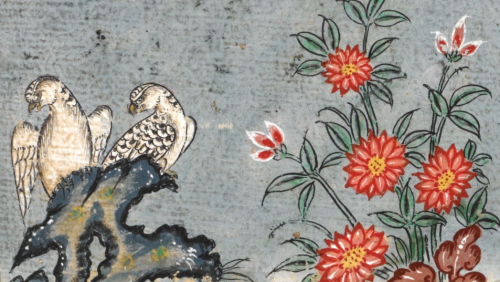 An illustration of a natural scene with artistic interpretation of a pair of Ospreys (Pandion haliaetus, เหยี่ยวออสเปร). Central Thailand, 18th century (British Library, Or 14968 f.52)

A rather unusual bird to be depicted in a Thai manuscript can be seen in the illustration above which accompanies the last text passage of the Mahābuddhagunā (Great Perfections of the Buddha). This may be an artistic interpretation of a pair of Ospreys, set in a rocky landscape, although the colours do not exactly match those of the natural bird. This is a detail of two illustrations on the same folio which also depict other unidentified birds and small mammals.

The Osprey (Pandion haliaetus, เหยี่ยวออสเปร), described by Carolus Linnaeus in 1758, is a fish-eating bird of prey. The upperparts of this larger bird are glossy brown, while the breast is white and sometimes streaked with brown, and the underparts are pure white. The head is white with a darker mask across the eyes, reaching to the sides of the neck. The Osprey has a worldwide distribution and is found in temperate and tropical regions of all continents except Antarctica. During winters it visits all parts of South Asia and Southeast Asia from Myanmar through to Vietnam and southern China, Indonesia, Malaysia and the Philippines.

In my next post I'll write about some of the unidentified birds illustrated in Thai manuscript art.

McDaniel, Justin: "The Bird in the Corner of the Painting: Some Problems with the Use of Buddhist Texts to Study Buddhist Ornamental Art in Thailand." Moussons 23, 2014, pp. 21-53.

Posted by Ursula Sims-Williams at 1:07 AM