Unsōdō and the evolution of design book publishing in Japan

The Japanese Collection of the British Library includes around 50 Japanese pattern and design books.  Thanks to a grant from the Great Britain Sasakawa Foundation, the Library is digitising many of these and making them available online.  This series of blog posts features some of the items in the collection, the artists who created them and the publishers who produced them.  In this post Teruko Hayamitsu, Curator at the fine art publisher Unsōdō, explains the company’s origins and its significance in the development of Japanese design.

Unsōdō is a Japanese publishing company, specialising in art books, which was founded in Kyoto in 1891 and is still in operation today.  Established in the late Meiji Period (1868-1912) when Japan was rapidly modernising, Unsōdō sought through its publication of art books to educate Japanese society on design in the new age, and to highlight the direction of art publishing and the modernisation of the textile industry. 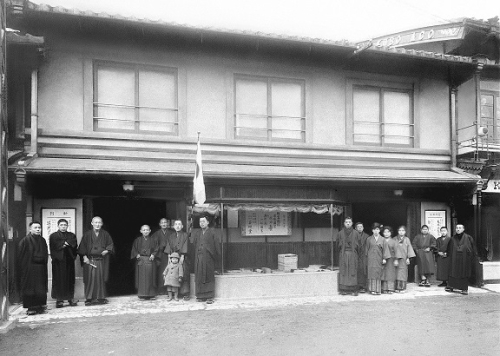 Unsōdō was able to develop against a backdrop of change in Japanese society.  Key contributory factors were the rise of the textile industry, modernisation of crafts, establishment of department stores, systematisation of the art world.  The emergence of a middle class with an interest in culture and a willingness to buy created a growing market for Unsōdō’s publications. In this article I would like to give a brief outline of the history of Unsōdō, the changes in Japanese society, arts and crafts in Kyoto, and the expansion of Unsōdō’s achievements.

First, let us look at the history of Unsōdō. The firm was founded in 1891 in the Teramachi Nijō district of Kyoto by Yamada Naosaburō 山田直三郎 (1866-1932). He gained his knowledge of the workings of the book trade from Tanaka Jihei 田中治兵衛, proprietor of the Kyoto bookshop Bunkyūdō 文求堂, before setting up his own independent store specialising in art books. He asked the literati painter Tomioka Tessai 富岡鐡斎 to create a name for the new enterprise. The name he chose, Unsōdō 芸艸堂, was inspired by ‘unsō’ 芸艸, a Japanese name for the herb rue (Latin: Ruta graveolens). This strong-smelling plant, traditionally believed to be an effective insect repellant, was used to make bookmarks and was thus a fitting name for a bookshop. 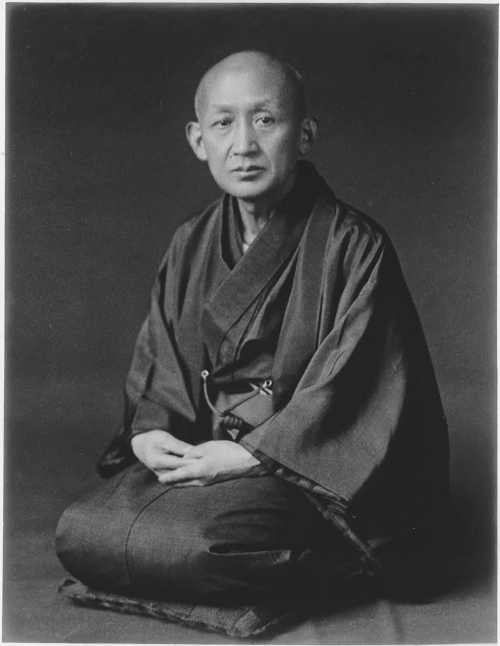 Yamada Naosaburō was born into the Honda family, proprietors of a book-binding business. Alongside book-binding, the eldest son Honda Ichijirō 本田市次郎 (1863-1944) and third son Honda Kinnosuke 本田金之助 (1868-1930), began to publish kimono pattern books which were very much in vogue at the time. From around 1889 the company was known as Honda Unkindō本田雲錦堂. Large numbers of kimono-related books were being published in Kyoto at that time and there was intense competition between Unsōdō and Unkindō, a rivalry which stimulated the creation of a great many design books. However, as they were brothers first and foremost, Naosaburŏ, Ichijirō and Kinnosuke eventually merged the two companies in 1906 under the name Unsōdō. From then on, all three brothers worked together in the publishing business. They focussed on works for the kimono industry, producing lavish publications which used not only traditional colour woodblock printing but also cutting-edge technology of the day such as collotype-printed photographic plates and heliotype colour plates. These luxurious books were expensive but proved profitable and were published in rapid succession. This momentum continued and in 1918 Unsōdō opened a branch in Yushima in Tokyo. 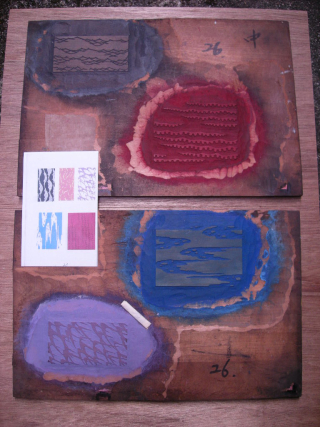 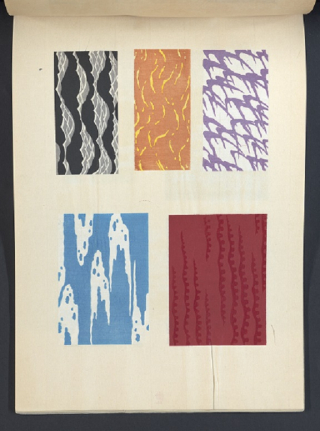 Unsōdō also managed to acquire woodblocks for art books from other publishers in Kyoto, Osaka and Tokyo and to republish the works as Unsōdō imprints. 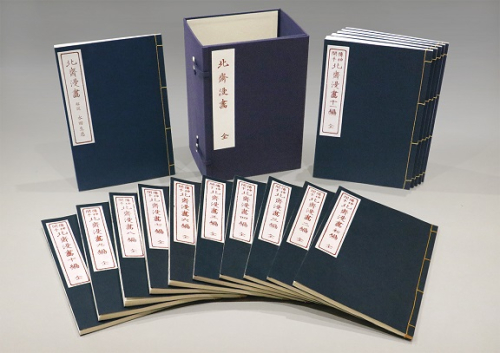 Despite the occasional periods of economic depression, Japanese society continued to develop, thanks to official campaigns to encourage new industries and also to the special demands of times of war. The textile industry was one of the first to attract the attention of business entrepreneurs. Modern textile factories were set up across Japan, long-established kimono dealers became department stores, textile wholesalers and brokerage businesses were established and a skilled workforce developed. Traditional local textiles came to be distributed through kimono dealers and department stores. The successful, affluent classes became art collectors and ordinary people were able to see works of art in museums or the art galleries of department stores. 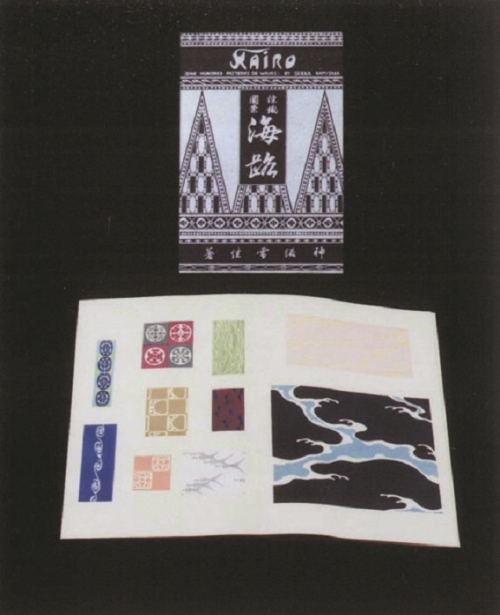 Kyoto’s replacement by Tokyo as the national capital in 1869 and the resultant departure of the Emperor, Imperial Family and upper aristocracy, led to a period of uncertainty for the city. Yet this sense of crisis acted as a catalyst to the modernisation of the arts and crafts industry, taking advantage of a local population with a deep connection to traditional culture and the existence of large numbers of artisans skilled in various crafts. Descendants of court painters set up painting academies, and art schools were founded to promote the modernisation of art education. Cooperative associations were established for many industries including lacquer manufacturing, ceramics, dyeing and weaving. These organisations worked to improve standards and modernise designs in their respective industries, to stabilise distribution networks throughout Japan and to use the high levels of expertise developed over centuries to produce art objects for export. This was an important means of acquiring foreign currency for Japan at that time and was actively supported by the government.

Key reasons for the expansion of Unsōdō’s business were the appearance of “art books born from social change” and the increase in the number of “people who need art books”. An example of the former would be catalogues for displays of new works that were held in kimono dealers and department stores, or for exhibitions in the painting academies. “People who need art books” included those involved in the creation of art and craft objects as well as those selling them – artists, designers, craftspeople and teachers, and also merchants. Painting manuals, pattern books and picture albums had existed in the Edo Period (1600-1868), but in the later 19th century new publications were needed that took into account new tastes and Western influences. Art schools and industrial technology institutes across Japan needed textbooks and reference works. Then, as now, art books tended to be large format and require elaborate binding and printing techniques, resulting in higher prices. The reason these books ‘flew off the shelves’ was that they were not only bought for personal interest and pleasure but were used for work and were provided in the work place. 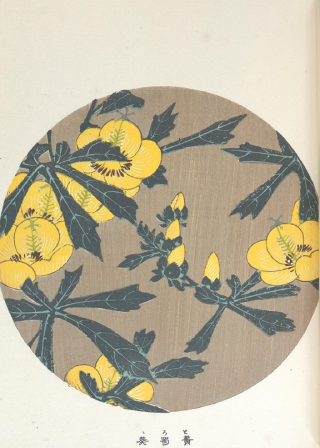 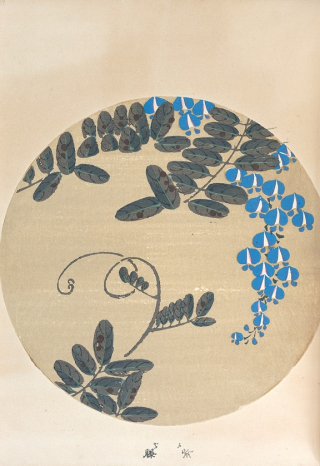 In other words, art books were an inseparable part of industrial development. As a Kyoto publisher, Unsōdō, played its part in disseminating the essence of Japanese history – the aristocratic culture with the emperor at its summit, the millennium of craftsmanship that produced ‘guides to traditional customs’ (yūsoku kojitsu), patterns and designs, cultural properties, handicrafts, collectables, and even the foreign art works and designs that were incorporated over the centuries.

In recent years, woodblock-printed design books of the late Meiji Period have been attracting growing attention. It was a time when Kyoto, the centre of Japan’s publishing culture since the Middle Ages, was full of skilled craftspeople. Although in terms of cost, print run and finish, woodblock printing was the only practical method of colour printing available, during the late 19th and early 20th centuries woodblock printing technology developed markedly. It is characterised by what can be called ‘high quality art printing’ and its ‘human touch’. Moreover, we still marvel at the creativity of the designers of the time. As well as the professional designers, artists who specialised in Japanese and Western-style painting also created designs as a side-line to their main careers. Today we cannot easily tell how many people were involved in the world of design at the time. This is because the modernisation of Japanese art has brought a division into ‘artists’, who created fine art, and ‘craftspeople’, who created practical wares. Designers themselves have not yet been appraised, and often artists’ design work has not been considered in an assessment of their careers.