A Family Affair: The Dukagjinis in the British Library’s Ottoman Turkish Collections

(Sorry, but there’s no RnB to be found here; you’ll have to exit now if you’re looking for some Mary J. Blige) 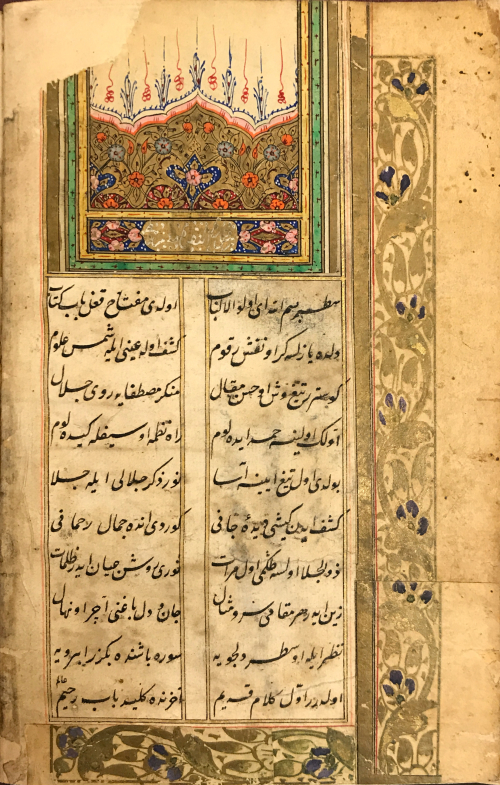 Sometimes, large collections of data can only find their way into electronic databases through the mind-numbing, but essential, process of manual data entry. In the case of the British Library’s Ottoman manuscripts, the transfer of details by hand from acquisition slips into our online catalogue is the quickest means of making information about our holdings available to the widest number of people possible. There is, of course, an additional benefit to going through hundreds of these slips of paper. In doing so, I’ve been able to pick out patterns of acquisition, and to connect volumes of similar or identical content purchased by or bequeathed to the Museum or Library over the course of its history. In this blog, I’m going to explore one such group of items, all of which are in some way related to members of the Dukagjini family.

To be fair, the vast majority of the works in question are collections of poetry or prose by one Dukagjini, Dukaginzade Taşlıcalı Yahya Bey (Jahja bej Dukagjini in Albanian). Yahya Bey was born in 1498 CE in Taşlıca, today known as Pljevlja, Montenegro. The Dukagjin family were a fairly well-known Christian Albanian group in northern Albania and western Kosova. They are reputed to be descendants of the Progoni, founders of the Principality of Arbanon, the first state in Albanian history. While a branch of the family fled Ottoman rule and established themselves in the Venetian-controlled city of Koper (contemporary Slovenia), the rest stayed, gradually integrating into Ottoman suzerainty. A number of their children found their way to Istanbul in a pattern similar to that of Yahya Bey. Dukaginzade Ahmet Paşa achieved the rank of Grand Vizier of the Ottoman Empire in 1514-15 CE. His son, Dukaginzade Mehmet Paşa, went on to great feats too, becoming governor of Egypt in the mid-16th century CE. Aleppo even has a Dukaginzade Mehmet Paşa Mosque complex, which is known in Arabic as al-Adiliyah Mosque (جامع العادلية).

Yahya Bey was brought to Istanbul as part of the Devşirme, an Ottoman institution of forcible recruitment through which non-Muslim boys were selected by Imperial authorities, taken from their families, converted to Islam, and then entered into Imperial service. Yahya Bey therefore moved to Istanbul at an early age. He originally trained to be an archer, but eventually impressed Kemalpaşazade (Şeyh-ül-İslam and author of the Tevarih-i Âl-Osman) with a kaside he had written. He thus began his path through Imperial educational structures and into the bureaucracy. He was known as a sâhib-i seyf ü kalem, or master of the sword and pen, meaning a man who was both a warrior and a poet. Apart from his prolific poetical oeuvre, which we’ll see below, he was also a respected soldier, participating in the Battle of Çaldıran in 1514, the Ottoman-Mamluk War in 1516-17 CE, and even the Siege of Szigetvár in 1566 CE. But luck could be fickle for Ottoman civil servants and warriors. When Yahya Bey wrote a poem elegizing Kanunî Süleyman's first-born, Şehzade Mustafa, Grand Vizier Rüstem Paşa, Mustafa’s murderer, lashed out at the poet. When the dust settled, Yahya Bey was exiled to the Balkans. Some say that he took up residence in Zvornik, in present-day Bosnia and Hercegovina. Others claim that he actually spent his final days in Timișoara/Temesvár, Romania. Wherever it might have been that Yahya Bey lived in exile, it was there that he eventually died at some point between 1575 and 1582 CE. 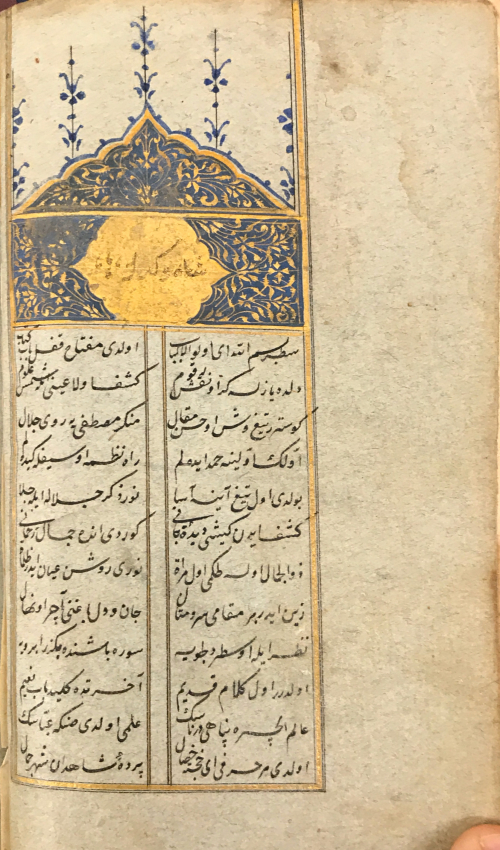 The Library holds at least 15 different volumes containing works by Yahya Bey. Most of these are not combined with the works of other writers, although Add MS 7936 (ff 28v-106v, Gülşen-i Envar) and Or 1154 (ff 59-136v, Gencine-i Raz) are both mecmualar or codices containing poetry by Yahya Bey and other poets. The other volumes cover the breadth of his oeuvre, including his Hamse ( Or 1147 and Or 7222); Şah u Geda ( Or 1159, Or 7223, Or 7224, and Or 16422); Gencine-i Raz ( Or 37, Or 1162, Or 7225, Or 16390, Add MS 5979); Gülşen-i Envar (Add MS 19446); and Usul-name or Kitab-i Usul (Add MS 5978). The Hamse (which comes from the Arabic word khamsah خمسة, meaning 5) contains the other named poems, as well as a fifth work, Yusûf u Züleyha. The Library does not appear to hold separate copies of his other works, Edirne Şehrengizi and İstanbul Şehrengizi, and it is likely that other poems that feature in his Divan are scattered in various mecmualar forming part of the Library’s holdings, waiting to be catalogued in full and connected to his name. 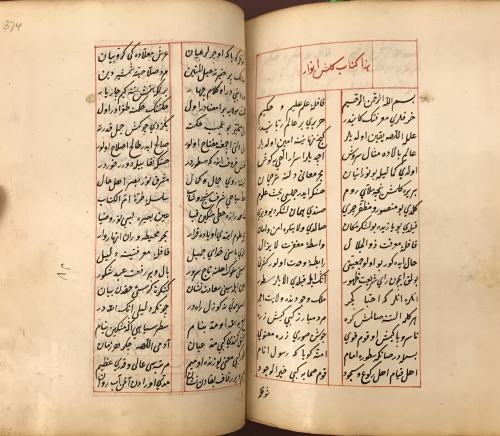 Yahya Bey is well-represented within the Library’s holdings in part because of the high esteem in which he was held by contemporary literati and soldiers as well as by future generations of scholars. Even while in exile, he impressed the Ottoman soldier, poet and historian Mustafa Ali, then stationed in Bosnia, who was later inspired by Yahya’s story in writing his own poetic works. In the late 19th and early 20th centuries, his popularity was encouraged by the English Orientalist E. J. W. Gibb , a prolific collector of West Asian manuscripts and a giant in Anglophone Ottoman Studies. The full impact of his and other British Orientalists’ collecting and analytical practices has been succinctly reviewed by Dr. Nagihan Gür in a number of her published papers. Gibb claimed that Yahya Bey was a particularly creative and innovative poet, borrowing and adapting themes and styles from Persian poetry. He further elevated the poet for his mastery of Istanbulite Ottoman Turkish, claiming that it was not possible to find any hint of Yahya’s Albanian origins in his use of the Ottoman language. As Gibb’s six-volume A History of Ottoman Poetry (OIF 894.351) became a staple of literary criticism for the Anglophone world in the 20th century, so too would Yahya Bey find a place within the Orientalist pantheon of Ottoman poets established by European and American scholars. 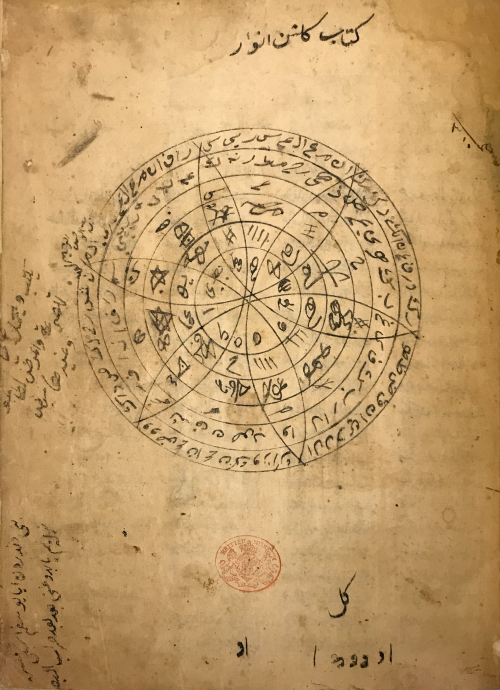 In 1901 and 1909, the British Museum (whose text-based collections passed to the Library in 1973) received dozens of Ottoman Turkish (as well as Persian and Arabic) manuscripts from Gibb’s estate. It should be no surprise, then, that four of the Library’s holdings of Yahya Bey’s poetry and prose are from Gibb (Or 7222, Or 7223, Or 7224, and Or 7225). But there are, of course, other sources. Nine volumes pre-date Gibb’s bequest. Two were received from Hilgrove Turner (Add MS 5978 and Add MS 5979), while one (Add MS 7936) came from the Rich Collection, amassed by the Franco-British businessman and diplomat Claudius Rich. The copy of Gülşen-i Envar at Add MS 19446 entered the British Museum’s holdings thanks to H(endrik?) Edelman, and Or 37 was sold by George Cecil Renouard. In 1872, four volumes were purchased from the Polish-Russian diplomat and famed Orientalist (particularly within the realm of Kurdish Studies), Alexandre Jaba or Żaba. The volumes (Or 1147, Or 1154, Or 1159 and Or 1162) speak to Jaba’s broader interest in the languages and literary cultures of West Asia and the Caucasus, as well as the formation of a distinct school of Oriental Studies in the Russian Empire. His legacy, and that of the other scholars who worked on such texts within the Tsars’ realms, are taken up in The Heritage of Soviet Oriental Studies (ELD.DS.18320), edited by Dr. Michael Kemper and Dr. Stephan Conermann. 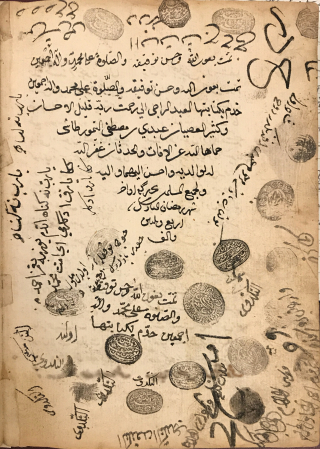 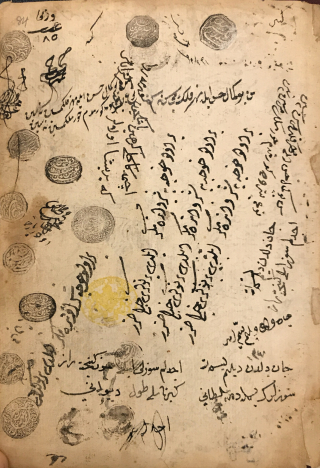 Another two items would join this list thanks to acquisition activities in the late 20th century. Both Or 16390 and Or 16422 are works that were previously held by C. S. Mundy, another of Great Britain’s well-known Turkologists, this time resident at the School of Oriental and African Studies in London. These men, of course, were the final stop for the manuscripts before they entered the Museum or the Library. Before them, countless Ottoman and other readers bought, enjoyed, shared, and sold these works. Some of them left their names or seals on the pages and fly-leaves of the volumes, attesting to the great popularity of a number of the items. Much research is still needed to understand just what paths these texts followed throughout their lives, and how such histories reflect reading and collecting habits of Ottoman audiences. 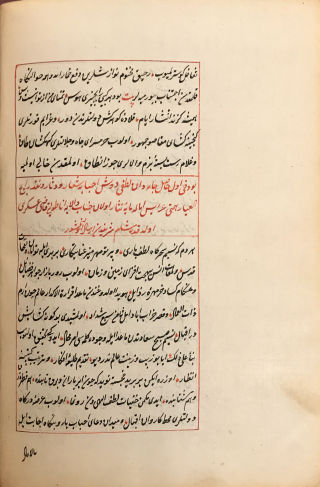 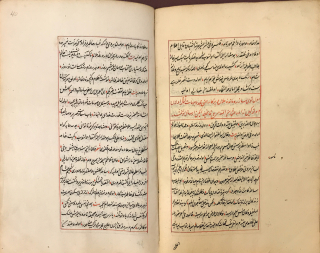 A copy of a letter written to Dukaginzade Osman taken from a collection of compositions attributed to Veysi. (Münşeat-i Veysi-yi Merhum, 18th century CE. Or 7466, ff 39v-40v)

The story of Ottoman Dukagjinis and the British Library’s Ottoman manuscripts does not end with Yahya Bey. Nor, apparently, did the story of the Dukaginzadeler in the Ottoman bureaucracy. Or 7466 is a münşeat of the late 16th-century Ottoman poet Veysi, which was purchased from I. E. Gégou on 9 April 1910. A münşeat is essentially a collection of letters and other texts that can be used as models for future correspondence. The genre is fairly common within our holdings. The general idea was popular in many cultures until fairly recently; I remember having a French correspondence manual in the 1990s as a supplementary text for high school and university French class. In this particular volume, we find a copy of a letter addressed to Dukaginzade Osman (died 1603 CE), Kadı of Cairo. While Dukaginzade was not nearly as well-known as his relatives, his name does appear in a number of different münşeat held in various locations and penned by different authors. Most recently, he came up in the chapter “The law school of Mehmed II in the last quarter of the sixteenth century: a glass ceiling for the less connected Ottoman Ulema” by Dr. Baki Tezcan, found in Ottoman War and Peace (ZA9.9.a.6407(68)). The British Library’s own holdings, then, would appear to mirror the broader fortunes of the Dukagjini family in the ebb and flow of the Ottoman Imperial order.

As more of our acquisition slips enter the online catalogue, it is possible that further volumes of Yahya Bey’s work will be reconnected to those already identified. Perhaps items relating to other members of the Dukagjini family might be found too. Whatever happens, those manuscripts already documented paint a picture of how one extended family had a profound effect on Ottoman society and history in the 16th century. They also show how collecting practices impact scholarship and our later understanding of the evaluation and appreciation of cultural products in Ottoman society. Finally, the Dukagjinis shine a light on the complexity of kinship, forcible recruitment, and ethnic origins in the Ottoman Empire. At times, statecraft and literary prowess are more than just learned skills; they’re a family affair.

Dr. Michael Erdman, Curator of the Turkish and Turkic Collections