For your eyes only: Charles Masson’s observations on the Durrani states

Searching the name ‘Charles Masson’ online returns a healthy amount of results about a rather mysterious historical figure. Born in England with the name ‘James Lewis’, this enigmatic individual enjoyed several adventures in Asia during his relatively short life (1800-53). After deserting from the Bengal European Artillery in 1827, changing his name to Charles Masson, and travelling extensively throughout Afghanistan and modern-day Pakistan, he was hired by the East India Company to conduct antiquarian research in Afghanistan. He continued to travel and excavate sites until his true identity as a deserter was revealed in 1834, at which point he was forced to become an intelligence agent in Kabul in exchange for a royal pardon. He resigned in 1838 and continued to conduct archaeological work before returning to London in 1842. 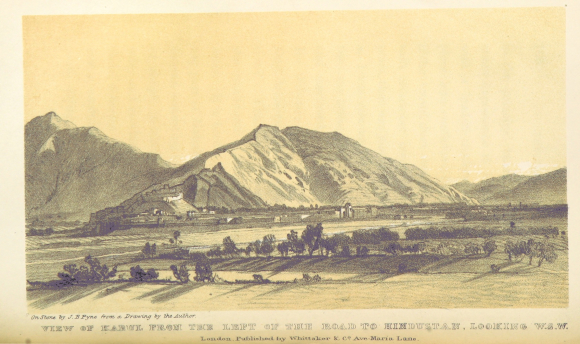 View of Kabul, from Godfrey Thomas Vigne's A personal narrative of a visit to Ghuzni, Kabul, and Afghanistan, and of a residence at the Court of Dost Mohamed. London, 1840, p. 194 (British Library Digital Store 1046.e.17)

It is his archaeological work for which Charles Masson is largely remembered today. Many of the objects that he took from Afghanistan and parts of modern-day Pakistan are now housed in the British Museum. Indeed, a substantial research project led by Dr Elizabeth Errington has provided a catalogue of material relating to Masson.

As well as the British Library’s Masson Collection , the Masson project catalogue points to traces of Masson’s story which can be found in less obvious sections of the India Office Records. As a cataloguer for the British Library/Qatar Foundation Partnership Programme, it was through an item from the Board’s Collections (IOR/F/4) that I was first introduced to the talented Mr Masson.

IOR/F/4/1399/55442A captures the beginning of Masson’s relationship with the East India Company. It starts with a letter from Political Resident in the Persian Gulf, David Wilson, who wrote excitedly to the Government of Bombay [Mumbai] in September 1830 to inform them of his encounter with a certain Charles Masson at Bushire [Būshehr]. Masson had made extensive observations on his travels through the Durrani states (parts of modern-day Iran, Afghanistan and Pakistan). Wilson enclosed these accounts in his letter, believing they would be of great value and interest to the Company.

Spanning nearly 514 pages, Masson’s accounts relate to the political status, culture, languages and religions of numerous states, provinces and tribes, and the routes taken during his travels. They include details of the people he encountered, caravan entourages, landscapes, climate, agriculture, villages and fortresses along the routes. In particular, Masson dedicates a significant space to describing ‘the Seicks’ [Sikhs] and Ranjeet Sing [Ranjit Singh, Ruler of the Sikh Empire].

Whilst the observations contain a lot of detail on a variety of subjects, it is possible to glean from Wilson’s letter the particular details that piqued his interest. He states that he queried Masson about the suitability of the routes taken for the conveyance of troops, and whether ‘vessels of considerable burthen’ could pass from Multan to the sea via the Ravee [Ravi] or Indus rivers. Wilson also notes Masson’s thoughts on whether Ranjit Singh planned to extend beyond Punjab, and if there was any concern amongst the Chiefs of Scinde [Sindh] about whether Singh intended to overthrow their power. 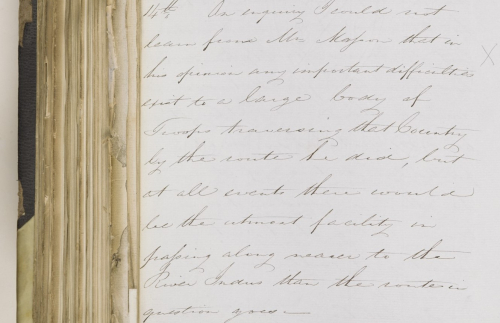 Extract of a copy of a letter from David Wilson, Resident in the Persian Gulf, to the Government of Bombay, 11 September 1830, discussing the suitability of a ‘large body of troops traversing that country by the route [Masson] did’ (IOR/F/4/1399/55442A, f. 235v). Crown Copyright

The details highlighted by Wilson’s letter from September 1830 are significant because they hint at British activity in Sindh and Afghanistan. The 1830s saw large parts of Sindh annexed by the British, followed by an 1838 treaty between the Company and Ranjit Singh to restore Shah Shojāʿ to power in Kabul which led to the First Anglo-Afghan War (1838-42). It is this context which reveals to us why Wilson thought Masson’s information was useful to the Company.

In his letter, Wilson also recommended that the Government of Bombay should consider employing Masson in some capacity. He wrote that he had sent Masson to Tabriz in July 1830, equipped with a letter for the British Envoy to Persia, asking the Envoy to ‘direct Mr Masson’s future enquiries to objects in these countries that require elucidation’ (IOR/F/4/1399/55442A, f 242r).

Whilst Wilson’s letter establishes the circumstances in which Masson was hired by the Company, it also touches on an important point which was to be addressed by Masson in later years – whether Masson had intended his observations to be used as intelligence.

Towards the end of his letter, Wilson wrote that, whilst he had not told Masson that he intended to send the accounts to the Government of Bombay, he argues that Masson ‘must have been aware, that a Public Officer situated as he knew me to be and making the enquiries I did, must have done so with a view to the good of the service.’ (IOR/F/4/1399/55442A, ff. 243r-243v).

However, whilst Masson later spoke highly of Wilson, he disputed the extent to which he had intended his accounts to be used as political information. Not long after his return to England, he published an account of his travels, entitled Narrative of Various Journeys in Balochistan, Afghanistan, the Panjab, and Kalāt. The preface to this work included the following passage (see image below): 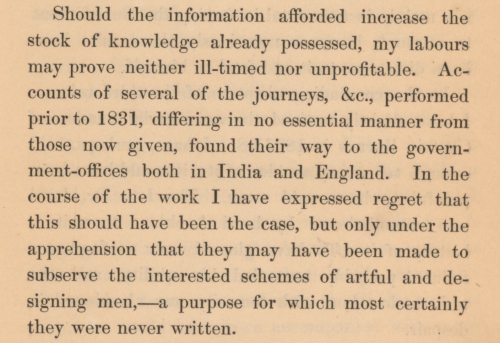 Extract from Volume 1 of Narrative of Various Journeys in Balochistan, Afghanistan, the Panjab, and Kalāt, p. v (Library of Congress DS377 .M4)

Therefore, it seems it was not made explicitly clear to Masson that Wilson was going to send the former’s observations to the British Government in Bombay. Taking into account that Masson was later forced to become an informant in exchange for his royal pardon, and that he went on to become a critic of the Company’s policy in Afghanistan in the late 1830s, this point adds an intriguing element to the question of how Masson viewed his relationship with the Company, both at the time and later. Did he naively assume that Wilson would not pass on his observations as intelligence, or was he fully aware of the ‘interesting schemes’ for which they might be used? Were his comments in the preface to his book a way of setting the record straight, or an attempt to portray his own past in a different light?

The relevant papers in IOR/F/4/1399/55442A form a small but significant part of the Masson project catalogue, as they reveal the interest that the East India Company had in Masson’s earlier explorations. In doing so, they serve as the opening chapter in the story of how Charles Masson became a British informant on Afghanistan, a role it is unclear he wanted to play.

Charles Masson, Narrative of various journeys in Balochistan, Afghanistan, the Panjab, & Kalât, during a residence in those countries : to which is added an account of the insurrection at Kalat, and a memoir on Eastern Balochistan, 4 vols (London: Richard Bentley…, 1844).