This blog post is written by guest contributor Prof. Dr. Volker Grabowsky, who has been Professor for the Language and Culture of Thailand at the University of Hamburg since 2009, and advisor to the Buddhist Archive of Photography in Luang Prabang Since 2006.  Grabowsky’s blog looks at the photographs taken by Hans Georg Berger of libraries in Laos, that were acquired by the British Library in August 2020.

The ancient and exceptional manuscript culture of Laos has survived colonial rule, war and revolution as well as rapid modernization in a globalized world. Unlike in many parts of the world, production of manuscripts did not stop during the 20th century in Laos, where traditional ways of writing have been preserved by monks and lay scribes until present times. The oldest dated manuscript, a mono-lingual Pali palm-leaf manuscript containing parts of the Parivāra of the Vinaya Piṭaka, was made in 1520/21 and is kept at the National Museum of Luang Prabang (formerly the Royal Palace). It is also the first documentary evidence of the Dhamma (Tham) script in the Lao Kingdom of Lan Sang. This sacred script is a special feature of Lao literature. It originated in the neighboring northern Thai kingdom of Lan Na – probably as a derivative of the ancient Mon alphabet of Hariphunchai - in the late fourteenth century and made its way south through the Mekong river basin. As its name indicates, this script was used for the writing of the Buddhist scriptures and other religious texts. Next to this script, the Lao also developed a secular script nowadays called “Old Lao script” (Lao Buhan script). 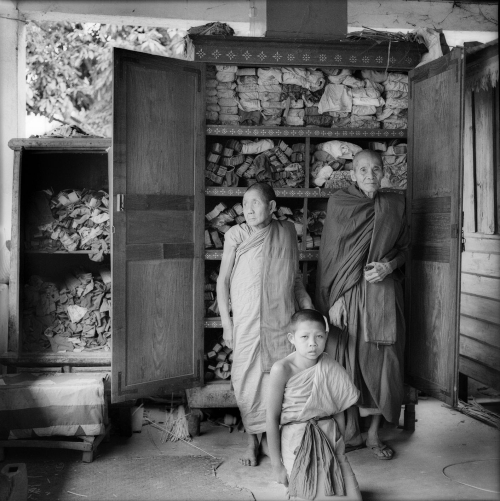 Lao manuscripts were mostly inscribed with a stylus on rectangular cut and cured palm-leaf sheets varying in length. Each sheet had two holes; a cotton string was passed through the left one, making it possible to bind several palm-leaf sheets together as one bundle, or fascicle (phuk). Recent research estimates that more than ninety percent of Lao manuscripts are “palm-leaf books” (nangsü bai lan). The number of leaves in a given fascicle depend on the length and/or the number of text pages. All fascicles of palm-leaf manuscripts are fastened by a string (sai sanὸng). Generally, numerous fascicles of palm-leaf manuscripts which contain the same version of a literary text are fastened together in bundles, called sum. Two wooden boards are frequently added to such a bundle for protection. The bundle usually is wrapped in a piece of cloth and tied with a cotton string. It is called mat.

Palm-leaf is not only the most widely used but, in this region’s subtropical climate, also the most durable “soft” writing support of the Lao cultural area. It was mostly used for Buddhist text. The leporello format was used for secular texts such as chronicles, legal texts, medical and astrological treatises, official documents, non-religious literary works, and only occasionally, Buddhist texts. For these leporello manuscripts, a cardboard-like paper made out of the bark of the sa tree (Broussonetia papyrifera L. vent.) was used. The grayish sa paper was inscribed on both sides, often with black ink. Sometimes it was first painted with a layer of lampblack and then written on with yellowish ink, or white chalk. The covers of both phap sa, as such leporello manuscripts are called in Lao, as well as palm-leaf manuscripts, were often decorated with lacquer and gold. The manuscripts were kept in elaborately fashioned wooden boxes. In addition, bound books exist, notably in the Tai Lü areas of northern Laos, such as Müang Sing, where each piece of paper has been folded over once vertically, so that it becomes much longer than it is broad. By folding the paper, both the front and the back page of one sheet can be used for writing. These sheets of paper are sewn together along one of the vertical sides. This kind of manuscript is called phap hua. In the manuscript tradition of the Tai Lü, pap sa manuscripts play a very important role and are even more widespread than palm-leaf manuscripts, the latter being restricted to the writing of religious texts. 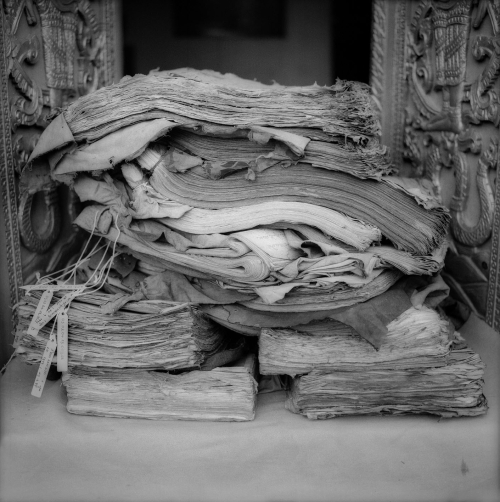 The vast majority of Lao manuscripts are not kept in private households but in monasteries. The most precious manuscripts are stored in small and elegant buildings devoted solely to the conservation of manuscripts. They are called hò tham (“House of the Dhamma”) or hò trai (“House of the three [baskets]) because they are dedicated homes to Buddhist scriptures. These libraries are integrated into the monastic site (vat) of which they embrace the organization and architectural style. According to traditional Buddhist belief, no matter whether they were written carefully or not, manuscripts should not be treated disrespectfully, or kept in a demeaning place. The texts that manuscripts contain, especially the ritual ones, should not have any insertions or other writing added to them. Any person who breaks this rule would lose the respect of devout Buddhists. Traditionally, laywomen were not supposed to touch religious manuscripts directly, even if very often they were the persons who donated them to the monasteries. This tradition came to an end during the country-wide effort of manuscript preservation of the National Library of Laos since the 1990s, where laywomen were prominently involved. 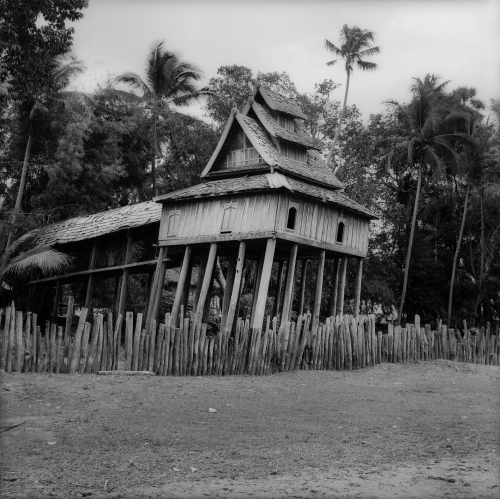 It is the sponsor or donor, not the scribe, who is called the “maker” (phu sang) of a manuscript. Usually, its “making” is recorded in the colophons following the end of the text. Here, the names of the leading monastic or lay supporter(s) or mūlasaddhā who took the initiative in commissioning the writing of the manuscript is mentioned. This person provides the writing support and pays the scribe, usually a learned monk or ex-monk. The main aim of that pious deed is to help support the Teachings of the Buddha to endure for 5,000 years. As such, it is expected to bring in return to the sponsors, donors, and – in the case of manuscripts – scribes important karmic benefit. Scribes were exclusively male; recent research found that a surprisingly high number of principal donors were women. In the case of Luang Prabang, we noted a substantial number of manuscripts donated by royalty and members of the aristocracy.

Between 1992 and 2002 the Preservation of Lao Manuscripts Programme, run by the National Library of Laos and supported by the German Ministry of Foreign Affairs, surveyed the manuscript holdings of 830 monasteries all over Laos and preserved almost 86,000 manuscripts. Of these, around 12,000 manuscripts were selected for microfilm recordings which are now accessible in the Digital Library of Lao Manuscripts. More recently, a number of digitization projects supported by the British Library’s Endangered Archives Programme (EAP)  and the Digital Repository of Endangered and Affected Manuscripts (DREAMSEA) focused on the particularly rich manuscript collections in Luang Prabang’s monasteries, the royal city which since the 14th century has been the centre of Lao Buddhism. 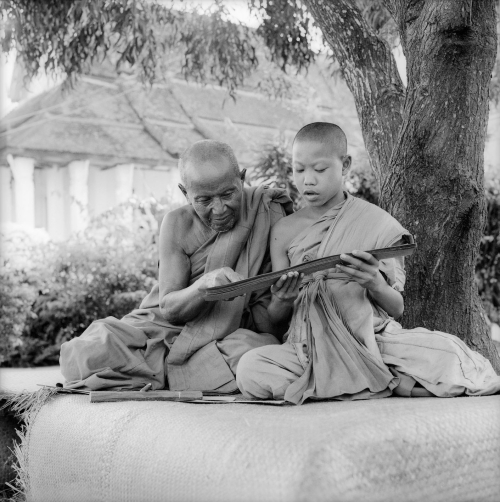 Hans Georg Berger, a photographer and writer born in 1951 in Trier, Germany, surveyed the situation of Lao manuscripts in the context of his photographic documentation of Lao ceremonies, rituals, meditation and everyday life since 1993. From 2006 to 2011 he was grant-holder of three projects of the Endangered Archives Programme which resulted in the digitization, identification and safe storage of more than 33,000 photographs taken and collected by the monks of Luang Prabang for over 120 years.

His collaboration with the Buddhist sangha, the National Library of Laos and the Buddhist Archives of Luang Prabang created a unique corpus and overview on Lao manuscript culture from which 60 photographs, both digital and printed, were acquired for the Library's Visual Arts collections. Hans Georg Berger's work for the Endangered Archives Programme was documented in the short film "Theravada Vision".

Berger, Hans Georg, Khamvone Boulyaphone. Treasures from the Buddhist Archive of Photography : historic photographs taken or collected by the monks of Luang Prabang between 1890 and 2007. Luang Prabang: Anantha Publishing, 2010