In recent months I’ve been working on manuscripts in the British Library which formed part of Tipu Sultan’s library and were acquired by the East India Company after the fall of Seringapatam in 1799. The history of how this part of the collection came to London has been recently described by Joshua Ehrlich (Plunder and prestige) and in several blogs by myself (notably Revisiting the provenance of the Sindbadnamah). The collection itself, however, was made up of many smaller collections, acquired mostly by conquest, and it is on one of these that I will focus today, namely the collection of the Sufi Muhammad Najib Khan Shahid (‘martyr’), an official of Anvar al-Din Khan, Nawab of the Carnatic from 1744 to 1749. While the apparent contradiction between the spiritual and military roles of courtly life has long been acknowledged, it is reinforced by the identification I propose here of Muhammad Najib the political adviser with our Sufi author and collector, an identification which is underlined by a shared Chishti affiliation and high status, further evidenced by the acquisition details of Muhammad Najib's own collection. 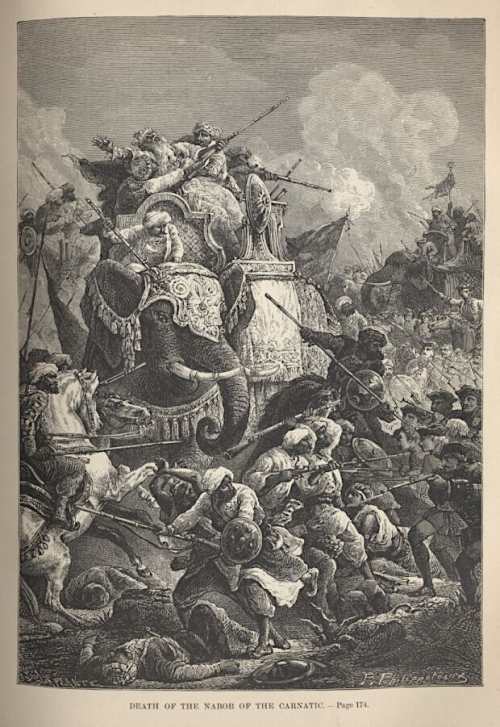 'The Death of the Nabob of the Carnatic' in battle against the French in 1749, an anachronistic interpretation by Paul Philippoteaux (1846-1923). According to Burhan ibn Hasan, Muhammad Najib Khan was sitting behind the Nawab. From M. Guizot’s A popular history of France, vol 6, Boston, [187-?], p. 174.

What do we know about Muhammad Najib Khan?

From the Tūzuk-i Vālājāhī, a history of the Walajah dynasty completed in 1786 by Burhan ibn Hasan, we learn that Muhammad Najib was originally a resident of Ajmer, and was one of the servants of the shrine of Muʻin al-Din Chishti. From the time that Anvar al-Din was stationed at the Mughal court in Shahjahanabad (ca. 1699), Muhammad Najib became “his intimate companion and a counsellor in all his affairs” and subsequently his “most intimate companion and the right hand man”. Caught up in the conflict between the rival factions of Hyderabad, the French and the East India Company, he was killed in action at the Battle of Ambur in 1749 during the Second Carnatic War together with his patron Anvar al-Din — after which they both became referred to in Persian sources as shahid (‘martyr’).

Muhammad Najib Khan’s scholarly credentials are evident from his Makhzan-i aʻrās (‘Treasury of death anniversaries’[1]), a calendar commemorating the deaths of Sufi saints which is based on a wide range of Chishti authorities dating from the 13th century onwards (Ernst, An Indo-Persian Guide). His lengthy introduction, in which he cites his full name as Muhammad Najib Qadiri Nagawri Ajmiri, offers a comprehensive guide to pilgrimage in the 18th century besides mentioning his patron Anvar al-Din Bahadur, a “lover of darwishes, the believer in their believers” (Ernst, p. 193). The work was completed on 5 Shavval 1156 (18 November 1743) during the period when Anvar al-Din was engaged in the army of Nizam al-Mulk Asaf Jah (Nizam of Hyderabad 1724-48). Muhammad Najib may also have been the subject of a biographical account, the Najīb nāmah, by the Sufi poet ʻAbd al-Latif Zawqi of Vellore (d. 1194/1780)[2].

Muhammad Najib Khan as a collector 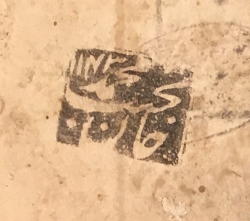 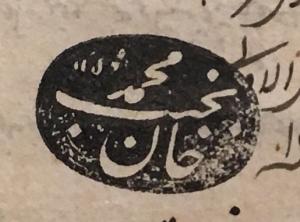 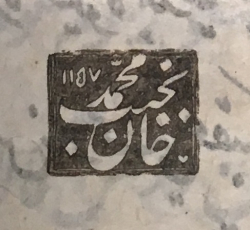 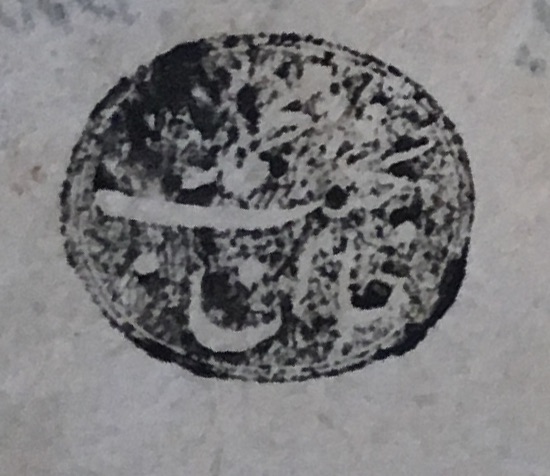 His manuscripts cover a range of Sufi and religious subjects including several works which he used in his Makhzan-i aʻrās mentioned above. All are in Persian excepting the Arabic ʻAyn al-ʻilm (IO Islamic 1672) which Muhammad Najib copied himself in Chicacole, at the time a dependancy of Hyderabad (Sīkākūl mutaʻallaqah-i Ḥaydarābād), completing it on 1 Jumada I 1149 (7 September 1736). In date they range from 1577 to 1749. Importantly, several manuscripts contain acquisition details which place Muhammad Najib in Hyderabad in 1743 and in Arcot between 1747 and 1749. These dates correspond with the periods when his patron Anvar al-Din Khan was Governor of Hyderabad (1725-1743) and Nawab of the Carnatic (1744-1749). Several of Muhammad Najib's manuscripts were purchased - prices varying from RS 3 to 50 - and a Mulla ʻAbd Allah in Arcot is mentioned as a specific source. One manuscript also carries the seal of an unidentified Ahmad Khakpaʼi whose seal occurs in at least one other manuscript in Tipu Sultan's collection. 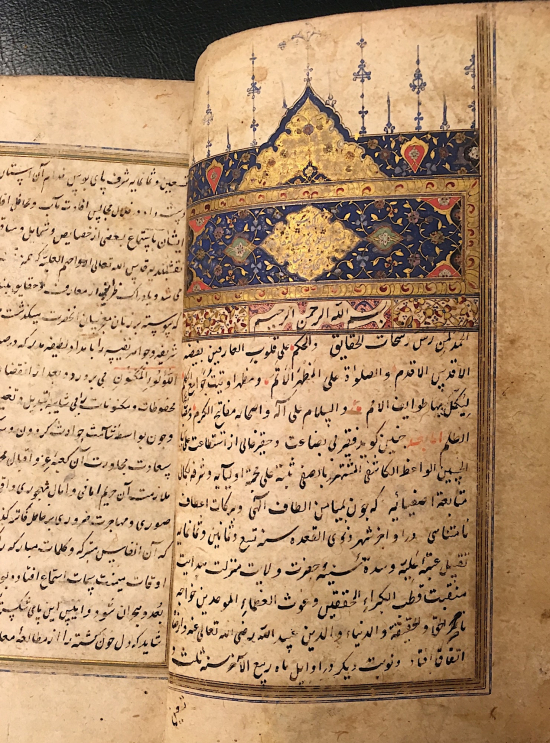 Details of Muhammad Najib’s manuscripts are given at the end of this post, arranged in approximate order of acquisition. His collection almost certainly included other manuscripts, some of which are likely to be found in the library of the Asiatic Society in Calcutta where a substantial portion of Tipu Sultan’s collection remains. Probable candidates include a copy of the Makhzan-i aʻrās mentioned earlier (Ivanow ASB 1631). Tipu Sultan was undoubtedly very interested in saint anniversaries, in fact a second copy of this work (Ivanow ASB 1632) was copied, presumably at his request, by Sayyid ʻAli Riza, Superintendent (mutavallī) of the Masjid-i aʻla, Seringapatam, who also copied IO Islamic 1638 and IO Islamic 2734 for Tipu Sultan. Tipu also commissioned his own calendar of saints' deaths (Ṣaḥīfat al-aʻrās, IO Islamic 1176[3]) which is, however, just a list of names and dates. 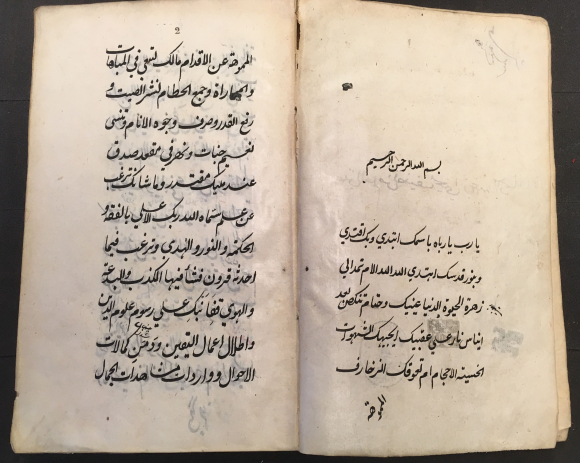 The opening of  ʻAyn al-ʻilm by an unnamed author, copied in Chicacole at the beginning of Jumada I 1149 (7 September 1736) by Muhammad Najib who signs himself in the colophon as Khan Sahib Muhammad Najib Khan. (IO Islamic 1672, ff. 1v-2r)

It is not clear what happened to Muhammad Najib's collection after his death. A reasonable supposition might be that it was absorbed together with the collection of his patron into the library of Anvar al-Din Khan's son Nawab ʻAbd al-Vahhab Khan, which was siezed by Tipu's father Haydar ʻAli in 1780. However none of the 16 volumes include any seals or other indications of having belonged to ʻAbd al-Vahhab. Until extensive research has been carried out on the corresponding collections of the Asiatic Society in Calcutta we will just have to speculate!

Ehrlich, Joshua. “Plunder and prestige: Tipu Sultan’s Library and the making of British India”, South Asia: Journal of South Asian Studies 43 (2020): 478-492.
Burhān ibn Ḥasan.  Tūzak-i-Wālājāhī ; translated into English by S. Muḥammad Ḥusayn Naynar. (Sources of the history of the Navvābs of the Carnatic; 1 & 2). Madras 1934-1939.
Ernst, Carl. “An Indo-Persian Guide to Sufi Shrine Pilgrimage”. In It’s not just academic: essays on sufism and Islamic studies. New Delhi, 2018, pp. 165-95; also available online in an earlier recension. Includes a lengthy discussion of the Makhzan-i aʻrās and also a translation of Muhammad Najib’s introduction.

[3] So titled in the introduction. Attributed in a note on the flyleaf to Muhammad Sharif of Adhoni. See Ethé 2733 for more details.

Posted by Ursula Sims-Williams at 12:23 AM