The Burmese Harp: (1) Seduction of the Senses

The British Library’s collection of digitised Burmese manuscripts, dating mainly from the 19th century, has many depictions of the Burmese harp or Saung (စောင်းကောက်). The Saung appears often in certain Jātaka stories, or tales of the previous lives of the Buddha, which have seduction and pleasure as one of the prevailing themes. The Mandhātu Jātaka tells the story of Mandhātā, a powerful king who had everything he could ever desire. Although he ended up ruling even the heavenly realms, he still remained dissatisfied. Shown below is a detail from an illustrated manuscript of the Mandhātu Jātaka (Or 4542/B). It gives us a peek into Mandhātā's court, which included beautiful musicians. The Saung player is turning curiously to see who is entering the palace. 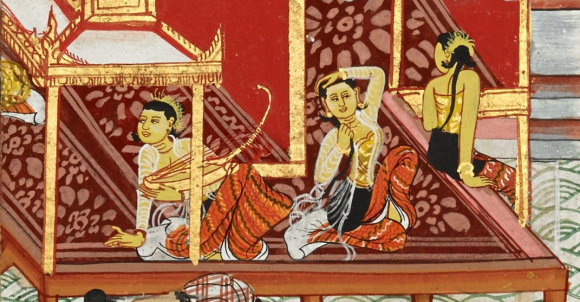 Women of the court, including a musician holding the Burmese harp or Saung, Mandhātu Jātaka, 19th century. British Library, Or 4542/B, f.57r

The Saung is a unique musical instrument with a continuous history that stretches over a thousand years. It is known for its soothing, melodious sound and can be recognised by its horizontal boat-shaped body and its long, inwardly arched neck. The ends of the strings, which used to be made from silk, are decorated with red cotton tassels. The harp is held on the lap and the strings are plucked with one hand, while the other is used for damping and staccato notes. The Saung usually accompanies a singer, who also controls the tempo with a bell (Si) and a clapper (Wa).

The earliest description of the Saung comes from a temple relief at Bawbawkyi in Sri Ksetra from the 8th century CE. It depicts a dancer with an accompanying harpist and a rhythm keeper. Tang chronicles from the 9th century also describe a delegation from the kingdom with thirty-five musicians and dancers that enchanted the court with their elaborate music performance. The orchestra included two harps and it performed twelve songs on Buddhist texts. These harps were tuned with pegs rather than strings, and interestingly peg-tuned harps are still used in Mon and Karen traditions. A later 10th-century Tang chronicle confirms that the music from these two geographic areas (from the present-day lower Myanmar) was the same. 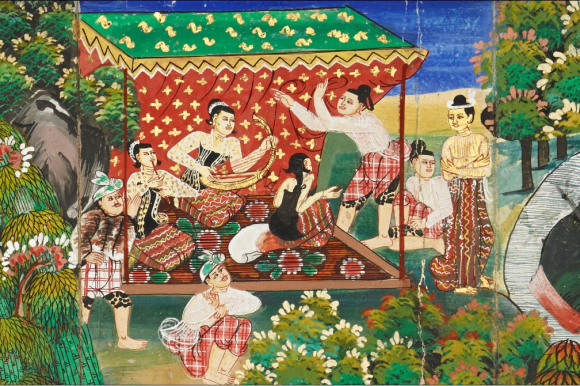 The Boddhisatta and his four brothers at the enchanted pavilion of music. Telapatta Jātaka, 19th century. British Library, Or 4542/A f. 53r

Another of the Jātaka stories, the Telapatta Jātaka (Or 4542/A) recounts the story of the Bodhisatta as a prince who had to travel through a dangerous, enchanted forest inhabited by ogresses. His five brothers accompany him, but are eaten one by one by the ogresses who seduce them with different sensory pleasures. In this manuscript illustration the Boddhisatta (on the right in gold) has arrived to the ogresses’ magical pavilion of music. By this time he has already lost one brother in the pavilion of beauty. One of his remaining brothers, the lover of music, is raising the curtain in order to be fully immersed by the entertainment, and is just about to become the next victim. The harpist is here accompanied by a flute and a singer. 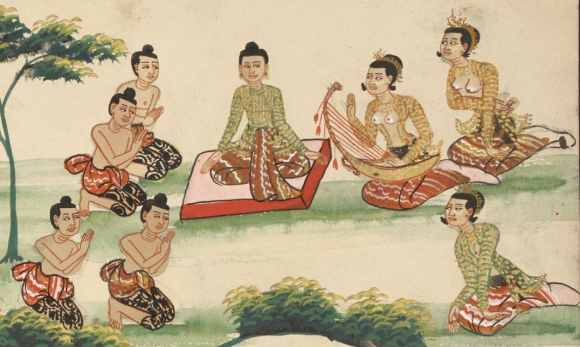 The famous Temiya Jātaka (Or 3676) is one of the ten last lives of the Buddha. He was a much wished-for son of the king of Benares. However, as soon as he discovered that his future kingly duties would involve inflicting punishment, he stopped speaking and sat motionless, as he did not want to inherit the throne. The king tried to budge him in many different ways, from tempting him with cakes to scaring him with snakes and loose elephants, but with no success. When Temiya turned sixteen he was put to the final test with beautiful women, song and dance. Although this illustration actually shows him quite tempted, he did in fact hold firm, and ended up not having to inherit the kingdom. 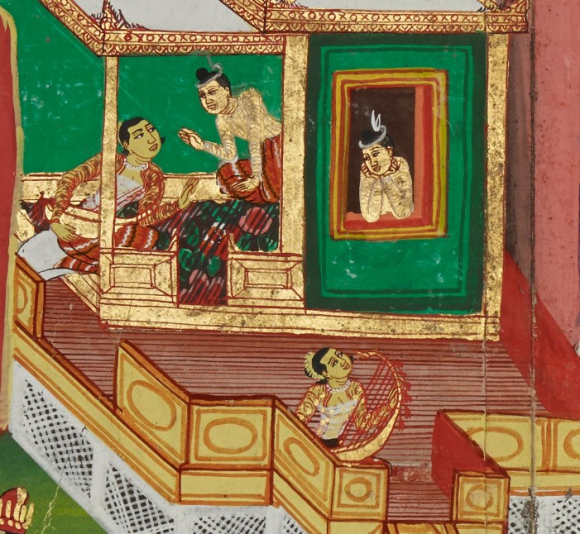 The Bodhisatta hears beautiful music through his window, and slowly falls in love with the harpist. Culla Palobhana Jātaka, 19th century. British Library, Or 4542/B, f. 89r

A somewhat similar story is recounted in the Culla Palobhana Jātaka (Or 4542/B). In this story as well, the Bodhisatta was born as a much-wanted prince, but from his earliest days as a baby he didn’t like to be nursed by women, and was only attended by male members of the court. The king grew worried about his son’s lack of desire for pleasure, for surely this would also include ruling the kingdom. A young dancing girl, accomplished in music and song, was therefore asked to seduce him. In return she would become his queen. When morning came she played and sang outside the place where the prince was meditating. Little by little he fell in love with her and they became closer. 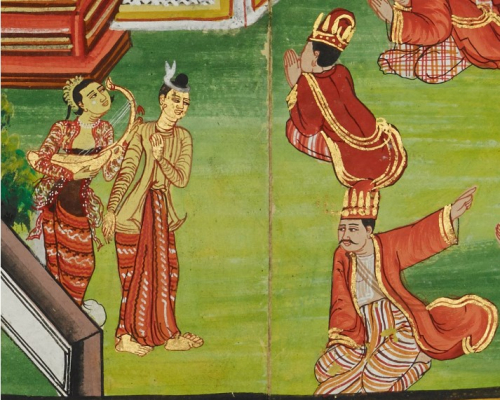 The Boddhisatta and his lover are banished from the kingdom after a fit of jealousy. Culla Palobhana Jātaka, 19th century. British Library, Or 4542/B, f. 89r

Unfortunately, the Bodhisatta became so enamoured with her that he ran amok the town in a fit of jealousy. As punishment for this bad behaviour both of them were banished from the kingdom and went on to live together in the forest.

In forthcoming blog posts I will give examples of how male harpists were depicted in manuscript illustrations, and how the Saung was inextricably entwined with the life of the Gautama Buddha.