‘A cessation of plunder and piracy… for ever’: the General Treaty with the Arab Tribes of the Persian Gulf

This year marks the 200th anniversary of the signing of the General Treaty with the Arab Tribes of the Persian Gulf of 1820. Though little-known today, this agreement between Britain and ten tribal rulers of the eastern Arabian coast was a decisive moment in the modern history of the Gulf, marking the beginning of 150 years of British hegemony over the region. Since 2014, the Qatar Digital Library has provided online access to a growing number of records from British Library collections that document this fascinating history. This anniversary year provides an opportune moment to consider the treaty that sits at the heart of this history, and has left a legacy that endures to the present day. 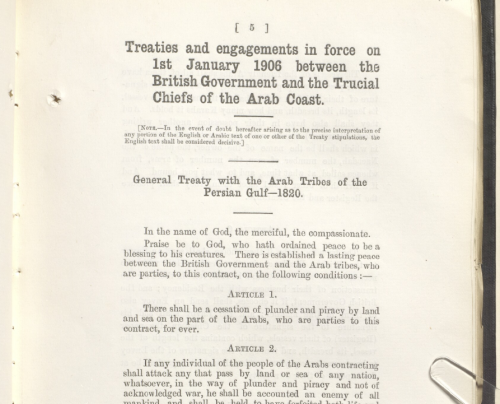 Background to the treaty

The treaty was the culmination of several decades of conflict between Britain and the Qawasim (singular Qasimi), an Arab tribe based around the port of Ra’s al-Khaymah. The Qawasim were at the head of a large network of tribes with an expanding influence on both shores of the Gulf. However, their rise brought them into conflict with other local powers, particularly Oman.

This was of serious concern to Britain, which had formed an alliance in 1798 with Oman’s ruler, the Imam of Muscat (Sayyid Sultan bin Ahmad Al Bu Sa‘id, reigned 1792-1804). The purpose of this alliance for Britain was to guarantee access to the Gulf. This was sought partly for its commercial potential, but primarily because the Gulf lay on the main line of communication between Britain and its expanding Indian empire. Official communications from India were regularly taken by ship up the Gulf to Basra, from where they were transported to Europe. Secure access to the Gulf was therefore vital for the British administration in India.

The rise of the Qawasim threatened to upset this arrangement, a fear articulated by British officials in the Gulf. For example, in July 1816 William Bruce, the British Resident at Bushire, reported on the Imam of Muscat’s efforts to challenge Qawasim power in Bahrain. Bruce observed that ‘if His Highness fails in reducing this island to obedience the acquisition of force to the piratical states [the Qawasim and their allies] will be such as to enable them to reduce Muscat if they please, and effectually to cut off all intercourse with the Gulph till such time as we are compelled to destroy them by fitting out an expedition to this quarter.’ (British Library, IOR/F/4/574/14024, f. 9v, soon to be added to the Qatar Digital Library). To officials like Bruce it was vital for Britain to maintain access to the Gulf, and he advocated the use of force to stop the further expansion of Qawasim power.

British expansion in India brought them into conflict with the Qawasim in other ways. The India Office Records contain many reports from this period of raids carried out by the Qawasim on shipping in the Indian Ocean. There was a long history of tensions between Arab and Indian trading communities, and it is far from clear that the attacks being attributed to the Qawasim were all carried out by them. Nevertheless, many Indian merchants began to appeal to the British authorities for assistance. In one petition, received on 5 February 1817, Siv-ji Govind-ji, a merchant writing from Bombay, claimed that his ship had been captured by four vessels owned by the Qawasim (spelled ‘Joasmee’ in the document, below) near its intended destination at Lakhpat in Gujarat, with the loss of most of the crew and cargo. Describing himself as ‘a subject dwelling under the British protection and colours’ he appealed to the British authorities in India for aid. 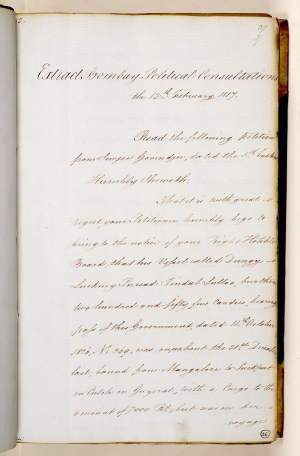 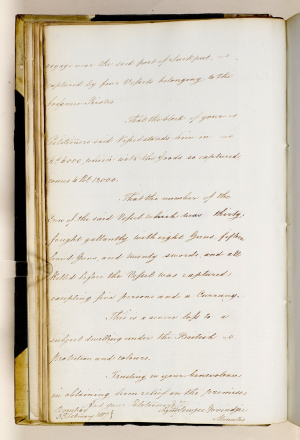 As the allegations against the Qawasim increased, officials in Bombay sensed an opportunity to finally bring their rivals in the Gulf to heel. In December 1819, with assistance from Oman, Britain sent a military expedition to the Gulf. The result was an overwhelming defeat for the Qawasim, leading to the capture of their fleet and the occupation of Ra’s al-Khaymah. It was in the aftermath of this crushing military campaign that the treaty was created. It was produced in English and Arabic and first signed on 8 January 1820, with more signatories added over the following weeks.

The contents of the treaty

What is striking in the treaty is how the defeated Arabs of the Gulf are addressed. The first article states: ‘There shall be a cessation of plunder and piracy by land and sea on the part of the Arabs, who are parties to this contract, for ever.’ In describing the actions of the Qawasim as ‘piracy’, the treaty echoed the comment of Bruce, who above referred to them as the ‘piratical states’. Such references abound in the India Office Records. In British eyes, the seafaring Arabs did not represent a political entity with whom relations could be conducted as equals. Rather, they were pirates, seeking only to destroy and disrupt the maritime trade of the Gulf and the Indian Ocean. If they continued in such behaviour, the treaty declared, they would be considered ‘an enemy of all mankind’.

The treaty went on to outline a new system of maritime conduct. From thenceforth, Arab ships were to carry a register and port clearance giving details of the vessel, its ownership and crew, and its ports of origin and destination. These ships were also to fly ‘the flag of the friendly Arabs’, a red rectangle in a white border, in order to signify their adherence to the terms of the treaty. Having complied with these demands, ‘the vessels of the friendly Arabs, bearing their flag above described, shall enter into all the British ports and into the ports of the allies of the British… and they shall buy and sell therein’. Through their adherence to the terms of the treaty, the Qawasim and their allies were to be weaned off their ‘piratical’ habits and integrated into the maritime trading system established by Britain in the Gulf and Indian Ocean. The legacies of the treaty

The treaty was therefore intended to establish a new order in the Gulf, and it marked the beginning of a deepening British involvement in the region. A naval force remained to police the new arrangements, and a series of subsequent treaties saw Britain adopting a role as enforcer of an ongoing truce between the different coastal tribes. By the start of the twentieth century, Britain had assumed responsibility for the defence and foreign policy of these tribes, and was increasingly intervening in the administration and development of their territories. In short, the Arabian coast of the Gulf had effectively become a British protectorate.

This position was maintained until 1971 when, with the British departure from the region, the states of the United Arab Emirates, Qatar, and Bahrain came into being. These states are therefore a direct legacy of the treaty of 1820, and remain governed by many of those same ruling families with whom Britain entered into treaty relations two hundred years ago. Furthermore, the red and white national flags adopted by many of these states provide a striking reminder of this treaty, having their roots in the ‘flag of the friendly Arabs’ first imposed on them in 1820.

The General Treaty with the Arab Tribes of the Persian Gulf is therefore central to understanding the modern history of the Gulf and Britain’s role within it. To explore this history in more depth, visit the Qatar Digital Library.

James Onley, “Britain and the Gulf Shaikhdoms, 1820-1971: The Politics of Protection”, CIRS Occasional Paper no. 4 (Doha, Qatar: Center for International and Regional Studies, 2009).