This guest blog is by Pragya Dhital, a British Academy Postdoctoral Research Fellow at Queen Mary University London. Her research concerns the British Library’s collection of publications proscribed in colonial India between 1907-1947, one of the largest archives of primary sources relating to any twentieth-century decolonization movement, a catalogue of which is now online. In this blog Pragya writes about her research on proscribed pamphlets, and a parallel collection of political pamphlets collected by the British author, George Orwell.

“For plugging the holes in history the pamphlet is the ideal form”
George Orwell, ‘Pamphlet Literature’, 9 January 1943

In a 1943 article for the New Statesman and Nation George Orwell regretted the surprising “badness of contemporary pamphlets”. From a survey of his own library he identified nine main trends, ranging from “Anti-Left and crypto-Fascist” to “Lunatic”, and described them as “practically all trash, interesting only to bibliographies”. This was surprising as “the pamphlet ought to be the literary form of an age like our own”, Orwell argued; a time “when political passions run high, channels of free expression are dwindling, and organized lying exists on a scale never before known”. Perhaps for this reason Orwell remained a keen collector of pamphlets, acquiring more than 2700 published from 1915-45. At his request this collection was donated to the British Museum Library in 1955 by his widow, Sonia Orwell, and is now held by the British Library. 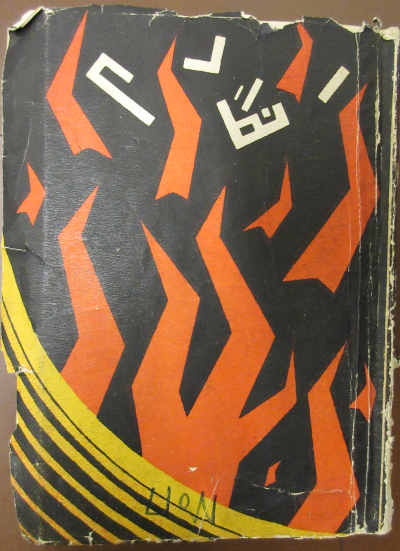 Angāre, [Burning coals], nine Urdu short stories and a play satirizing religious conservatism and colonial rule, edited and published by Sajjad Zaheer, who was later to co-found the Progressive Writers’ Movement. The white letters of the title are arranged right-to-left between flickering red flames on a black background. (Lucknow, 1932). British Library, PIB 47/17

Around the same time that these texts were being published, the Government of India was acquiring its own collection of political literature. The British Library’s archive of publications proscribed in colonial India consists of more than 2800 items banned between 1907-1947. Details for 1607 of the items are listed in the catalogue by Graham Shaw and Mary Lloyd, Publications Proscribed by the Government of India (London: British Library, 1985), now accessible online. The catalogue includes brief summaries of contents and biographies of the authors of these texts. Shaw and Lloyd’s introduction provides useful information about how they came to be proscribed and collected, building upon earlier work done by Norman Gerald Barrier. The catalogue is a valuable resource for scholars of modern South Asian history, politics and literature, and anyone interested in understanding the period during which this material was banned.

The British Library collection of proscribed Indian publications is particularly rich in pamphlets. Newspapers and magazines were also censored, and one of the main instruments for proscribing literature was the 1910 Press Act. But periodicals were much harder to systematically collect and store. The same qualities that made pamphlets handy containers of seditious material – the ease with which they are carried and concealed – also made them easier for the state to archive. 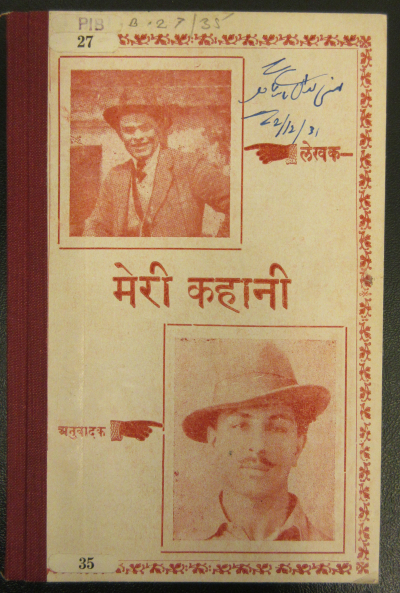 Orwell identified the “flexible” nature of the pamphlet form as uniquely suiting it to the urgent task of documenting “the events of our times”. This flexibility also makes it hard to identify its distinctive features, provoking the question, what exactly is a pamphlet? The UNESCO recommendation concerning international standardization of statistics relating to books and periodicals, defines the pamphlet as “a non-periodical printed publication of at least 5 but not more than 48 pages, exclusive of the cover pages, published in a particular country and made available to the public”. This excludes much of the literature in the proscribed publications collection, which is longer or shorter, sought to evade the attention of the censor, and circulated internationally. Āzādī ke dīvāne [Freedom’s Ecstatics], biographies in Hindi of various freedom fighters from the 1857 Great Rebellion to the Independence struggle. On the cover a portrait of Kunwar Singh (centre left), a leader of the Rebellion, is juxtaposed with that of Ashfaqulla Khan (centre right), member of the Hindustan Socialist Republican Army. [Not in the catalogue.] British Library, PIB 22/6

Looking for a definition that better encompasses this material, I turned to etymologies and historical precedents. The Hindi-Urdu terms pustikā, patrikā and risālah describe the pamphlet as a diminutive form of the book (pustak), extension of the letter (patra) and as bearer of a ‘message’ (risālah, related to rasūl, ‘messenger’ in Hindi-Urdu). European language equivalents such as chapbook, bibliothèque bleue, pliegos de cordel and Volksbuch emphasise how pamphlets were produced, distributed and received: the peddlers who sold them, cheap blue paper in which they were wrapped, string from which they hung, and the popular audience to whom they were addressed. I incorporate these aspects to include under the term pamphlet a wider range of short-form non-periodical literature: speeches, poems, plays and various ‘calls’ addressed to specific audiences – soldiers, policemen, farmers, women and youth. As well as reading their contents I pay attention to their material qualities and the ways in which they were disseminated.

Many of these works were multimedia texts, meant to be sung, recited or spoken, and involved an interactive relationship between performer and audience. “Read and read out loud” is a message that often appears on the proscribed publications; a sign of the influence of missionary publishing on these proselytising texts, from the use of new print technology to adoption of practices such as street preaching and itinerating that accompanied distribution of Christian tracts. These modes of textual transmission were more like gift exchange than reading, and did not require literacy on the part of their recipients. 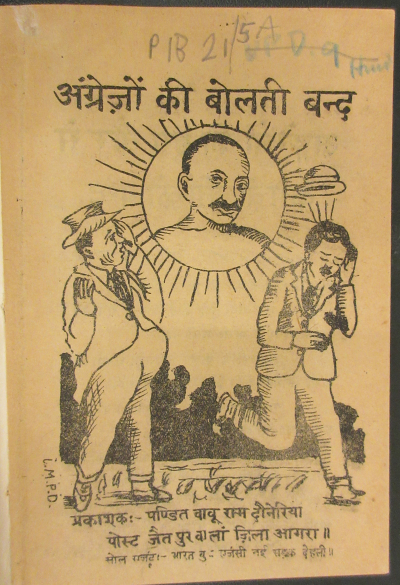 Much of this literature was also meant to be seen. In appealing to a mass audience, the creators of these texts drew upon a wide range of visual styles; India being a context in which multidenominational religious iconography and Anglo-European traditions of popular print are well known. [PIB 98]. The simple line drawings, chromolithographs and halftone photos in these texts often use Hindu imagery, and this has been the focus of previous studies of the proscribed publications collection. But these illustrations also appropriate the politically potent forms of the imperial portrait and police mugshot [PIB 22/6]. The use of Russian constructivist design principles in the red, white and black colour scheme and experimental use of typography in the proscribed publications is common to literature distributed in de-colonizing countries across the world. Some of this material was produced with Soviet funding – something prominently mentioned on the cover of the Urdu translation of the Communist Manifesto amongst the proscribed publications. 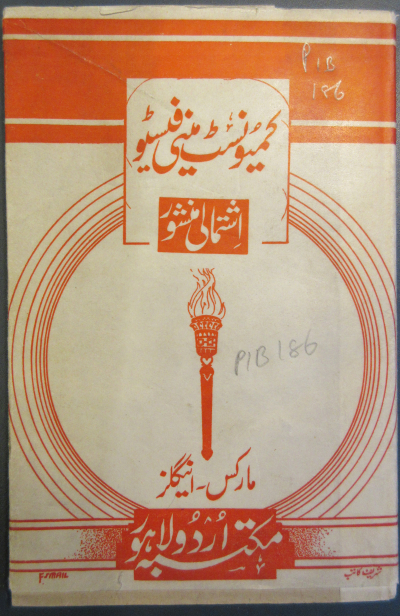 The audience for this literature may not have been literate, let alone “pamphlet-conscious” in the sense required by Orwell in his essay on the form. Their authors might well fit his description of “lonely lunatics who publish at their own expense”, or adherents of “crank religions” and political parties who lacked the necessary soundness and independence of mind needed to write a good pamphlet in his view. Writing under conditions of surveillance and censorship, they would have struggled to meet Orwell’s ideal: a pamphlet written by a “good writer with something he passionately wanted to say” read by as many people as possible. But precisely because of these limits the proscribed pamphlets reveal much about the anxieties of the colonial state, and the tactics deployed by nationalists to subvert restrictions on permissible speech. Hama bhūkhe-naṅge kyoṃ haiṃ? [Why are we hungry and naked?], an account of the evils of British imperialism, the first of a planned series of political pamphlets to be written in simple Hindi for a readership of peasants and workers. (Kanpur: Mazdur-Kisan Pustak-Mala Karyalaya, 1935). British Library, PIB 98

Art is not the same as “cerebration” Orwell concludes in “Good Bad Books”, his essay on the appeal of a type of book with “no literary pretensions but which remains readable when more serious productions have perished”. Orwell was aware that this was a quality ‘good bad books’ shared with propaganda and counterpropaganda; texts in the Orwell and proscribed publication collections also gain power from being pitched at a ‘non-cerebral’ level. One of the only pamphlets that he praises in his 1943 survey is H.V. Morton’s I, James Blunt, “a Good flesh-creeper” written in response to “the justified assumption that the mass of the English people haven’t yet heard of Fascism”. Morton’s account of Britain under German occupation was commissioned by the Ministry of Information, and resembles some of the more sensationalistic proscribed texts in both tone and fictional format. (Although the latter’s descriptions of foreign occupation refer to the past and present rather than speculate about a dystopian future.) Its conceit also looks forward to Orwell’s own Nineteen Eighty-Four, whose depiction of totalitarianism responded to Soviet Communism and National Socialism, and emerged from Orwell’s direct experience of “the dirty work of Empire” as a colonial police officer in Burma. Good or bad, read side-by-side and separately, pamphlets in the two collections continue to fill ‘holes’ in understandings of how global war and nationalist foment played out in colony and ‘metropole’. 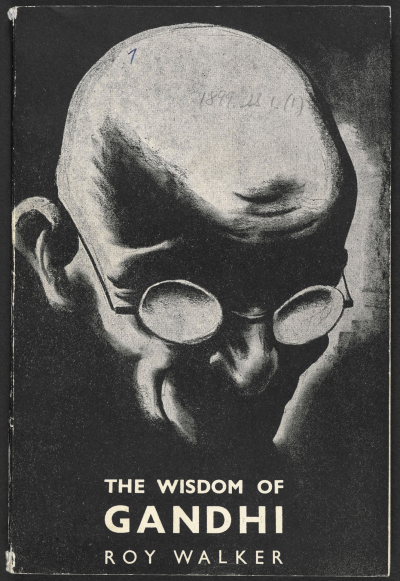 Orwell’s copy of The Wisdom of Gandhi. This collection of Gandhi’s writings has been inscribed by its editor, Roy Walker, “To George Orwell – who seems to need it”. (London: Andrew Dakers Limited, 1943). British Library, 1899.ss.1-21

I am grateful to the Bibliographic Society for a grant to acquire a scan of the Proscribed Publications catalogue, and to Catherine Eagleton and Hamish Todd for giving me access to the collection.

Pragya Dhital has written two previous blogs on this collection for the British Library - Inflammable material (2017) and  Insurgency in the archives (2018) - and edited a special section of History Workshop Journal (2020).

Posted by Annabel Gallop at 1:33 AM