The Burmese Harp: (2) Matters of the Heart

In my previous blog The Burmese Harp: (1) Seduction of the Senses I gave examples of how female harpists were depicted in Burmese manuscript illustrations. In this blog I will discuss stories of male harpists that appear in Jātakas, or tales of the Buddha's former lives, in the British Library's Burmese manuscripts collection. The theme of these stories revolves around longing and heartache.

The Sussondi Jātaka (Or 13538) recounts the story of Sagga, a harpist-minstrel. He is sent by the king of Benares to find the queen who has disappeared. Unbeknownst to the king the queen had in fact fallen in love with the Garuḍa king, who had taken her with him to Nāga Island. 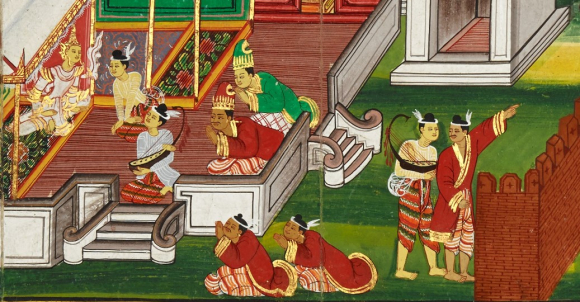 The king sends Sagga, his harpist-minstrel, to search for Sussondi, his queen. British Library, Or 13538, f. 28r

While looking for her Sagga crosses the sea with a ship of merchants who implore him to play his harp. He responds: “I would make music, but if I do, the fish will be so excited that your vessel will be wrecked.” The merchants disbelieve him and insist, and in the end he plays and sings with great beauty. The fish start splashing about and a sea monster who lives in the area leaps up, falls onto the ship and sinks it. Nevertheless, Sagga manages to reach the shore of the Nāga island clutching onto his (boat-shaped) harp. 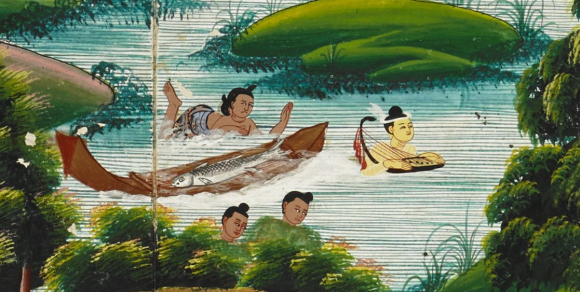 Sagga is shipwrecked by jumping fish, but manages to swim to shore with his harp. British Library, Or 13538, f. 28r

Queen Sussondi, who was strolling on the shore in the absence of the Garuḍa king, finds him. She recognises Sagga and welcomes him with open arms. They become lovers and Sussondi hides him from the Garuḍa king whenever he returns. 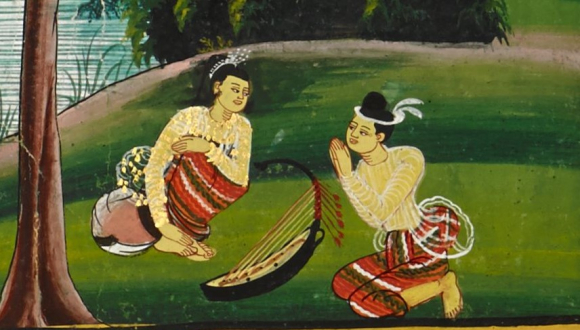 The next time a group of merchants reach the shore, Sagga sails back with them to Benares (this time successfully), where he plays his harp and sings the song of Sussondi, replete with his own longing of her, to the king. 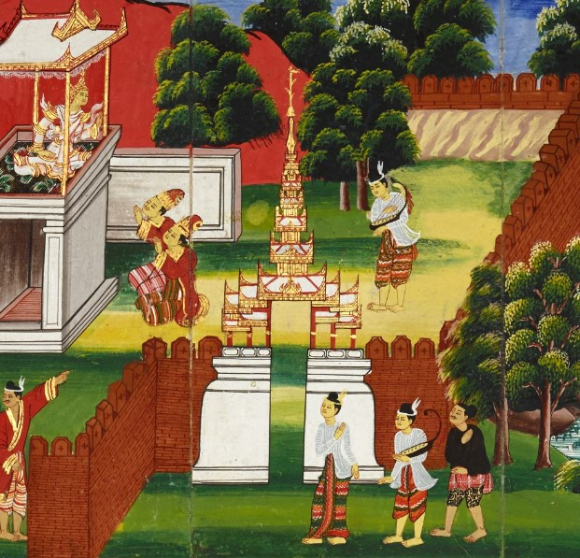 Sagga returns to the palace and sings the story of Sussondi to the king. British Library, Or 13538, f. 28r

The Burmese harp or Saung is a very old instrument that has a continuous history that spans over a thousand years. Many temple reliefs and wall frescoes from Bagan (9th-13th centuries) depict harps, although Judith Becker has suggested these harps may be different from the Sri Ksetra harp (see previous blog), which in turn resembles quite closely the modern Burmese harp. There probably were many different kinds of harps in use at the time. Although the terminology for the harp varies, the word Saung first appears at the Lokatheikpan temple in Bagan (c. 1125), where it describes “monks, who can play the harp”. Indeed, the Saung seems to have an inextricable connection with Buddhism and, according to Becker, the disappearance of the harp accompanied the decline of Buddhism in certain parts of South Asia.

The earliest known songs thought to have been composed for harp music date to the early 14th century (“Three Shield-Dance Songs attributed to the Lord of Myinzaing”). Although song-texts were inscribed on palm leaf there was no musical notation, and so the musical tradition was passed on orally with the music itself being impressed on memory when performed. The oldest harp music that still survives is the “Three Barge Songs”, attributed to Wungyi Padei-tha-yaza (1683-1754), a minister at the Toungoo court. These songs purportedly describe a river voyage from Lake Meiktila to Tagaung.

The Aṇḍabhūta Jātaka (Mss Burmese 202) makes use of the harp for a lighthearted slapstick humour scene. It recounts the story of a Brahmin who has gone to great effort to find and keep a wife who has never seen any other men. Here he plays the harp to her at home for her entertainment. Unbeknownst to him, however, she has taken a lover, and tricks him into being blindfolded through the pretense of her being too shy of him watching her dance. While he is blindfolded in this way, the lover, who is currently staying in the house, hits him on the head and hides. 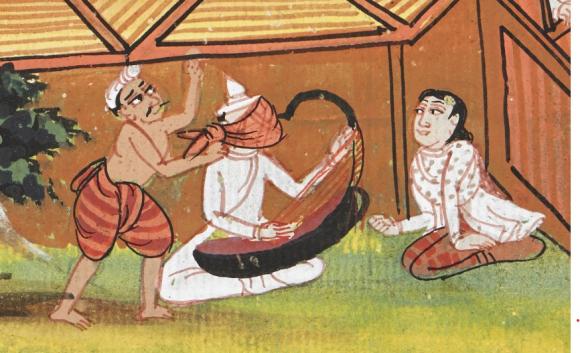 A blindfolded Brahmin plays the harp to his wife, while her lover hits him from behind. Mss Burmese 202, f. 75v

The Dīghītikosala Jātaka (Or 13538) tells the heart-wrenching story of a prince (the Bodhisatta), whose parents are cruelly slain by a deceitful rival. He is devastated, but instead of seeking revenge he goes to stay with the keeper of the red elephant of the palace and leads a simple life. Slowly he recovers from his heartache and when the monsoon rains fall he sings and plays beautiful songs of acceptance and reconciliation with his harp. 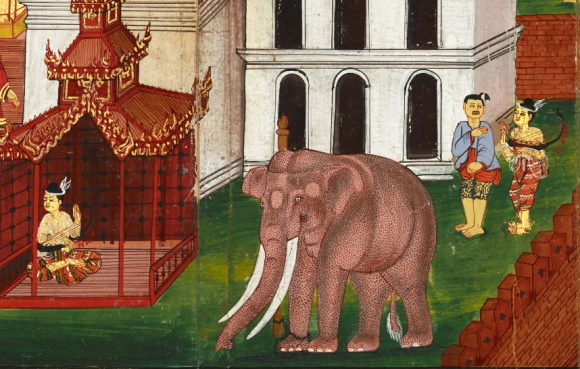 The Bodhisatta goes to stay with the keeper of the red elephant, and recovers from his heartache by playing his harp. British Library, Or 13538, f. 65r

In the next installment of this series of blogs on the Burmese harp, I will talk about the Saung’s relationship with Gautama Buddha.