In February 2020, to coincide with its major exhibition ‘Buddhism’, the British Library hosted a public conference entitled Unlocking Buddhist Written Heritage organised in partnership with the School of Oriental and African Studies and supported by the Robert H N Ho Family Foundation. Over two days, speakers explored the idea of ‘collections’ – be they of manuscripts, texts, art works, or practices – and how they have shaped our understanding of, and indeed the very practice of, Buddhism across the world. In this blogpost, summaries of the event’s papers are given together with links to recordings and slideshows of the papers themselves. The conference provided a wide and rich array of reflections upon Buddhism and what we mean by the very nature of ‘collections’ – and the papers are articulate and entertaining scholarship well worth exploring for all audiences.

Following an introduction by Head of Asian and African Collections Dr Luisa Elena Mengoni, a keynote lecture was delivered by Prof. Dr Birgit Kellner of the Austrian Academy of Sciences. She began by outlining how Indian manuscripts first came into circulation in Tibet during the 8th to 14th centuries in large numbers. The nature of the texts contained in these manuscripts was highly heterogenous: doctrine, philosophy, ritual, narrative and devotional poetry, non-Buddhist Indian epic, grammar. However, unlike in other regions to which Buddhism spread, Sanskrit did not take on the status of a liturgical language, with effort instead poured into using these manuscripts for teaching and translation by a network of translators moving around between and within India and Tibet. Several thousand Indian Buddhist works came to be translated and form the Tibetan canon in this way, and after the 14th century a knowledge of Sanskrit became restricted to those who specialised in the grammatical tradition.

Birgit Kellner Indian manuscripts in the history of Tibetan Buddhism

Kellner went on to look at two case studies in order to better understand how Indian manuscripts were perceived, collected and categorized. She did this by examining accounts of their use in a number of contexts, including the trading of manuscripts as a kind of currency in exchange for teaching; the acquisition and preservation of manuscripts as part of the material legacy of significant personages of a particular lineage within Tibetan Buddhist culture; and, by the 19th and 20th centuries, no longer circulating but treated as sacred objects within monastic collections to be treated as sacred objects and specially stored in libraries and stupas. Through this, Kellner addressed some of the core themes that ran throughout the rest of the conference. 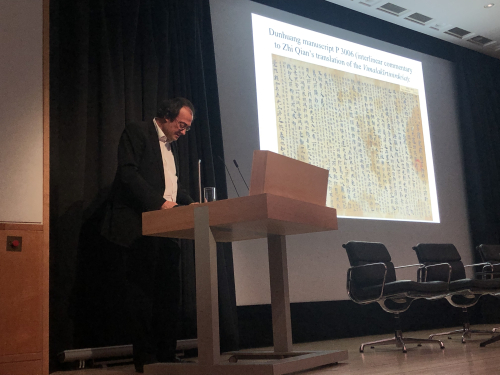 In the first panel – “Collections and Buddhist Practice: Texts and Translation” –  our speakers considered how particular textual collections and their translations shaped the understanding of Buddhism by its practitioners in the past, and how what survives of such collections colours our interpretation of Buddhist history today. In his paper on Early Chinese Buddhist exegetical literature, the late Prof. Stefano Zacchetti, University of Oxford, explored how the early Chinese Buddhist canon was conceived of and transmitted as a collection of translated texts, creating complexities in the production of commentaries so vital to interpreting these Indian doctrines upon their reception in China. Dr Ronit Yoeli-Tlalim of Goldsmiths College London gave a paper on the fascinating subject of Tibetan medicine and in particular the translation of the term rlung or ‘breath’. She looked at the history of translations of the term, and how intersection of different cultural influences from Greek to Indian have shaped interpretations of the concept and Tibetan medicine. Dr Camillo Formigatti, Clay Sanskrit Librarian at the Bodleian Libraries Oxford, examined the translations of Sanskrit texts by the Tibetan lo tsā ba Shong ston Rdo rje rgyal mtshan and Nepalese pandit Laksmīkara, and how their processes played a pivotal role in the formation of a new Tibetan literary language. The panel concluded with a Q&A session chaired by the conference organiser, Matt Kimberley Research Curator at the British Library.

The second panel – “Collections in Monastic Contexts” – explored how manuscript collections in Buddhist monasteries, temples and courts have influenced the development and interpretation of Buddhist practice. Ven. Prof. Mahinda Deegalle of Bath Spa University,  spoke about his research on Sri Lanka’s largest temple library palm-leaf manuscript collection at Hanguranketa Potgul Rajamahā Vihāra. This collection has never been the subject of published work nor its role in shaping the Theravāda tradition considered, so Deegalle presented some initial results of his survey. Following this, Dr Andrew Skilton, University of Oxford, gave a paper on recent efforts to catalogue and digitise Thai temple manuscript collections, and how conditions of preservation, textual canonical status and changes in Buddhist practice itself have pushed once significant texts to the margins where they now risk being lost forever. The final paper of the panel came from Prof. Kate Crosby, and Dr Amal Gunasena, both of of King's College London, which examined a particular group of related meditation practice texts originally composed for Sri Lankan royalty by high ranking members of the monastic community in nineteenth century, now kept in the Hugh Nevill collection at the British Library. She showed how this particular set of practices ceased to be recognised in the modern period, and how as a result this important tradition has been left absent in both Asian and Western scholarship on the subject. The panel ended with a Q&A session chaired by curator Jana Igunma.

The third panel – “Collections and Buddhist Practice: Art and Performance” – considered the way that visual arts and ritual performances in collections provide insight into Buddhist practice. Dr Christian Luczanits, SOAS, gave a talk on monastic collections of manuscripts and artworks in the Mustang region of Nepal. He highlighted the challenges that come with inventorising and documenting these collections and what doing so can do for understanding Buddhism’s development in Nepal. The British Library’s curator of Thai, Lao and Cambodian collections, Jana Igunma, presented a paper on her work investigating the relationship between the historical Buddha and the natural environment. She looked at a range of eighteenth and nineteenth century illustrated manuscripts from South East Asia and how their realistic imagery of the natural world has its roots in much older Pali texts from Sri Lanka. Dr Lucia Dulce, SOAS, presented Tantric ritual practice in medieval Japanese Buddhism through an examination of writings from Japanese temple libraries. In particular, she focused on yugi kanjō, a type of ritual consecration that developed in the medieval period, drawing on unpublished material incorporating liturgy, certificates and visual representations of practitioners and performance spaces. The panel concluded with a Q&A chaired by Sam van Schaik.

In the fourth and final panel – “Collections in the Heritage Context: Conservation, Preservation, Dissemination” – the speakers looked at different aspects of the lives of collections in cultural heritage institutions and how these contemporary settings influence the study and practice of Buddhism today. Dr Jann Ronis of the Buddhist Digital Resource Center presented the work of the Buddhist Digital Resource Center in building the world’s largest online collection of Buddhist literature in Asian languages. Ronis talked about the BDRC’s workflows, data structure and the ambitions for establishing shared standards for Linked Open Data in the field of Buddhist Studies. The British Library’s curator of Chinese collections, Melodié Doumy, and Scroll and Digitisation Conservator for the International Dunhuang Project, Marie Kaladgew, jointly presented on their work for the Lotus Sutra Digitisation Project. By focussing on one particular scroll from this collection, they demonstrated the collaborative decision-making processes that inform conservation practices and the implications these have for the longevity and interpretation of material held in the library. Finally, Dr Sam van Schaik, head of the British Library’s Endangered Archives Programme (EAP), shared his research on the oft overlooked area of Buddhist ‘magic’ using material from both the Stein collections and more contemporary materials preserved by the EAP. Through endeavours like EAP, heritage institutions helped preserve and disseminate at-risk collections the world over by combining local knowledge and understanding of collections with the resources that are typically only available through large public bodies. The panel finished with a Q&A session chaired by Matt Kimberley. 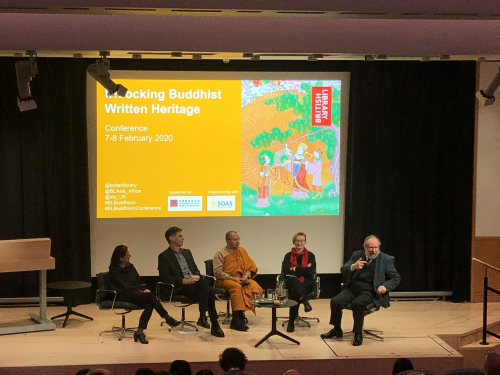 The conference drew to a close with a roundtable discussion on the issues explored throughout the two days, chaired by Prof. Tim Barrett of SOAS with the participation of Prof. Dr. Kellner, Prof. Deegalle, Dr Dolce and Dr van Schaik. This wide-ranging conversation looked at everything from what we mean by the very idea of collections through the challenges that come with the responsibilities of holding collections for the use of current and future generations. In all, Unlocking Buddhist Written Heritage was an important and very successful event for bringing together Buddhism scholars and professionals, Buddhist practitioners and the public to reflect upon the history of this major religious tradition, and for considering the role that institutions like the British Library play in preserving and providing access to its wealth of cultural knowledge and understanding.