Export paintings of Ming and Qing Chinese Interiors and Furnishings

In 2019, Rita dal Martello undertook a PhD placement at the British Library to research a series of paintings created by Chinese artists held in the Visual Art collections. Whilst the primary focus of her placement was a collection of over 300 botanical paintings, Rita also worked on cataloguing a number of artworks that depicted Chinese interiors and furnishings from the Ming and Qing periods. This blog will explore these art works in more detail.

Consisting of 136 paintings (Add Or 2197-2332), this collection contains paintings depicting the interiors of houses and temples, furnishings, including lanterns and displays, and a variety of processional floats used in Buddhist and Taoist religious ceremonies. The objects and interior scenes depicted in these paintings represent the decorative tastes of the educated and wealthy sections of Chinese society during the Ming (1368-1644) and Qing (1644-1911) dynasties.

The paintings are opaque watercolours on European paper, including sheets watermarked 1794 and 1805 which have subsequently been bound into a single volume. Whilst the names of the artists remain unknown, it is likely they were the work of painters working in and around Canton (Guangzhou) who were producing works for the export market during the late 18th and early 19th century. The majority of the collection (Add Or 2197-2313 & 2317-2332) were acquired circa 1806 when they are believed to entered the collections of the East India Company Library and Museum, whilst the remaining three paintings (Add Or 2314-2316) were deposited in 1813. Thematically, the paintings can be divided into three groups: Lanterns, Furniture and decorative displays, and ritual furnishings of official residences and temples.

A total of 35 paintings in the collection depict a variety of lantern designs including palace lanterns of square, hexagonal, or octagonal shape; “flower basket” palace lanterns; beaded lanterns and horse lanterns. Most of the paintings show individual lanterns constructed of elaborate wooden frames and panels decorated with landscape or bird and flower paintings, framed by coloured silk, with some having lavish strings of beads or tassels attached. The majority are depicted hanging from a string in the middle of the page. 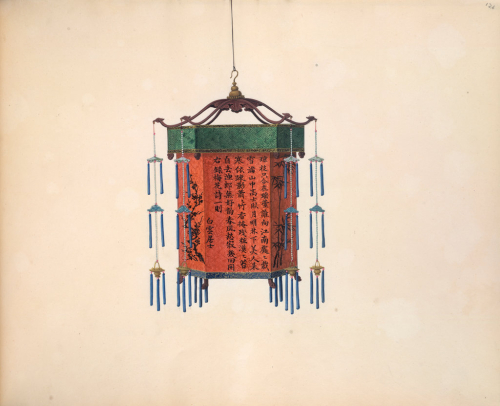 Three paintings bound in this volume are stylistically quite different from the remaining images however (Add Or 2314-2316). In these works the lantern takes up the whole page, and bear front and reverse inscriptions indicating that they were part of a set, possibly coming from the same artist or workshop. This set of paintings were deposited with the East India Company separately from the remainder of the collection and were received as a result of a letter from the East India Company written in March 1812 requesting samples of Chinese lanterns. On 22 February 1813 the Canton Factory replied saying that ‘The Lanterns indented for by the Honourable Court having been reported ready, were this day shipped on the ‘Royal George.’ A description of these Lamps with directions for putting them together drawn up by Mr Bosanquet under whose immediate inspection they were executed will be transmitted, a number in the Packet of that Ships Packet and Captain Gribble has promised that every possible care should be taken of them’ (BL Mss Eur D562/16).

Furniture and decorative displays are the second most numerous group within the album. 33 paintings depict elaborate wooden furniture of various sizes and shapes elegantly displaying objects typically found in the homes of wealthy and educated Chinese. These objects include archaeological bronze objects, musical instruments, dishes decorated with auspicious symbols such as dragons and phoenix, vessels containing auspicious fruits, such as the Buddha’s hand citron for good fortune, or peaches for longevity, as well as vases with flowers such as lotus for purity or roses to symbolise the seasons.

A further 12 paintings depict speckled bamboo tables, chairs, and stools. These are possibly made of Xiangfei bamboo, which grows in Hunan and Guangxi provinces. According to the legend, the speckled aspect of this bamboo is derived from the tears concubines shed the death of the mythological emperor Shun. 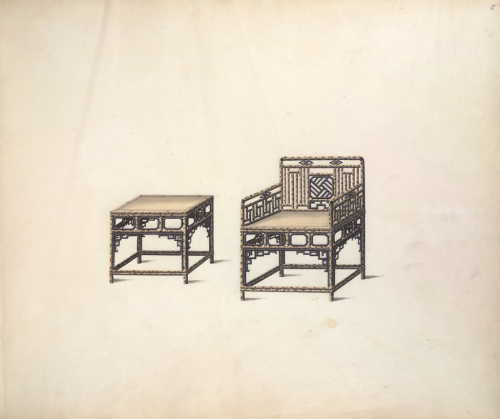 Whilst a small number of paintings in this group also include decorative screens with landscape paintings or calligraphy scrolls, all of the pieces of furniture are painted in the centre of the page with no surrounding background or further details of the surrounding décor or architecture in which they would have been placed.

A final group of paintings in the album and by far the most numerous, depict a range of ritual furnishings including 3 paintings of government offices furnishings, 35 paintings of processional equipment (Add Or 2236) for both government officials and religious ceremonies, including depiction of processional sedan chairs; 17 paintings illustrating Buddhist and Taoist shrines and sacrificial arrangements and 1 of a liturgical archway celebrating filial piety. 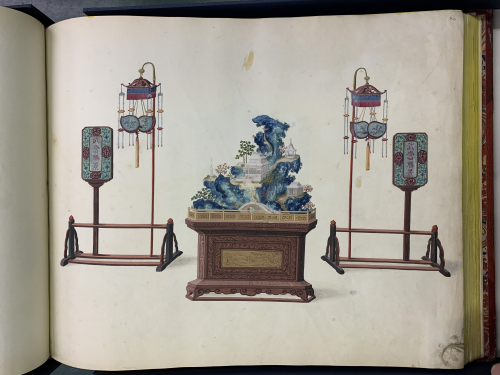 Processional model of the Daoist temples of Wudang Mountain, in Hebei province, showing various buildings (pavilions, pagodas, etc) on a miniature mountain. At either side, a pair of matching wooden stands with a lantern and a plaque saying "Spectacular Scenery of Wudang Mountain" (武當勝景). Unnamed Chinese artist, c. 1800-1806. British Library, Add Or 2236.

These paintings once again show the furnishings, shrines and ceremonial emblems in the centre of the page with no background or contextual details. The paintings are not accompanied by descriptive inscriptions or titles and one of the key areas of my work on this collection was to create catalogue records for the individual paintings, researching and describing the subjects of each painting and transcribing any inscriptions found on the objects depicted.

The individual records of these paintings can be found on the British Library's Explore Archives and Manuscripts catalogue, by searching for the specific references of the collection (Add Or 2187-2332).

Reproduction of these paintings and further information can be found in: