The current British Library exhibition, Unfinished Business: The Fight for Women's Rights (until at least 21 February 2021) explores how feminist activism in the UK has its roots in the complex history of women’s rights. This two-part blog post presents four female writers from Laos, all of whom have had to overcome traditional societal barriers to achieve recognition.

Although women have always played a major role as supporters of Buddhism, the main faith in Laos, and as musical performers and storytellers (mor lam) in traditional Lao society, they were not encouraged to actively write literary or Buddhist texts. While exceptions may have existed, female writers in Laos only began to emerge and to be respected for their work in the second half of the twentieth century. Their works have helped to shape contemporary Lao literature, and they have contributed significantly to women's rights and gender equality in Laos. This two-part blog post introduces the lives and works of four contemporary female Lao authors who are now celebrated nationally and internationally, starting with the sisters Dara Viravong Kanlagna and Douangdeuane Bounyavong. 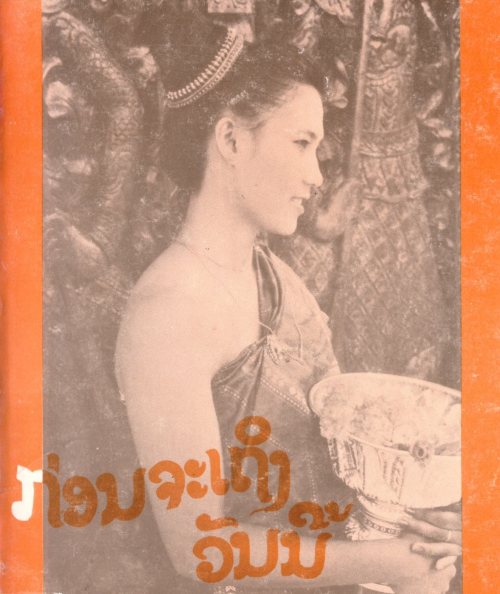 Douangchampa (Lao for "Plumeria flower", the national flower of Laos) is the pseudonym of Dara Viravong Kanlagna, a Lao National Artist who has authored some sixty short stories, ninety poems, seven novels, and a screenplay for a popular feature film entitled Boua Deng which was screened at the International Festival of Cinemas of Asia in 1988. A selection of her works is held in the British Library.

Born in 1940 in Ban Oupmoung, Vientiane, as the daughter of the well-known Lao historian and philologist Maha Sila Viravong, Dara Kanlagna has been interested in literature since early childhood. She started her career as a schoolteacher in 1958 and began to write around the same time. Few years later she became an editor at Phainam Magazine, and she also began to translate literature books. After the revolution in 1975, Dara Kanlagna worked at the Ministry of Culture as a translator, editor and writer. In 1979 she established Vannasin (British Library ORB.30/6666), a literary magazine, together with other leading Lao writers. Much of her time was dedicated to working with the Preservation of Lao Manuscripts Programme that ran from 1988 to 1994 with support from the Toyota Foundation, and from 1992 to 2004 with support from the German government. Subsequently this programme led to the establishment of the Digital Library of Lao Manuscripts which today makes images of over 12,000 manuscript texts from across Laos accessible online. In 1996 Dara Kanlagna was awarded the Nikkei Asia Prize for Culture and Community for her passionate work with the manuscripts project. 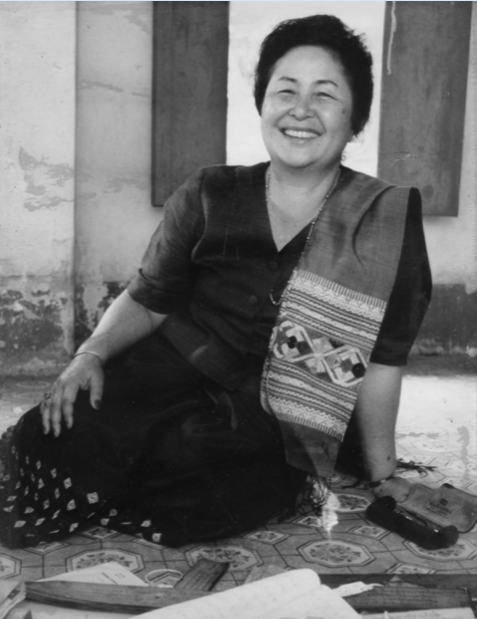 After her retirement in 2001 she continued to write, focusing on issues which occur in society. Her themes include the role of women in society and education, the struggles and obstacles that Lao women face, and inequalities which are often a result of ancient traditions and poverty. To raise awareness about the tradition of weaving and the fact that textile production is an important industry run and led by women in Laos, Dara Kanlagna teamed up with members of the Group for Promotion of Art and Lao Textiles, all experienced female weavers, to record their personal stories and research into practices and techniques of weaving and dyeing not only of the Lao, but also of ethnic minority groups. The project resulted in the book Pha phae ni mi tamnan / Legends in the Weaving, published with the support of the Japan Foundation Asia Center (Vientiane, 2001). 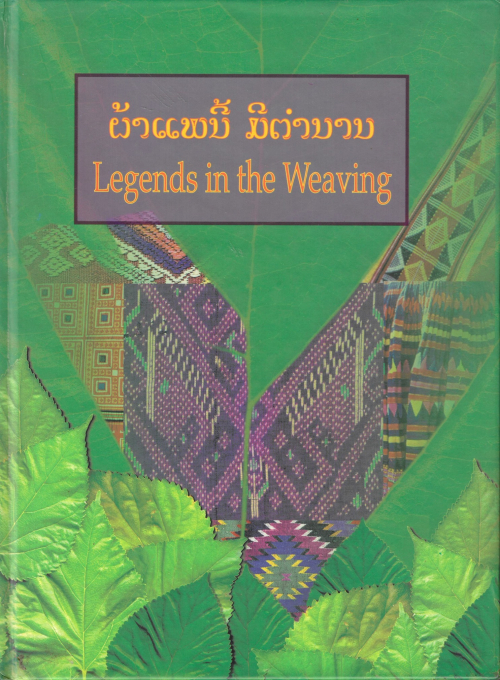 For her collection of poems with the title Hak dok... chung bok ma (Vientiane, 2005) Dara Kanlagna received the Southeast Asia Write Award in 2010. She explained that she wrote the poems in honour of her mother, who raised her and her thirteen siblings with great patience and determination amid hardship and poverty and provided them with a good education despite being illiterate herself. 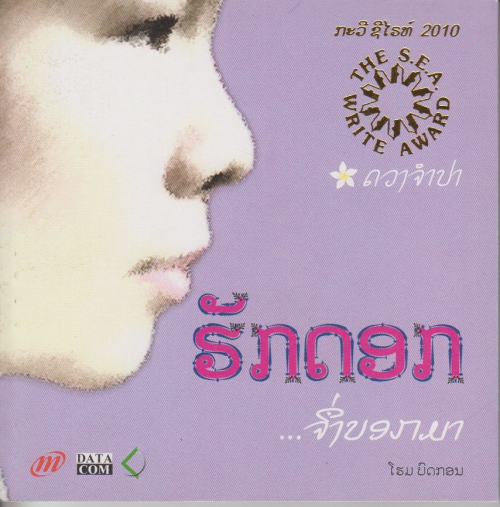 Douangdeuane Bounyavong, born in 1947 in Vientiane, is also known under her penname Dokked. Like Dara Kanlagna she grew up with a love of books and literature: she is another daughter of the historian Maha Sila Viravong and his wife Maly. After attending Dong Dok Teachers’ Training College in Vientiane from 1964 to 1968, she went on to study Physics and Chemistry at the University of Amiens and the University of Poitiers, France, where she graduated with a Master’s degree in 1974. She began to write while she was still a student in 1966. Her late husband, Outhine Bounyavong, was one of Laos' leading writers, and together they worked on various publications like Lao language textbooks, dictionaries, juvenile books and literary epics of national significance like Thao Hung Thao Chueang (British Library YP.2006.b.575) and Sang Sinxay. 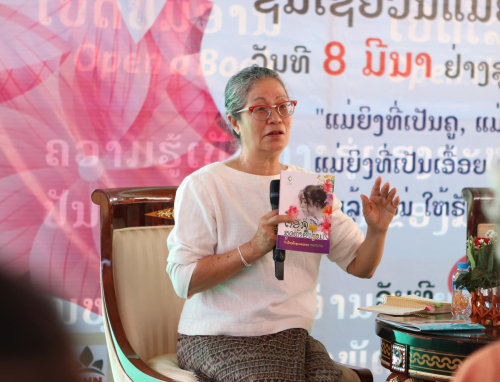 While running a small publishing company named Dokked that specialized in juvenile and women's literature, Douangdeuane Bounyavong wrote eight novels, about forty short stories and over sixty poems, some of which are held in the British Library collections. Following in the footsteps of her father, she transcribed numerous folk tales and works of classical literature from old into modern Lao to make them accessible to younger generations. Her groundbreaking research on the national epic Thao Hung Thao Chuang (Vientiane, 1991, British Library YP.2013.a.2225) was re-published in Thailand in 1997 (British Library YP.2016.a.9036).

In addition to writing poetry and prose she also carried out research on Lao weaving traditions, which resulted in three books on textiles including a comprehensive study of the textile collection at Ho Moune Thaentaeng Heritage Preservation Center in Vientiane with the title Lai tam kap kon / Weaving poems: Lao textiles (Vientiane, 2015). As co-founder of the Group for the Promotion of Art and Lao Textiles (1990) Douangdeuane Bounyavong was actively involved in projects for the preservation of traditional Lao textile techniques, and initiatives to raise awareness and to improve the social status of weavers and women in general, and to promote handwoven Lao textiles abroad. Currently she is Managing Director of the "Land of Bamboo Textile Museum and Medicinal Herbs and Plants Garden" as well as editor-in-chief at Dokked Publishing House. She was awarded the Arts and Culture Prize of the Fukuoka Asian Culture Prizes in 2005 and was also a recipient of the prestigious Southeast Asia Write Award in 2006 for her novel The Charm of the Forest (Vientiane, 2005). 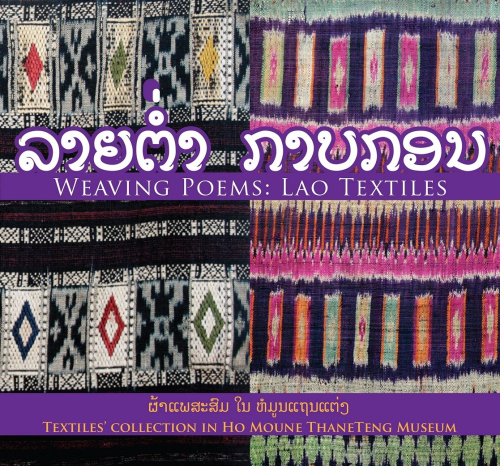 Among Douangdeuane Bounyavong's best-known books is her mother's narrative biography with the title When Mother was in Prison, published in 2004. The story of the girl Maly, who never had the chance to attend school and was bullied because of her mixed Lao-French heritage, is truly touching as she becomes a confident and intelligent young woman who, aged seventeen, divorces an obsessively controlling husband - something unthinkable in traditional Lao society. In 1939 she married Maha Sila Viravong, with whom she had fourteen children (in addition to a son from her first marriage). When her husband, a member of the anti-colonial liberation movement Lao Issara, had to flee to Thailand in 1940, her utmost priority was to protect her children through the precarious and violent time of WWII and later the Vietnam War, and to give them the best educational opportunities possible. The book encourages women to stand up for their personal rights and to not give in to coercive control, authoritarian behaviour and male violence. 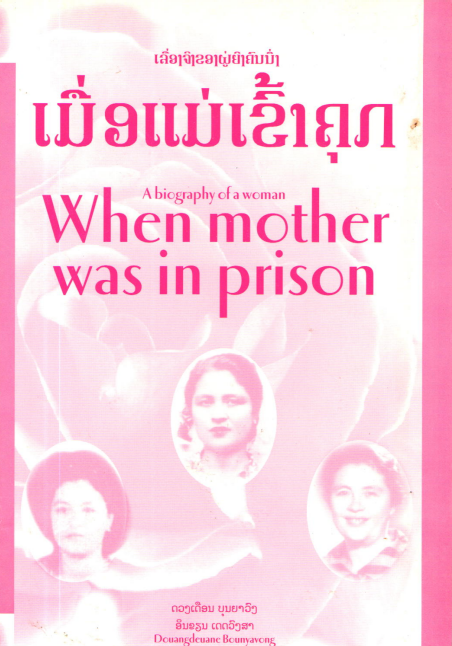 In the next installment of this blog post, I will introduce two more inspiring Lao writers: Kongdeuane Nettavong and Phiulavanh Luangvanna.