The current British Library exhibition, Unfinished Business: The Fight for Women's Rights (until at least 21 February 2021) explores how feminist activism in the UK has its roots in the complex history of women’s rights. This two-part blog post presents four female writers in Laos, all of whom have had to overcome traditional societal barriers to achieve recognition. The previous installment discussed the sisters Dara Viravong Kanlagna and Douangdeuane Bounyavong; this post focusses on Kongdeuane Nettavong and Phiulavanh Luangvanna.

Kongdeuane Nettavong, born in 1947 in Xieng Khouang, northern Laos, is a well-known Lao writer, storyteller, researcher and musician. After fleeing the Vietnam War that was devastating Xieng Khouang and other parts of Laos, and finishing secondary school in Vientiane in 1967, she went on to study at Laval University in Quebec for her Bachelor's degree in Geography in 1970. She continued her studies in Paris and graduated with a Master's degree in Archival Studies in 1974. After her return to Laos she taught geography and history at the Teachers Training College in Vientiane. In 1976 she was appointed Deputy Director of the National Library Museum and Archeology Department. With great dedication she initiated a literacy program by setting up public and school libraries, organising "book boxes" (book donations for rural libraries), and by publishing textbooks and books for juvenile and beginner readers with the aim of promoting reading. 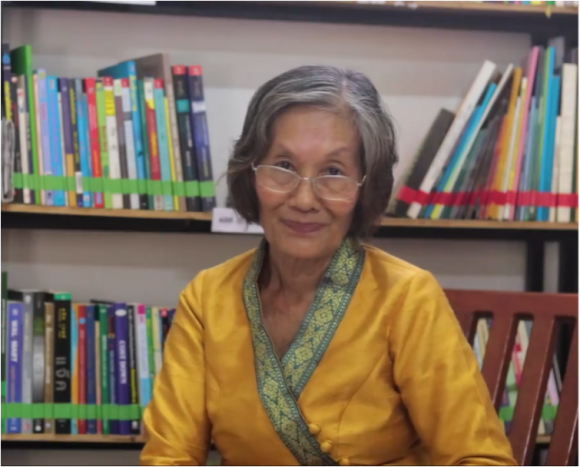 Kongdeuane Nettavong giving an online talk on the role of teachers in society, September 2020. Image courtesy of Lao Economic Daily.

From 1989 until 2010 she was Director of the National Library of Laos where she was involved in the Preservation of Lao Manuscripts Programme and the creation of the Digital Library of Lao Manuscripts. A major international event which Kongdeuane Nettavong organised in 2004 in the context of the Preservation of Lao Manuscripts Programme was a Conference on the Literary Heritage of Laos, which presented the research of over thirty scholars from seven countries and resulted in the publication of a conference book, a major source for the study of Lao literature and manuscripts until today. 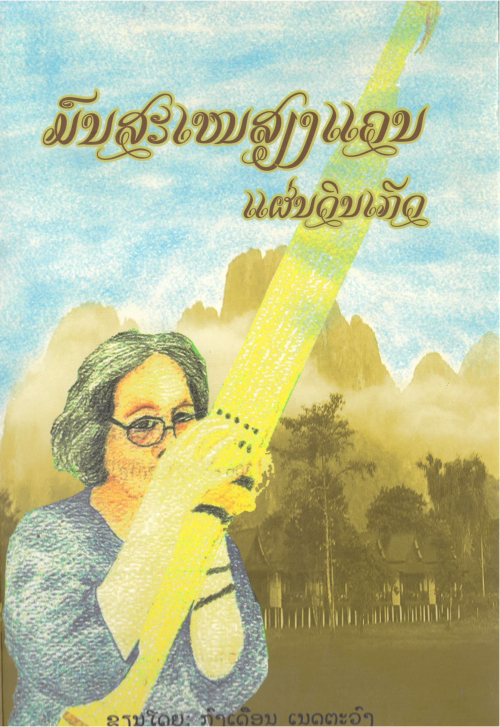 Among Kongdeuane Nettavong's many achievements is the establishment of the Archives of Traditional Music in Laos (ATML) project, which records sound and preserves audiovisual documents of the ethnic groups in Laos. The project also trains local staff to continue the culturally vital task of documenting and preserving traditional music and encourages the training of the younger generations in traditional music. A passionate player of the Lao mouth organ Khaen, she is president of the Khaen Club where young people can learn to play this unique instrument. She contributed to the inscription of Khaen music on the UNESCO Representative List of the Intangible Cultural Heritage of Humanity.

In addition to her musical ambitions Kongdeuane Nettavong is well-known as a professional storyteller, who co-authored the book Lao folktales (Westport, 2008; British Library YK.2008.b.4839) together with Wajuppa Tossa, an eminent Lao-speaking storyteller from northeast Thailand. They see storytelling as a powerful means to preserve and revitalize local cultural heritage by engaging and interacting with audiences of all ages and diverse backgrounds. 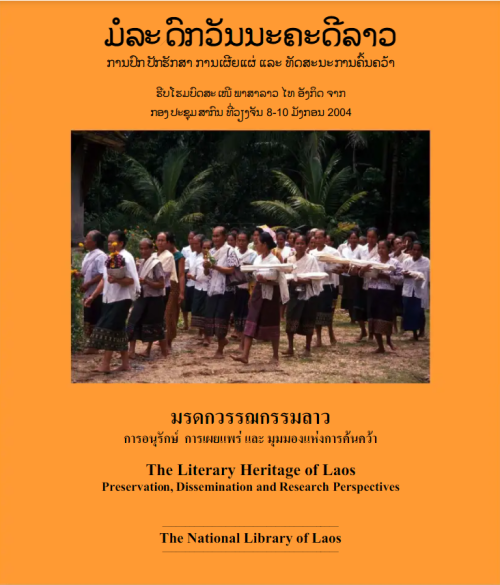 As an educator whose aim is to transform knowledge into social progress it comes as no surprise that Kongdeuane Nettavong stars in an educational short film about an elderly school teacher. Mae Phim, who, though grieving the recent loss of her husband, cannot bring herself to retire from teaching when so much work is still to be done to educate the younger generations. Metaphorically, her daughter calls her Mae Phim Khong Sat at the end of the film, meaning "printing matrix of the nation".

Phiulavanh Luangvanna, born in 1954 in Muang Khoun, Xieng Khouang, writes under the pen-names Thidachan and Phiulavanh. She has authored 98 short stories published in five volumes, including the popular book Duan lap lae (Vientiane, 1996; British Library YP.2011.a.3749); 69 poems in three volumes; two plays; and six volumes of stories and tales for children; as well as dozens of research level articles on Lao literature, culture and art published in Lao and international journals like Vannasin (British Library ORB.30/6666) and Tai Culture (British Library WZOR.2002.a.5). She also translated several short stories, novels and poetry from Vietnamese and Thai into the Lao language. 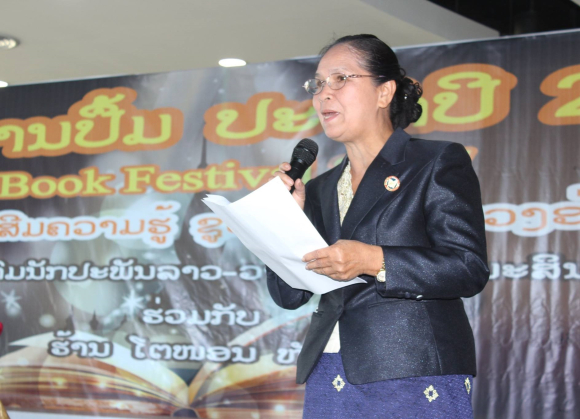 Phiulavanh Luangvanna giving a speech at the Book Festival 2017 in Vientiane. Photograph courtesy of Soubanh Luangrath.

While growing up during the Vietnam War when Xieng Khouang was the target of heavy bombing  Phiulavanh Luangvanna witnessed not only the atrocities caused by this war in general, but also the suffering and agony that especially girls and women endured when they lost parents, siblings, husbands and children. Her school education was disrupted by the daily shelling, and schools had to be moved into the jungle and caves. In 1970-71 many people from Xieng Khouang fled to North Vietnam. Phiulavanh Luangvanna trained and worked as a schoolteacher for Lao refugees near Hanoi from 1971-75. After liberation in December 1975, she moved to Vientiane and started work at a teacher training school, and from 1982-84 she studied for a Bachelor’s degree in Lao language and literature at the National Teachers Training College in Dong Dok (since 1996 the National University of Laos). There she worked for thirteen years as a lecturer for Lao language and literature teaching Lao and foreign students. In 1997 she went on to work with the Lao Women's Union as general editor of their magazine and as a radio/TV broadcaster for women's programmes. 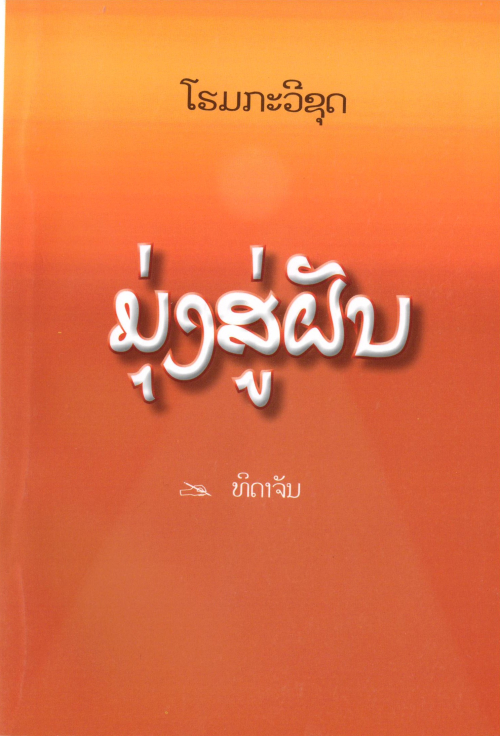 Since 2014, though officially retired, Phiulavanh Luangvanna has been active in the Lao Writer's Association where she provides support to young and female writers. For her work she received the Mekong Literary Prize in 2007, and in 2010 she was given the title Lao National Artist. She was also awarded the Southeast Asia Write Award in 2019 for her novel Thaenkham Salaphap / The Confession.

This is the story of an American veteran returning to Laos twenty years after the Vietnam War, driven by the memories of a young Lao woman he had fallen in love with during the war, when he was injured and captured and looked after by Lao youths. It is a gripping historical novel of love and sacrifice, pride and remorse; a tribute to the young Lao women and girls who supported those fighting at the frontline, and those who lost their loved ones and their lives. It is also an insightful study of the human psyche after the war, on both sides, Lao and American, and she explores ways of forgiveness, healing and reconciliation. 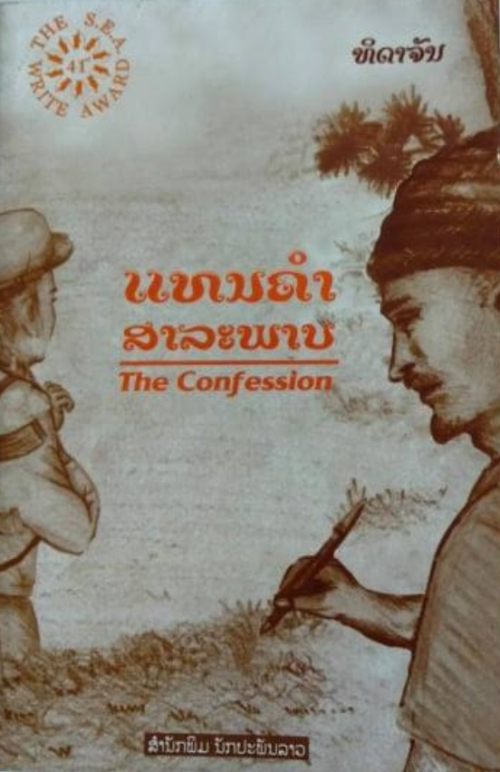 The message that these inspiring Lao writers have in common is that women play a crucial role not only in education and the economy, but also as drivers of cultural progress and as sound decision makers, especially in difficult situations like war and in periods of extreme poverty. Like many of their colleagues in Laos, they emphasize that literature, storytelling, film and music are powerful means to influence mainstream conversations and challenge social stereotypes.