The Gombroon Diaries: a Rich Source on Eighteenth Century Persia and the Persian Gulf

The Gombroon (Bandar-e ʻAbbas) Factory was established in 1623 to represent the interests of the East India Company (EIC) on the southern coast of Persia (Iran) and the Gulf. It soon became the centre of British trade and political activities following the expulsion of the Portuguese from Hormuz and Bahrain. A Chief Agent headed the Factory’s decision-making ‘Council’. The Council members coordinated with Sub-Agents, Brokers and local partners at the rest of the British establishments in Persia, primarily in Esfahan, Kerman and Shiraz. 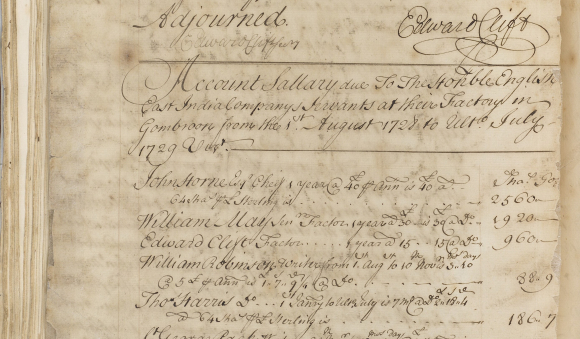 In many ways, the Factory owed its existence and commerce in the region to certain royal grants confirming specific trading privileges known as Rogums (Ruqum or Raqams). These were granted to the British by the King (Shah) of Persia, and were renewed regularly. The daily consultations at the Gombroon Factory were recorded in diaries. Each diary usually covered a one year period. Copies of the diaries were dispatched by sail to the Company’s administrative headquarters in the Bombay Presidency. The surviving thirty-two diaries are an open gate to the social, political and economic history of eighteenth-century Persia and the Persian Gulf. These diaries are bound within thirteen individual volumes that are classified under the India Office Records’ (IOR) sub-series IOR/G/29/2-14. These are dated from November 1708 to February 1763. Any lacuna within these two dates would indicate that the diary either did not exist in the first place or was lost, misplaced, or removed from the records at some point. Most of the volumes include one diary each, apart from volumes IOR/G/29/5, 6, and 7 which contain nine, seven and six diaries respectively.

The Gombroon diaries record the day-to-day consultations that took place at the Factory. These cover the administrative decisions made, letters sent and received, visits to and from the Factory, trading activities, inland and offshore military operations, in addition to miscellaneous reports of other political and commercial events taking place in the region.

Apart from their administrative nature, the diaries stand out as an extensive and under-utilised source for the study of commercial activities in eighteenth century Persia and the Gulf. These can be glimpsed through the records they preserve of the activities of the British, Dutch and French trading companies, as well as local Persian and Arab merchants in the region. Such records help trace the history of foreign powers’ interest in the region, as well as encounters with and among local authorities.

The Persian fleet sailing to Khorfakkan to assist the Imam against his rebellious subjects (IOR/G/29/5/9 f 375v).

The records of commercial activities also reveal some remarkable information about the movement of ships and the busy ports at the time. Examples of the names of ships that appear regularly in the records are: the Success, the Prince George, the Prince Edward, the Fayz Rabbani, the Phoenix, and the Swallow. Among the many ports the ships sailed to and from are: Bandar-e ʻAbbas, Bombay, Basra, Bandar-e Rig, Surat, Bandar-e Charak, Mocha, Muscat and Bushehr.

The commercial aspect is also preserved in the records of traded commodities, mainly woollen goods, rice, rose water, grain, sugar, copper, spices, and coffee, in addition to the names of Persian currencies used at the time and their exchange rates in Indian rupees.

The highlights of the diaries, however, are the records they contain of the state of affairs and the never-ending inland and offshore military operations. These introduce the readers to the names of prominent military generals, regional governors and influential tribes involved in such operations. These include but are not limited to: Shah Tahmasp II, Nadir Shah Afshar, Ahmad Shah Afghan Dorrani, Shahrokh Mirza Afshar, Karim Khan Zand, Azad Khan Ghilzaʼi, Nasir Khan Al Mazkur, Shaikh Hatim bin Jubarah al-Nasuri, Shaikhs Rashid and Rahmah al-Qasimi and the tribes of Jubarah, the Banu Muʻin, the Al-ʻAli, and the Arabs of Julfar.

Indeed, a large number of towns and provinces are also mentioned in the diaries as part of the accounts of the military operations. These include Bandar-e 'Abbas, Esfahan, Qazvin, Yazd, Tabriz, Khorasan, Mashhad, Mazandaran, Shiraz, and Qishm Island. 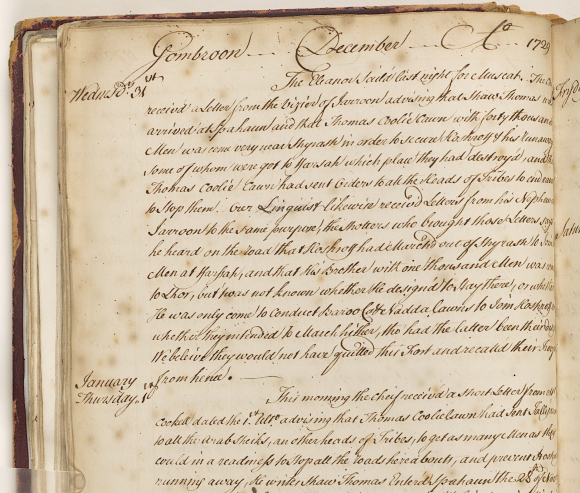 In addition to the above, the diaries preserve some occasional, yet fascinating records of weddings, deaths, celebrations, personal disputes, etc. An example of these is the news of Shahrokh Mirza Afshar’s wedding and the choice of presents for the occasion.

Another interesting example is a letter sent by the EIC to Sultan Muhammad Mirza, a claimant to the throne following the Afghan invasion of Persia, in which we learn that the prince had threatened to expel the Company from the Gulf to protect his friend Shaikh Rashid al-Qasimi of Basidu. The company was therefore pleading with Sultan Muhammad Mirza not to attack them, and promising to lift their unilateral blockade against Shaikh Rashid. Additional details about this letter and its historical context will be provided by my colleague Dr. Kurosh Meshkat in a separate forthcoming blog.

With the variety of topics they cover, the Gombroon diaries stand out as primary source material on the commercial, political and military history of the region. The way in which these diaries are organised makes it difficult to search for a particular piece of information within them. In fact, it may be necessary to read a volume from cover to cover in order to spot the name of a certain person, ship, a place or an event. Nevertheless, thanks to the ongoing British Library-Qatar Foundation Partnership (BLQFP), these fascinating diaries and many other materials are now being catalogued, digitised, and made available on the Qatar Digital Library. Making such materials available allows those interested in the history of the region to easily browse the diaries, and appreciate and make use of the abundance and variety of their content spanning most of the eighteenth century.