Highlights from the British Library’s Collection of Ethiopian Manuscripts 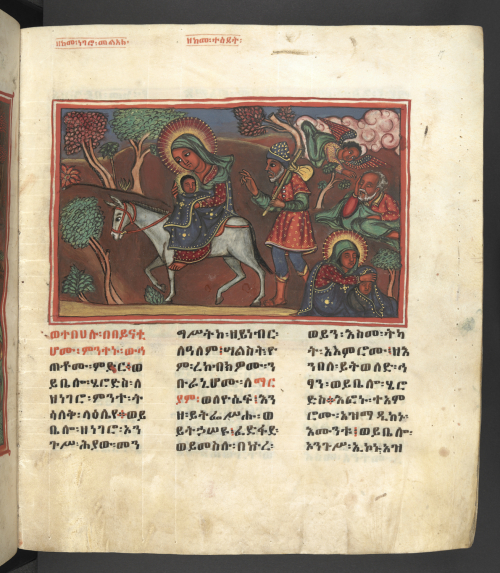 The Nativity of Jesus from an apocryphal text first written in Coptic in the 5th century. The full text only exists in the Ethiopian version. This 18th-century MS has 265 illustrations and was written for King Iyasu. The Holy Family is often depicted fleeing the persecution of Herod. (ነገር ማርያም [Nagara Māryām / History of Mary], Ethiopia, 18th century. Or 607, f 17r)

Travelers, missionaries and military officials active within Ethiopia enabled western collectors to continually acquire manuscripts from the region since the fifteenth century. The exact number of such manuscripts housed within collections outside of Ethiopia cannot be determined. Nevertheless, many were acquired by European Cultural Institutions via donation, bequest, official transfer and commercial purchase. The three most significant of these bodies are the Biblioteca Apostolica Vaticana in Rome, the Bibliothèque Nationale de France in Paris and the British Library in London possessing a combined holding of two thousand seven hundred Ethiopian manuscripts. 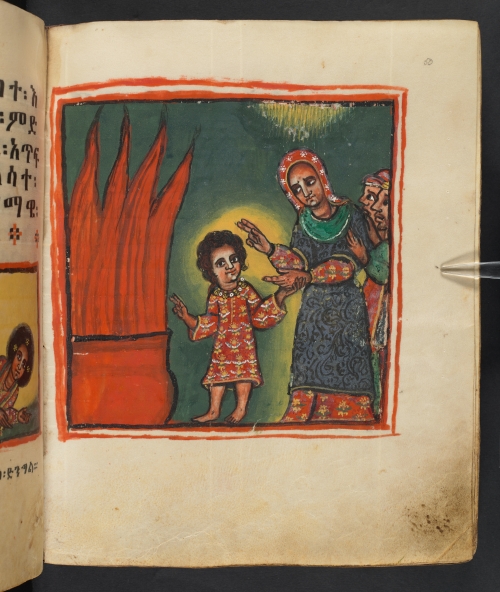 Illustration of one of the most venerated martyrs in the Ethiopian Church, the child St. Kirkos & his mother St. Iyalota. (ገደለ፡ ቅዱስ፡ ቂርቆስ [The Acts and Miracles of Cyricus], Ethiopia, 18th century. Or 720, f 50r)

In its entirety, the British Library’s Ethiopian Manuscript Collection covers all aspects of Ethiopian literature. Biblical and apocryphal literature, service books, prayers, music, poetry, theology, lives of saints and exegesis (commentaries) are well represented. There is also a rich diversity of secular works covering mathematics, science, grammars, vocabularies, astrology, magic, poetry, divination and medical texts. Official material taken from Ethiopia’s Royal archives can also be found. It also includes one of the most significant illuminated collections outside of Ethiopia, totalling one hundred and twenty individual manuscripts created between the fifteenth and early twentieth centuries. More than ninety of these are lavishly illuminated containing up to a hundred separate illustrations. 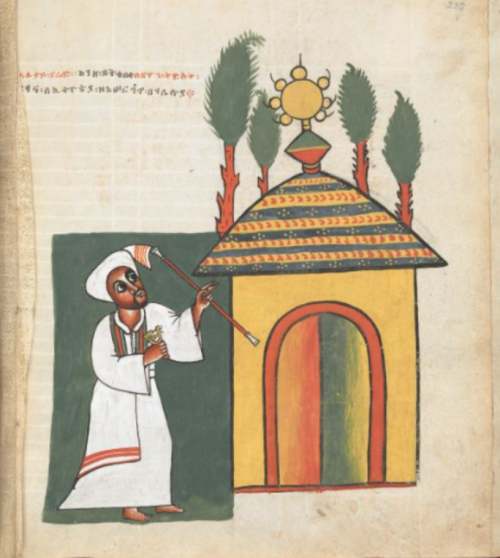 The first donation of Ethiopian manuscripts housed in the British Library was made by the Church of England Missionary Society which included seventy-four codices acquired by missionaries during the 1830s and 1840s. The largest was made in 1868, following the official transfer of three hundred and forty-nine manuscripts taken from Emperor Theodore’s capital at Maqdala by a British punitive expedition the previous year. The British Library’s Ethiopian Manuscript Collections are therefore culturally and historically significant. 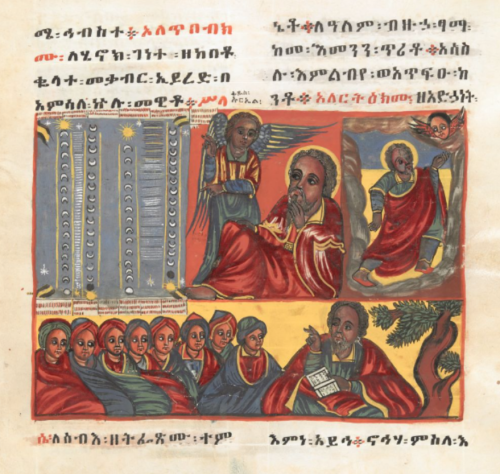 The movement of heavenly bodies and of the firmament, revealed to Enoch in his trips to Heaven guided by the angel Uriel. (መጽሐፈ መድበል [Mestira Zaman], Ethiopia, 1721-30. Or 790, f 9r)

In 2016, the British Library launched its Heritage Made Digital Programme to digitise collections of particular national and international cultural significance in addition to fragile objects deemed unsuitable for physical use. The Programme’s long-term objective is to make this material available for global research and consultation via a single online platform. Given the significance of Ethiopian Manuscript Collections, the Maqdala Collection was one of the first to be selected for digitisation by the Heritage Made Digital Programme. 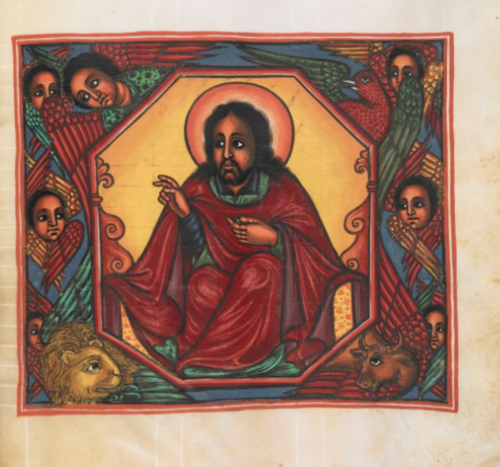 The Four Living Creatures - the lion, the ox, man, and the eagle - are venerated in the Ethiopian Church and considered to be nearer to God than all other celestial beings. (አብቀለምሲስ [The Revelation of St. John], Ethiopia, 1700-1730. Or 533, f 30r)

This work not only provided an important opportunity to increase awareness about this collection leading up to the 150th Anniversary of the Battle of Maqdala in 2018, it also enhanced our knowledge of the collection’s holdings leading to the discovery of several little-known illuminated manuscripts covering biblical, hagiographical and apocryphal themes. Currently, over fifty thousand pages from the library’s remarkable collection of Ethiopian manuscripts are now freely available online for researchers and the general public. 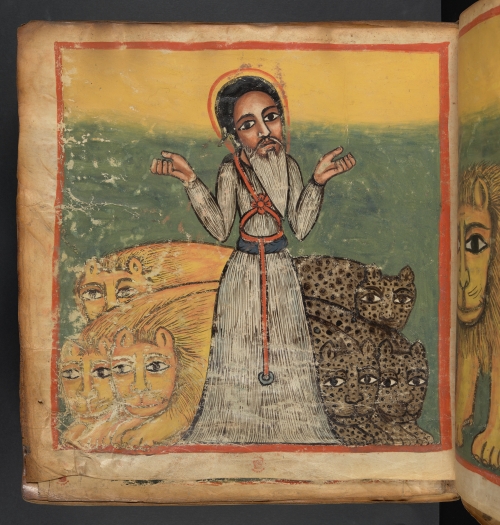 St Gebre Menfes Kidus an Egyptian hermit, the founder of the 14th-century monastery of Zuqualla, in an extinct volcano mountain in Ethiopia. (ተአምረ ማርያም [Miracles of Mary], Ethiopia, 17th century. Or 639, f 174v)

Users can find all relevant digitised manuscripts through the Digitised Manuscripts platform, www.bl.uk/manuscripts, by searching in the keyword(s) search box for the word "Ethiopian". 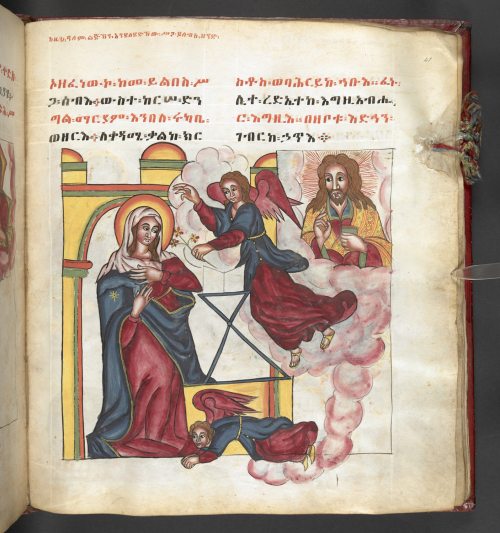 The Nativity of Jesus, from an 18th-century hymnological composition. (ጥበበ ጠቢባን [Wisest among the Wise], Ethiopia, 18th century. Or 590, f 41r)