I have recently been writing on the British Library’s collection of eight Qur’an manuscripts from Southeast Asia, which have all been digitised. These eight manuscripts represent three regional traditions in the Malay world, with one fine Qu r’an from Patani on the East Coast of the Malay peninsula, three from Aceh and four from Java. However, many more Qur’an manuscripts, mostly still held in private collections in Southeast Asia, are available digitally on the British Library website through the Endangered Archives Programme (EAP). Some of these Qur’ans are in poor condition, with losses of text, but are nonetheless of great interest in representing certain manuscript traditions not otherwise easily accessible in public collections or publications. 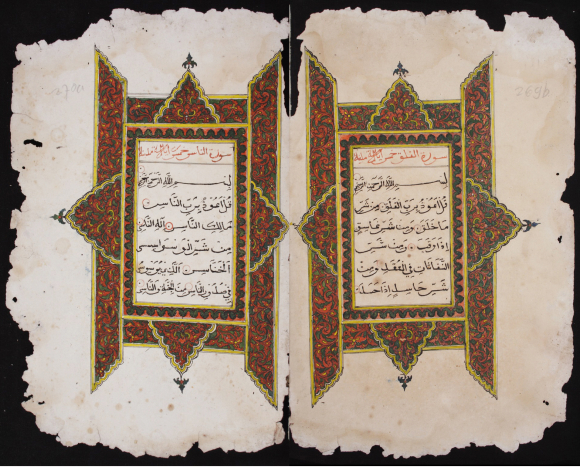 To date, around 30 Qur’an manuscripts (or surviving parts) have been digitised through five EAP projects in Indonesia. There is one Qur’an from a madrasah (pesantren) in East Java (EAP061), two from Cirebon (EAP211) on the north coast of Java, and one from Buton (EAP212) off the southeast coast of Sulawesi. Larger numbers have been digitised in Sumatra, with six in Kerinci (EAP117) in the highlands of Jambi, 12 in West Sumatra (EAP144) and eight from Kampar (EAP1020) in Riau. In many cases it can be presumed that the Qur’an manuscripts were copied in locations local to where they are still held today, but a few may have been brought from elsewhere. An important contextual factor which helps to paint a fuller picture of reading and writing cultures is that some projects, such as that in Kerinci, have also documented large numbers of printed Qur’ans, many recognizable as lithographed copies published in Bombay in the second half of the 19th century, which were widely distributed thoughout Southeast Asia. 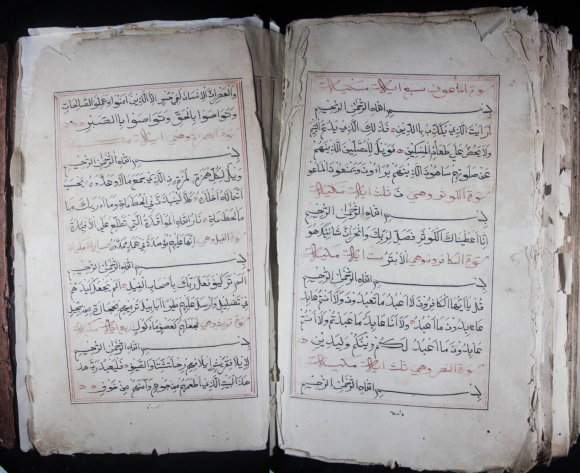 One of the most recent EAP projects in Indonesia – EAP1020, collections in Kampar, Riau – has digitised a number of significant Qur’an manuscripts. The finest, EAP1020/5/2, has a beautifully illuminated frame in red, green and gold surrounding the beginning of the second chapter of the Qur’an, Surat al-Baqarah. Sadly, like many other Qur’ans digitised through EAP, this manuscript has lost its initial folio, which would have contained the first chapter of the Qur’an, Surat al-Fatihah, set within a similar illuminated frame. 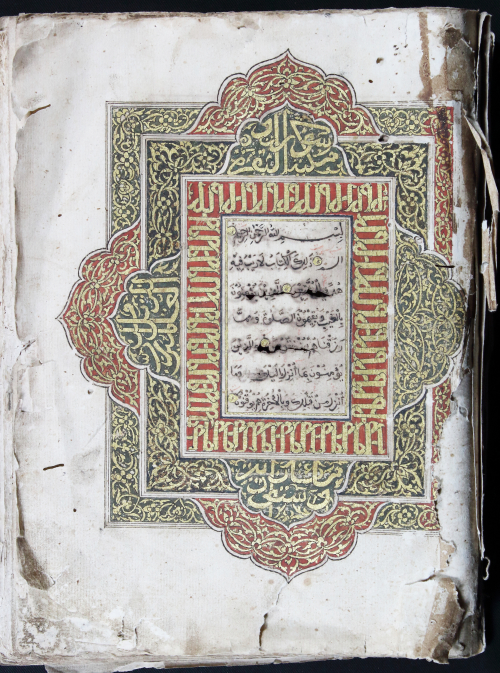 Illuminated frame around the beginning of Surat al-Baqarah; the first surviving page of a Qur’an manuscript in Air Tiris, Kampar, 18th or 19th century. EAP1020/5/1, p. 1

Another important Qur’an from Kampar, EAP1020/3/2, is actually a fragment consisting of only six folios. These 12 pages contain verses from the first two chapters of the Qur’an, Surat al-Baqarah and Surat Al 'Imran (pp.1-2 Q.2:278-283; [missing 1 folio]; pp.3-10 Q.3:7-49; [missing 1 folio]; pp.11-12 Q.3:61-73). This manuscript is immediately recognizable as a ‘Sulawesi diaspora’ style Qur’an, belonging to a distinctive school of Qur’anic manuscript art produced in locations all over the Malay archipelago associated with Bugis diaspora communities. However, no other examples of this school have so far been digitised, and so even though EAP1020/3/2 is only fragmentary it is useful to have a selection of openly accessible leaves available for further study. 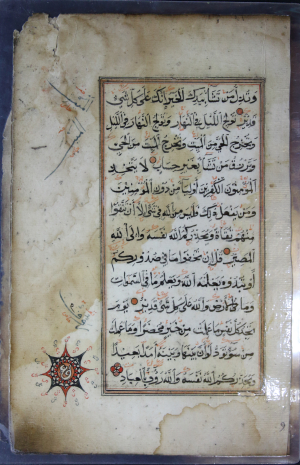 In fact, EAP1020/3/2 can be identified as originating from a Qur’an manuscript now held in the Museum Sang Nila Utama in Pekanbaru, the provincial capital of Riau, as 07.001.2007 (writen on the final page; the volume also has reference numbers on the covers of 07.5194.95 and 07.15/17). This volume is lacking the beginning, with the text starting in the middle of Surat Al 'Imran, Q.3:82, and thus continues – after a lacunum of one folio – from the fragment that is EAP1020/3/2. The volume is complete at the end and contains a colophon giving the date of completion as 4 Jumadilawal 1153 (28 July 1740), and identifying the scribe as Ibrahim al-Zabidi, who was born in Zabid, in Yemen.  This is a fascinating and rare piece of codicological evidence linking the manuscript tradition of the Malay world and  Yemen; although it is quite common to encounter Islamic manuscripts in Southeast Asia copied in Mecca, it is much rarer to find Yemeni connections attested to in writings. 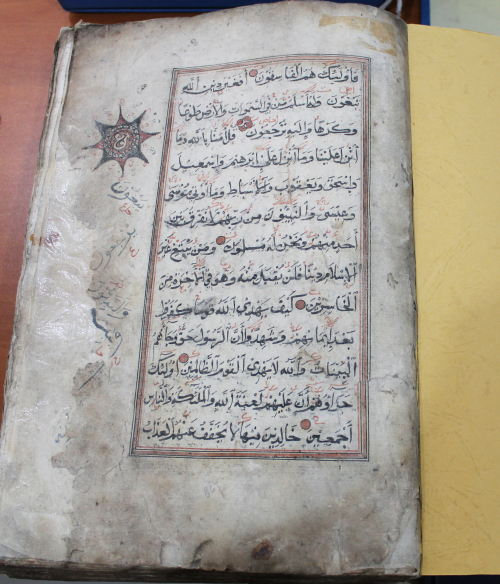 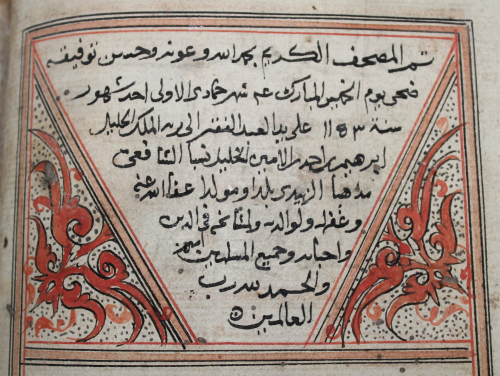 Colophon of the Sulawesi-style Qur’an, dated 4 Jumadilawal 1153 (28 July 1740), naming the scribe as Ibrahim, as being of the Shafi'i school of law, and from Zabid in Yemen where he was born (al-Shafi'i madhhaban al-Zabidi baladan wa-mawlidan, with thanks to Colin Baker and Oman Fathurahman for this reading). Museum Sang Nila Utama, Pekanbaru, Riau, 07.001.2017.  Photograph by A.T.Gallop, Nov. 2018.

A considerable number of the Qur’an manuscripts digitised in West Sumatra, Kerinci and Kampar share the characteristics of the ‘Minangkabau’ Qur’an tradition. Very few decorated elements have survived, and in many cases, as in the case of the Kampar Qur'an above, only constitute the right-hand page of what would have been a double decorated frame across the opening two pages. The few examples do however illustrate the defining features of Minangkabau illuminated Qur’an manuscripts, namely a marked emphasis on the colour red, used in combination with the ubiquitious black (ink) and reserved white (of the background paper). 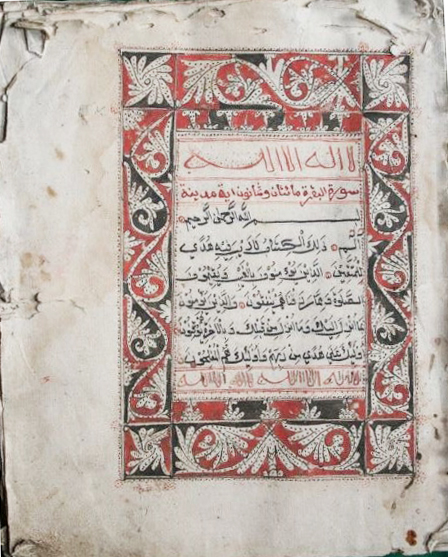 Qur’an manuscripts in the Minangkabau tradition are generally plain, with simple textframes of two or three red ruled lines, or red and black lines, while verse markers are often hand-drawn black or red circles. Surah headings are in red ink and are sometimes set in ruled frames, while the start of a juz’ may be marked with a marginal inscription in red ink and the first few words highlighted in red ink. The hand is small and neat, and usually totally competent, and the text is written in strong black ink. In my 2017 article ‘Fakes or Fancies?’ I wrote about some recent ‘problematic’ Islamic manuscripts from Southeast Asia, particularly Qur’an manuscripts, which needed careful analysis for a proper evaluation. A number could be classified as ‘enhanced’ manuscripts, namely original usually 19th-century manuscripts with recently-added decoration or text designed to increase the commercial value of the book. Others were evidently ‘new’ manuscripts, often written on non-traditional materials such as wood, leather or palmleaf, or in unusual formats such as scrolls or books of stitched palm leaves, usually with a deliberate blurring of clarity around the date of creation. The Kampar project digitised three examples of such ‘new’ Qur’an manuscripts, accurately dating them to the early 21st century, but recording the inclination of all the owners to regard these as ‘old’ manuscripts. These digitised 'new old' Qur’ans, all three of which are pictured below, therefore stand as a useful record of this recent market phenomenon, which is also discussed in Dr Ali Akbar’s aptly-titled blog series, Qur'an kuno-kunoan, 'So-called 'old' Qur'ans' and Jangan langsung percaya, ‘Don’t be so quick to believe’. 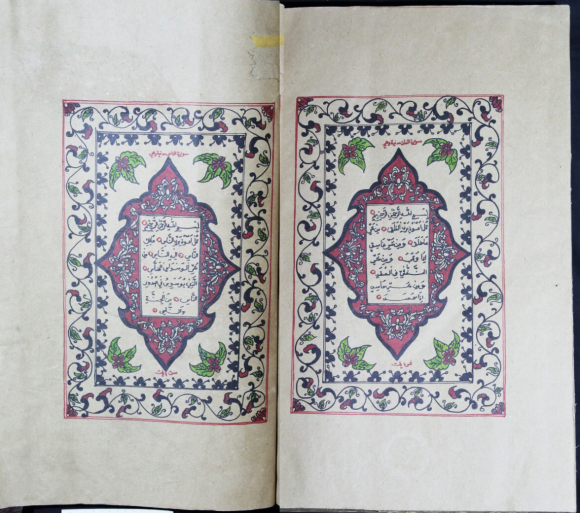 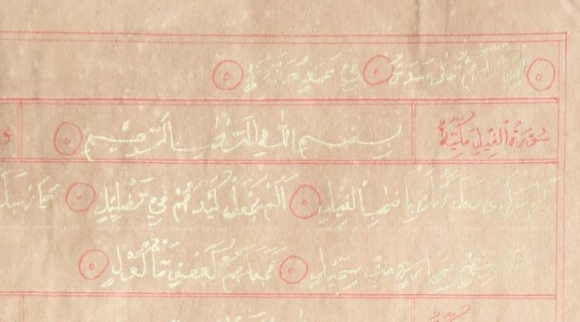 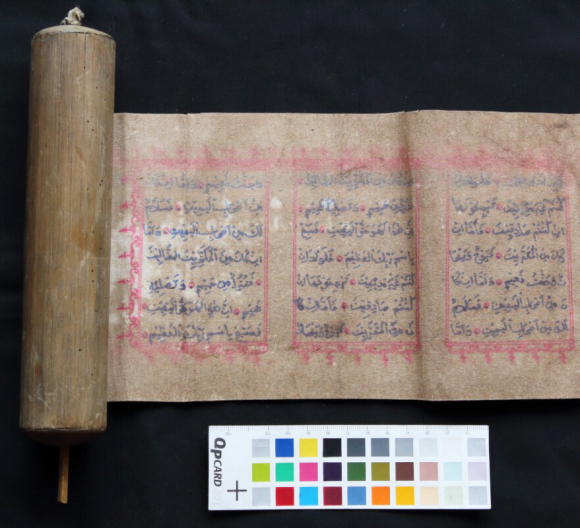 Qur’an manuscripts from Southeast Asia digitised through EAP
Each manuscript can be accessed though the EAP website by inserting the shelfmark below into the ‘Search all endangered archives’ box. Alternatively, a pdf with direct links to each manuscript can be found here: Download EAP Qurans-2021

Posted by Annabel Gallop at 1:47 AM