The Burmese Harp: (3) Heaven and Earth

In my two previous blogs on the Burmese harp - (1) Seduction of the Senses and (2) Matters of the Heart - I gave examples of how the Burmese harp or Saung was incorporated into Jātaka stories (stories of the previous lives of the Buddha). In this final instalment I will discuss how the Saung was intimately connected with the life of the Gautama Buddha.

The Buddha was originally born as a prince into a lavish lifestyle, and is described as having been accompanied by forty thousand dancing women and an all-female orchestra. In this depiction of the court (Or 14197) one can see alongside the dancer a full female orchestra with a fiddle, a xylophone, a harp (back row, next to the fiddle), a flute and a drum. Two of the women are clapping their hands in rhythm. 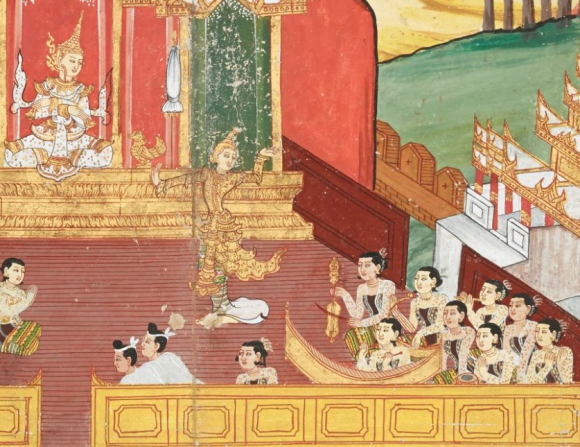 Prince Siddhartha Gautama enjoying the entertainment of his private orchestra and a dancer. British Library, Or 14197, f. 1r

The orchestra played an important part in the Buddha’s disillusionment and decision to leave his princely life. One day, when he returned to his palace the orchestra started enthusiastically entertaining him. However, his mind was already detached from such pleasures and he fell asleep. Without its main audience, the orchestra also dozed off while still hugging their instruments. When the prince woke up and saw them lying around in a disorderly fashion, leg showing here, breast showing there, some sleeping with their mouths open, some grinding their teeth, he became even more disillusioned. He decided to bid goodbye to his sleeping wife and child and leave the palace for good in the Great Departure (Or 4762, Or 14197).

Siddhartha Gautama peruses the sleeping orchestra. The Saung player (on the right) has fallen asleep on her instrument. British Library, Or 14197, f. 3r 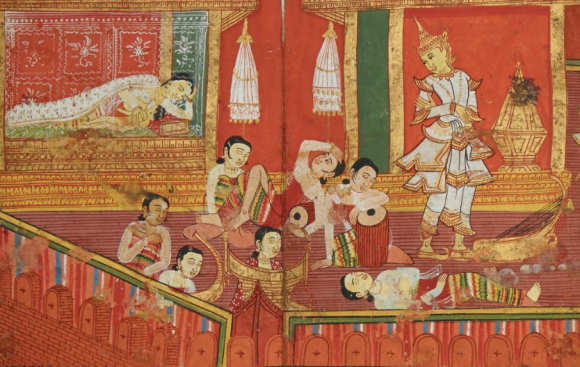 Siddhartha Gautama, standing next to a mislaid harp, peers over the orchestra, strewn about in a disorderly fashion. British Library, Or 4762, f. 1

Although the Buddha left his earthly orchestra behind, the Saung still followed him throughout his journey in heavenly form. In this rare illustrated Kammavācā manuscript (Or 13896), which is currently on display at the Treasures Gallery at the British Library, the deva Sakka plays the harp in order to lead the Buddha, who now has become a monk, to the Middle Path. 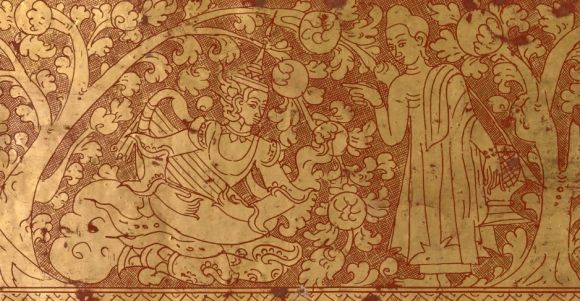 Sakka plays the Saung to the Buddha in order to lead him to the Middle Path. British Library, Or 13896, f. 16r 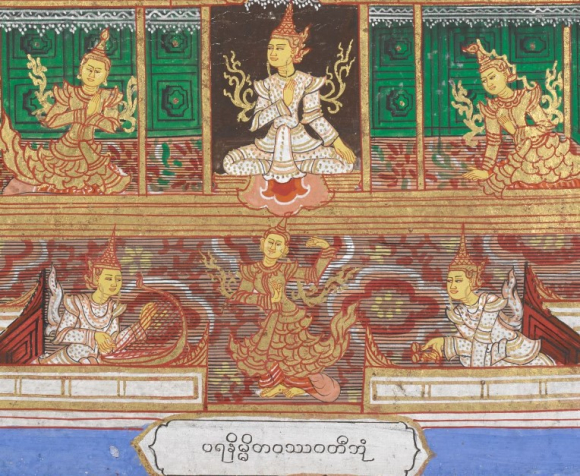 The ruler of the Paranimmita-vasavatti realm accompanied by his heavenly musicians and a dancer. British Library, Or 14004, f. 15r

The most impressive orchestra of all, however, could be found in the Tāvatiṃsa realm, or the realm of the thirty-three devas, located on top of the Sumeru world mountain. In the depiction below we can see two joined orchestras with a dancer in the middle. There are two harps and a bell in the left side orchestra, and a xylophone and a harp in the right side orchestra (Or 14004). 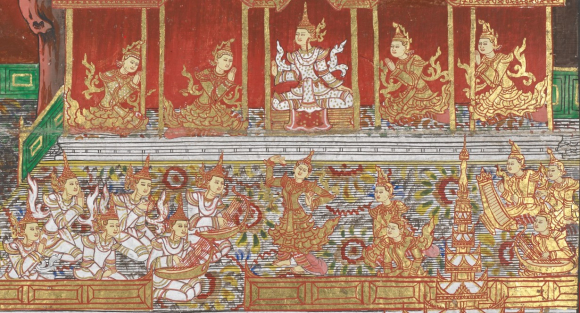 The ruler and the heavenly orchestras of the Tāvatiṃsa heaven. British Library, Or 14004, f. 21r

Until the 19th century the Saung was played exclusively within the royal court, and was considered the most valued of instruments. The most notable harpists were given posts at court, where they composed many famous pieces. Myawaddy Mingyi U Sa (1766-1853) was one of these great musicians, and added six more harp strings to the existing seven, thus producing a fuller range (of two and a half octaves). A fourteenth string was added by the famous and last court harpist U Maung Maung Gyi (1855-1933), who was appointed to King Mindon’s court in Mandalay, where he was given the title "Deiwa-Einda" (Heavenly Musician) already at the age of thirteen. The Saung gradually came out of the palace during the 19th century via small outlying courts and travelling troupes of actors and musicians. Since then it has found its way to the general public and can now be enjoyed by all. 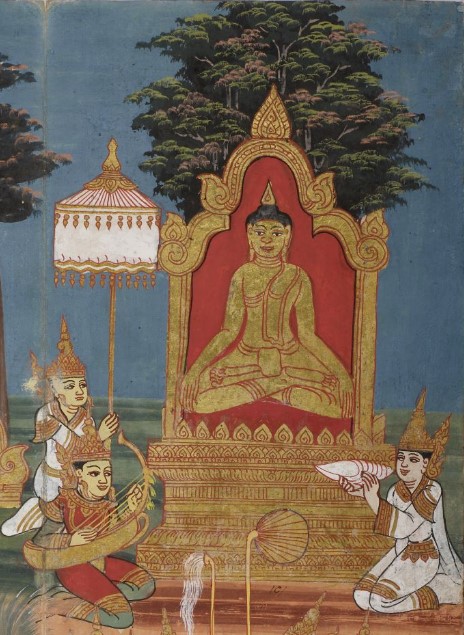 The Buddha meditating under the Bodhi tree, with the devas Sakka, Brahma and Mahākāla next to him singing songs of praise. British Library, Or 14297, f. 18r

The Saung returned at the pivotal moments of the Buddha’s life. The scene above depicts the beginning of the process of meditation that in the end led to Enlightenment. The Buddha is here shown meditating under the Bodhi tree, with the three devas Sakka, Brahma and Mahākāla from the three realms next to him singing songs of praise. Sakka blows the conch, while Mahākāla plays the harp and sings with over a hundred verses (Or 14297). 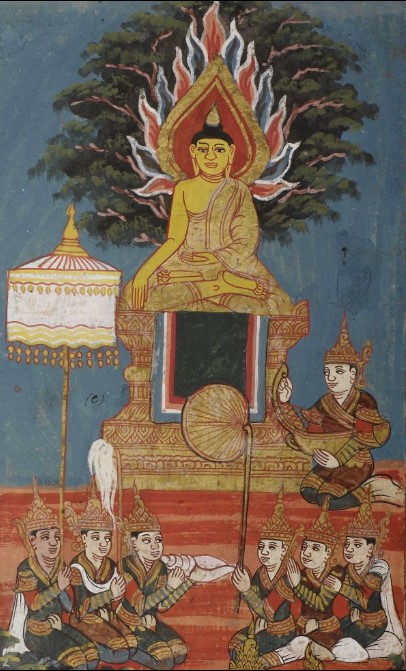 The devas ran away when Māra’s frightening troops arrived, and a difficult mental battle ensued which the Buddha eventually conquered. He had now attained Enlightenment, and the event was celebrated and rejoiced with much music. The Saung (with Mahākāla) is depicted here again right at his side (Or 14297). 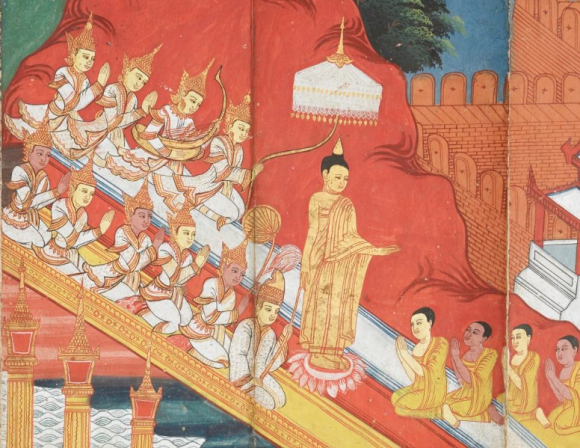 The Buddha descends from Tāvatiṃsa heaven with a heavenly retinue beside him. British Library, Or 5757, f. 17r

After his Enlightenment the Buddha travelled around and taught the Dhamma to others. In the above illustration the Buddha is descending from the Tāvatiṃsa heaven, where he spent three months preaching the Dhamma to his mother, who was there. The Saung accompanies his descent to Earth (Or 5757). It has been said that the Saung was indeed the Buddha’s preferred instrument or even a symbol of him, and in temple murals he has been portrayed as a harpist in many of his previous incarnations.

A documentary about the harp in Southeast Asia, by Patrick Kersalé, Sounds of Angkor, 2021, including music clips of the Burmese and Karen harps, can be viewed here.