An early Tai-Chinese glossary in the Hua yi yi yu

The 14th century brought about remarkable changes in the northern part of Southeast Asia. Chinese records indicate that the reign of the first Ming emperor saw the encouragement of tributary relations with emerging states of Tai-speaking peoples with the aim of obtaining their symbolic acknowledgement of China’s cosmological centrality. By the end of the 14th century, the Ming court had established pacification offices in Yunnan and in Tai polities sharing a border with Yunnan, through which the emperor claimed to govern those states. Activities relating to the pacification offices, including the exchange of messages, reception of envoys, and military actions, were recorded in the “Veritable Records of the Ming” (Ming Shilu) from 1368 to 1644 CE. According to the Ming Shilu, the pacification offices involving Tai peoples were Che Li (Xishuangbanna), Babai-Dadian (Lan Na / Northern Thailand), Laowo (Laos), and Luchuan / Pingmian (both referring to Tai Mao / Shan polities). 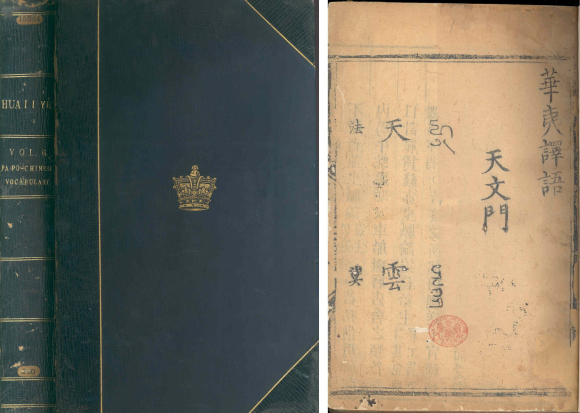 To make communication with the pacification offices possible, the Hua yi yi yu 華夷譯語, a multilingual dictionary, was compiled from 1407 onwards by the Bureau of Translators, which was the first office to occupy itself with the translation of documents from tributary polities. In 1511 the Babai Bureau officially started as the ninth office studying foreign languages, following offices for Mongol, Jurchen, Tibetan, Sanskrit, Persian, Dehong Dai, Uighur, and Burmese. The Xian Luo (Thai or Siamese) office started its work in 1579.

Six volumes of the Hua yi yi yu were acquired by the British Museum on 7 August 1885 from Joseph Edkins, a British protestant missionary and sinologist who had spent over fifty years in China. Each volume was originally bound in a traditional Chinese stitched binding which was replaced by a European hardcover binding for conservational reasons at the British Museum. With the other collections in the British Museum Library, the work was transferred to the British Library in 1973 (British Library 15344.d.10).

Volume six contains a Tai-Chinese glossary on 109 folios compiled by the Babai Bureau, which was initially catalogued as a “Pa Po-Chinese vocabulary” at the British Museum. The largest part of the original text was produced using woodblock printing technique on thin cream-coloured paper. This extremely thin paper adheres to a stronger sheet of white “recycled” paper, which has on its back a legal code from the Qing dynasty (1644 -1912). These sheets of paper are interleaved with additional sheets of “recycled” paper with text in the Manchu language. This method was used mainly when Chinese books were repaired during the 18th and 19th centuries to reinforce very thin printing paper. 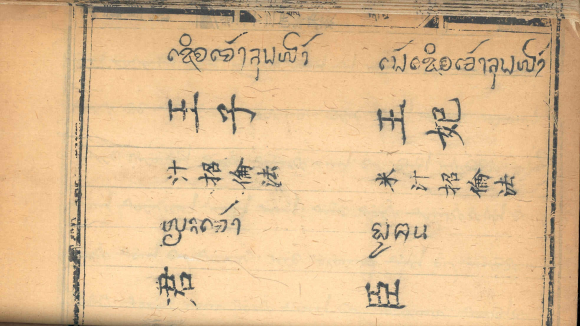 Example of a page in the glossary with Tai words at the top, followed by the Chinese translation (second line) and Tai pronunciation in Chinese characters (third line). British Library, 15344.d.10

“Pa Po” is an alternative romanisation mode for Babai referring to the language spoken in Babai-Dadian. The term was coined by the sinologists Friedrich Hirth and F. W. K. Müller towards the end of the 19th century. It is mostly associated with the former kingdom of Lan Na, which is thought to have been geographically relatively equal with northern Thailand. However, according to the Ming Shilu Babai-Dadian was a larger polity. The Chinese records give several hints that Babai-Dadian extended east to Che Li (Jinghong in Xishuangbanna), south to Bo Le (possibly Phrae, bordering Sukhothai), west to Da Gu-la (possibly a pre-Ahom/Shan polity), and north to Meng-gen (Kengtung).

Contents of the glossary

On the first folio, only Hua yi yi yu is mentioned as the title for the whole work, literally meaning “Glossary of the pronunciation of foreign words”. The book title is followed by the title of the first section, and the first two entries in this chapter. There are usually four entries per page.

The book contains sixteen sections, which reflect the Chinese world view during the Ming dynasty. All volumes of the Hua yi yi yu in different languages follow this same structure, although some volumes contain a different number of entries, or sometimes the order of the sections is different, which may be due to binding and rebinding. The sections cover the following subjects: 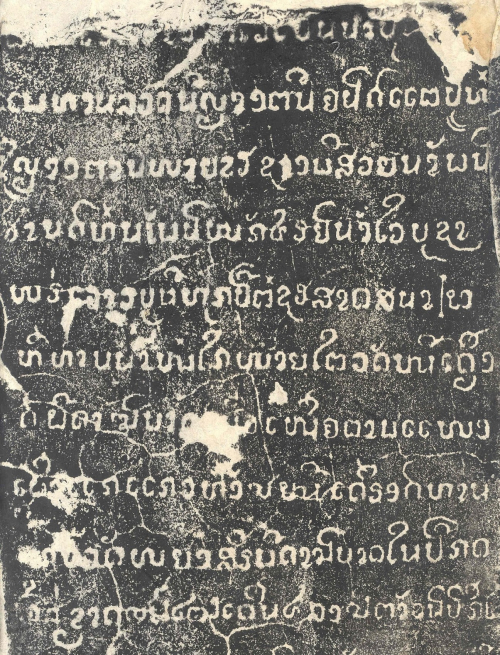 Example of Fak Kham script on a rubbing from an undated stone inscription found fifty km north of Kengtung, rubbing made in ca. 2000. British Library, Or. 16784

The Tai script in the glossary has similarities with examples of the Fak Kham script (above) dating from between 1411-1827. The earliest known evidence of Fak Kham script is from a stone inscription at the Lamphun Museum (Ho Phiphitthaphan Lamphun) dated 1411 (Kannika Wimonkasem 1983). Fak Kham script was not only used in northern Thailand, but also in the areas of Kengtung and Laos. Similarities can also be found with the alphabet used in stone inscriptions that were discovered c. 50 km north of Kengtung and in Northern Laos in the areas of Luang Prabang and Muang Sing.

The glossary contains 800 words in the native language, with translations into Chinese language, and Chinese characters for pronunciation. The Chinese translation provides a word that would be understood by the Chinese user of the glossary, and therefore the original meaning of the corresponding word in the native language sometimes gets lost in translation. Misinterpretations occur with regard to titles and names. For example, the name “Maenam Khong” (Tai for Mekong River) was translated with the Chinese character for “lake”. Words of Pali and Sanskrit origin appear occasionally, as for example thevada (from Pali: devata). Paraphrases are very rare, which means that for each Chinese term there is mostly a plain Tai word without further explanation. 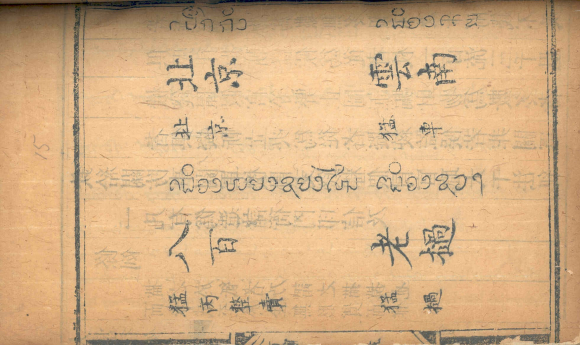 This post is a revised summary of an article “The 'Pa-Po'-Chinese glossary in the Hua Yi Yi Yu” published in the SEALG Newsletter, vol. 42 (December 2010), pp. 9-21.  I would like to thank my colleague Sara Chiesura, Lead Curator for Chinese, for her invaluable advice with this blog post.