The Courtesan and the Preacher: The Romance of Mahsati, an Early Female Persian Poet 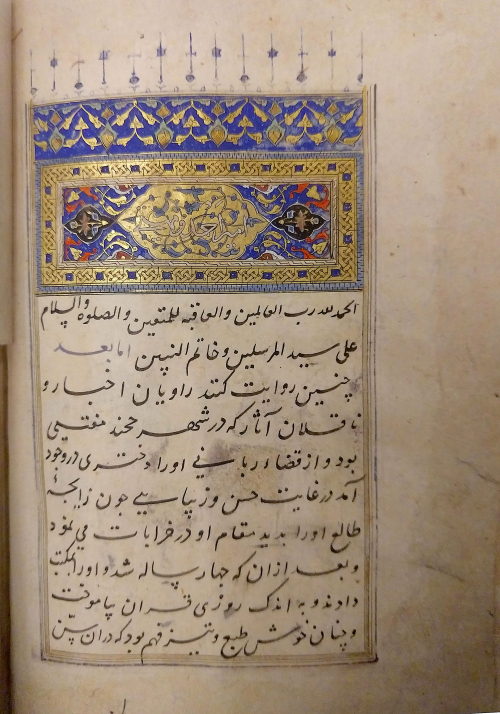 The opening of the anonymous romance of the female poet and musician Mahsati and Amir Ahmad the preacher’s son. Copy dated Rabiʻ I 867/1462 (British Library Or.8755, f. 22v)

Mahsati was one of the earliest female poets of classical Persian but the biographical details about her are rather meagre. She probably lived in the eleventh or twelfth century and may have been from Ganja, but Nishapur, Badakhshan and Khujand have also been given as her place of birth by later authors. She is said to have served in the capacity of a secretary (dabirah) or singer and musician at the court of the Seljuq Sultan Sanjar (r. 1097-1118), but at least one historian also places her husband in the court Ghaznavid Sultan Mahmud (r. 998-1030). In the late fifteenth century, Dawlatshah in his biographical dictionary Tazkirat al-shu‘ara confirms the connection with Sultan Sanjar and lists her among the ruler’s panegyric poets, along with others such as Adib Sabir, Rashid Vatvat, ‘Abd al-Vasih Jabali, and Anvari. Dawlatshah describes Mahsati as “the beloved of the sultan and elegant lady of the times” (mahbubah-yi sultan va zarifah-yi ruzgar) and includes an anecdote about how she won the sultan’s favour with her verbal skills as he was trying to mount his horse in the snow. She is said to have uttered this poem extemporaneously:

Heaven has saddled the mount of felicity for you, King,
And praised you among all the rulers,
In order that your steed’s golden shoe not get muddied
It has spread silver on the ground.

Mahsati is better known for her earthy poems, especially for the quatrains composed on the boys of the bazaar in the shahrashub (amorous, sometimes bawdy verse) genre. The corpus of her poems has increased over the years and modern editions contain between 250 to 300 poems, many of which are also attributed to other poets such as ‘Umar Khayyam.[1] The Swiss scholar, Fritz Meier, made a life-long study of Mahsati and published a corpus of her poems in Die schöne Mahsatī.[2] His research, especially on the fifteenth century romance starring Mahsati and her lover Amir Ahmad or Pur-i Khatib, who was the son of a preacher named Khatib, was published posthumously by Gudrun Schubert and Renate Würsch.[3]

The anonymous romance, Amir Ahmad u Mahsati, survives in at least three versions. One of these is in an illustrated manuscript in the British Library, Or. 8755, which also includes two other short versified narratives: Manqabatnamah, or Qissah-yi shir u div, on the exploits of Ali, and Qissah-yi Isma‘il about Ism‘ail and Ibrahim. The eighteen paintings in the manuscript, thirteen of which belong to the Mahsati romance, are in the Turkoman style.[4]

The story of Mahsati and Amir Ahmad is narrated in prose with 475 quatrains making up the dialogue by the main characters. It is told that Mahsati is the well-educated daughter of a mufti in Khujand whose special talent lies in impromptu versification. The townspeople disapprove of her musical abilities but when they complain to her father, he informs them that according to her horoscope she will become a courtesan. After her father’s death she and her mother move to Ganja where she settles in a tavern. She drinks wine, recites poetry, and even gets the king to fall for her charms. In the same town lives a preacher’s son, Amir Ahmad, who teaches around four hundred students. One night he dreams that he is being offered wine by a houri in paradise. Upon waking up he goes out and sees Mahsati as she plays music on a harp: Mahsati and Amir Ahmad see each other for the first time (British Library Or.8755, f. 29v)

In true fairytale fashion they fall in love with each other. Amir Ahmad leaves his home and begins to lead a dissipated life with his beloved. When his father has him locked up in a cell his pupils come to intercede on his behalf and hear his laments. His poems about Mahsati are mistaken by his father for verses on mystical love and he is thought to be cured of his lovesickness. But upon being released, he goes back to the tavern to be with Mahsati. As the condition of a wager with his father, he mounts a mule and is ready to go to the mosque if the beast leads him there, but the mule takes him right back to Mahsati. 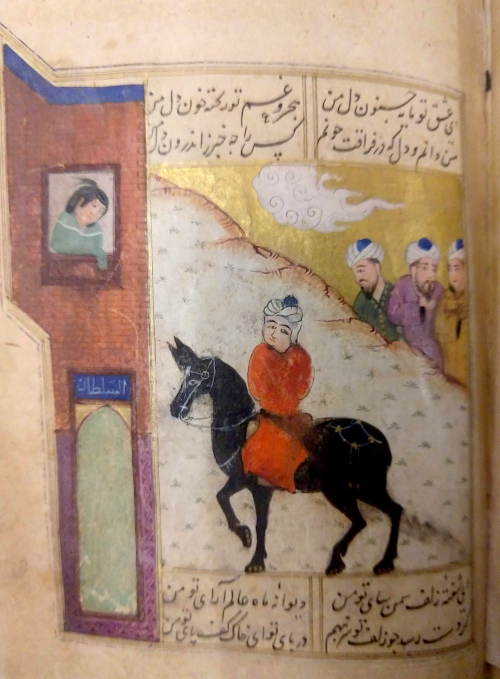 The father persists and sends his pious brother Pir ‘Usman to go and bring the profligate back, but he himself becomes drunk and has to be carried home. Upon the intercession of the king, the tavern is ordered to be closed and the drinkers to disperse. Mahsati goes off to Khurasan followed by Amir Ahmad. There he discovers her at a feast with three hundred distinguished poets and scholars. 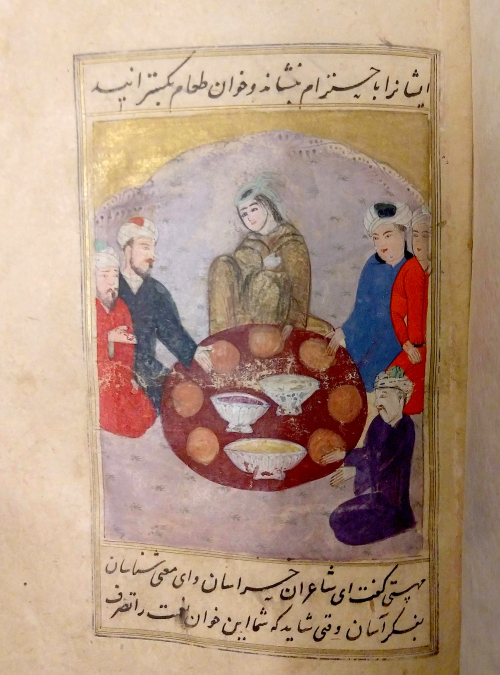 The couple eventually returns to Ganja, where in the marketplace Mahsati sees and composes poems on a group of professional youths comprising a beer-seller, camel driver, spice-seller, bloodletter, barber, as well as a rind, a rakish drunkard. Amir Ahmad and Mahsati accosted by a drunkard in the bazaar (British Library Or.8755, f. 95v)

There she also encounters the master poet Sana’i whom she satirizes in ribald verses. In the meantime, Amir Ahmad finally reconciles with his father and resumes his old life. Mahsati also repents and is allowed to marry her beloved. They lead a devout life and bring up god-fearing children. Eventually Amir Ahmad becomes the preacher of Ganja after his father’s death, and after his death his grave becomes a shrine for penitent drunkards.

The romance about Mahsati provides a contextualized narrative built around her poems. She is transformed into a pious, married woman who is repentant of her past life, but her earlier non-conventional persona persisted in the biographical accounts about her. However, one must be careful to not confuse either persona, the one that comes through in her poems as a poet of the bazaar, or in the romance with her conversion, with that of the actual individual.[5] Even if we do not have historical facts about her life, Mahsati’s poems were never forgotten over the centuries. Especially in the nineteenth century Persian literati in Iran and India sought to retrieve the voices of women and create a female canon of poets for which the inclusion of some classical poets was necessary to provide the authority of tradition. Mahsati, along with Rab‘ia Quzdari or Balkhi, feature in the small group of the earliest poets in these anthologies and continue to be remembered and read in the erstwhile larger Persianate world.