An ‘enhanced’ Qur’an manuscript from Madura

Many manuscripts show evidence of multiple layers of history. For example, a 12th-century manuscript text with marginal annotations from the 15th century might be set in new decorated borders in the 19th century, or a 16th-century Mughal manuscript could have added miniatures from the 18th century. Evaluating such manuscripts depends on an accurate identification of the nature and dating of the constituent parts, and an understanding of the motivation for any additions or enhancements, whether for reasons of scholarship, conservation, beautification or deliberate manipulation, the latter most commonly for commercial gain. One such complex manuscript in the British Library is a Qur’an manuscript from Madura, Or 15877, which was acquired at a Christie’s South Kensington auction sale in London in 2001, and which just been fully digitised. 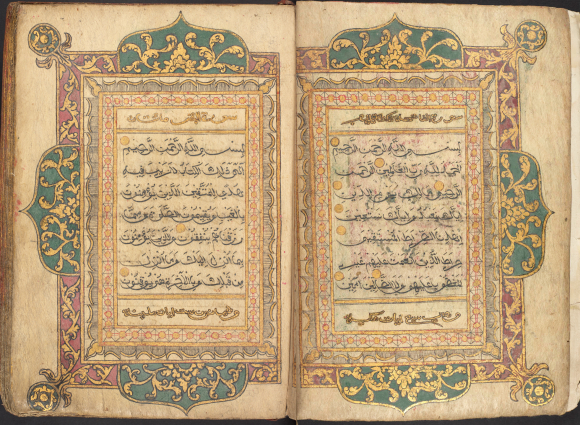 At first glance, this manuscript appears to be a typical illuminated Qur’an from Java. It is written on dluwang, Javanese paper made from the beaten bark of the mulberry tree, and has three pairs of decorated double frames at the beginning, middle and end of the book, with marginal ornaments marking every juz’ or thirtieth part of the text. The most impressive feature of this Qur’an is the calligraphy: the whole text is written in a supremely confident, dashing, cursive hand, with a pronounced forward slope, as can be seen below in the repetition of the first chapter, Surat al-Fatihah, at the end of the volume. According to the colophon below written in Javanese, this manuscript was copied by ‘Abd al-Laṭif in the hamlet of Larangan, in the village of Puri (dusun Larangan kampung Puri), which can probably be located in the regency (kabupaten) of Pamekasan, near Sumenep, on the island of Madura. 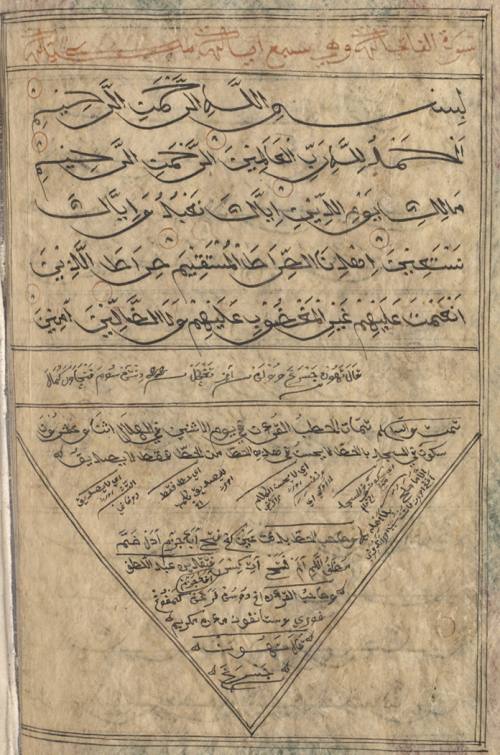 Final page of a Qur’an from Madura, with a repetition of the Surat al-Fatihah, with the colophon in the triangular panel. British Library, Or 15877, f. 297v

What is not typical though is a full-page illuminated frontispiece at the start of the volume. In the form of carved wooden standing screen, it is inscribed in the middle in vocalised Arabic script: Pangeran Paku Ningrat Kraton Sumeneb 1793, ‘Pangeran Paku Ningrat, the Palace of Sumeneb, 1793’. Sumenep is one of three princely courts on the island of Madura, and the Javanese year 1793 is equivalent to AD 1865. This strikingly decorated page in fact acts as a warning ‘red flag’, for such full-page representational illuminations are not found in any Qur’an tradition in Southeast Asia. 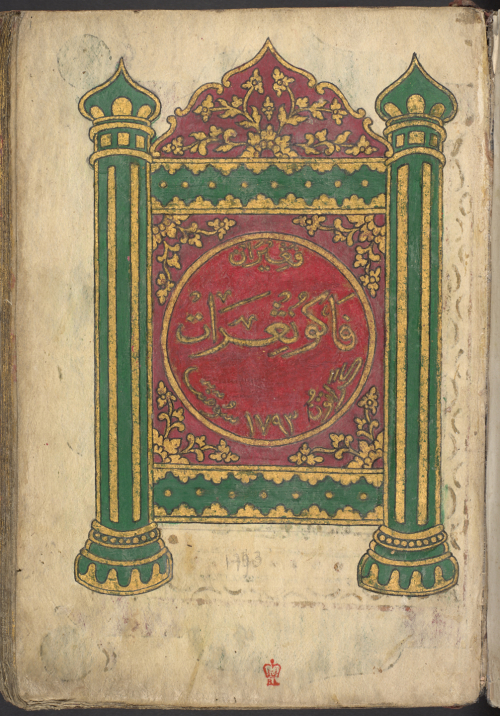 There are numerous other hints that Or 15877 is an ‘enhanced’ manuscript, namely a genuine but probably originally plain 19th-century Qur’an manuscript from Madura, which was most likely only illuminated shortly before being consigned for sale. Hundreds of Qur’an manuscripts from Java and Madura, copied on both dluwang and on European paper, were created devoid of decoration but with the text on the two opening pages set in smaller frames, as for example in Or 16877 in the British Library, shown below. In recent years there have been countless examples of such Javanese Qur'an manuscripts with recently added illumination, especially in the wide borders of the opening pages. Sometimes it is easy to recognize these ‘enhanced’ manuscripts through the garish and harsh synthetic pigments used, as in Or 15877, which have often bled through the paper to the other side. In Or 15877, the faint powdery sheen evident on the opening pages appears to be due to talcum powder rubbed over the illuminated elements, presumably to induce a degree of patina. 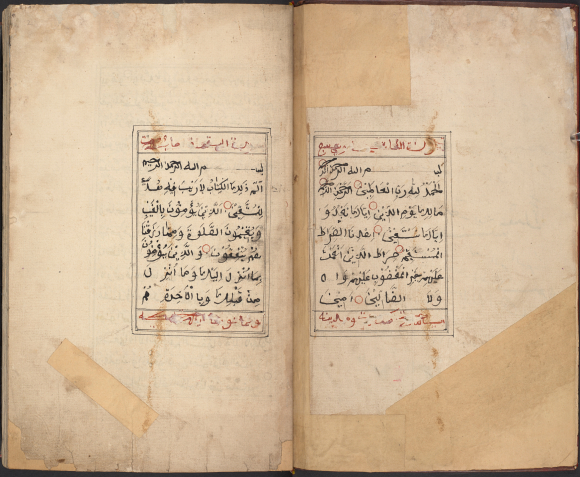 In the original manifestation of Or 15877, the start of each juz’ was indicated with a star-shaped ornament in the text with a calligraphic inscription in red ink in the margin identifying the number of the juz’. As part of the late 20th-century ‘beautification’ process, the facing page of each new juz’ has had triple green medallions added in the margins. In the example shown below, these medallions overlie an earlier textual correction, proving that the ornamentation is a later addition to the manuscript. 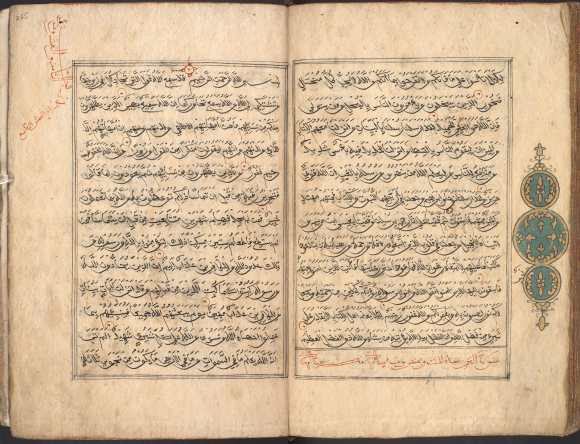 The start of juz’ 28 at Surat al-Mujadilah (Q. 58), with the original calligraphic inscription in red ink in the margin at the top of the left-hand page, but with the recently-added green medallions on the right-hand page partially obscuring an old textual correction in the margin. British Library, Or 15877, ff. 264v-265r

In Qur’an manuscripts in which illuminated frames were added at the time of creation, the text boxes on those pages would normally have been made smaller – sometimes, much smaller – to allow for the ornamentation of the borders. Another incongruous feature of the British Library Qur’an Or 15877 is therefore the double decorated frames in the middle and at the end, which have been squeezed into the narrow margins around the full text pages. Moreover, in all Qur’an manuscripts produced in the Javanese tradition, illuminated frames in the middle would frame the start of Surat al-Kahf, but in this manuscript they have (inadvertently) been placed on the following two pages, starting with Q. 18:17. 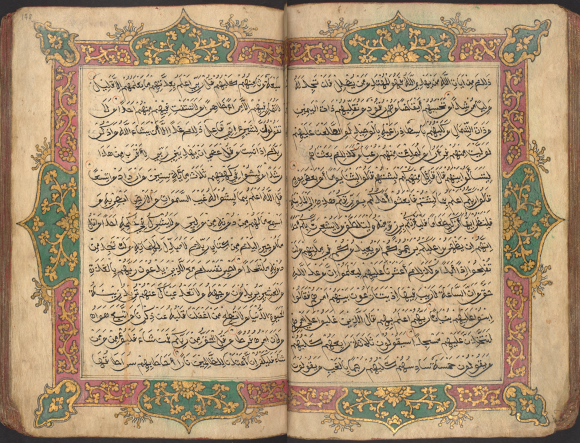 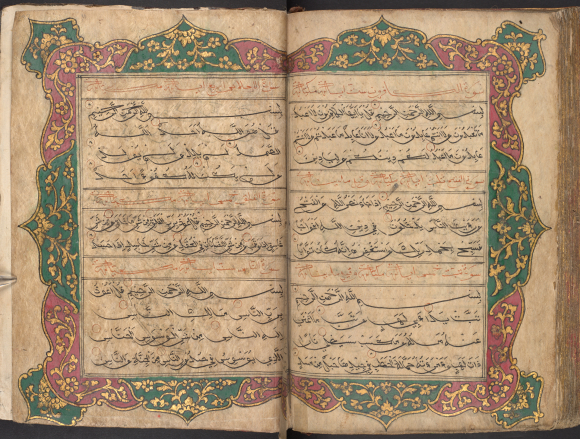 It is considerations about the sizing of the illuminated frames in the middle of the Qur'an which help to interpret one of the most puzzling aspects of this many-layered manuscript: the presence on the doublures – which in the case of Or 15877 comprise two sheets of European paper pasted on the inside of the front and back covers – of two small illuminated panels. That at the front is inscribed Bismillah al-Rahman al-Rahim, 'In the name of God, the Merciful, the Compassionate', and that on the back Alhamdulillah, 'Praise be to God'. Both panels contain small cartouches above and below in which an inscription in red ink has been defaced. The online tool retroReveal has helped to decipher the erased inscriptions, which on the front panel can be read as Surat / al-Kahf. The second pair are more difficult to read but the top word may be Makiyyah, referring to the place of revelation of this chapter.  Thus the two panels, together, contain the first words of the Surat al-Kahf, and appear to have been originally created as part of the central illuminated pages of a Qur’an manuscript. When that enterprise was, for some reason, abandoned, the pages were repurposed as doublures in Or 15877, with the sura headings erased to leave simply two pious expressions set in decorated borders. The two doublure pages have been digitally reconstructed below to show how the central pages of the Qur’an were originally envisaged, alongside the middle illuminated pages from another Javanese Qur’an manuscript with almost as small text boxes for the start of Surat al-Kahf. 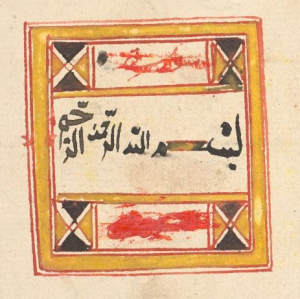 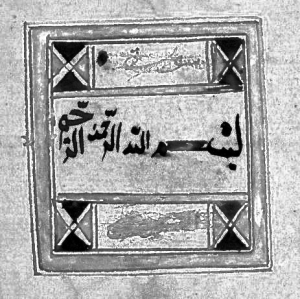 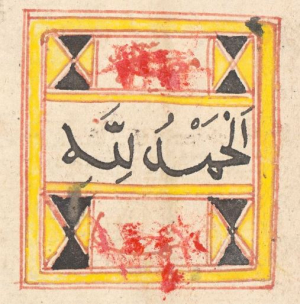 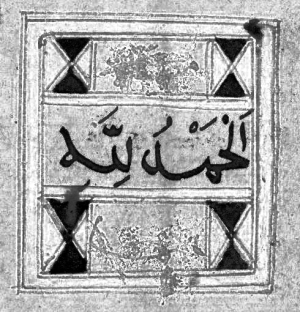 Illuminated panels inscribed (top) Bismillah al-Rahman al-Rahim and (below) Alhamdulillah, with the legibility of defaced red text enhanced by retroReveal. British Library, Or 15877, front doublure and back doublure. 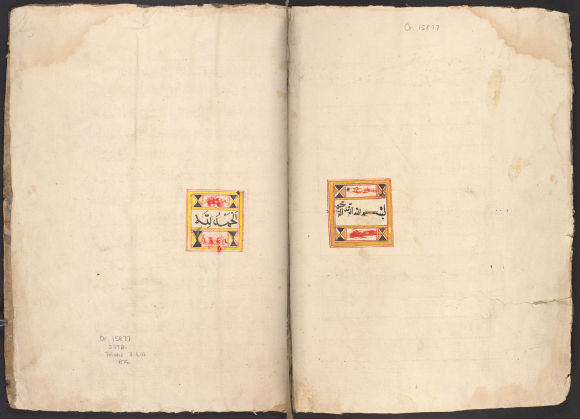 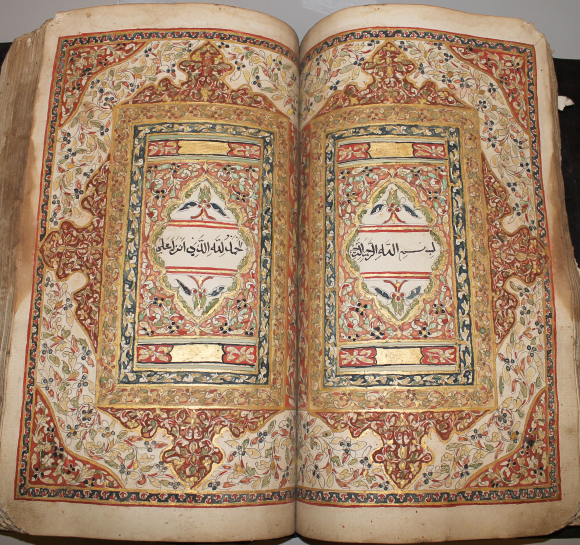 Central pages of a Qur’an manuscript from Java, marking the start of Surat al-Kahf, also enclosing a single line of text on each page. National Library of Singapore, Farish Noor Collection, B29235337A.

The binding of Or 15877 is also curiously hybrid. The leather covers themselves are evidently 19th-century, and the stamped decorative medallion with four petals at the centre is similar to those found on other Madura manuscripts (cf. Plomp 1993: Figure 4). However the covers are slightly smaller than the text block and thus the binding may not be original to this particular manuscript. The edges of the page have been gilded, which can be assumed to be another recent enhancement, such gilding is never normally encountered in Southeast Asian Qur’an manuscripts. 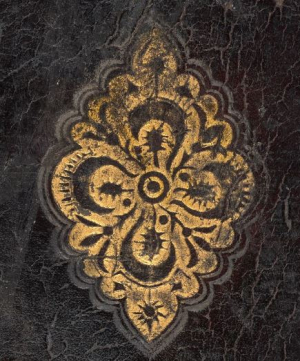 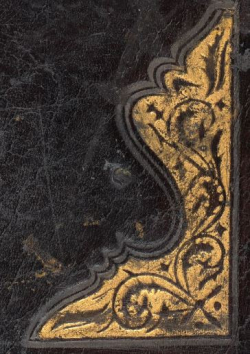 Detail of the stamped central medallion and corner piece from the binding. British Library, Or 15877, front cover.

In the most generous assessment, the process of 'enhancing' these older Javanese Qur'ans could be seen as part of an ages-old inclination to 'beautify' the Holy Book.  However, in some other cases of augmentation of Qur'an manuscripts, whereby fake colophons attributing production to Southeast Asia have been added to Qur'ans from Daghistan, no such extenuating factors can be adduced.

Posted by Annabel Gallop at 1:10 AM