One of the crucial problems in philology is deciding whether a manuscript is a new creation or an attempt to create a faithful copy of an already existing text, but it is often hard or even impossible to solve this problem because of a lack of information either in the manuscript itself or from external sources. One of the clues that may help solve this puzzle are the mistakes and corrections the scribe or others have made in the manuscript, either at the time of composing/copying, or at a later stage. Another clue may be the actual number of mistakes: if only a few errors are found it may either be due to the faithful copying of an existing manuscript, or the sign of an expert composer who made very few mistakes while creating the text (see Van der Meij 2017, Ch. 5). Combinations are, of course, also possible, and part of a manuscript text may be copied while other parts may be new or partly new creations. Another thing that can help to understand the production process is an assessment of other manuscripts made in the same culture. Some of these philological issues will be explored through the study of errors and their corrections in an early 19th century Javanese manuscript in the British Library, Sĕrat Jaya Lengkara, Add 12310. 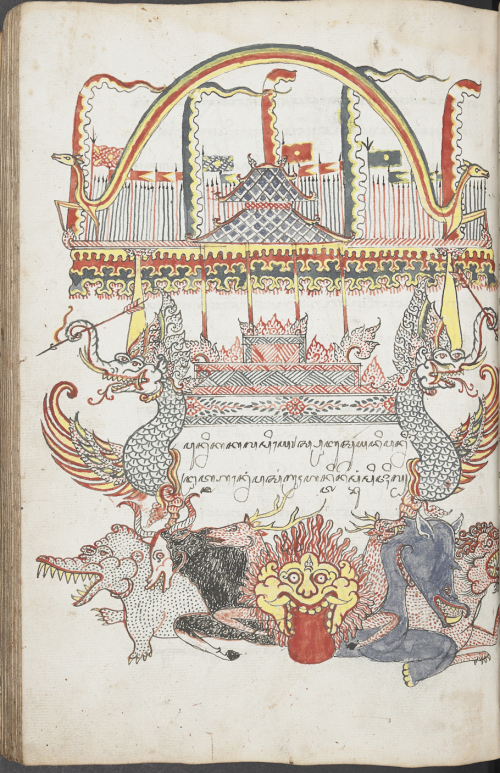 This manuscript of Sĕrat Jaya Lengkara was first identified correctly by Ben Arps in the book Golden Letters (1991). The brief description in the catalogue by Ricklefs and Voorhoeve (1977) wrongly describes it as the poem Sĕrat Gondakusuma, and does not mention one of the most interesting aspects of the manuscript: that it is absolutely loaded with clearly indicated mistakes and corrections.

The manuscript starts with various pages that are clearly try-outs, some in a different hand. The text ends abruptly with three pages written up-side-down with two unfinished and uncoloured decorations, while the last inscribed page consists of jottings. The many errors (visible on virtually every page) are clearly marked, mostly scratched though with one to three black lines and provided with wavy red lines above, as will be clear from the illustrations below. The large number of mistakes make me think that this manuscript is perhaps a trial attempt by a person in training to become a professional scribe? At the same time, the manuscript contains many detailed illuminations and canto dividers. This combination of fine decorations and a bewildering number of clearly indicated errors will need to be explained some other time.

We will have a closer look at this manuscript of the Sĕrat Jaya Lĕngkara and see if we can make sense of the way the scribe worked. We will start with mistakes in single letters (in Javanese called aksara and pasangan, consonants with added vowel sign) or parts thereof, and continue with larger mistakes. 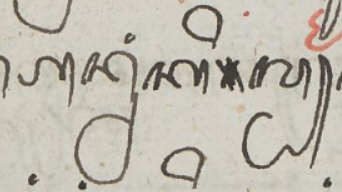 Add 12310, f. 85r:  anangkil. Just before the aksara /la/ at the end of the word the scribe noticed that he had started it in the wrong way, and so he struck it through with two black lines.

Add 12310, f. 115r.  Kakang dipati.The word dipati was started with the aksara /pa/ which was wrong, and so the scribe scribbled it out and placed a red error mark above, and the word started again with /di/.

Add 12310, f. 114v:  nĕmbah aturipun. After nĕmbah the scribe started with the aksara /ma/. For a certain reason he crossed it out and put the aksara /ha/ under it making it aturipun rather than maturipun, which is interesting as it means the same and also does not violate the poetic rules of the sentence. It may have been seen after the writing process was finished as there is no red line above.

Add 12310, f. 113v:  mantri tan kĕna ingetung. The scribe thought he was going to write tannana, but when he realized it was wrong he had to cross out both the aksara and pasangan /na/ with red ink, and repeat the aksara /na/ and added pasangan /ka/ beneath with the vowel sign /ĕ/. 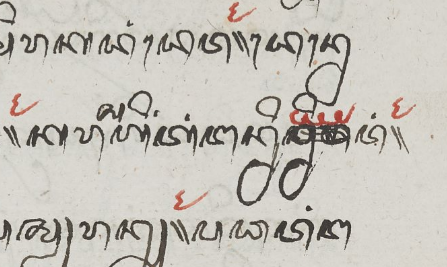 Add 12310, 109r:  karasa ing tangani wong (line two in the illustration). The scribe noticed he had forgotten the aksara /sa/ in karasa and added it above. He inadvertently repeated nni, which he crossed out, but then thought he was writing tanganira which again was wrong, causing him to scribble out the aksara /ra/ and add wang, forcing him to extend into the margin.

A plethora of these errors of essentially single letters occurs, and also of single vowel signs. The fact that these errors were seen by the scribe during the inscription process means that he or she was aware of what was being written, but does not offer a clue about whether or not the text is a new creation or a copy.

Add 12310, f. 7r.  In the first line a verse line was added going into the right margin. The next line has two verse lines crossed out and provided with red lines. The correct lines followed to address the mistake. The first mistake ends in ing mang and continued in the next line with ka gene. The vowel sign /e/ was omitted at the end of in the second line. By erasing both lines and adding the correct text in the right margin this error was addressed.

In this particular case the scribe noticed the error when he or she had already completed this section, and therefore was unable to address the mistake within the text block, and so had to resort to adding text in the margin. Examples of this process are found in many places in the manuscript.

Add 12310, f. 90r.  An entire verse line is crossed out and red error marks added on top. The line starts with rĕspati which is the first word of the second line in the stanza that follows. The words angĕmbat madya are the last words of the second line of the stanza that precedes it, which starts with lumampah angĕmbat madya. The scribe seems to have glanced at a page and combined two parts of different verse lines into one, but noticed it in time to correct the mistake. Perhaps this means that in this and similar cases the text was indeed copied from a source, because otherwise the scribe’s eyes could not have wandered over the page.

Add 12310, f. 92r.   Two lines in the stanza had been forgotten and were added in the top margin. It is preceded by a mark that is repeated in line three of this illustration to indicate where it should be added. This addition means that the scribe was only aware of the omission when he was already further on in the writing process.

In the instances of errors above it is not clear whether the scribe was copying a text, or creating one him or herself. The mistakes could be the result of a scribe knowledgeable in text production and he or she may have noticed omissions because of the requirements of the verse meters. Something of an altogether more complicated nature occurs when whole stanzas were rejected. When they were rejected because they were repetitions it may point to a copying process. However, this is not what we see in this manuscript as no indication can be found why a stanza was rejected and the issue thus becomes more complicated. 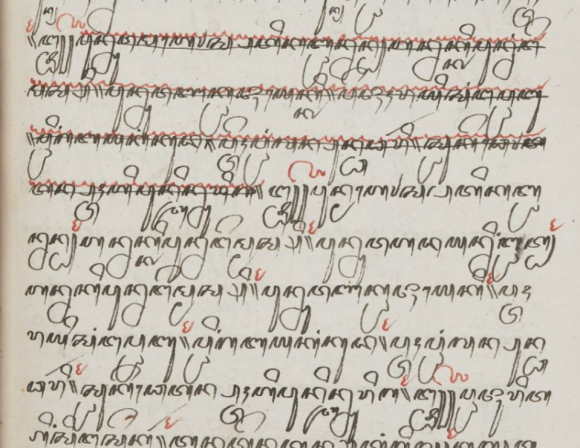 Add 12310, f. 175r. A full stanza was rejected because the eye had jumped from one sentence to the next causing a mistake. The first erased line runs pun uwa maos pati kabranan which is a combination of the start in the first line in the stanza in the correct version which runs pun maos and the third line that starts with pun uwa. The scribe saw this error in time to correct it.

Add. 12310, f. 93r. An entire stanza was crossed out and red lines added above. Why it is wrong is a puzzle. It is not a repetition of a stanza before or after it, or indeed anywhere to be found in its vicinity.

Add. 12310, f. 61v. The last line of the stanza was written no fewer than three times, of which two were deemed wrong, while the third was accepted. To make things even more clear, each letter in the incorrect line was provided with the vowel sign /i/ making the letters unreadable because many carry two vowels. This is a way of indicating corrections that we see in carefully executed copies but in this manuscript only in a few cases.

Other types of errors

Add 12310, f. 94r. In this case, corrections have been made in the margin, and then they too were rejected and marked as wrong. 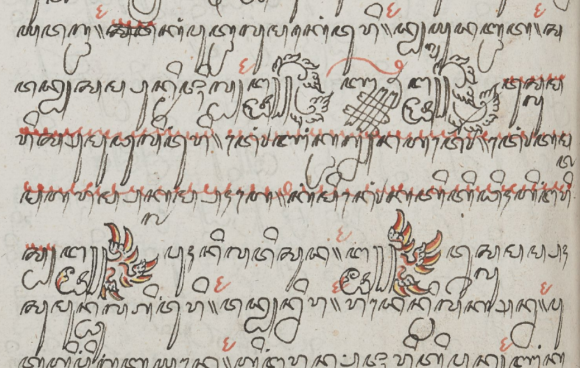 Add. 12310, f. 121v. A new canto has started in the second line in this illustration, but the first stanza was rejected, and was crossed out with red error lines added above. To make things quite clear, a new decorative canto indicator (pepadan) was repeated, and coloured with the name of the poetic metre puh nila wisuda which is apparently an alternative name for the metre mijil. It is not clear where the erased text comes from as it has not been encountered elsewhare in this manuscript.

Add 12310, f. 171r. This is one of the rare occasions when a correction was made in another hand in the margin.

The copy of the Sĕrat Jaya Lĕngkara under discussion is an enigmatic manuscript. Even though it contains many fine illustrations, it is literally littered with minor and major mistakes that were addressed by the scribe and others. This combination of many textual errors with finely executed illuminations is a curious phenomenon and needs more detailed research as to why this happened. The fact that the scribe was aware of the traditional unobstructive way of indicating mistakes, but only used this occasionally in favour of crude crossings-out, suggests to me that the resulting manuscript was not intended to be a cherished final product. 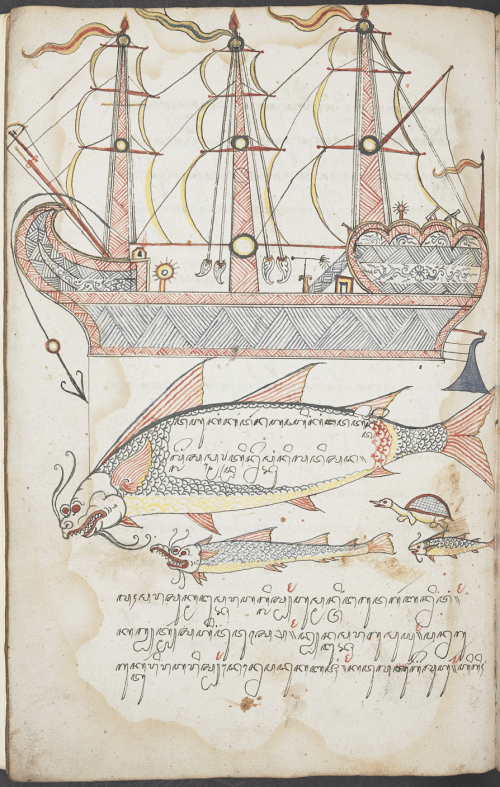