Among the literary treasures of Thailand is the famous work Chindamani, "Jewels of Thought". The oldest version of this work is attributed to the seventeenth-century monk and court astrologer Horathibodi of Ayutthaya. It is thought that he compiled it around 1670 in Lopburi for King Narai, but he may have drawn inspiration and knowledge from older texts. Although the original work has not been preserved physically, copies of it are held in numerous archives and libraries in Thailand and abroad. Chindamani is a treatise about "writing", covering vocabulary, orthography, grammar, loan words from Pali, Sanskrit and Khmer, literary styles and poetry conventions.

Thai poetry is shaped by a combination of foreign influences and the 'poetic' character and tonality of the Thai language. Thai poets were inspired by foreign languages like Pali, Sanskrit and Khmer, but the nature of the Thai language governs, selects and adapts these imported influences. Poets in the past explored the possibilities of the language and indirectly established new conventions for the following generations. This can be seen in the techniques of word-play and punning as well as the many variations of Thai verse forms known as Konlabot. 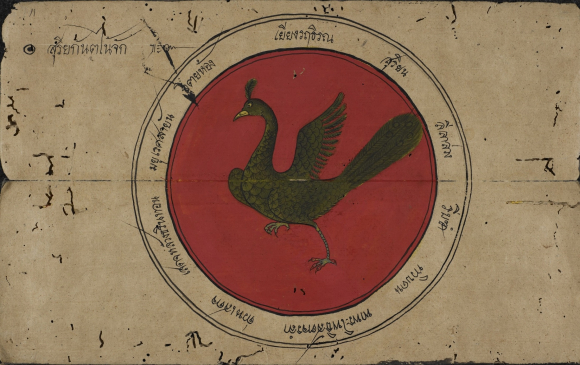 A small treasure in the Library's Thai, Lao and Cambodian collection is a nineteenth-century folding book (samut khoi) made from mulberry paper with examples of illustrated Konlabot poetry. The poems are written in black ink, in a very accurate hand, on eighteen folios. Twelve folios contain coloured illustrations, most of which have Konlabot verses written in a geometric pattern. The size of the book is 340 mm x 107 mm, rather small compared to the larger Thai folding books containing Buddhist texts. However, this is the usual folding-book size for literary, historical and other secular topics. The first part of the book contains nine poems without illustrations and two poems accompanied by illustrations, including one about the popular folktale Kraithong, a story of a brave man who rescued a young lady after she was abducted by a crocodile and held captive in a cave. The second part contains poems which are embedded in paintings of fine quality, like for example two striking symbolic illustrations of the sun (above) and moon (below) which contain verses in praise of Suriya, lord of the sun, and Chandra, lord of the moon. The moon with the white rabbit is shown together with the demi-god Rahu who is trying to swallow the moon – a traditional explanation of a lunar eclipse. 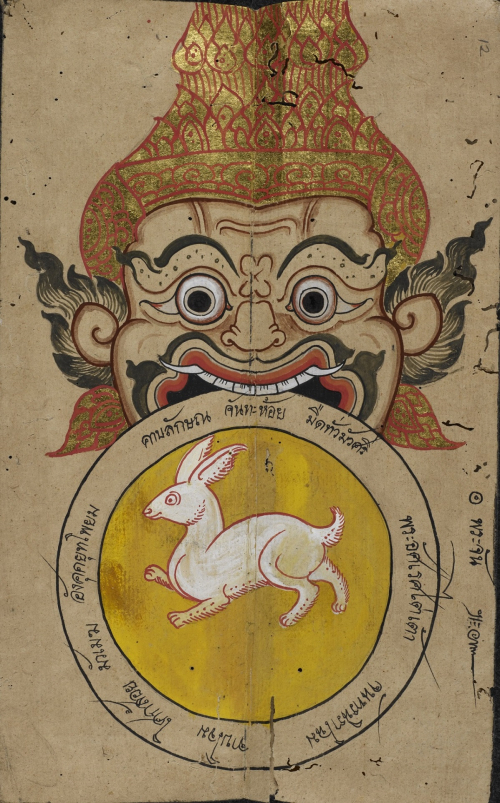 Historically, Thai poets have cherished and explored the possibilities of language through the invention of various stylistic methods of Konlabot. In many major literary works in Thai language - like Lilit Phra Lo, Yuan Phai, Samuttakhot Khamchan, and Anirut Khamchan - there is an abundance of Konlabot poetry to break up the main text, or to poetically "illustrate" the main text. This serves the purpose of highlighting the mastery of an author and their ability to intensify the emotions in their work. Much dedication and effort are given to the novelty of imagery that can appeal to the feelings and the aesthetic senses of audiences. Therefore, the refinement of diction and embellishment through poetry is highly valued. 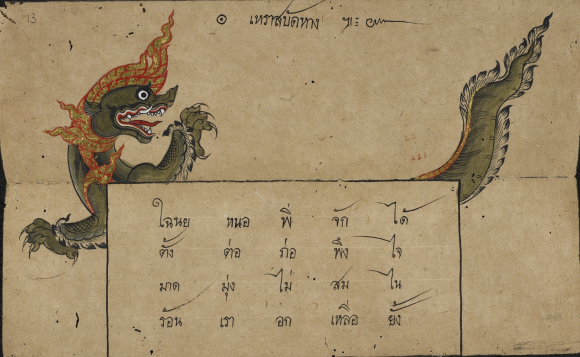 These ten types of Konlabot are also mentioned in an inscription from the treatise of Khlong Konlabot found at Wat Phra Chetuphon (Wat Pho) in Bangkok, the temple considered as the first university in Thailand founded by King Rama III. 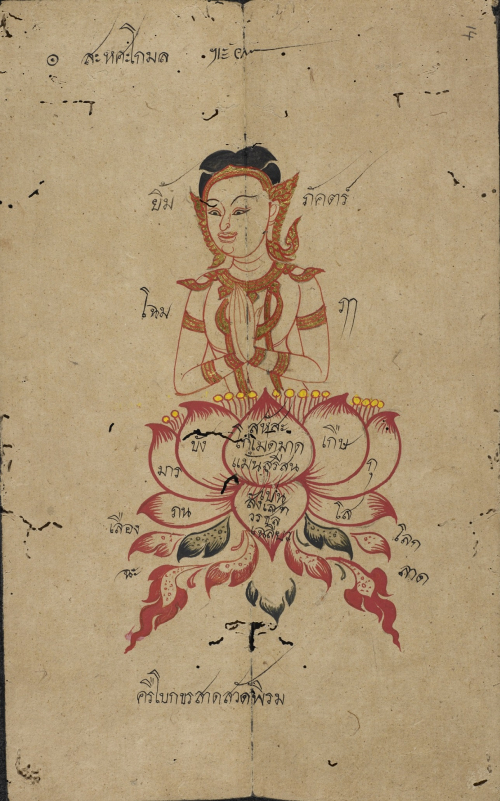 From the different types of Konlabot mentioned above it is obvious that the name of each type of Konlabot implies certain characteristics corresponding to the name. For example, words or verses can be arranged in a certain geometric pattern, which is then embedded in an illustration. The reader needs to know the "code" to decipher the poem that is represented in the geometric shape. This geometric structure subsequently affects the sound pattern and the rhythm of the poem. Usually the poet includes certain key-words together with a suggestive title which enable the reader to decode a poem. Thus, Konlabot poetry can also be used to cover taboo topics, or to send secret messages to lovers, like for example the erotic poem about the Bird in the cave below. The title is a symbolic expression for love-making, and the poem elaborates on the poet’s desire for his lover, a gorgeous lady with a playful, chatty voice and a face bright and sparkling like a diamond. 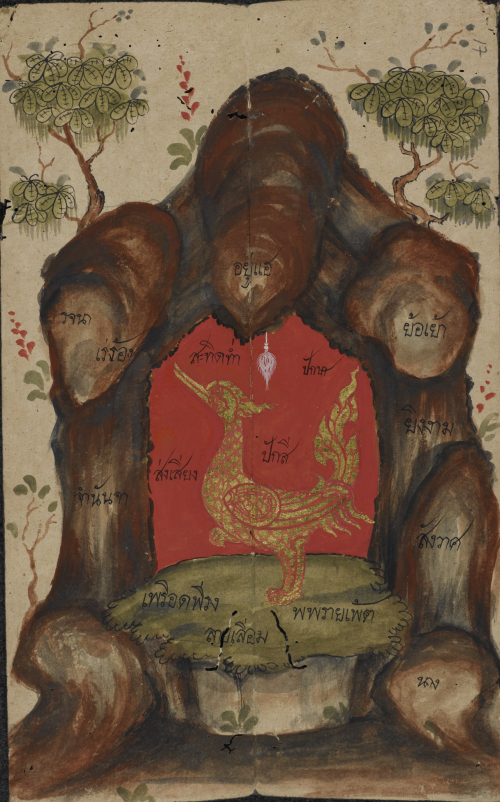 The idea of poetry as a critical exploration of language is highlighted in the famous eighteenth-century work Klon Konlabot Siriwibunkiti, which contains eighty-four variations of versification. While this text is seen as evidence of the established importance and recognition of Thai written poetry since the Ayutthaya era (1350-1767), it also shows that the Konlabot genre is proof of the Khmer influence in Thai poetry. Like the Kaap, another popular form of versification in Thailand, Konlabot has exact counterparts in Khmer language. Generally, Thai classical literature embraces Khmer and Sanskrit loanwords, especially older compositions from before the nineteenth century.

I would like to thank Prof. emeritus Cholthira Satyawadhana, former Dean of School of Liberal Arts, Walailak University, for her advice and help in decoding poems in the Konlabot manuscript that is subject of this article.