A comparison between Rustam and Arjuna

The British Library has a rich collection of Persian manuscripts, including finely illustrated and decorated manuscripts of the Iranian national epic, the Shahnamah of Ferdowsi, but also including a copy of the Razmnamah, the Persian version of the Sanskrit epic, the Mahabharata.

In this blog, I would like to highlight the similarities between two major heroic characters in the Shahnamah and the Mahabharata: Rustam and Arjuna. Common features and episodes involving these characters can be seen as an example of cultural exchanges between Iran and India which date back to ancient times, even though there is still no consensus among scholars about the extent of the influences of thought and culture of the two nations on each other. Due to the different cultural and geographical environments in which the epics were formed, like any other stories with common roots, the stories of Rustam and Arjuna also have differences. But these differences cannot prevent us from seeing the similarities between the two characters, indicating that the stories must have originated from a common source.

The Mahabharata, which is attributed to the sage Vyasa, was written over centuries and focuses on the war between two families of cousins, the Pandavas and the Kauravas, who compete for the throne of Hastinapur. The Pandava brothers were Yudhisthira, Arjuna, Bhima, Nakula and Sahadeva.

Like the Mahabharata, Iranian epic stories were also narrated orally over centuries by storytellers, although the Shahnamah was written by the poet, Ferdowsi. As a Muslim poet, Ferdowsi homogenized the stories and emphasized the belief in one god in the spirit of the stories. Nevertheless, the presence of a few powerful ancient gods – such as Zurvan, Mithra, and Anahita – in the deep layers of the stories is still discernible. Many scholars have compared characters of the Shahnamah with gods and goddesses, and Zal, the father of Rustam is one of them. There are obvious vestiges of the worshiping of other gods in the Shahnamah; for example Fereydun and Zal are Sun worshipers.

In the discussion below, I have compiled some of the most striking examples of similarities and parallels in the stories about Rustam and Arjuna, with illustrations from two Mughal Persian manuscripts in the British Library’s collection: a late 15th-century copy of the Shahnamah with early 17th-century paintings (Add 5600) and a copy of the Razmnamah of 1598 (Or 12076).

Like Arjuna in the Mahabharata, Rustam is one of the most important heroes in the Shahnamah and the central character of many stories. Arjuna was born to the god Indra, and Rustam is the son of Zal and Rudabah. 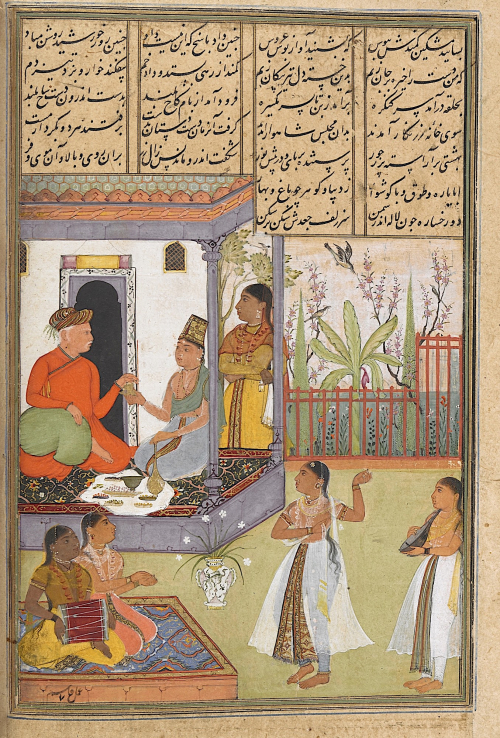 Zal was born with white hair, which scared his father Sam enough to abandon his child, thinking he was a devil. In the Mahabharata Pandu, Arjuna’s father was also born extremely pale.

In an interesting article, Mihrdad Bahar has highlighted the similarities between Rustam and Indra, the god with whom Kunti, Arjuna's mother, conceived her child. Bahar notes that Indra and Rustam are both born by caesarean section, they are both large, both eat a lot and drink too much wine, and both have a club. In the Mahabharata, these traits are also given to Bhima and Arjuna, but as mentioned above, Arjuna was born of Indra.

Rustam and Arjuna both marry a woman outside their city or land. In the Shahnamah, Rustam marries Tahminah, the daughter of king of Samangan, and returns to Sistan after spending a short time with her. Tahminah gives birth to a baby boy and calls him Suhrab. Suhrab later tries to invade Iran and unknowingly fights with his own father, and is eventually killed by Rustam. 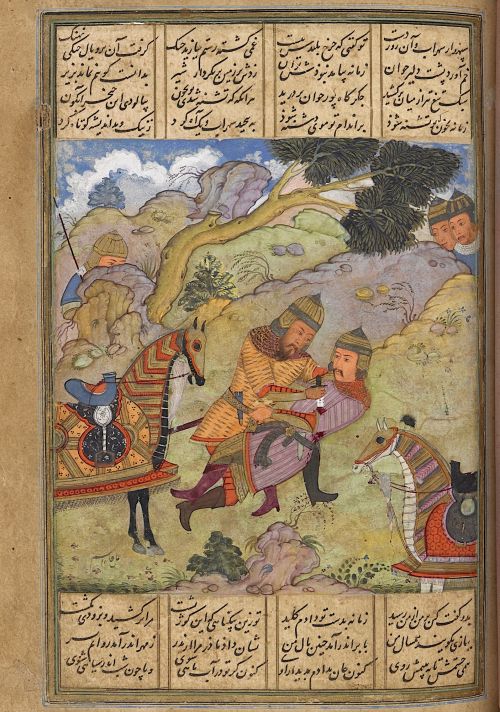 In the Mahabharata, Arjuna marries Chitrangda, Raja Manpour's daughter. Raja Manpour agrees to the marriage on the condition that if his daughter becomes pregnant, the child will stay with him, which Arjuna accepts. Like Tahminah, Chitrangada gives birth to a baby boy, called Babruvahana. In time, Babruvahana too fights with his own father, Arjuna, although unlike Rustam, Arjuna does indeed recognize his son.

In both stories, the surviving hero goes in search of a magic medicine to revive the wounded or killed hero. In the Shahnamah, this medicine is called Nushdaru and in the Mahabharata, Samjioni. Nushdaru is held by Kay Kavus, the king of Iran. Kay Kavus is afraid that Suhrab will join forces with Rustam after his recovery, and overthrow him from power. Therefore Kay Kavus refuses to give the medicine to Rustam, and Suhrab consequently dies. In the Mahabharata, however, when Babruvahana goes in search of Samjioni he manages to find it, and thus saves Arjuna from death. 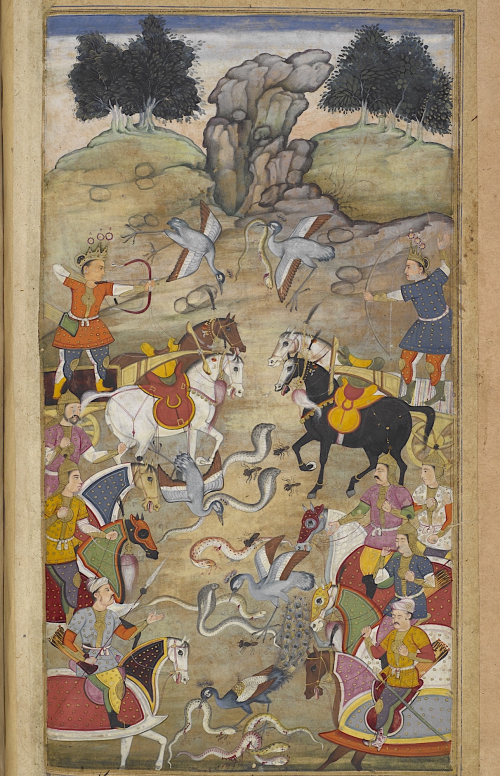 Battle between Babhruvahana, son of Arjuna, and the snakes, for Samjioni. Razmnamah, Mughal, 1598. Artist: Sangha. British Library, Or 12076, f. 71r

Despite the differences, both stories have a similar plot, involving the murder of a family member. In both epics, the fathers cause the war with their sons. Suhrab and Babruvahana both plea with their fathers to stop the war, but in both cases the fathers refuse. 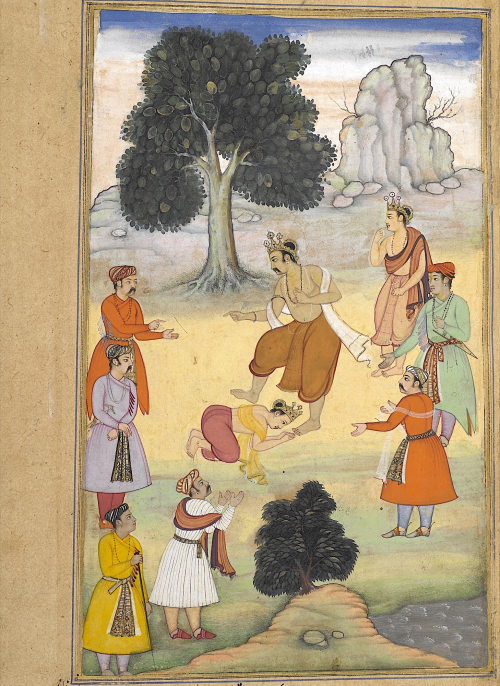 Another parallel in stories about Rustam and Arjuna is that both heroes kill their stepbrothers, with Arjuna killing Karna and Rustam killing Shaghad. 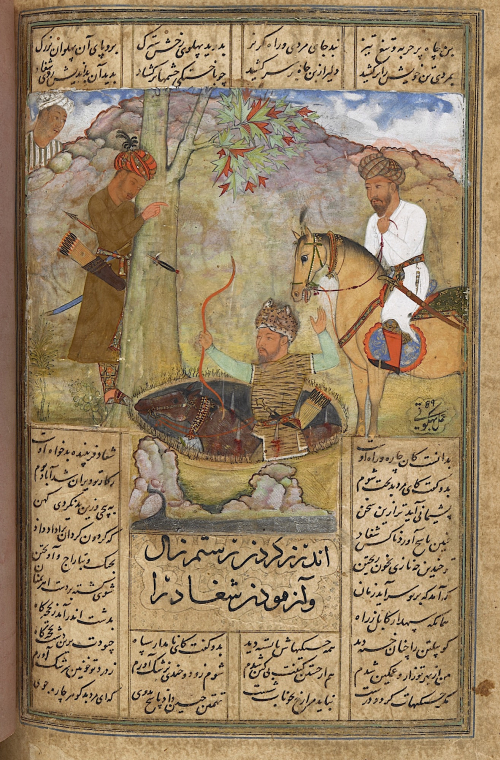 In the Shahnamah, Shaghad is born from another mother from Rustam. Meanwhile, in the Mahabharata, Karna has a different father from Arjuna, for before Kunti marries Pandu, she conceives Karna with Surya. In both epics, both stepbrothers join the enemies of their brothers. In the Mahabharata, Karna joins Kaurava’s army, and in the Shahnamah, Shaghad allies with the king of Kabul.

In both stories, Rustam and Arjuna also go on adventurous and dangerous journeys to help the king. In the Shahnamah, these journeys of Rustam are called Haft Khan ('Seven trials'). Rustam, who was a teenager at the time, was commissioned by Zal to go to Mazandaran to rescue Kay Kavus, the king of Iran. Kay Kavus had been deceived by the devil and had gone to Mazandaran, where he had been captured by a white demon. Rustam was forced to take a shorter route to rescue him immediately, but thereby had to confront seven dangers lurking on his way. 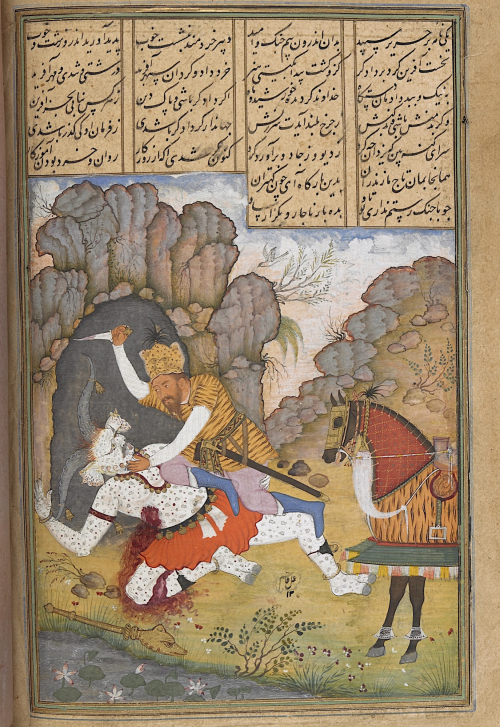 In Arjuna’s story, the hero's journey takes a year. To help his brother, Yudhisthira, Arjuna has to undertake a quest called Ashwamedha Yagya. As part of this formal undertaking, he must take a sacrificial horse into the country for a year to fight the opposition, and at the end return the horse to his brother's capital for sacrifice. It was during this trip that Arjuna got into a fight with his son Babruvahana and was killed by him, before being revived with the remedy Samjioni.

I am grateful to my colleagues Pasquale Manzo, Pardad Chamsaz and Arani IIankuberan for their comments.