After sporadic closures throughout 2020 and the recent national lock-down, we are pleased to announce the eagerly anticipated re-opening on 18th May of the stimulating and beautifully designed British Library exhibition, Hebrew Manuscripts: Journeys of the Written Word. 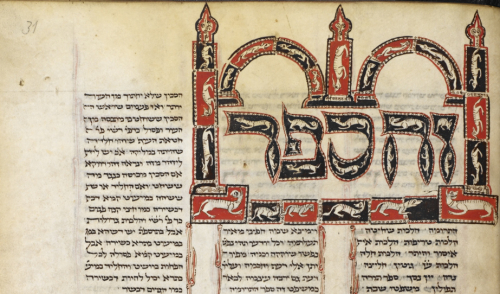 The 44 artifacts brought together for this exhibition convey powerful messages:

Spanning a millennium, most of the showcased objects come from the British Library’s outstanding, multi-faceted Hebrew manuscript collection. In the glass cases arranged in the centre of the gallery well-known iconic specimens rest alongside unknown pieces on display for the very first time.
Viewers are taken on a voyage of discovery through four sections clearly demarcated by thematic text panels. The Bible and beyond section presents core Jewish religious texts from around the world. 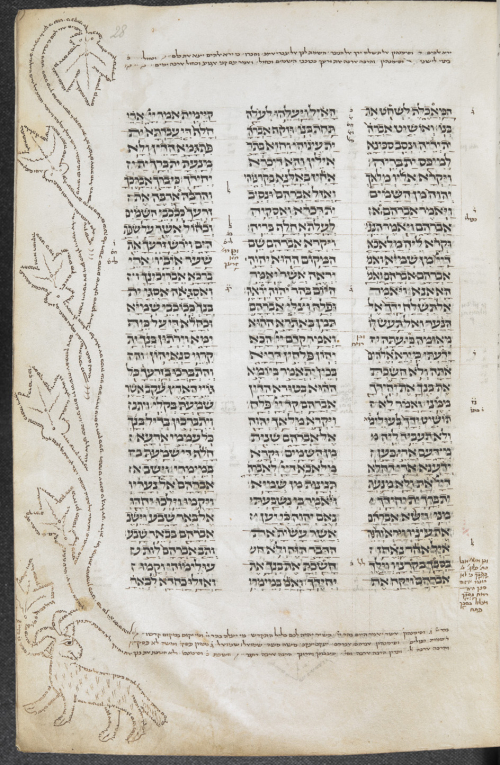 The beautifully wrought, 700-years old Duke of Sussex’s German Pentateuch is open at the story of Abraham sacrificing a ram instead of his son Isaac, captured here in a stunning micrographic design. Micrography is the weaving of minute lettering into abstract, geometric, and figurative patterns. It is a scribal practice unique to Jewish art that began in the 9th century CE in Egypt and the Holy Land and has continued to this day.

Also on view in this section is a 13th century incomplete copy of the Babylonian Talmud. The Talmud (literally ‘learning’) is the ultimate guide to religious law in Judaism. It is the largest corpus of Jewish knowledge, teachings and traditions accumulated over many centuries. The Babylonian Talmud, as its name implies, was compiled by scholars in Babylonia (present day Iraq). Although committed to writing around the year 500 CE, it continued to be edited for close to two centuries afterwards. During the Middle Ages and early modern period, the Talmud was the target of unrelenting condemnation and censorship by Christian authorities. Its allegedly offensive and blasphemous contents, led to frequent public burnings and the destruction of numerous copies. The copy on display has fortunately survived intact. 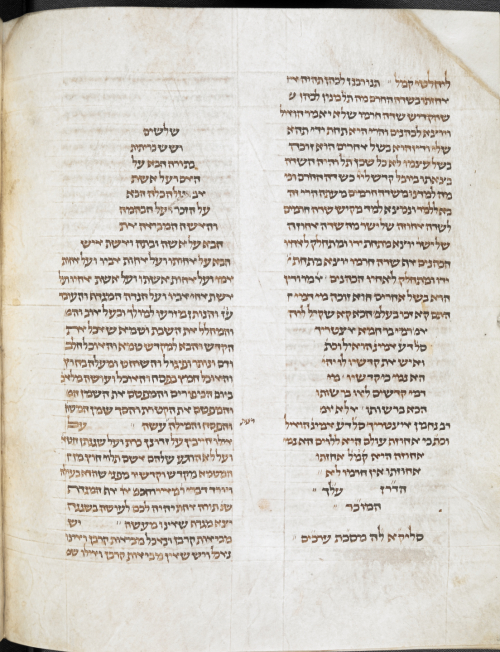 The Living together part of the exhibition offers glimpses of the interaction between Jews and non-Jews through historical accounts, legal documents, and literature. Among the splendid artifacts on display are Perek Shirah and Sefer ha-zikuk. Perek Shirah (Chapter of Song) is an ancient hymn of praise in which every created thing – from the animate to the celestial – thanks God for its existence. The praises are mostly biblical verses, often taken from the Book of Psalms. The right page illustration which shows 13 different animals, opens the chapter on the four-legged beasts. 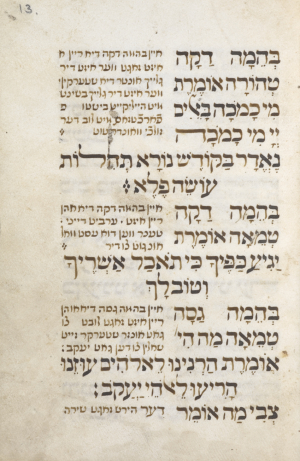 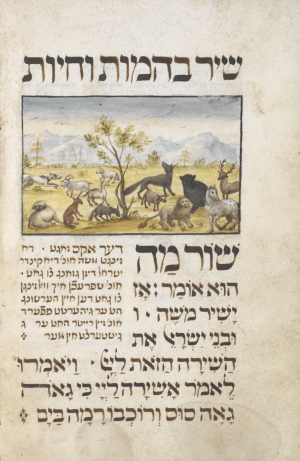 The pictorial style in this charming 18th century manuscript copy of Perek Shirah was evidently influenced by contemporary European art. The 5 miniatures and the Hebrew and Yiddish text in the manuscript are the work of Aaron Wolf Schreiber Herlingen of Gewitsch, a prominent Moravian scribe-illustrator who was active from 1719 to 1752, primarily in Vienna. Some 50 manuscripts created by him are known to have survived.

Sefer ha-zikuk (Book of Expurgation) is a manual of censorial principles and index of some 450 Hebrew works that allegedly contained morally detrimental, anti-Christian words and passages. Expurgators or revisers of Hebrew books, as they were sometimes called, deleted content they suspected referred to Christians in a negative way. On show is a 17th century manuscript copy of the original Sefer ha-zikuk Dominico Irosolimitano compiled in 1596 in Mantua. 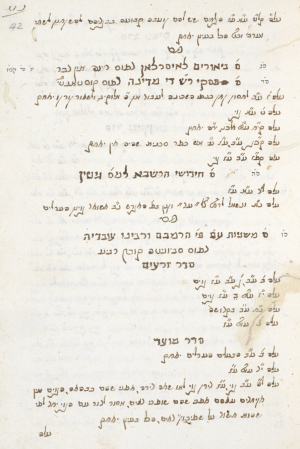 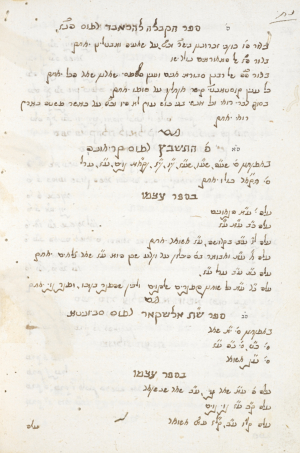 An established expurgator of Hebrew books in the service of the Catholic Church in Italy, Dominico Irosolimitano was a converted rabbi formerly known as Samuel Vivas (b. Holy Land 1550; d. Italy 1620). He was active in many Italian cities including Mantua, Milan and Rome, and was responsible for censoring some 20,000 Hebrew books and manuscripts during a career that extended over 40 years.

The Power of letters and words section reveals how Jewish kabbalah seeks to better understand the world and the Divine, and shows the centrality of the Hebrew alphabet in kabbalistic theory and practice.
One of the most prominent Jewish kabbalists in medieval Spain was Abraham Abulafia (b.1240- d. after 1290). He founded Prophetic Kabbalah, a unique mystical method to reach a state of union with God. Among his many works Haye ha-‘olam ha-ba (Life in the World to come), known also as Sefer ha-‘igulim (Book of circles) is particularly significant.
The circles in this 15th century manuscript copy of the work, contain Abulafia’s instructions for mystical meditation, reminiscent of practices in Buddhism and Hinduism. The techniques include: combining letters, reciting and visualising the Divine names, breathing exercises and poses. The reader is meant to enter each circle through an ‘entrance’ clearly indicated by a decorative pin-like marker at the top. Latin translations of Abulafia’s writings influenced many Renaissance Christian kabbalists, Giovanni Pico della Mirandola being one of them. 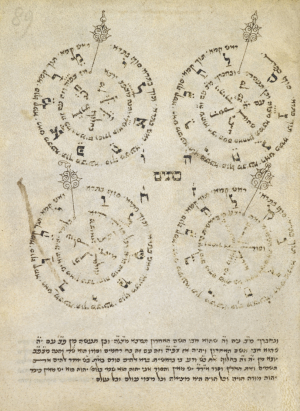 The exhibited small parchment amulet was created sometime in the 18th or 19th century. Its creases clearly prove that such amulets were folded and kept in the owner’s clothing, purse or in an amulet holder, and were carried around. 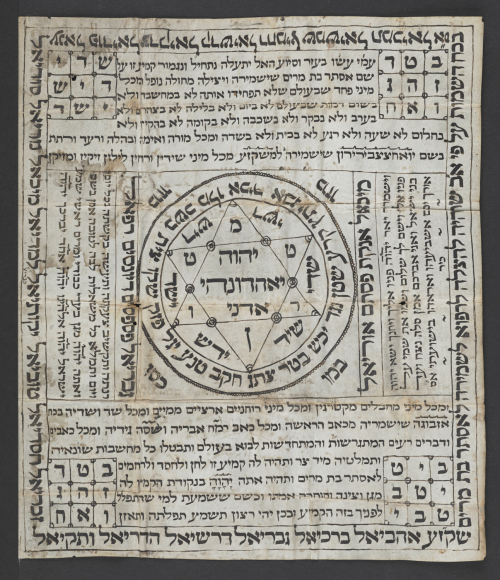 Amulets are believed to have magical powers, bring good luck and ward off evil, sickness, and other misfortunes. They have been used for centuries and are mentioned in the Talmud (the Talmudic term is kame’a). The most common types were for childbirth. In earlier times, high levels of childbirth and infant mortality led people to seek protection from the mysterious forces that seemingly had power over these events.

Hebrew amulets include symbolic designs, kabbalistic inscriptions, angels’ names, and permutations on the Names of God, as this specimen written for Esther bat Miriam shows. It was intended to guard her from all possible misfortunes at all times of day.

The final part of the exhibition – Science and scholarship - explores how Jewish thinkers have spread knowledge and have contributed new ideas to scholarship.

Living in communities scattered across the globe, many Jewish scholars were multilingual. At the crossroads of different cultures, they translated works between Arabic, Latin and Hebrew. Their most important contribution was transmitting Arabic and Greek ideas from these works to Christian Europe and their own co-religionists. 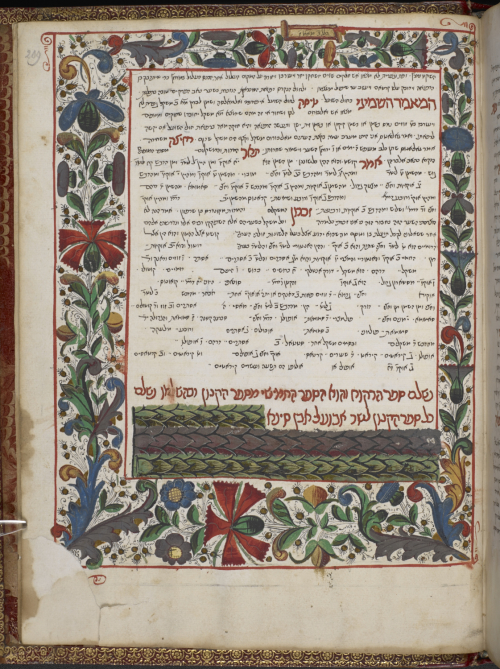 In 1279, the Italian Jew, Nathan ha-Me’ati, translated the 11th-century Canon of Medicine by Ibn Sina (known as Avicenna) from the original Arabic into Hebrew. The Canon was the most influential work of medieval medicine and the translation created new Hebrew medical vocabulary. This page from a 15th-century copy shows the end of Book V, which lists 650 recipes for medicines.

Another medieval Jewish scholar whose translations helped disseminate scientific ideas and knowledge was Jacob Anatoli (c. 1194-1256) who hailed from Provence, southern France.
In 13th century Naples, under the patronage of the enlightened Emperor Frederick II, Jacob Anatoli translated al-Farghani’s Compendium into Hebrew using both the original Arabic text and a Latin translation. The Compendium was an Arabic summary of Ptolemy’s Almagest, and it played a key role in spreading Greek astronomical knowledge in medieval Europe. Titled Sefer Alfargani be-hokhmat ha-tekhunah (Compendium of Astronomy and Elements of Heavenly Movements), the manuscript on view is a 16th-17th century copy of Anatoli’s Hebrew translation. 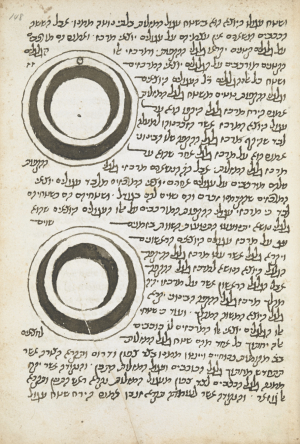 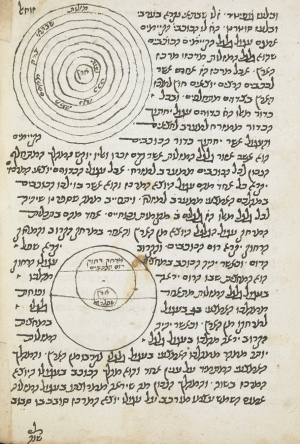 Hebrew Manuscripts: Journeys of the Written Word is open until Sunday 6 June 2021.

Follow this link for a 3D virtual tour of the exhibition.