Following the publication, in December 2020, of my blog ‘A cessation of plunder and piracy… for ever’, we received some interesting feedback from Dr James Onley, Director of Historical Research at the Qatar National Library, who are the British Library’s partners in producing the Qatar Digital Library. The blog discussed a particular treaty, which it referred to as the General Maritime Treaty, but Dr Onley suggested that this was not the historical name, and was instead of more recent provenance. This came as something of a surprise, as ‘General Maritime Treaty’ is also the name used in QDL catalogue descriptions. So I decided to investigate it further.

The treaty was produced in 1820 and was given the title, ‘General Treaty with the Arab Tribes of the Persian Gulf’. However, it is common for treaties to become known by a shorter, more memorable title. If this was the case for the treaty of 1820, then what was the short title that was used? A delve into the QDL shows that this is not a simple question to answer. 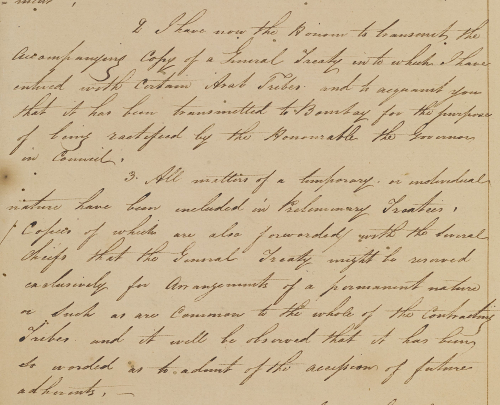 The image above shows part of a letter, dated 16 January 1820, from William Grant Keir, who signed the treaty on behalf of Britain. He wrote: ‘I have now the honour to transmit the accompanying copy of a General Treaty into which I have entered with certain Arab tribes’. He then added that ‘All matters of a temporary or individual nature have been included in Preliminary Treaties… with the several chiefs, that the General Treaty might be reserved exclusively for arrangements of a permanent nature or such as are common to the whole of the contracting tribes’.

Keir therefore called his treaty a ‘general treaty’ (the name is not consistently capitalised in the records) in order to distinguish it from the preliminary treaties he had concluded with individual rulers. In correspondence from the time it was sometimes referred to by this name, but also simply as ‘the treaty’.

By the 1830s, officials in the Gulf were also calling it the General Treaty of Peace, as the following extract shows:

‘Selections from the Records of the Bombay Government’, IOR/R/15/1/732, p. 314. This part is from a historical sketch covering the years 1819-1831 by Samuel Hennell, who was Assistant Resident in the Persian Gulf at this time.

This title increasingly became the accepted one. It was used in volume one of Charles Rathbone Low’s History of the Indian Navy, published in 1844. And this is what it was called by John Gordon Lorimer in his Gazetteer of the Persian Gulf, Oman and Central Arabia, produced in two parts in 1908 and 1915.

However, around the same time, another long-form title for the treaty began to appear. Specifically, the second edition of Charles Umpherston Aitchison’s A Collection of Treaties, Engagements, and Sanads Relating to India and Neighbouring Countries, produced in 1876, contained a copy of the 1820 treaty, but referred to it in the contents page as: ‘General Treaty with the Arab Chiefs for the cessation of plunder and piracy by land and sea’. This title would appear in subsequent editions of Aitchison’s Collection of Treaties, and would be replicated in other contexts as well.

From the contents of ‘A collection of treaties, engagements and sanads relating to India and neighbouring countries [...] Vol XI containing the treaties, & c., relating to Aden and the south western coast of Arabia, the Arab principalities in the Persian Gulf, Muscat (Oman), Baluchistan and the North-West Frontier Province’, compiled by C. U. Aitchison, IOR/L/PS/20/G3/12, f. 5v. This is from the fifth edition, published in 1933.

And what about General Maritime Treaty, the title used in my earlier blog post? Apart from one appearance in a historical memorandum produced in 1934, this title doesn’t seem to feature in the records or other material currently on the QDL. Furthermore, it seems to have come into wider use only after the turn of this century. It possibly has its origins in a Wikipedia article about the treaty which, according to the article’s history, was created in 2009.

It may be true, as this blog indicates, that there has never been a single, accepted way of referring to this treaty. However, the near absence of ‘General Maritime Treaty’ in the historical records means that we have taken the decision to remove it from our catalogue descriptions. Instead, as there is no consistently used short-form title, we have replaced it with the treaty’s original title, ‘General Treaty with the Arab Tribes of the Persian Gulf’. This is also what you’ll see now if you look at my earlier blog post.

But does this have any wider significance, beyond a cataloguer’s concern for getting a name right? Admittedly, it was unlikely to cause major confusion among users of the QDL. Nevertheless, I think this exercise has highlighted something important about the treaty, and about British imperialism in the Gulf more generally.

The treaty was created following a major British military intervention, and it reshaped the political map of the region in a way that is still evident today. Yet, from the start, the British were keen to downplay the extent and significance of their involvement. For example, just prior to the launch of the military campaign in 1819, the Government of India stated, ‘we are anxious to avoid all interference in the concerns of the Arab states beyond what may be necessary for effecting the suppression of piracy’ (IOR/F/4/650/17854, f. 386v - soon to be added to the QDL). Before and after this campaign, British officials insisted that their intervention was a limited one, aimed simply at restoring order and not at establishing British control in the region.

It is perhaps, then, no coincidence that the treaty created in 1820 was given an innocuous title, one that belied the force that lay behind it and the unbalanced relations it established with the rulers who signed it. It was, in fact, a watershed moment, marking the beginning of British imperial dominance of the Gulf. As this hegemony was strengthened over subsequent decades, it is telling that Britain’s preferred title for the agreement that formed its basis was the General Treaty of Peace.

The confusion, now and in the past, over the name of the 1820 treaty owes something to the indistinctiveness of its title. This, in turn, is a reminder of how Britain sought to frame its involvement in the Gulf, and of the need to look beyond this appearance to gain a more complete view of this history.