This week the Qatar Digital Library (QDL) reached a milestone: the upload of its two millionth image. The image comes from IOR/F/4/2050/93539 'Vol 7 Persian Gulf Affairs of-'. It joins a wealth of material already available, with descriptions in both Arabic and English, digitised as part of a partnership between the British Library and Qatar Foundation. The QDL, part of the Qatar National Library, contains audio-visual material, India Office records, maps, private papers, Arabic scientific manuscripts, photographs and drawings, all free to access and download.

Selected files from IOR/F/4 Boards Papers (1796-1858) are being digitised during Phase Three of the Partnership. Each file covers a specific topic and contains copies of letters sent from the British governments of Bombay, Madras, and Bengal in India to the Court of Directors of the East India Company in London. These copies went to the Board of Control, which oversaw the business operations of the East India Company. 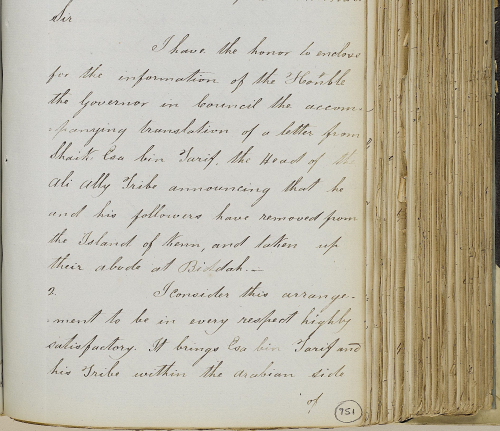 Most common are letters from the British Resident in the Persian Gulf but the files also contain correspondence received from local rulers, merchants and other British military and administrative personnel. They provide evidence of the British perspective on events in the Gulf, as well as the Company’s decision-making and internal discussions.

The highlighted file contains a letter from Captain Samuel Hennell, British Resident in the Persian Gulf, to the Government of Bombay [Mumbai] dated 7 December 1843. It reports the arrival of Shaikh ‘Isa bin Tarif Al Bin ‘Ali al-‘Utbi (referred to in the letter as ‘Esa bin Tarif’) at al-Bid’ (‘Biddah’ in the text) on the Qatar Peninsula, a settlement that now forms part of the capital Doha. This was a significant move: Shaikh ‘Isa had been a dominant presence in the Gulf for some years, and the British had been keeping an eye on him because of his independence, ability, and alliances with powerful figures around the region. His move to al-Bid’ brought his years of protracted wandering to an end.

View from the anchorage of al-Bid’, from a plan of the harbour of al-Bid’ by J M Guy and G B Brucks, drawn by M Houghton (British Library: IOR/X/3694)

Shaikh ‘Isa was chief of the Al Bin ‘Ali tribe formerly based at al-Huwailah, a town on the coast of Qatar. His strength had grown steadily until 1835 when it threatened the Shaikh of Bahrain, ‘Abdullah bin Ahmad Al Khalifah, who nominally ruled the peninsula. Shaikh ‘Isa enjoyed the support of his own tribe and that of the neighbouring Wahhabi forces. They combined to present a formidable challenge to Shaikh ‘Abdullah. 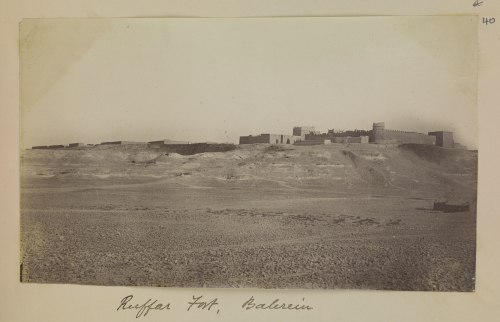 Eventually both sides agreed to the mediation of the Imam of Muscat, Sayyid Saʻid bin Sultan Al Bu Saʻid. He proposed that the Al Bin ‘Ali leave al-Huwailah for Bahrain, where their safety would be guaranteed. However, before this agreement was put into effect a dependent of Shaikh ‘Isa was killed. When Shaikh ‘Abdullah refused to pay reparations, Shaikh ‘Isa and his followers moved to Abu Dhabi.

It was at this point that the British became interested in Shaikh ‘Isa’s movements and activities. Their chief concern was to limit naval warfare in the Gulf, thereby protecting maritime trade routes. Hostilities between the Ali Bin ‘Ali and the Shaikh of Bahrain continued to threaten merchant shipping. When Shaikh ‘Isa requested permission to lead an expedition against Bahrain, the British refused. Shaikh ‘Abdullah’s request that he be allowed to force Shaikh ‘Isa and his followers to return to his control was similarly rejected.

While in Abu Dhabi Shaikh ‘Isa cultivated an alliance with the Imam of Muscat, Britain’s foremost ally in the region. In 1837 the British noted that ‘Isa had played a key role in the Imam’s capture of Mombasa. Also during this time, despite the British prohibition on attacking Shaikh ‘Abdullah, Shaikh ‘Isa conspired (unsuccessfully) to overthrow him with the cooperation of the Governor of Egypt, Khurshid Pasha.

In 1839 Shaikh ‘Isa left Abu Dhabi, partly due to the scarcity of resources for his tribe. He initially planned to move to Wakra on the Qatar Peninsula. Both the British and Shaikh ‘Abdullah were happy with this arrangement but the British were unwilling to guarantee that Bahrain would not attack Wakra. Consequently Shaikh ‘Isa moved instead to the island of Kish (Qais, referred to as ‘Kenn’ in British records) on the opposite northern coast of the Gulf. 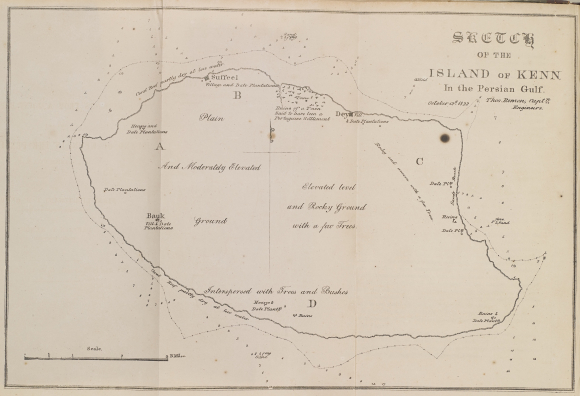 The British had previously drawn a ‘restrictive line’ along the length of the Gulf. This created a ‘neutral zone’ to the north, in which no armed vessels would be tolerated, thereby protecting commercial shipping in that area. Kish is located north of this line; the Qatar Peninsula is to the south. Meanwhile, the British were increasingly concerned by the power vacuum developing in the Qatar Peninsula. They were unconvinced that the most powerful man on the Peninsula, Salmin bin Nasir al-Suwaidi from the Sudan tribe, was strong enough to keep the peace or deter individuals from aggression against ships in the Gulf.

Shaikh ‘Isa was not content to remain at Kish indefinitely. He saw an opportunity of returning to the Qatar Peninsula by helping Shaikh Muhammed bin Khalifah Al Khalifah overthrow his great-uncle ‘Abdullah in Bahrain. The takeover was successful. In a letter dated 18 July 1843, the British Resident referred to Shaikh Muhammed and Shaikh ‘Isa as the ‘de-facto Rulers of Bahrein’.

The British were unconvinced that the alliance between the two rulers would last. They knew that Shaikh ‘Isa was also cultivating an alliance with the ruler of Abu Dhabi. His move to al-Bid’ in December thus led the British to welcome a new era of stability for the region. The move brought him south of the ‘restrictive line’, which meant that any aggression between him and Bahrain would not affect shipping in the Gulf. 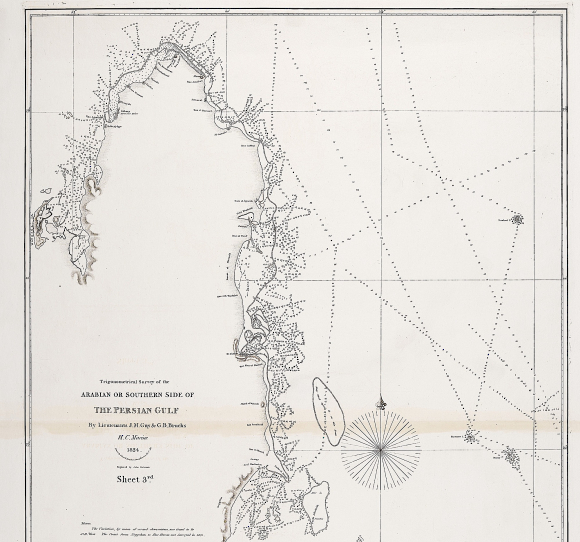 Survey of the southern side of the Gulf, including the Qatar Peninsula, (British Library: IOR/X/3630/20/5)

He did not have long to enjoy his return. As before, his success on the Peninsula was the envy of Bahrain and Shaikh Muhammed wanted to bring him firmly under his control. In November 1847 a battle near Fuwairit (local accounts say Umm al-Suwayyah, near Al-Khor) ended in Shaikh ‘Isa’s death. ‘Isa showed firmly that Bahrain’s control over Qatar was unsustainable, and laid the foundation for the recognition of Qatar as an independent country. After Shaikh ‘Isa’s death, the power vacuum in the Peninsula was filled by the Al Thani family who had been the dominant family in Fuwairit.